If you’ve dared to wander into the comments on various LEGO® social media posts over the last year or so, you may have been greeted with endless mutterings about a 501st Battle Pack. Despite having nothing to do with the particular posts these comments are tagged on, a passionately consistent band of LEGO fans have been making it clear, they want a set featuring 501st clones. Earlier this week they got their wish, with the announcement of a new Star Wars set featuring 501st troopers, a BARC speeder and AT-RT Walker. Ever since the internet has been awash with celebrations akin to the end of Return of the Jedi, just with more whooping. But the 501st have graced LEGO sets before, and this new set has more than a passing resemblance to a LEGO set releases back in 2012. So I thought it was an apt time to dig it out and take a look back in the first BricksFanz Retro Review! Begun the review has…

Battle the Separatists on the agile AT-RT!

The 501st Clone Trooper is on patrol with Star Wars™: The Clone Wars™ edition Yoda and the powerful AT-RT™ walker when he spots a Commando Droid captain and Sniper Droid. Use the AT-RT’s swiveling laser cannon to attack the Droid! Take your blasters out of the AT-RT’s weapon storage compartment and open fire! Recreate your favorite scenes from the Star Wars: The Clone Wars animated TV series! Includes 3 minifigures with assorted weapons: Clone Wars edition Yoda, 501st Clone Trooper and Commando Droid captain. 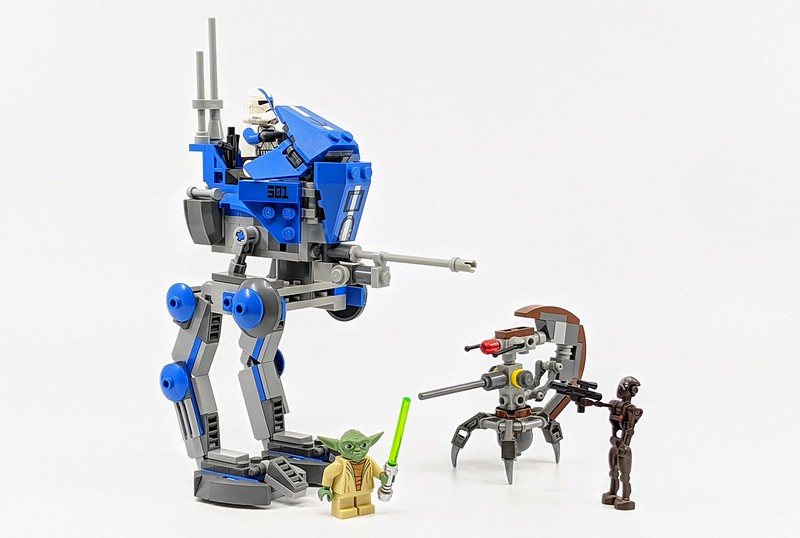 Just like the newly announced set, this older set features an AT-RT or All Terrain Recon Transport is your preference. This is a single unit walker, which is inspired by the iconic AT-AT and AT-ST imperial walkers from the original trilogy. The vehicle first appeared in Revenge of the Sith, which also made the 501st canon. However, this appearance of the AT-RT is influenced by the Clone Wars TV show. This means the walker is a mix of blue and grey with a splash of white. 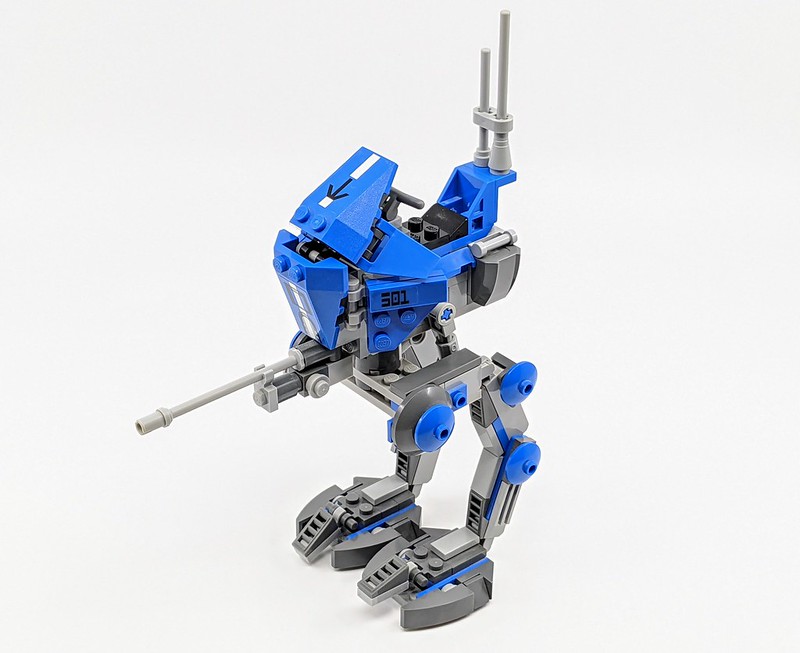 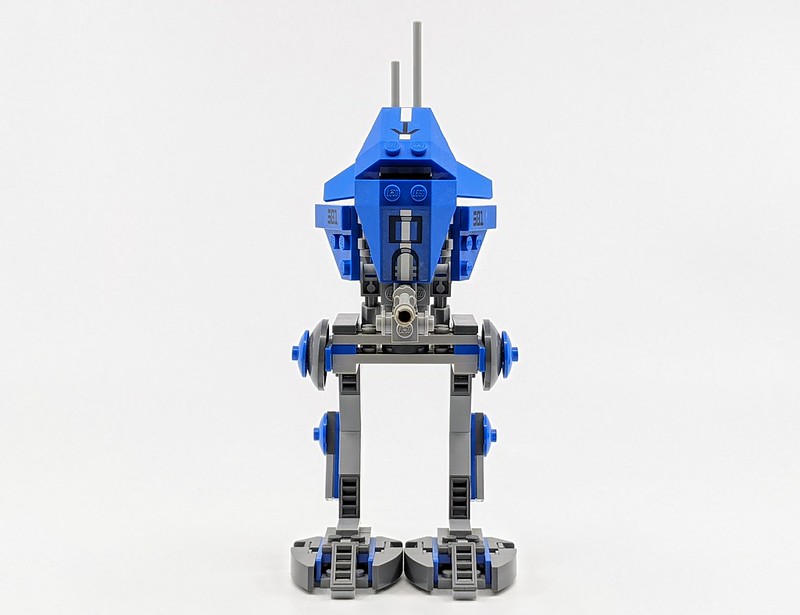 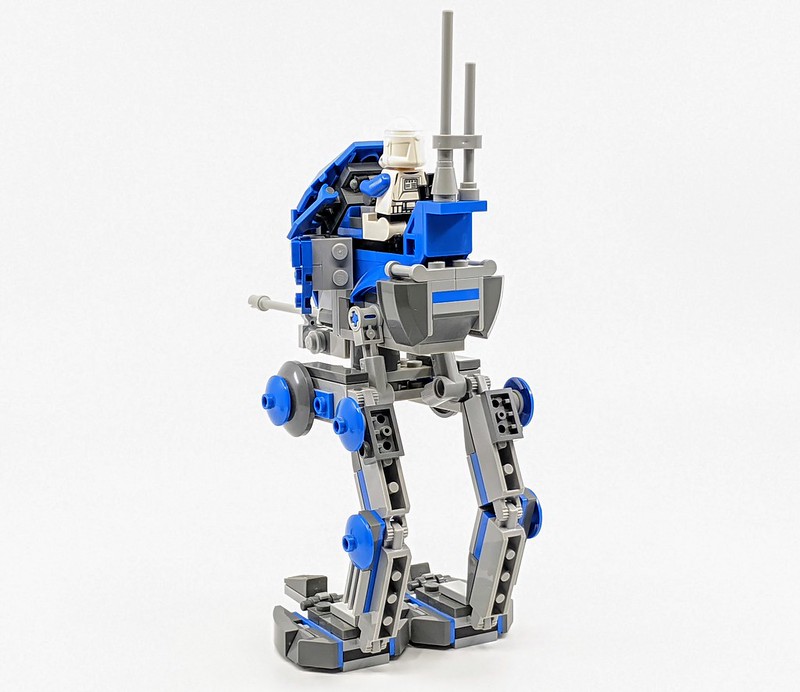 There are a few points of movement, with both of the walker’s legs able to be moved. But due to the design of the set, it can only stand when both legs are parallel. You can also twist the front blaster canon, both of these elements lack much play functions. There are a few stickers used for extra detail, the most notable are the 501st troop branding. 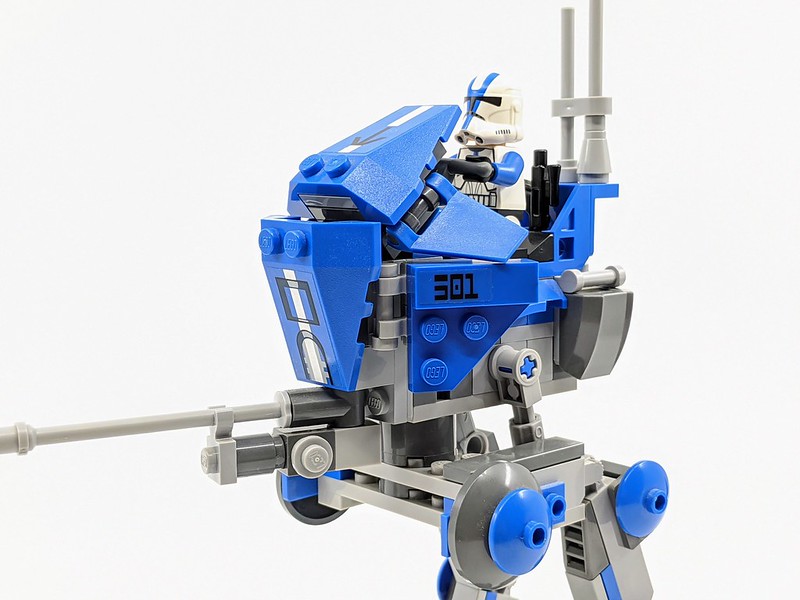 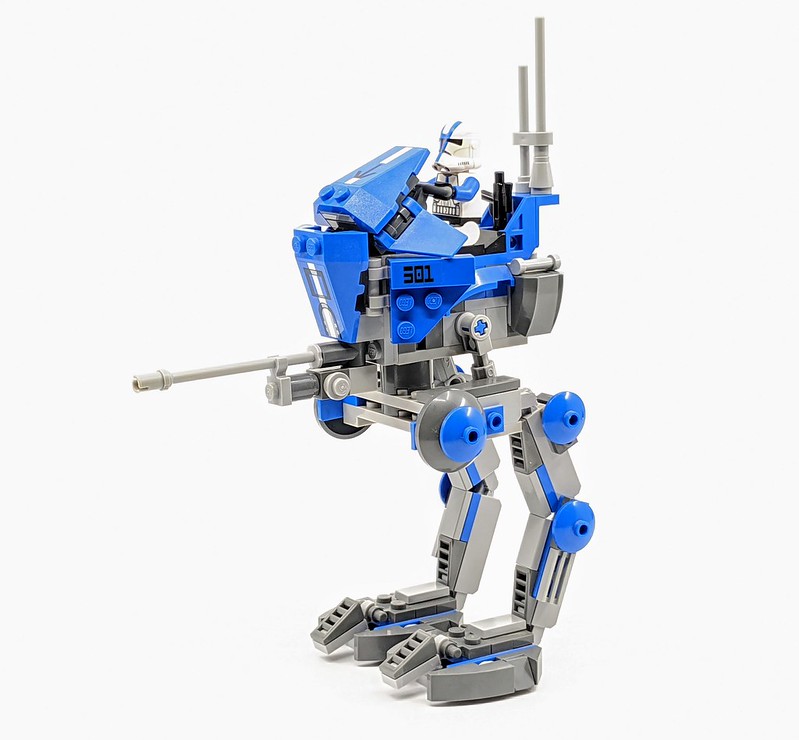 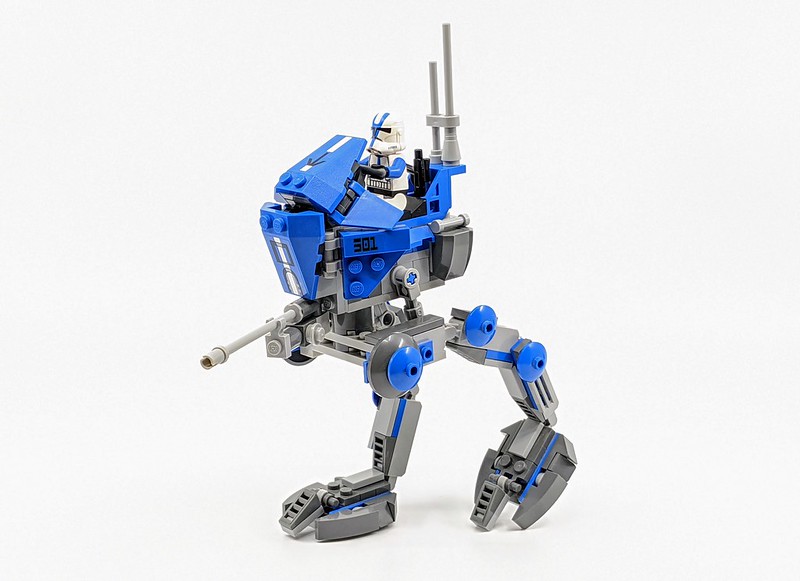 The other buildable aspect of the set is a Droideka, these played a big role in the prequel films and Clone Wars TV shows, so it makes sense to have one includes in the set. The look of Destroyer Droid is captured nicely, although the build is a little weak in places. 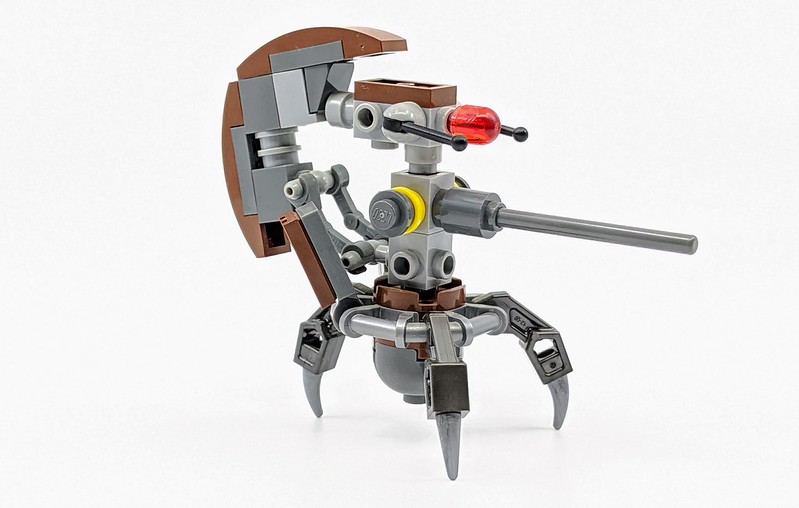 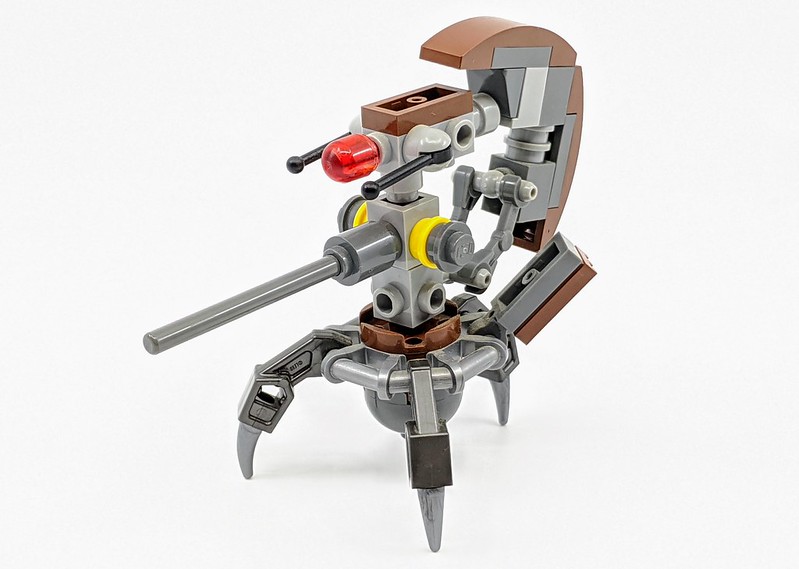 As mentioned above the set is based on the animated Clone Wars TV, so the Minifigures have a distinct appearance. Master Yoda looks a little more animated than previous versions and is probably the only Minifigure which looks close to the TV show version. There is also a Captain Droid Commando Droid. This looks a little like the generic Battle Droids, but is slightly taller and has a different sort of head. This particular Droid has only appeared in this set. 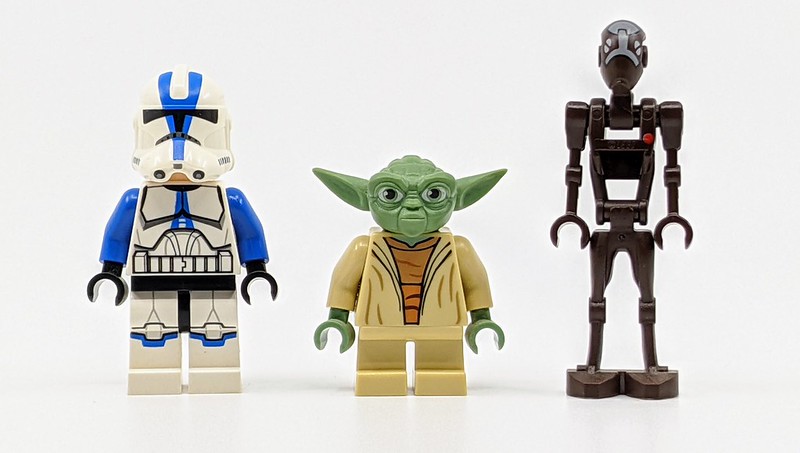 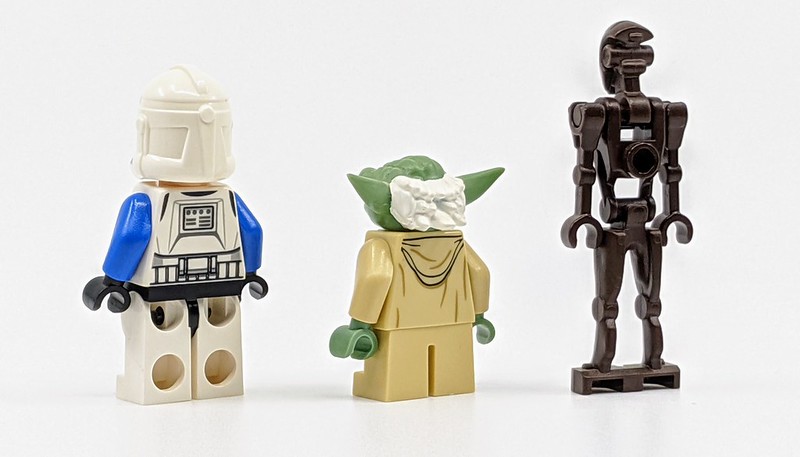 Which leaves the sole Clone Trooper, who unfortunately shows the most influence from the animated style used for the Minifigures. This results in this monstrosity. The odd big-eyed look doesn’t match that of the animation used in the TV show or the iconic appearance used for most Minifigures. Thank goodness he has a helmet. 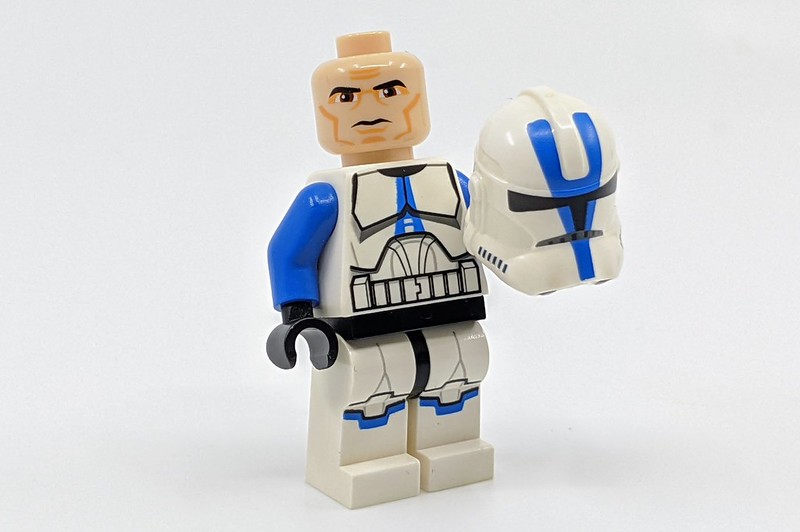 The new 501st set, which you can check out below, isn’t a mere copy of the set, detailed above. But they do share a lot of similarities. The AT-RT is extremely similar in appearance, with a few tweaks and different elements used. For just a little more extra on top of what this set costs, the new 501st set adds a completely new vehicle, increases the Clones to four Minifigures and adds two clankers. Although some of the Droid elements have been dropped the additional parts definitely warrant the slightly higher set price. 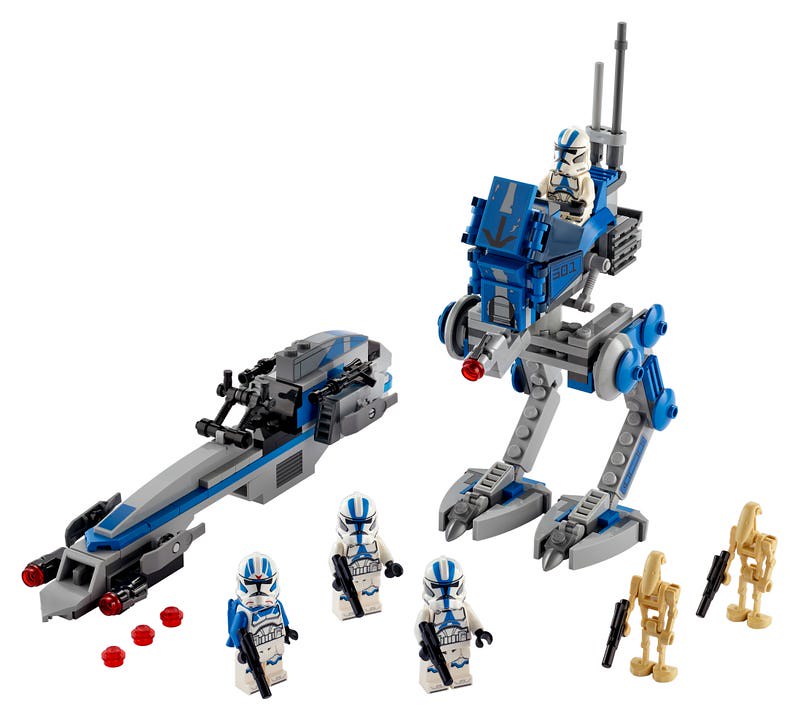