It’s that time of the year when the search for the latest series of LEGO® Minifigures begins. On January 1st, the 21st series of the popular collectible LEGO Minifigures arrive and things are a little different this time around. There are only 12 characters to collect and the box size has also changed to reflect this. But are these 12 new faces worth tracking down? There’s take a closer look at Series 21 LEGO Minifigures. 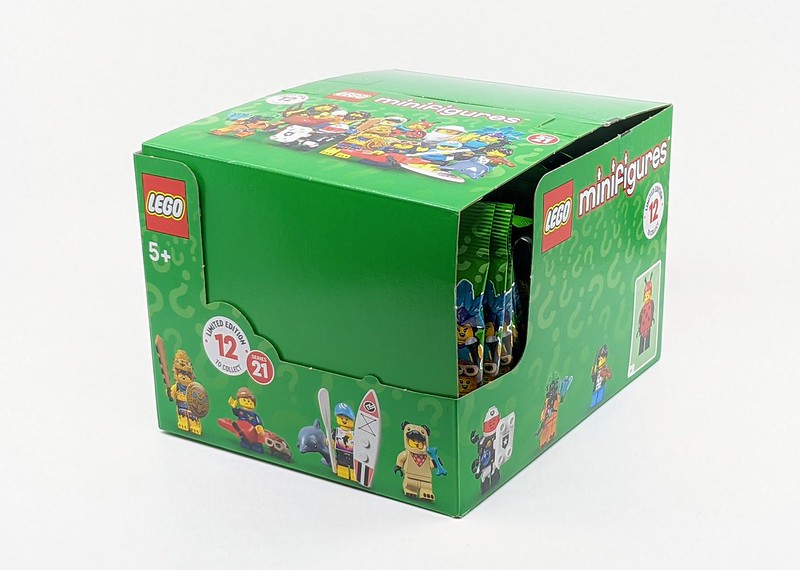 As mentioned above there are only 12 characters to collect this time around and this has seen a slight change to the box size and distribution. The box I received for review contained 36 packs, down from the usual 60. Of these packets, the box resulted in three full series. There are two benefits to this change, it will obviously cost less to purchase a full box and you can spend the cost with friends knowing you’ll each get a full set. Although not officially confirmed, most boxes should follow this distribution pattern, however, it cannot be guaranteed. 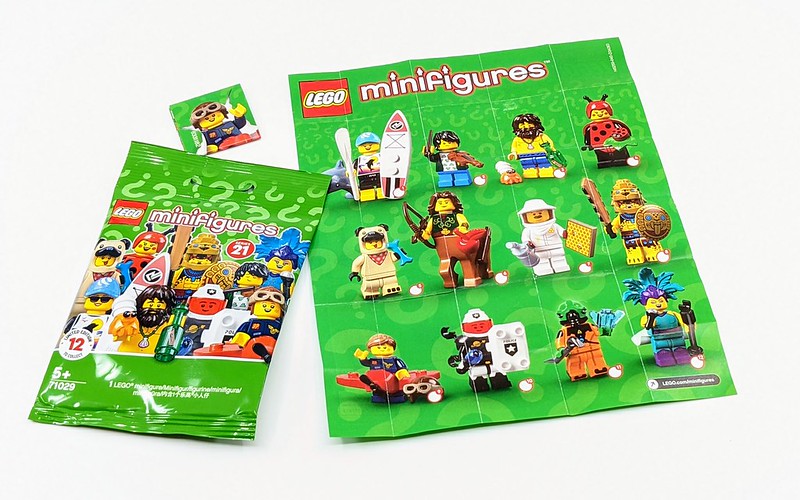 One of the biggest Minifigures to be featured in any series so far is the Centaur Warrior, which technically should be called a Centauride. This is part horse, part lady, this Minifigure uses the same horse body part introduced in the Harry Potter Forbidden Forest. It’s a slightly lighter colour, so current unique to Series 21. The upper part of the Centaur is reminiscent of the Princess Verda Minifigure from the Kingdoms sets. 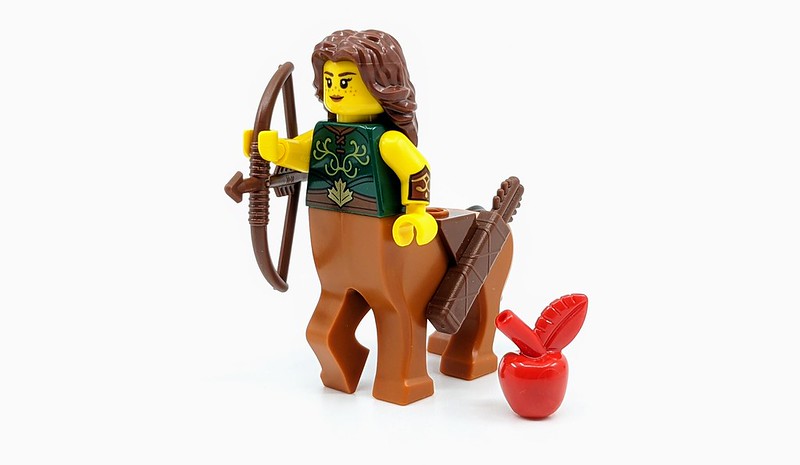 Possibly inspired by Tom Hanks in Castaway, the Shipwreck Survivor is a great little Minifigure. The rugged hair and beard combo is the perfect element for this character. His long time at sea has left him with little clothing apart from a pair of torn shorts. The dual-mould legs have been used perfectly here. Despite the lack of clothes, the character has some fun printed detail dotted about his person, including an anchor tattoo on his arm and a funky shell neckless. His attempts to get help are portrayed by a message in a bottle and although he doesn’t have a ball to talk to, he does have a cool hermit crab, which uses a new element for the body of the crustacean. 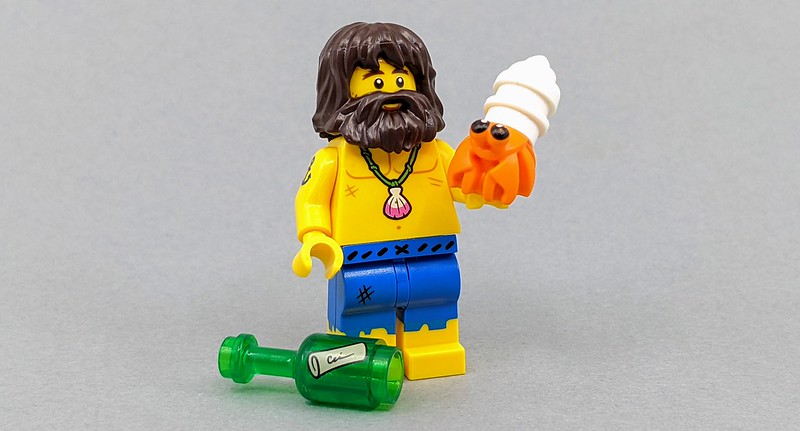 Costumed characters are always quite popular and this series expands the gang with the dog canine offering. The pug uses a brand new headwear element, which I can’t see being used beyond this collection. Although the body of the character is quite plain beyond a curly tail and funky neck scarf, I love the faces. There are two both of which feature a little tongue poking out. The use of the short articulated legs adds to the charm of the character, as does the recoloured bone element as a chewy toy. 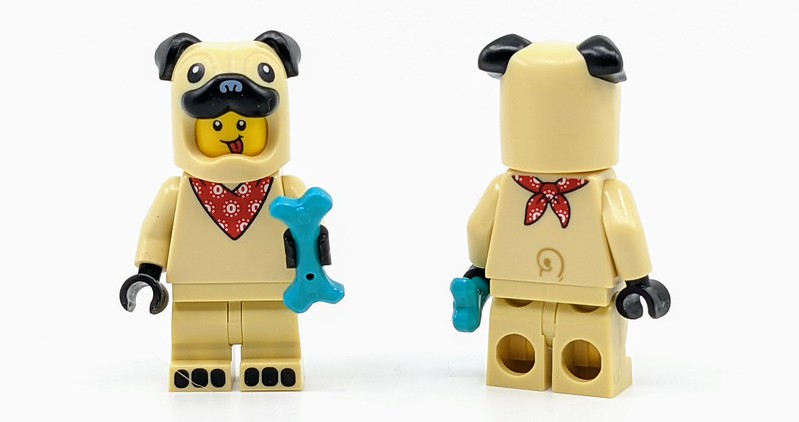 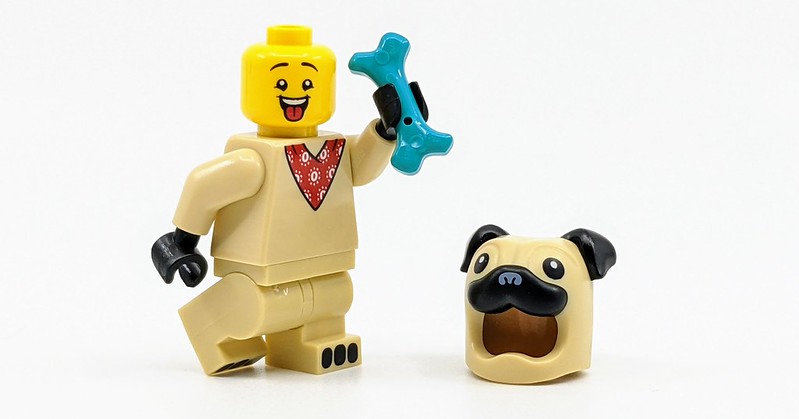 We’ve had plenty of bug-based characters, but no-one to look after them until now. The Beekeeper is a great character, and another to introduce a new element used for the beekeeper hat. This works great with the white coloured suit, even with its splashes of honey. To complete the look a 2×2 tile is printed to look like a honeycomb chamber and a recoloured Minifigure posing pin combined with a silver cup works nicely as a smoker pot. 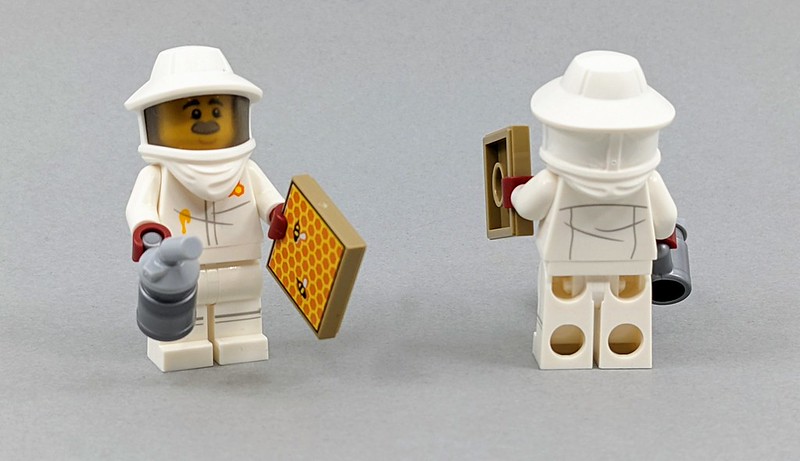 For use British types this Minifigure is based on the humble Ladybird. Similar to the Bumble Bee Girl from Series 10, the Ladybug Girl uses similar elements, with a new shell-wings piece for the back of Minifigure. The bug-like antenna is a re-coloured version of the Bumblebee Girls. For her accessory, the Ladybug Girl has a leaf topped with a great 1×1 round tile, printed to look like a ladybird. 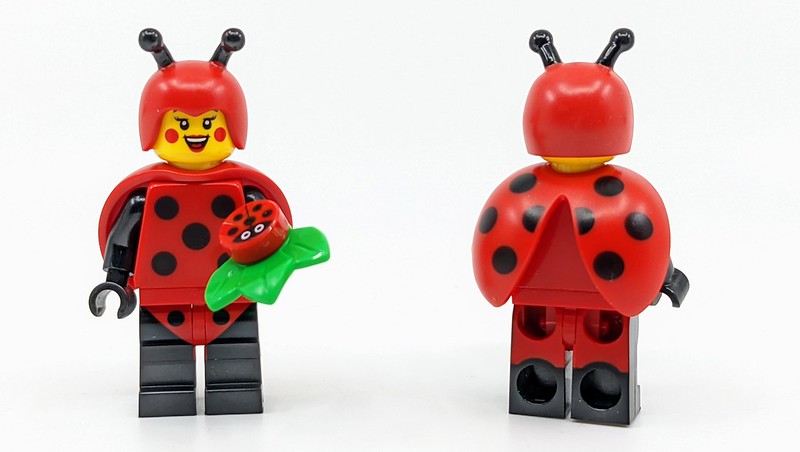 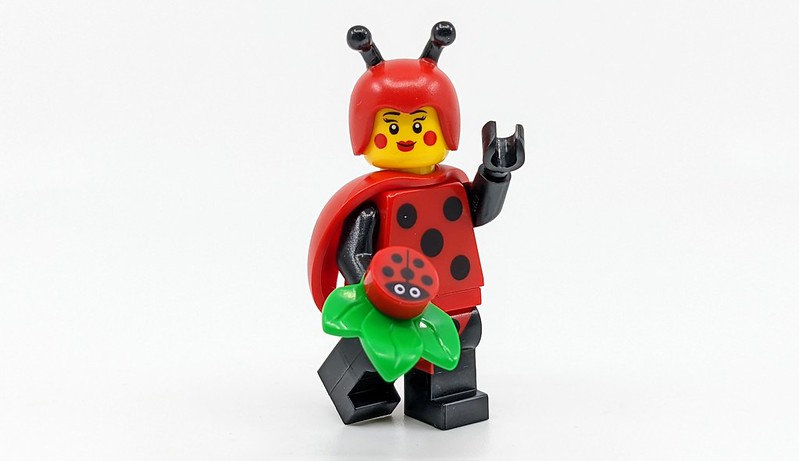 This young man may be on his way to becoming a musical maestro but it appears he’s also an AFOL in the making thanks to his Blacktron inspired t-shirt. Beyond his cool outfit, he also has a neat new element to represent a violin. This can be held via the neck of the instrument or via a small shaft under the violin. The violin bow makes use of the new wand element from the Harry Potter theme. I also like his two faces, the normal one look a little angry, but his other shows him lost in the music. 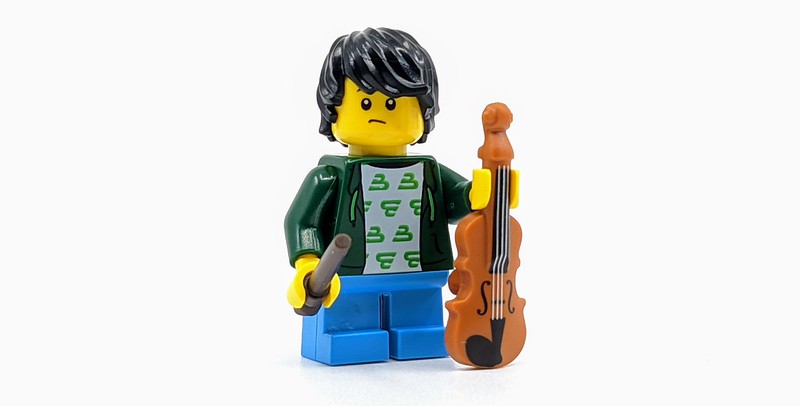 There have been a few different aliens featured in the various LEGO Minifigures series and they each use a unique element to represent the off-world creatures head, Which is the case here, the simply named Alien character has a unique new headpiece, with a build-in breather pipe. The print detail is great against the orange jumpsuit, I especially like the slight sweep of black on the shoulders. It appears this particular Alien is a little naughty, as he’s sporting a space crowbar and some sort of space jewel. 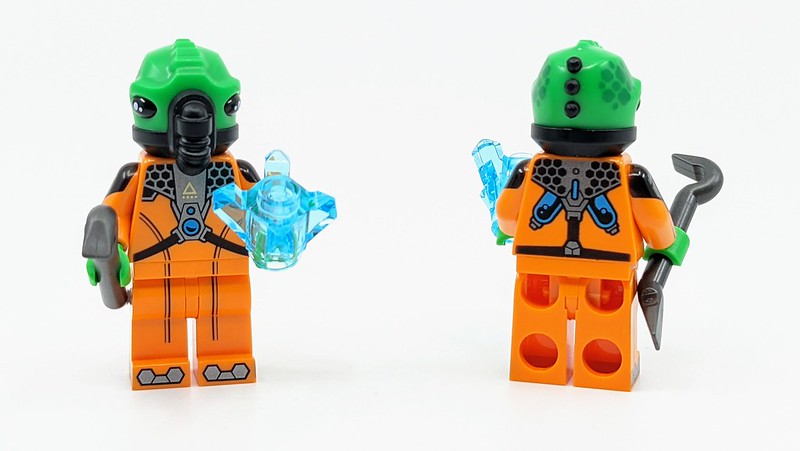 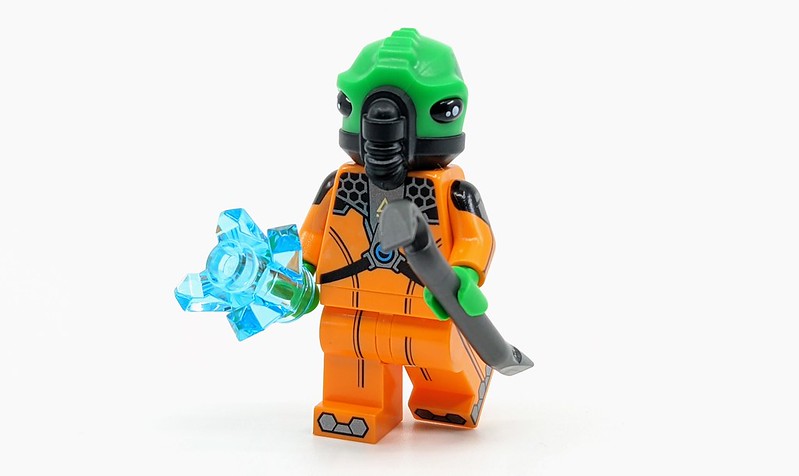 When images of the new series were released, people focused on this guy, because he’s a raid police officer. People seem to overlook the fact he’s a Space Police officer and also inspired by a similar-looking Minifigure from the LEGO Space sets of the last 80s, early 90s. Which is why this version has such a smiley expression. He also has a little more protection compared to his Classic Space counterpart, with a chunky armour piece, along with a blaster, cuffs, raid shield and light baton. The connection to Classic Space continues with the logo featured on both the torso and armour piece. 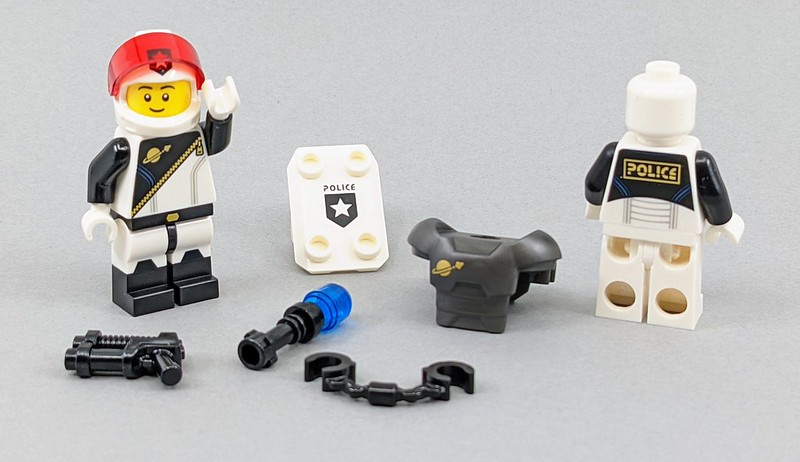 The Aztec Warrior from Series 7 finally has a chum to discuss ancient things with. Similar to that version, the Ancient Warrior has a new headdress element, this time based on a lion and no it’s not a re-coloured version of lion headdress from the Harry Potter Minifigures. The rest of the Minifigure is decorated with tribal paint and minimal tribal wear. I really like the print detail on the round shield, which goes nicely with the sword element. 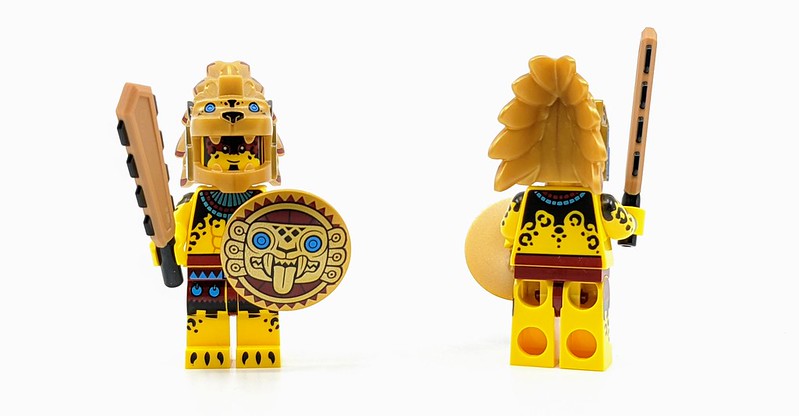 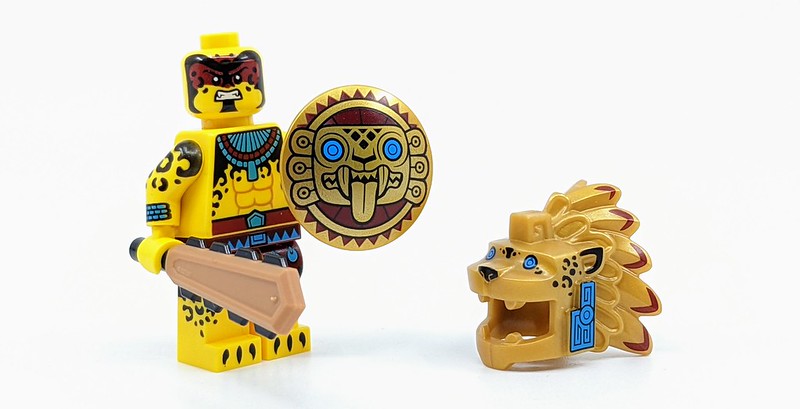 As well as offering costumed characters, wearable elements were recently introduced into the LEGO Minifigures range. We’ve had a race car, a horse and now a plane. Which is worn by a plane loving young lady. She can wear either a flight cap and goggle or pony-tailed hair. The plane element is a little plain, no pun intended but still looks great once connected to the Minifigure. I do like the fact the plane element looks a lot like the one featured in the DUPLO sets. 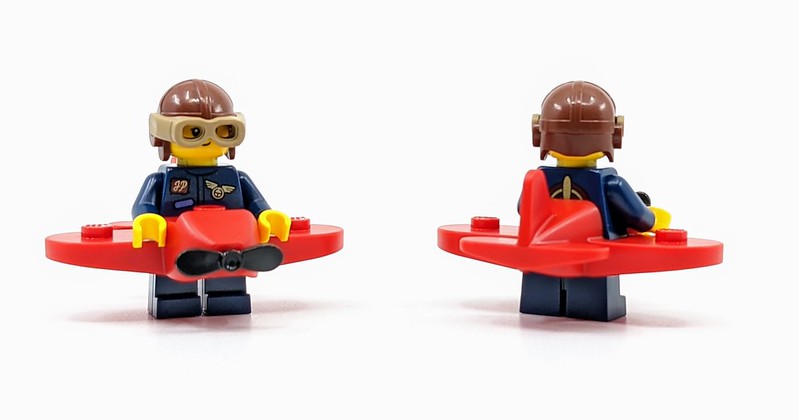 This is another character to use a new element. The Cabaret Singer has an elaborate feathered headpiece, which I assume we could see again in the upcoming VIDOYO music theme. I think the two faces uses on this character, in particular, the one in which she is belting out a song. This is the only Minifigure to feature a material element in this series. With a simmering piece used as a sort of skirt. You’ll defy need to fold it, for it to sit right, or else it looks like it’s being blown away. 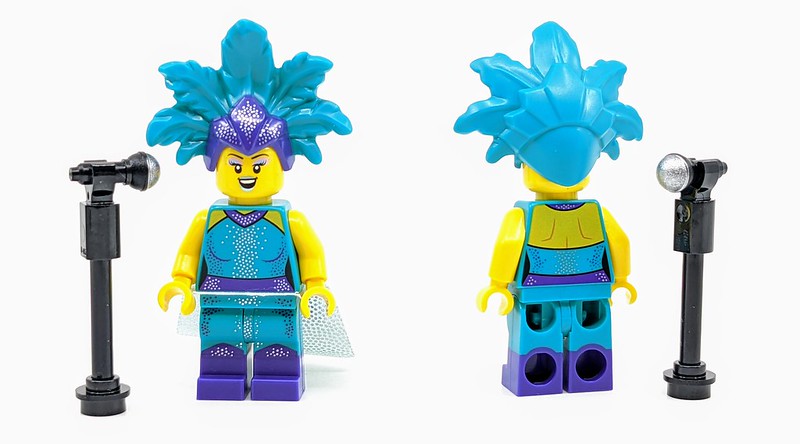 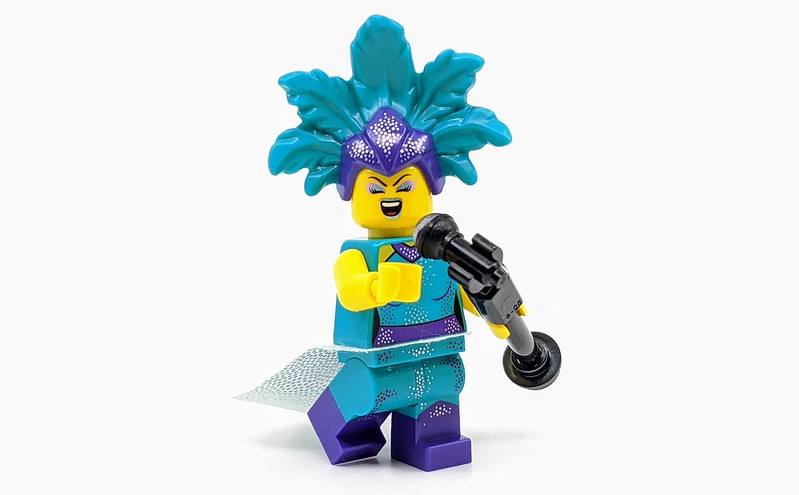 Considering this series already has a few large accessories, this is another Minifigure which some impressive extra elements. These include a surfboard, oar and a dolphin, plus a life jacket. In all honesty, the Dolphin doesn’t really need to be included, but who could say no to a ‘new’ LEGO creature. Although it’s a re-coloured creature, a similar piece has previously appeared in the Friends and Disney Princess theme, but still looks like a standard LEGO creature. Under her life jacket, you’ll find a nice dolphin-themed design and she has two vastly different faces, one with and without sunglasses.

As much as I enjoy the licensed series, the original characters are a little more fun, which is undoubtedly the case here. They also seem to be the source for some great new pieces and accessories. Many of which, filter into other LEGO sets. It’s difficult to choose any particular stand out character from this series Minifigures, but I do like the various accessories included with each character. They offer a mix of new pieces and current elements used in cool ways. Although we lose 4 characters this time around and if rumours are correct, this will be the case with future series, I think it’s a good decision. The cost of getting a full set isn’t cheap, more so in these times where bag feeling isn’t possible.