LEGO Hidden Side All You Need To Know

Home » New Products » LEGO Hidden Side All You Need To Know

LEGO® Hidden Side™ is an augmented reality-enhanced LEGO play theme where kids must turn a haunted world back to normal – one ghost at a time. It is the only play experience available today that fully and seamlessly integrates augmented reality (AR) with physical construction to reveal a hidden world of interactive play. Activating the bespoke AR app brings LEGO models to life, revealing a hidden world of interactive mysteries and challenges to solve. When combined, the two worlds make each other even more compelling and fun!

Jack and Parker are teenage bloggers who attend Newbury High School. Through an app on their mobile phones, they can see the unseen – and in this case, Newbury is overrun with ghosts!

LEGO Hidden Side offers 8 building sets full of awesome functionality and secret surprises that offer the build and roleplay fun of any LEGO play theme. Each model can be built as it appears by day and has transforming functionality to become the haunted version of itself. 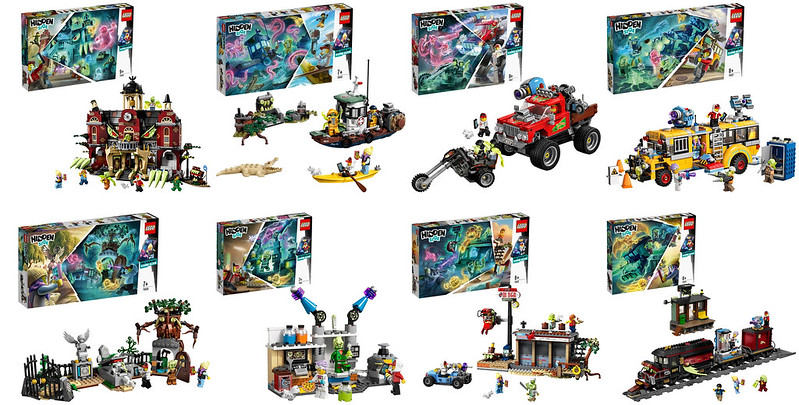 J.B.’s Ghost Lab playset features a cool mad scientist-inspired laboratory with a ‘Tesla-powered’ chamber to remove ghosts and a lot of tech details to inspire creative play. The set includes 3 minifigures: Jack Davids, tech genius J.B. and Douglas Elton, plus Davids’ ghost dog, Spencer, to role-play the action in the story and on the digital app.

This Wrecked Shrimp Boat playset features a cool, nautical-inspired shrimp boat that can split into two and be put together again, as well as a brick-built cliff that can become haunted. Experience this set with 4 minifigures: heroes Jack Davids and Parker L. Jackson, Captain Jonas and his son, Jonas Jr., plus Davids’ ghost dog, Spencer, and the legendary albino alligator to role-play the action in the story.

Build and play with this physical graveyard set featuring a tombstone statue that twists, grave that opens and a haunted toy tree! The playset includes 4 minifigures including heroes Jack Davis and Parker L. Jackson, a skeleton figure and Mr. Branson, plus Davids’ ghost dog, Spencer.

This unique toy features a stunt truck with rear suspension and a rear-mounted toy cannon, plus an awesome 3-wheel motorcycle chopper. This augmented reality toy includes 4 minifigures: hero Jack Davids and stuntman El Fuego, bikers Dwayne and Joey, plus Spencer, to role-play as ghost catchers in this monster truck toy.

This construction set features a cool go-kart and a highly detailed shrimp shack kitchen and a large shrimp sign that pulls away from the shack and changes into a haunted sign. The set includes 6 figures: Jack Davids, Parker L. Jackson, Chef Enzo, Sally, Ronny, and Davids’ ghost dog, Spencer.

All aboard a ghost-hunting AR experience with lots of play-starting features, like ghost wings that fold-out with the flip of a lever and a ‘de-haunting’ cannon to help defeat the ghosts and return the old train station to normal. This toy includes 5 figures: Jack Davids, Parker L. Jackson, tech genius J.B., ticket agent Ms. Santos, and ticket guy Chuck.

Kids assume a first-person perspective to join the lead characters, using their mobile phones to see and solve paranormal mysteries beneath the surface of their town. By holding their phones up to a physical LEGO model, “points of possession” are activated, releasing virtual ghosts that kids must then capture to stop the haunting. Kids must keep one hand in each world – physical and digital – to progress the play. A short digital game can be played independent of the building sets. The app will add new ghosts, game challenges, and randomization of gameplay to keep kids coming back to their models.

Specs: free download from the App Store and Google Play for iOS 6S and up and Android phones on the Arcoren supported list. App works on tablets; however, the play experience is designed with phones in mind to facilitate kids’ ability to play with one hand in each world, which is easier to do with a phone.