For the last few years DK Books have been publishing their Build Your Own Adventure books. These books are similar to the old LEGO® Brickmaster titles and combines a basic story, inspirational builds and an exclusive LEGO minibuild and minifigure, more recent titles have also added bookmarks and a poster. Each year there have been a couple different titles, based a various LEGO play themes. So far these have included LEGO Star Wars, NEXO KNIGHTS, Friends, City, DC Super Heroes, NINJAGO and Disney Princess themes. These years offerings are based on LEGO Star Wars and for the first time LEGO Harry Potter. Which is the title I’ll be looking at today. Normally both titles are published at the same time, but the LEGO Harry Potter: Build Your Own Adventure book has arrived a little earlier. 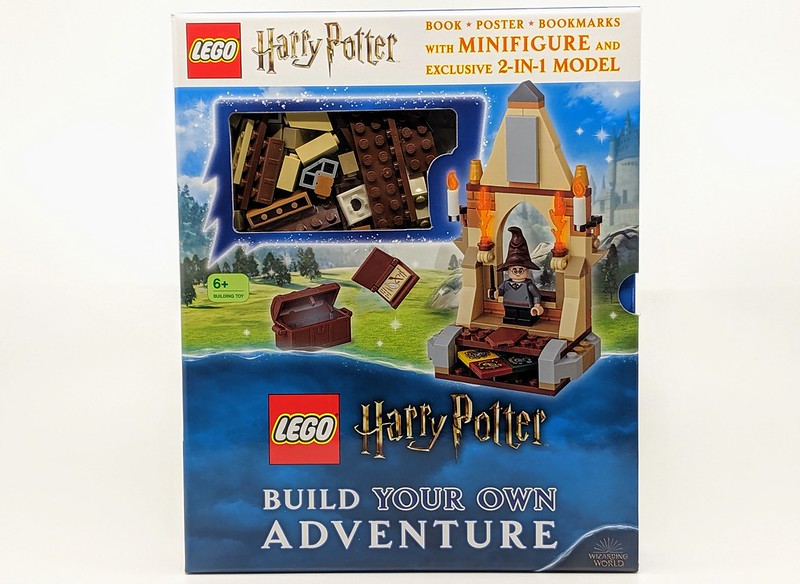 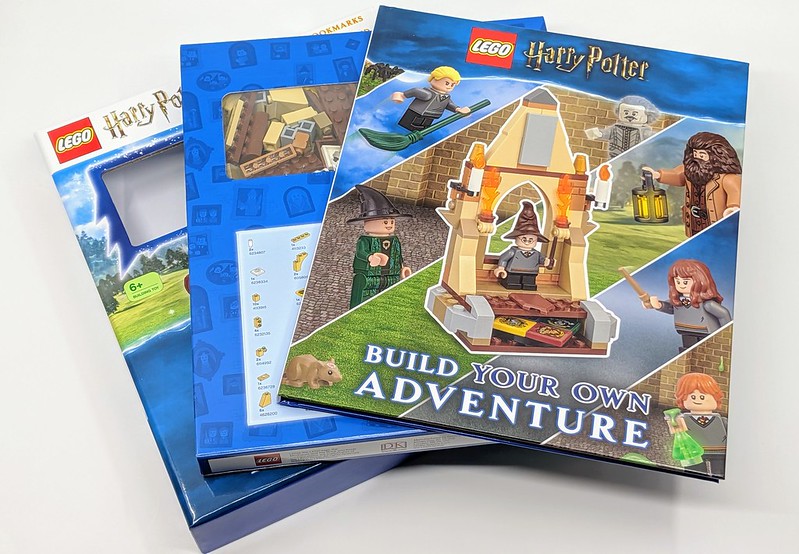 The package includes a slipcase which features a book and a slim cardboard box, in which you will find a polybag of LEGO elements, poster and bookmarks. The bookmarks feature Harry and Professor Dumbledore, each can simply be popped out from the flapped section. The poster features a fun scene especially created for the book, both are fun little bonuses. 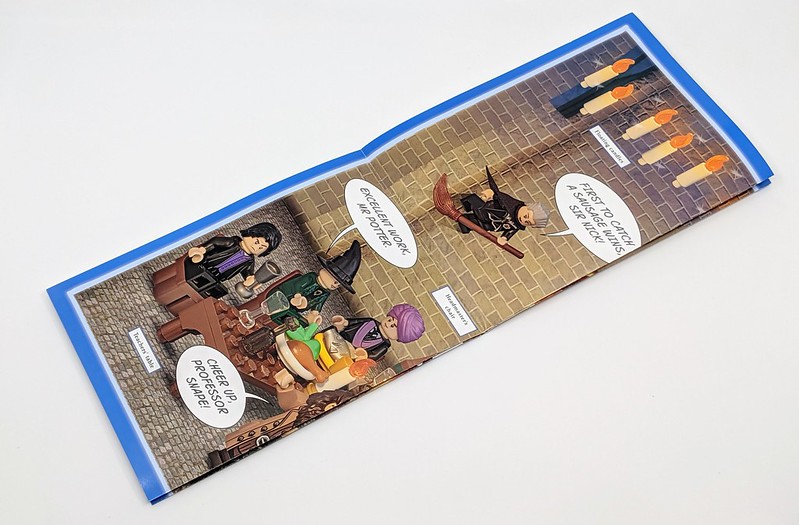 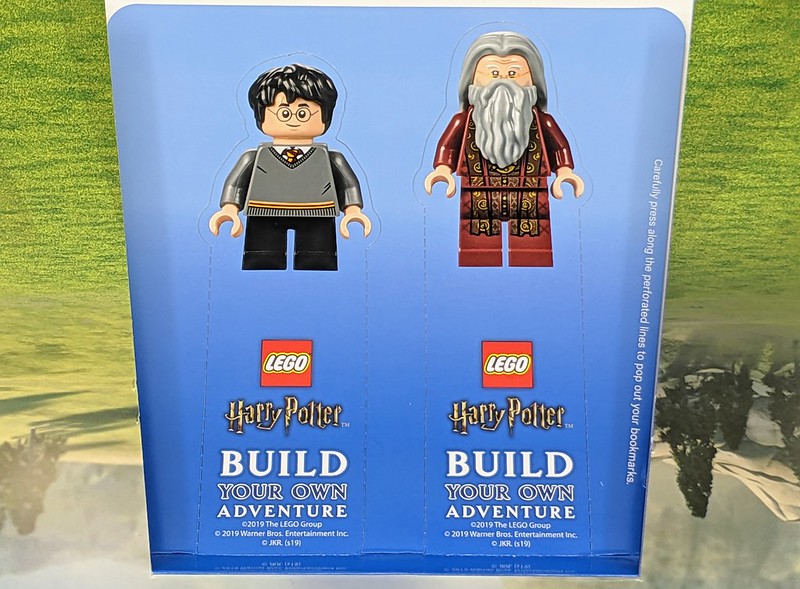 The actual book is rather small, when compared to other DK LEGO titles. It follows a basic story which helps to tie in inspirational builds featured across the book. This mainly follows Harry’s early years and his time in Privet Drive, along with arriving a Hogwarts and various adventures he has there. 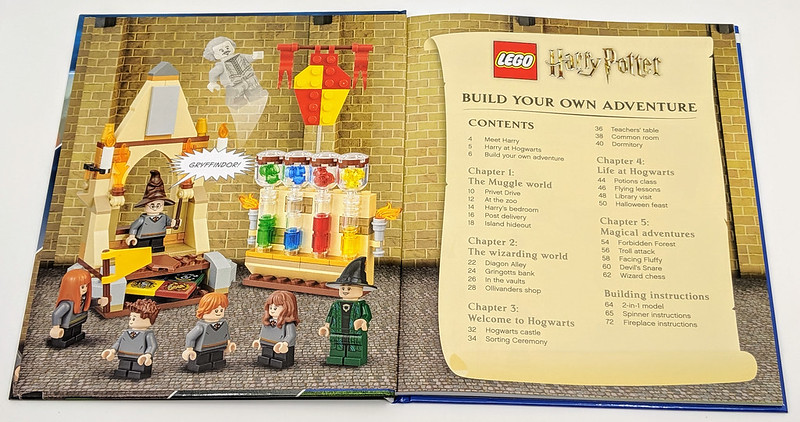 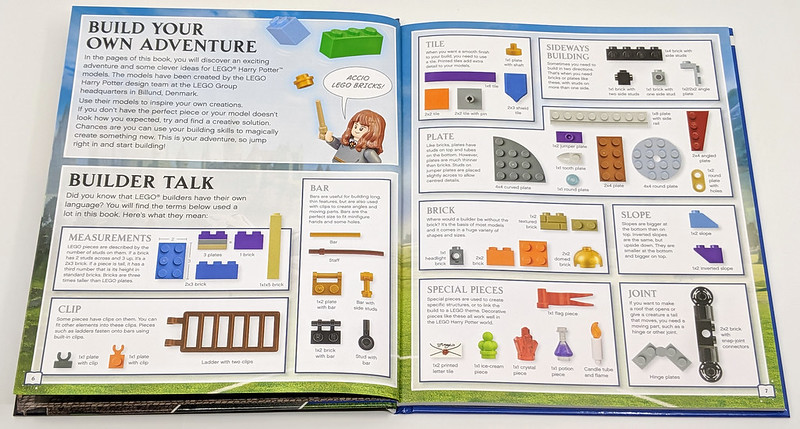 Normally there inspirational builds featured in the book are provided by a AFOL fan builder, but interestingly actual LEGO designers have provided some of the builds this time around. That includes well known LEGO Design Team members such as Marcos Bessa and Mark Stafford. 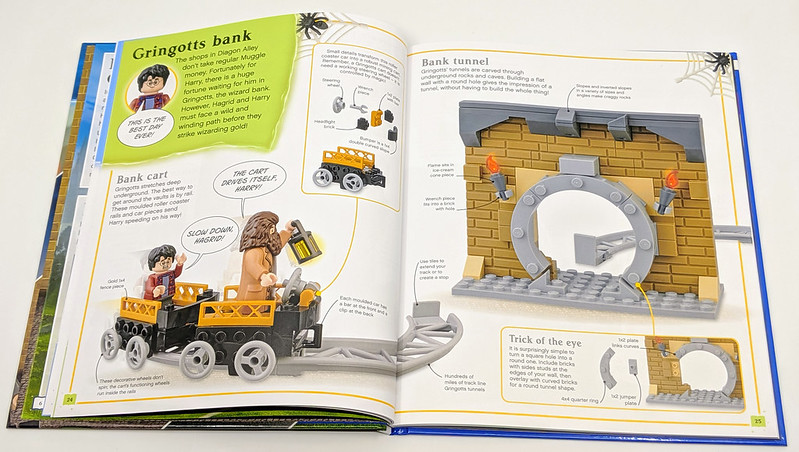 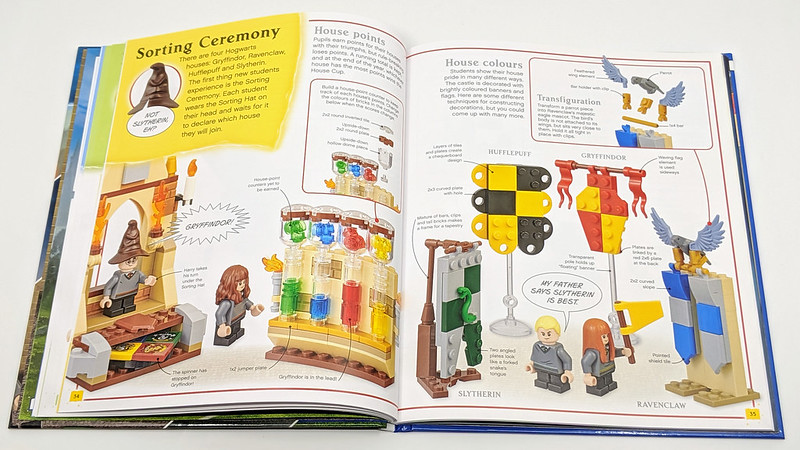 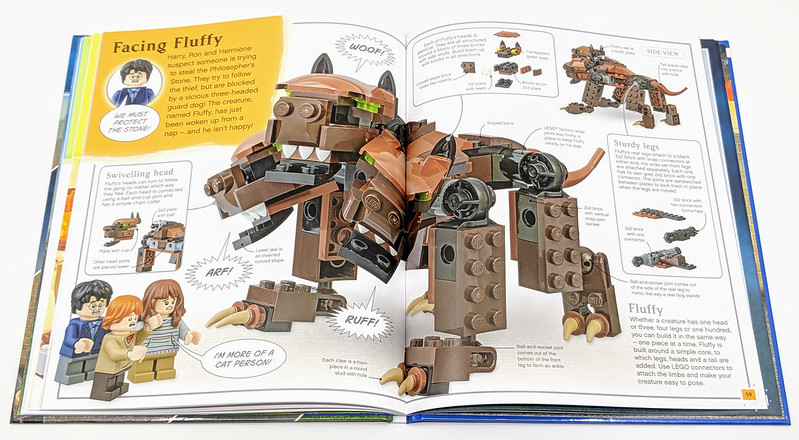 Now the book doesn’t include step-by-step instructions for these builds, nor does it breakdown the elements need, the builds are merely there to inspire you. Some small steps are highlighted and how particular elements are connected, but don’t expect to be fed the same sort of instructions found in LEGO sets. Apart from those needed to build the included 2-in-1 model. There also isn’t any particular sets you will need to create these inspirational builds, there are meant to inspire you to raid your own bricks and get building. 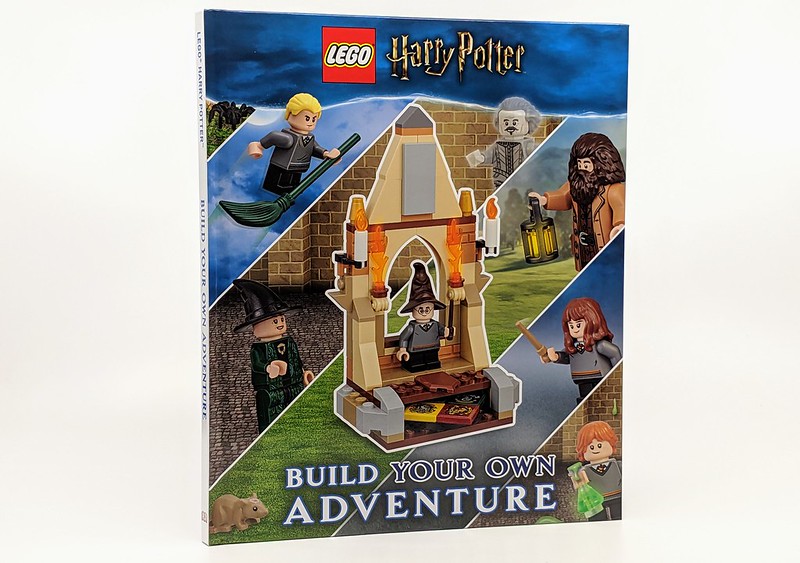 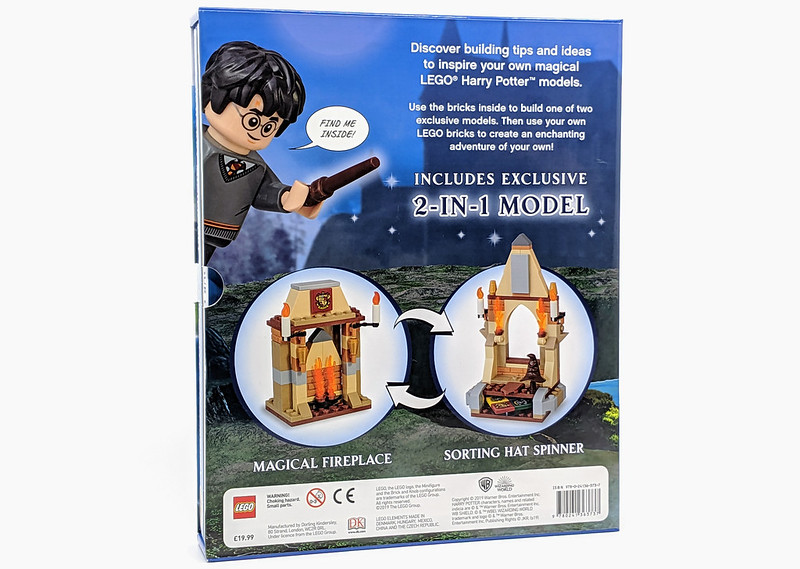 The book includes an exclusive 2-in-1 minibuild, along with a Harry Potter minifigure. The minibuild can be built either has a Magical Fireplace or a Sorting Hat Spinner. Both builds use the same set are elements included, so you can only build one at a time. 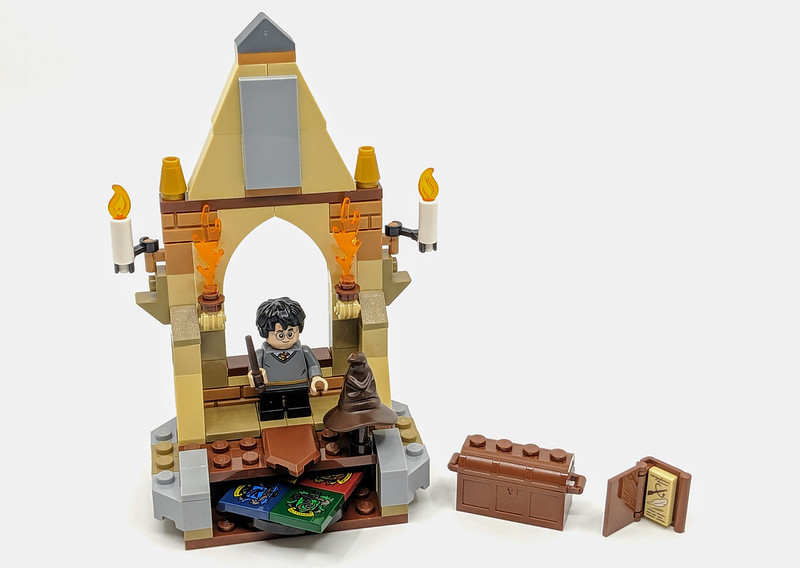 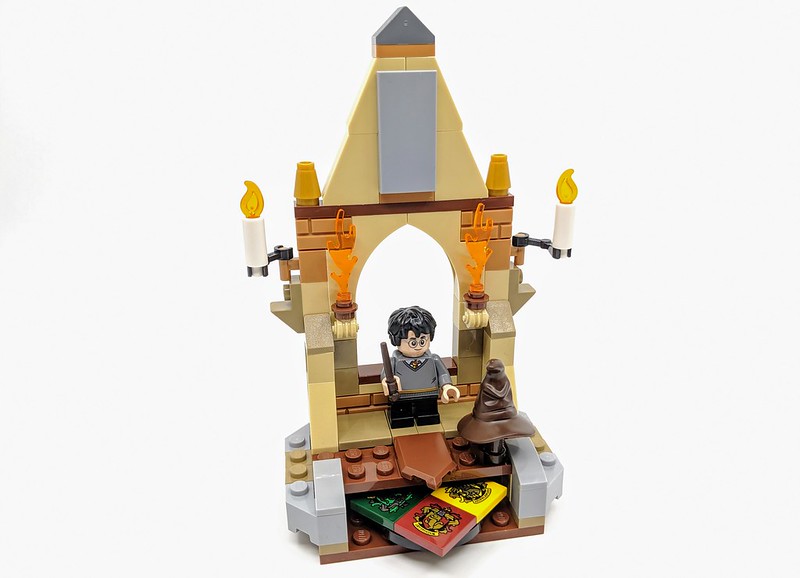 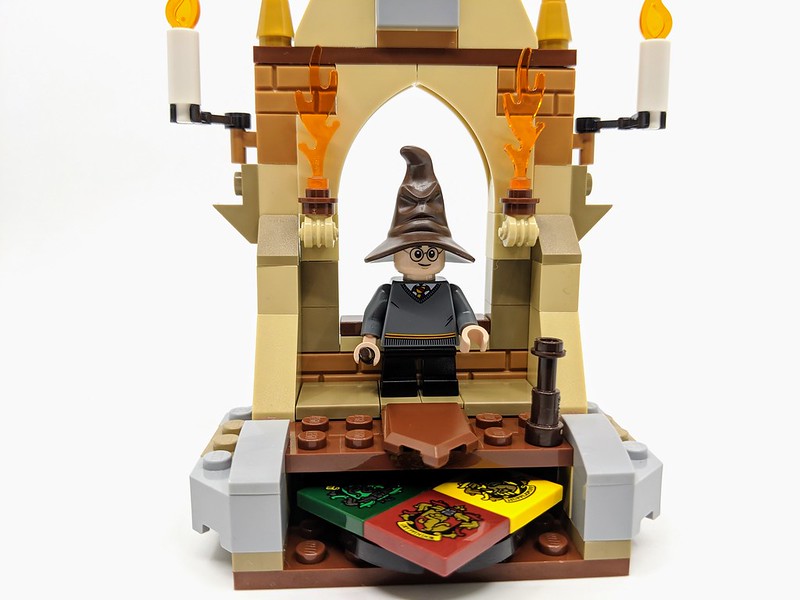 They are both fun builds, but I think I like the Sorting Hat Spinner a little more compared to the Fireplace. But that being said, both builds make great use of the spinning motion. In the Sorting Hat build, as a way to select which house you belong to and in the Fireplace build, to turn the central section of the fireplace. 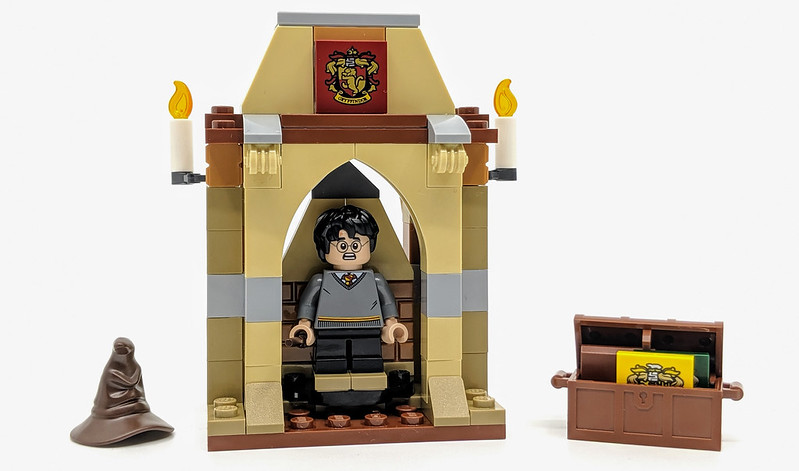 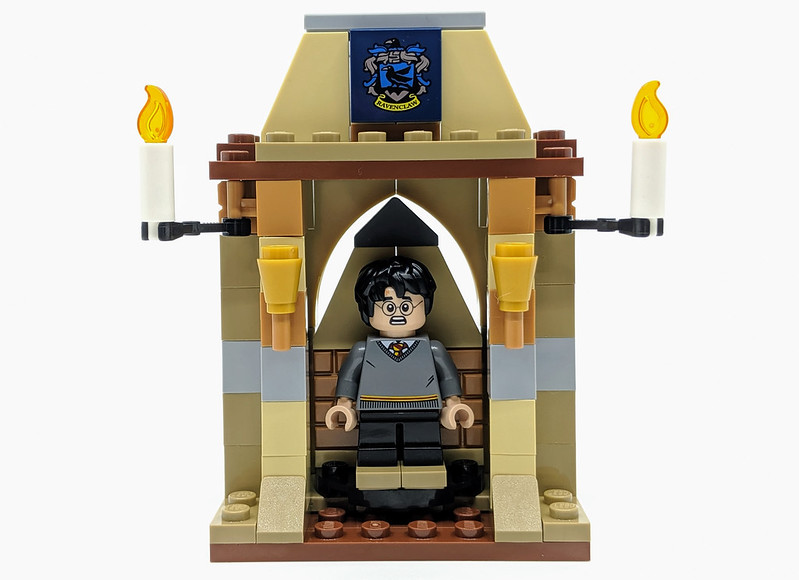 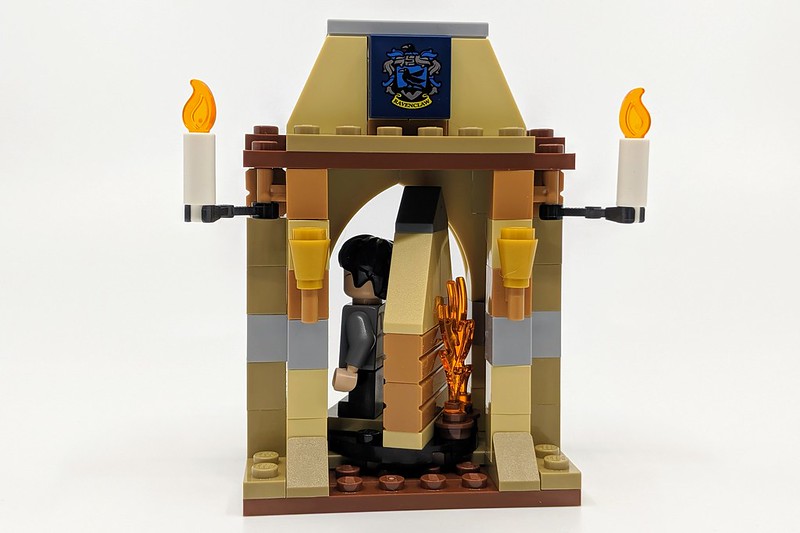 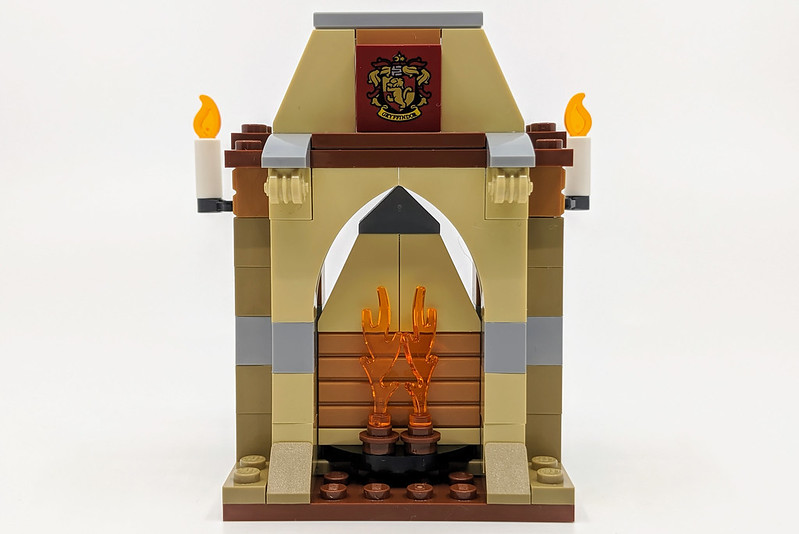 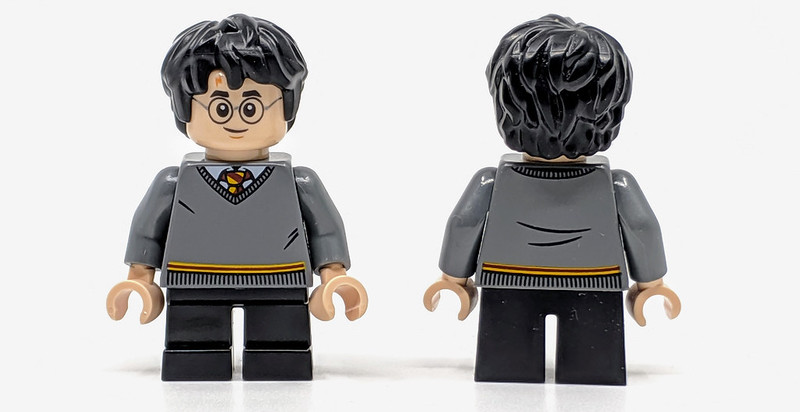 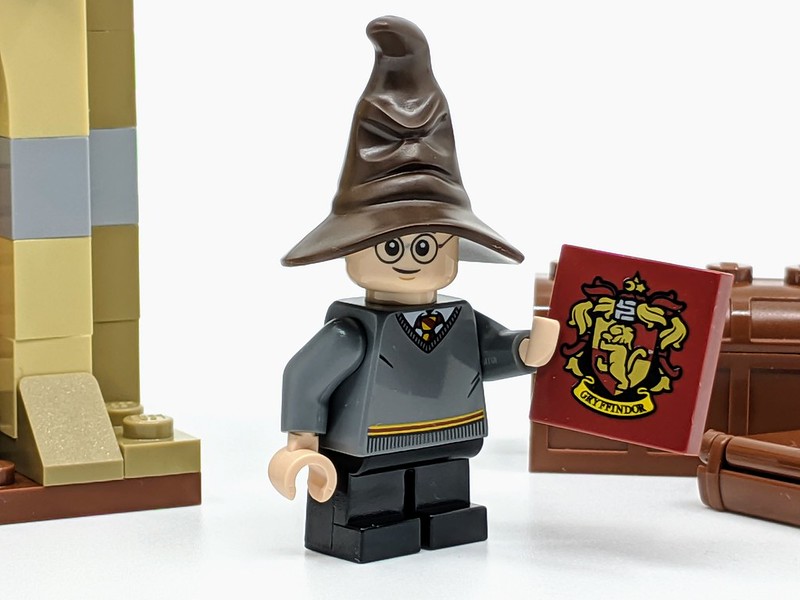 One thing I was particularly impressed with is the printed elements, these feature the Hogwarts House crests. These tiles have appeared in other sets but they have all been achieved with stickers, they weren’t even printed in the huge Hogwarts Castle set! Not a sticker in sight here, fully printed and most definitely better for it. 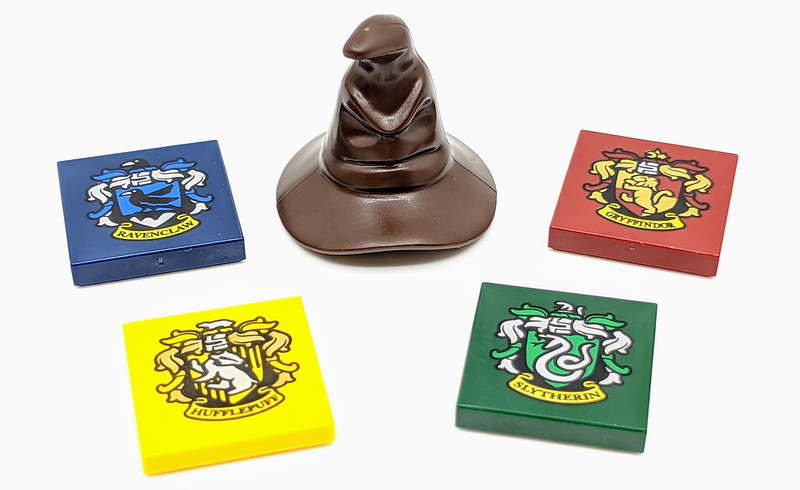 There are various LEGO books on the market, but it’s safe to say those which feature physical LEGO elements definitely gain the most interest from LEGO fans. Harry Potter has been a phenomenal success since it returned to the world of LEGO last year, which means this book has an additional audience compared to other variants. The bonus of bookmarks and a poster really add to the complete package. But the 2-in-1 minibuilds are by far the best part of the book, they are great little models, with a surprising amount of playability. LEGO Harry Potter: Build Your Own Adventure is available now from Amazon and all good book retailers. 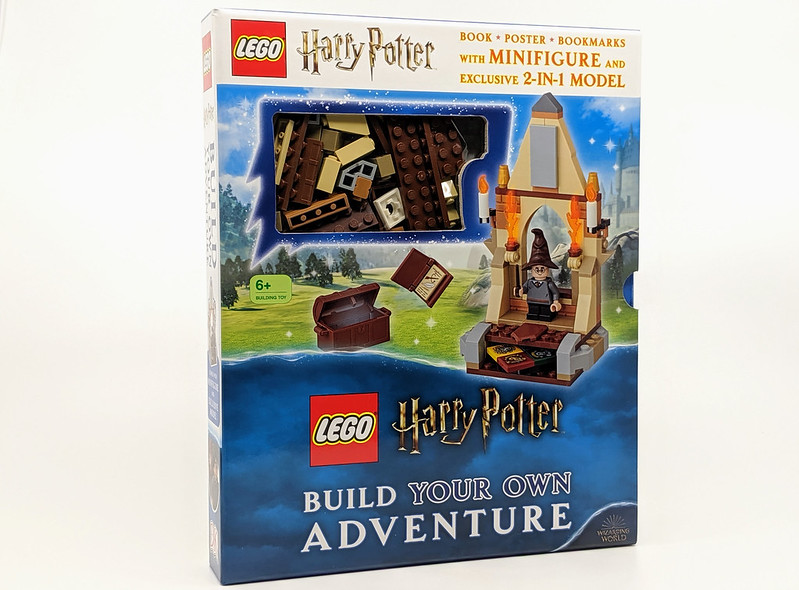