Over the last year or so, LEGO® Stores started to introduced unique characters and elements to their Build-a-Minifigure stations. With many stores also changing their in-store experiences due to COVID-19, many of these exclusive pieces are being pre-packed into a Minifigure triple pack. After a trio of spooky characters appeared for Halloween, it’s time to get festive with the Holiday triple pack. These each include new or rare Minifigure parts, not currently available anywhere else. So here’s a closer look at them. 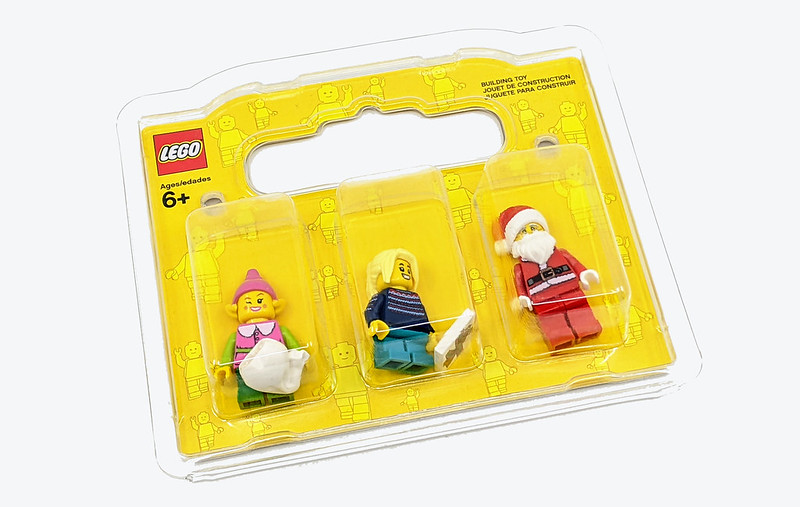 The LEGO versions of old Father Christmas has certainly evolved over the years. With the biggest change coming in 2012 and the introduction of a proper Santa hat element. Since then LEGO Santa has been tweaked here and there. The version of the Santa featured in the LEGO Stores Minifigure Pack is a mixture of previously used pieces and a new torso. The hat remains unchanged, with Santa’s head matching those found in the 2017 and 2019 LEGO City Advent Calendars. These give him a pair of specs and give Santa a more stately appearance. His torso is a stepdown, to be honest, it matches that found on the recently released Happy Santa keychain. Unfortunately, it suffers from the old white print on a darker base element, so the white trim looks a little pink.

Next is a young girl Minifigure, this has a simple blonde ponytail hairpiece and short blue legs. But she has a great festive jumper and a cute set of expressions ranging from a toothy grin to all-out awe. Well, you’d be just as excited if you were meeting Santa. Or the delight may come more from the awesome new elf Minifigure. The LEGO elf first appeared in the 11th series of Collectable Minifigures and has appeared in a number of festive sets since, including this year’s Winter Village set. Now it appears in an all-new colour – pink. It’s combined with a double-sided head featuring two new face prints and a brand new torso. This has a pink body to match the hat and light green arms, she’s finished off with a pair of short darker green legs. Unlike some of the other BAM packs, there are only a couple of accessories included with the characters, one is a 2×2 flat tile with a green and red printed bow. The other is a cool little white version of the sack, appearing for the first time in this colour.

Although many stores are currently closed due to regional lockdown rules, you’ll still be able to find them in LEGO Stores next month and there are certainly worth picking up, especially the cool little elf girl.