The talented Model Makers at LEGOLAND® Windsor Resort have been hard at work building a super size LEGO® cake to celebrate the reopening of the park today, as well as the LEGOLAND Hotel’s 10th birthday. Standing at four-foot-tall, the cake is built using 18,272 LEGO bricks, weighs over 50kg and includes ten LEGO candles. The supersized LEGO cake is now on display outside the 148 room LEGOLAND Hotel and will remain there throughout its milestone birthday year. 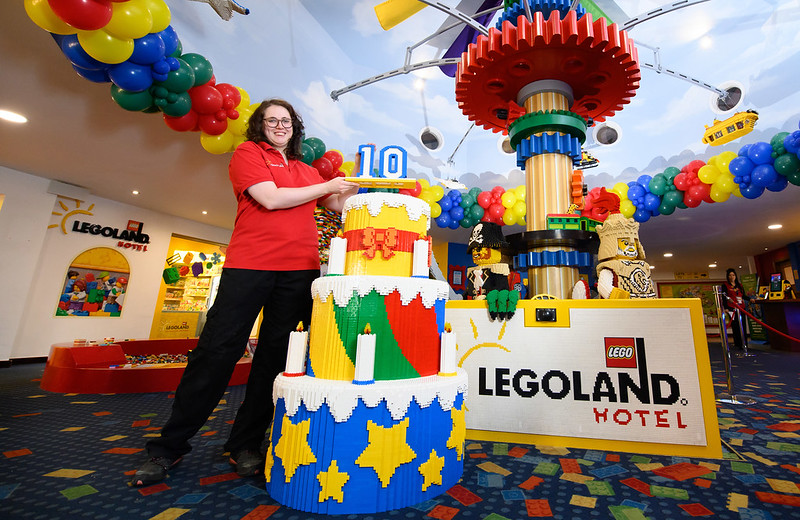 Friday 18 March: There were no soggy bottoms in sight when a birthday cake with a difference was unveiled at the LEGOLAND® Windsor Resort today to kick off its 2022 season.

Standing at an impressive four-foot-tall and built using an incredible 18,272 LEGO® bricks, the LEGO® birthday cake has been unveiled at the famous LEGOLAND Resort Hotel today to celebrate its 10th birthday as the theme park officially opens its gates for the 2022 season on the 18th of March.

Talented Model Makers were seen applying the final touches, placing the final bricks and completing the build with the number ten placed on top of the model, in the UK’s only LEGO themed Hotel.

With ten LEGO candles included, the supersize cake is now on display outside the 148 room LEGOLAND Hotel throughout its milestone birthday year and is the latest incredible LEGO model on display at the Resort and Hotel.

Helen Bull, Divisional Director at the LEGOLAND Windsor Resort, said: “We’re well and truly in party mode this year, as we open the Resort for our 2022 season. We have so much for families to enjoy, from our new brick building experience – The Brick – opening in April, to the first anniversary of the UK’s first flying theatre ride Flight of the Sky Lion in LEGO MYTHICA. 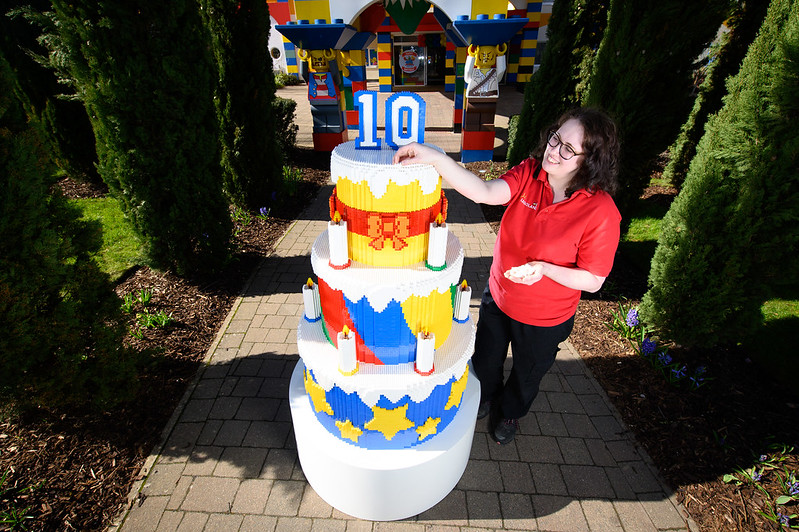 “The LEGOLAND Resort Hotel is celebrating 10 years since it first opened its doors in March 2012 and we’re marking this milestone with a host of celebrations including the unveiling of our giant LEGO birthday cake! We can’t wait to welcome families back into the Resort this year and hope that guests will join us at the hotel for a slice of real cake very soon.”

Guests to the LEGOLAND Resort Hotel during this celebratory year will see LEGO Ollie the Dragon receive a birthday makeover as he guards the hotel entrance sporting a colourful party hat. The party atmosphere continues inside the hotel where guests will be greeted with sweet scent of birthday cake as step foot inside the reception. With an array of party decorations, new party evening entertainment, pop badges up for grabs, birthday themed food and drink items added to the menu and fun new birthday themed LEGO building challenges.

But that’s not all! To add to the bricktastic excitement, families staying at the Resort Hotel and Castle Hotel in 2022 will now get priority access to the rides from 10am-11am*. Overnight stays at the LEGOLAND Hotel are from £90per person for a bed and breakfast stay with one day entrance into the theme park.

Guests visiting the LEGOLAND Windsor Resort this year can look forward to a host of great attractions including brand new brick building experience ‘The Brick’ coming to Miniland this April. Kids and their parents can fully immerse themselves in this new experience filled with thousands of LEGO bricks while building, LEGO masterpieces together. 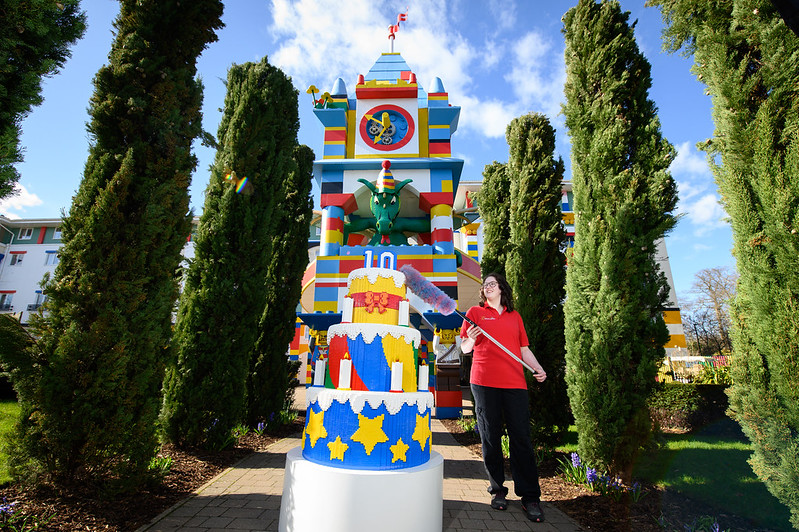 Intrepid explorers can also voyage through the portal to visit the parallel universe of LEGO MYTHICA®, full of epic adventures, powerful guardians and mythical creatures waiting to be discovered. Families can soar through the skies on the UK’s first flying theatre ride, Flight of

The Flight of The Sky Lion found in the heart of the multi-million-pound land.

For more details on the LEGOLAND Windsor Resorts opening times and the Resort Hotel’s 10th anniversary year, or to book a stay visit www.legolandholidays.co.uk