You can build some pretty cool things with LEGO® elements – giant bridges, dinosaurs, braille machines and of course a mass of amazing MOCs from builders across the world. But the LEGO Technic Design Team and LEGO Engineers have surpassed themselves. Over the past couple of weeks the LEGO social media channels have been teasing a Technic project dubbed ‘Build For Real’ which seemed to suggest that somehow a full-sized LEGO Technic Bugatti Chiron has been built. Despite knowing full well this is the obvious outcome of the teases, when I first open the assets from LEGO, I was dumbstruck. Yes they really have built a full-sized recreation of the Bugatti Chiron, made from Technic elements and it’s also drivable! Over a million elements including newly created pieces, have been expertly pieced together, without a single drop of glue. The build is powered by over 2300 Power Function motors and a complex system of Technic gears and axels. Just about every single part of the LEGO Technic Bugatti Chiron has been made from Technic pieces. Seeing is believing so check out the set in action below and you can build your own, smaller version now with the new LEGO Technic Bugatti Chiron set.

Testament that with LEGO Technic you can build for real, this non-glued, fully-functional and self-propelled LEGO Technic model can fit two passengers inside and accelerate to over 20km/h

Perfectly recreating the organic design lines of the world’s fastest production car – the iconic Bugatti Chiron – the LEGO Technic life-size model pushes the boundaries of what LEGO builders imagined was possible to build in LEGO elements.

The model is the first large scale movable construction developed using over 1,000,000 LEGO Technic elements and powered exclusively using motors from the LEGO Power Function platform. Packed with 2,304 motors and 4,032 LEGO Technic gear wheels, the engine of this 1.5 tonnes car is generating 5.3 horse power and an estimated torque of 92 Nm.

“This life-size model is a first of its kind in so many ways and with it, we wanted to push the boundaries of our own imagination. For over 40 years, LEGO Technic has allowed fans of all ages to test their creativity with a building system that challenges them to go beyond just creating new designs, to also engineering new functions. Our Technic designers and the engineers from the Kladno factory in the Czech Republic, the place which also builds the impressive models for LEGO Stores and LEGOLAND parks, have done an amazing job both at recreating the Chiron’s iconic shapes and making it possible to drive this model. It’s a fascinating example of the LEGO Technic building system in action and its potential for creative reinvention.” 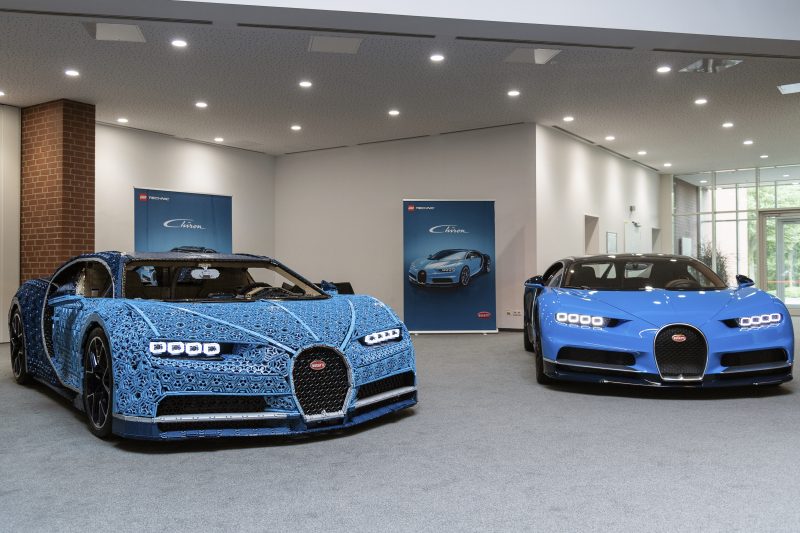 A fascinating feat of design and engineering

Seen from a distance side by side, the resemblance of the two cars is striking. Get closer and you will find a fascinating and complex outer ‘skin’ structure, built of interconnected triangular segments made into a LEGO Technic ‘fabric’ designed to mimic the iconic shapes of the original Chiron. Peek inside and discover that every single detail of the original car has been carefully and precisely recreated in LEGO Technic elements – from seats, to dashboard and the steering wheel. 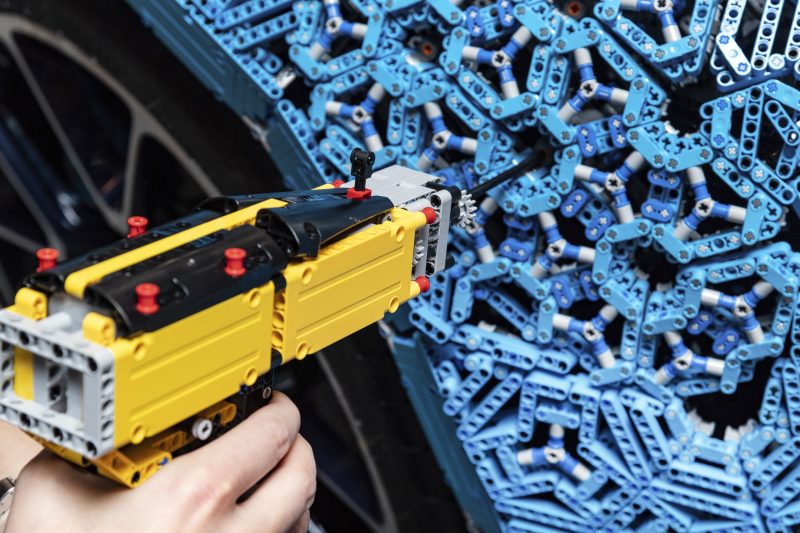 Building a one of a kind LEGO Technic life-size car is one part of the task. Testing if it can drive is another. And what better location than the same place where the real Chiron was first tested – Ehra Lessien proving ground in Germany – a unique facility built to handle speed.

One weekend afternoon, the LEGO model took off and accelerated to everyone’s joy and amazement. And while it may not match the original Bugatti Chiron’s mindboggling 420 km/h speed, the LEGO Technic’s power function motors have managed the impressive performance to propel it to a little over 20km/h – ultimately making the ‘Build for Real’ idea truly complete.

Andy Wallace – the driver behind the LEGO Technic Chiron – former racing driver with multiple wins of the 24 Hours of Le Mans and Daytona, as well as many other races, and today official Bugatti pilot, said:

“When I first saw the LEGO Chiron, I was immediately impressed by the accuracy of the model and the minute attention to detail. In fact, from about 20 metres away it’s not obvious that you are looking at a LEGO car. I can only imagine how much time and effort went into making this model.”

“Driving the LEGO Chiron was a great experience, which I thoroughly enjoyed. All those years ago I could never have imagined that one day I would actually drive a LEGO car!”

The Chiron is the ultimate super sports car and the latest interpretation of Bugatti’s brand values‚ Art Forme Technique‘. With a power output of 1,500 HP, unprecedented for production vehicles, an exceptionally high torque value of 1,600 Nm between 2,000 and 6,000 rpm and a wide variety of technical innovations, the Chiron sets new standards in every respect. The Chiron is not only designed for maximum speed, but also meets the highest possible demands in terms of luxury, comfort, everyday drivability and durability. The Chiron combines the best in all these areas which makes it the world’s most complete super sports car. 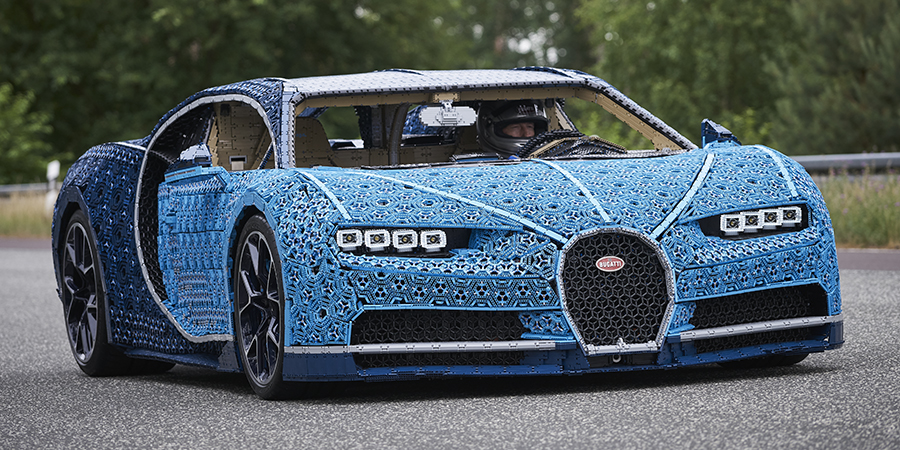 The model is a first of its kind in many ways:

Bugatti Automobiles S.A.S. is the manufacturer of the ultimate production super sports car. Since it was established in 1909, the French luxury brand has had its headquarters at Molsheim, Alsace, where 450 Veyrons were produced from 2005 to 2015 and where the new Chiron, which is limited to 500 cars, is being hand-crafted today.

The brand, which has been part of the Volkswagen Group since 1998, has 34 dealers and service partners in 17 countries in Europe, North America, the Arabian Peninsula and Asia/Pacific. www.bugatti.com