How The LEGO Leaks Were Leaked

Home » News » How The LEGO Leaks Were Leaked

It’s been a long-held tradition here at BricksFanz to take part in the annual mischief of April Fools Day. Over the last few years, my japes have included a brick-themed version of Fox hit ‘Masked’ series, dubbed the Masked Builder. Previous to that there were the LEGO Collectible Brick Separators, which still does the rounds, even now. Along with having hard copies of new set images delivered by fax to combat leaks. This year hasn’t had the best of starts for me due to real-world issues so I wasn’t really in the mood to do an April Fools, but did have a couple of ideas knocking around. But then only a couple of days ago I had the idea for the BricksFanz 2021 April Fools article.

Leaks are a major talking point for the LEGO community, fans love to see them and most media outlets can’t share them. So as I was cutting up some vegetables for a hearty roast, I had the idea for LEGO Leeks. The new 18+ branding was the perfect vehicle for them so I got to work. Inspired by the long plate elements used for the flower leaves in Flower Bouquet set, I attempted to use one of the digital building platforms to create a brick-built leek. I’m no expert with using these but knocked something up. But it looked very digital, despite the in-built render tools. So I asked for some advice from John aka Bricked1980, the amazing builder behind a number of 10K LEGO Ideas projects and a fellow local LEGO fan. 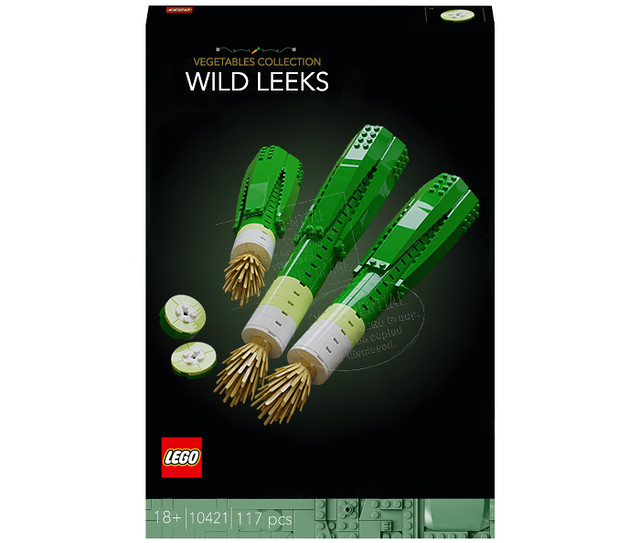 John took my original digital leek build and turned it up to 11. Not only did he make it look real, but he also added more a little more to the image, which is what you saw on the ‘leaked’ box. I then used my very basic photoshopping skills to mock up the packaging. Even adding a tiny LEGO carrot to the ‘Vegetable Collection’ logo. Whack on a confidential watermark and the LEGO Vegetable Collection Wild Leeks set was complete. I even went as far as to take a terrible ‘flash on’ photo to share on the #legoleaks hashtag on Instagram.

I think it went down well with fans, comments online would suggest many of you would actually buy the set. So a massive thanks to John for the help, to other sites who have shared it and to all the wonder LEGO-loving BricksFanz readers for the fun comments. Now I best start planning for April 1st 2022. If you want the LEGO Wild Leeks to become a reality, support them now on LEGO IDEAS.

For a round-up of other awesome LEGO April Fools fun head over to Brickset, who introduced us to the +18 LEGO DUPLO Design range and The Brother Bricks who shared news of LEGO Solutions Brick Stick glue. Also The Brick Fan who celebrated 20 years of Jack Stone.