The Wizarding World of LEGO® Harry Potter introduced the Hogwarts Moment sets in early 2021. These buildable books can be opened to reveal a unique recreation of various Hogwarts classrooms and this year, two more classes have joined the line-up. Along with the classroom sections, there are various buildable elements and a trio of Minifigures which include a teacher and two students. The latest classes to become Hogwarts Moment sets include Professor Trelawney’s Divination Class and Mad-Eye Moody’s Defense Against The Dark Arts. Here’s a closer look at both of the new sets. 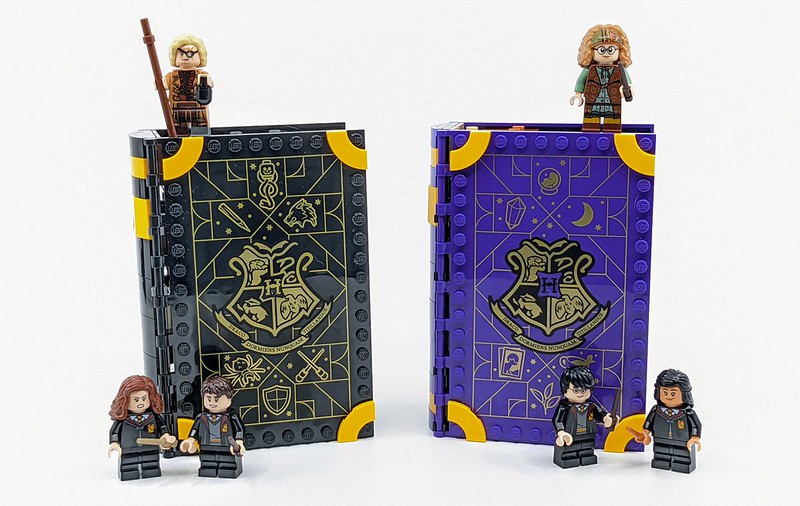 The basic build of the Hogwart Moments sets is very similar with cover plate elements used as the core of each classroom. The same element is used for both the front and back covers of each book, with the Hogwarts crest printed on each of the different coloured covers, the latest two classes include Divination with a purple cover and Defense with a black cover. These are then connected via a central spine, created from a 2×15 plate and four additional 4×4 plates and a series of bow elements, matching the colours of the covers. 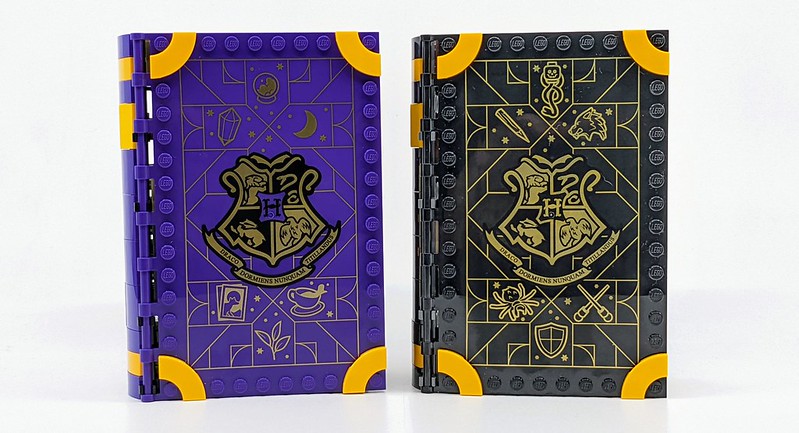 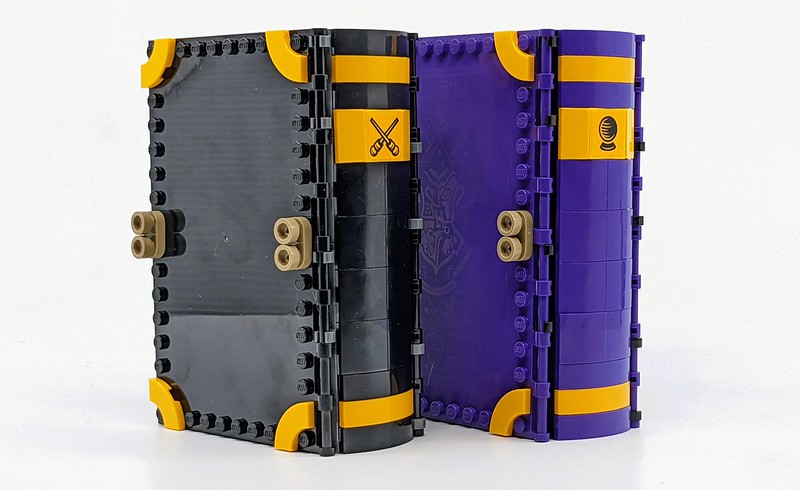 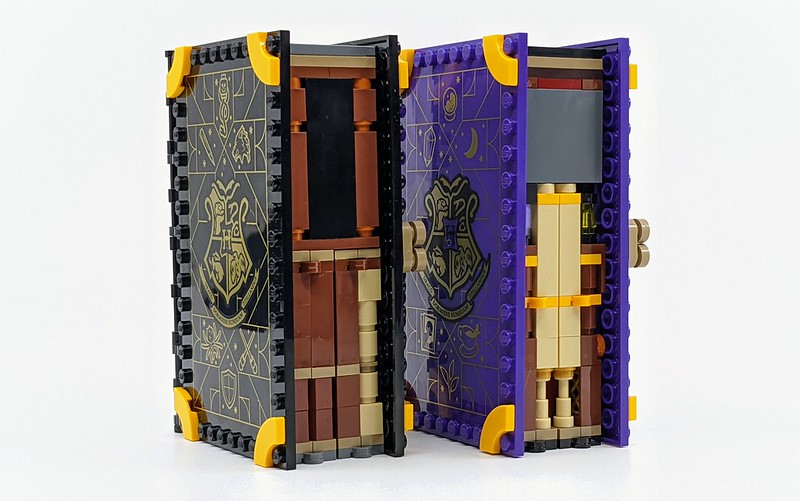 Once the cover is complete the insides are then added. These comprise of a selection of minibuild furnishings and then sections which are directly connected to the cover but can be opened out. This is where things get quite clever, as all these elements are built in such a way they can neatly slot together within the book once it’s closed. This is a great way to keep everything together, although the Divination Class book doesn’t close as well as the other set. Still, this is a clever little way to expand the play surface of the sets and is even more impressive to get these pieces to slot together when inside the book. Although we are treated to a printed cover on each book, much of the other graphic details are achieved with stickers. These are mainly used on the inside of the covers.

The Divination Classroom is rather homely in the Potter films and this comes across in the Hogwarts Moment version of the class, with the warm colours and comfy seats. Each of the inner surfaces of the covers features some shelving and a section which opens out to expand the footprint beyond the cover. The inside of the central spine includes a cupboard and a cool looking owl statue, which uses an unprinted Owl figure to great effect. 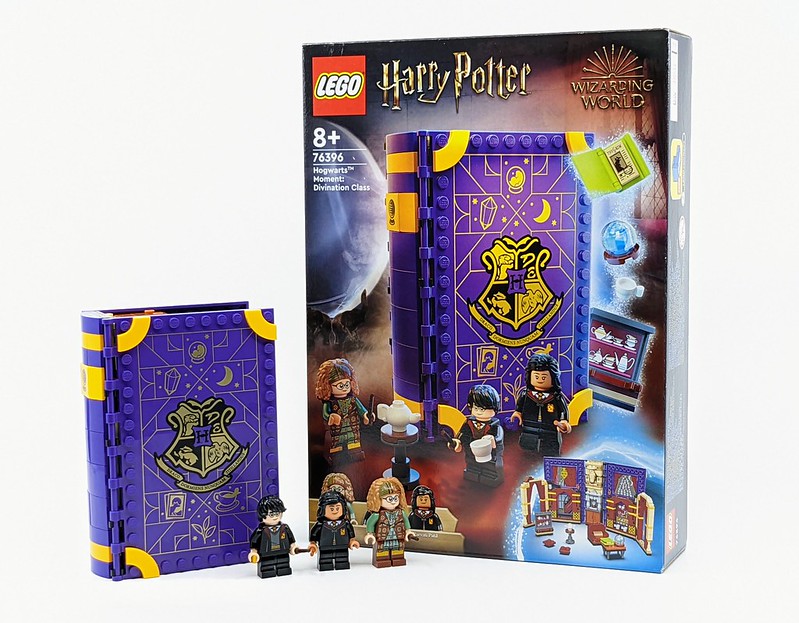 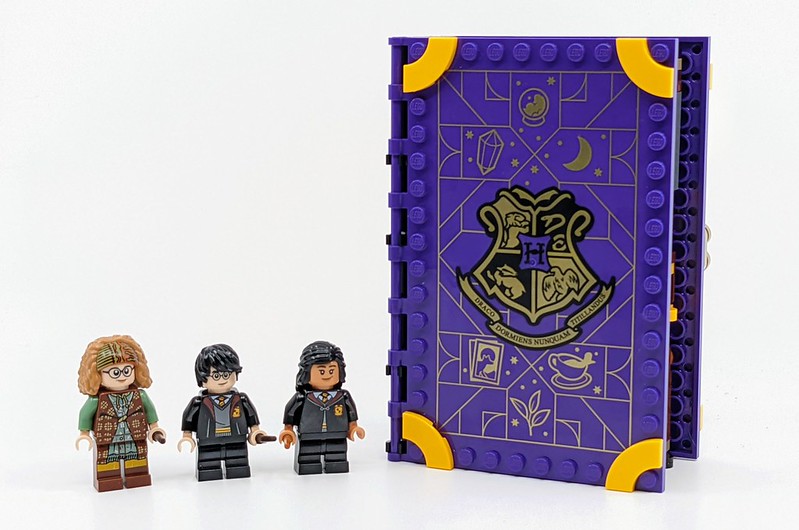 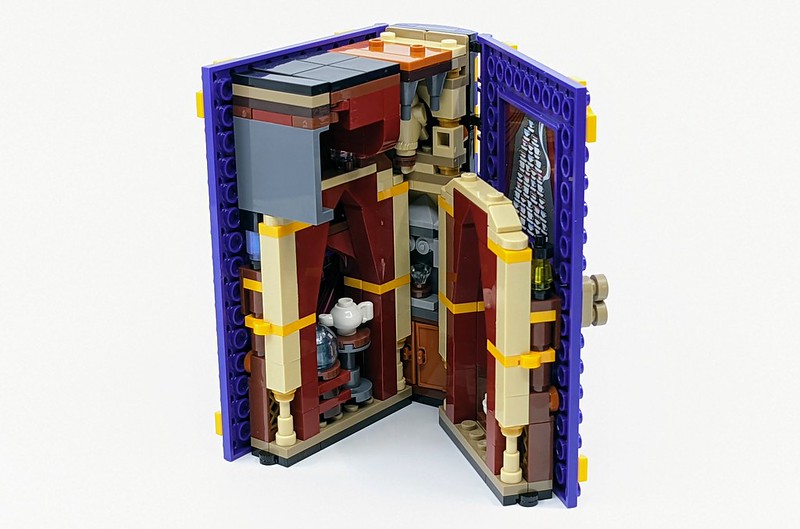 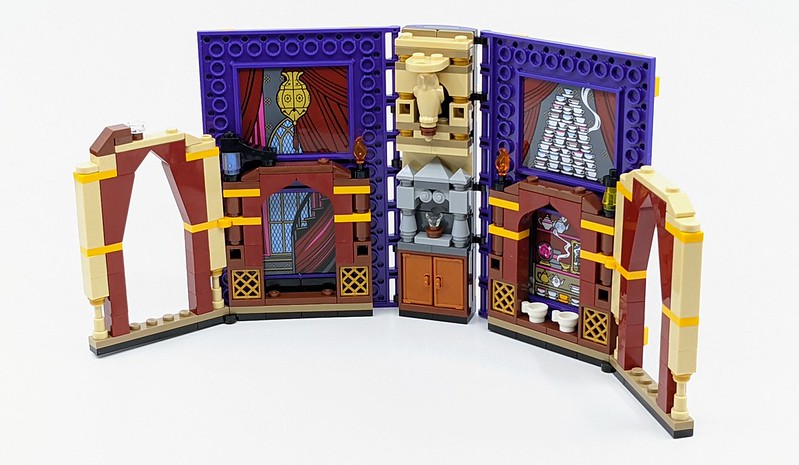 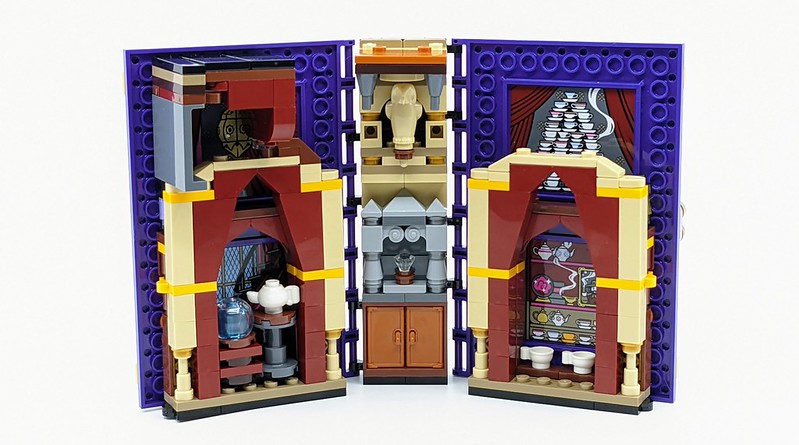 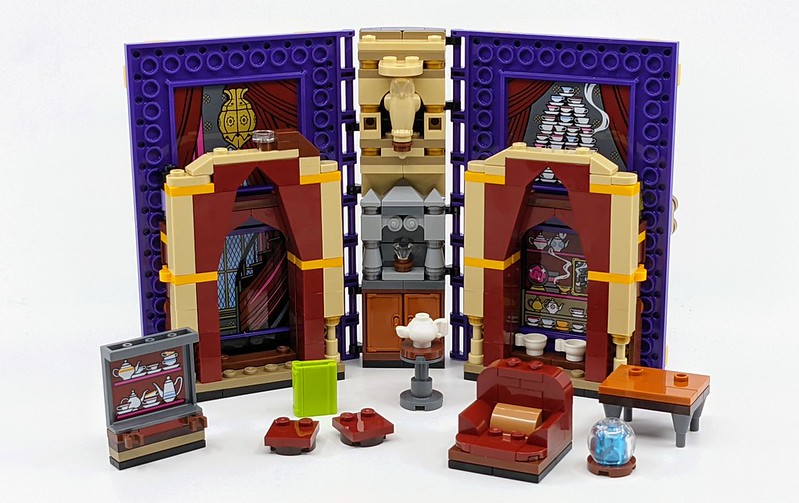 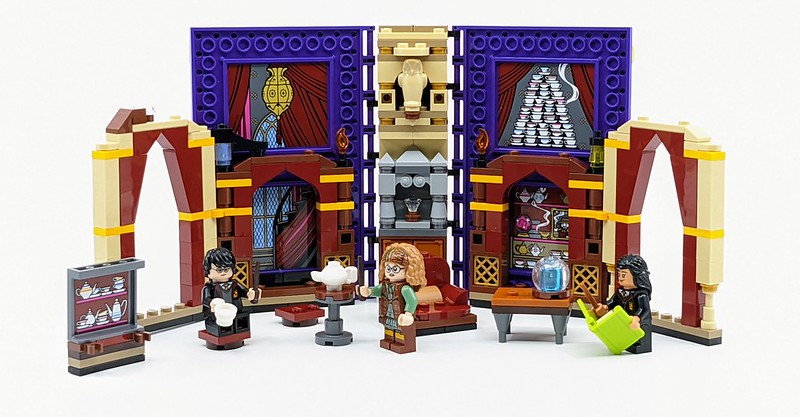 Minifigure wise the set includes three characters, all have appeared in minifigure-form before but these versions are all exclusive to this set. Professor Trelawney is the most exciting of the three and greatly differs from her Collectible Minifigures appearance. 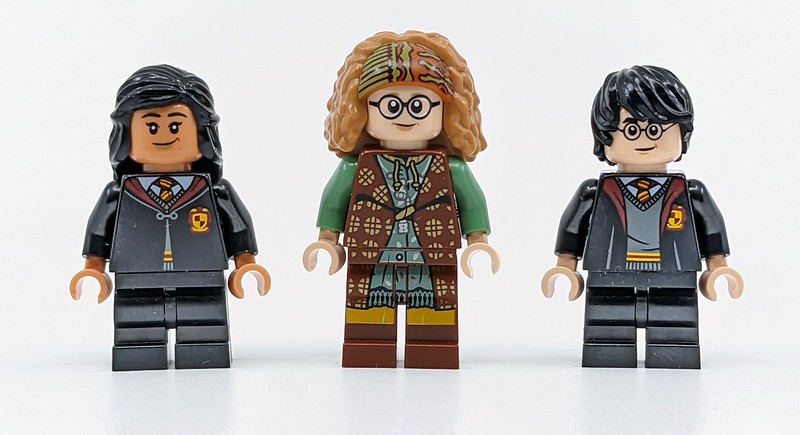 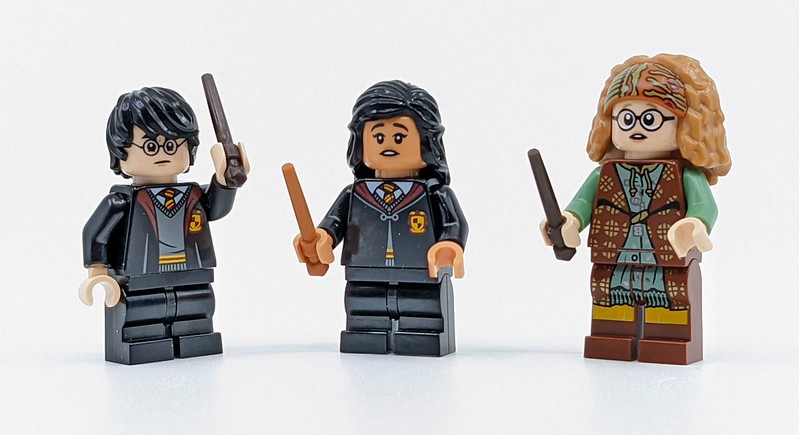 As the name suggests the Defense of the Dark Arts class is a rather dark and foreboding class. This is shown with the darker tones of the elements used to create the classroom setting. The configuration of the class is different to Divination, so one side opens out like a page of a book, but the central section also features a fold-out wall. The additional furnishings include a chalkboard, a desk and a great truck chest, which has only appeared in the Harry Potter sets up to now. 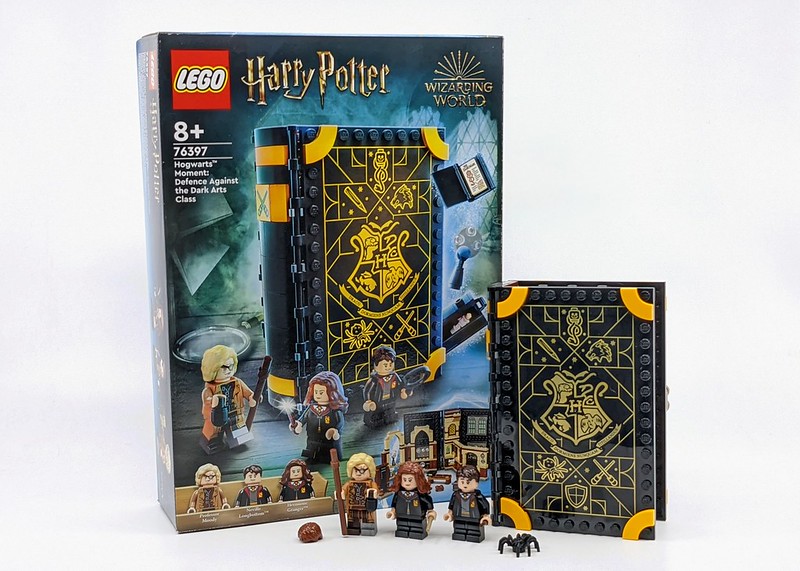 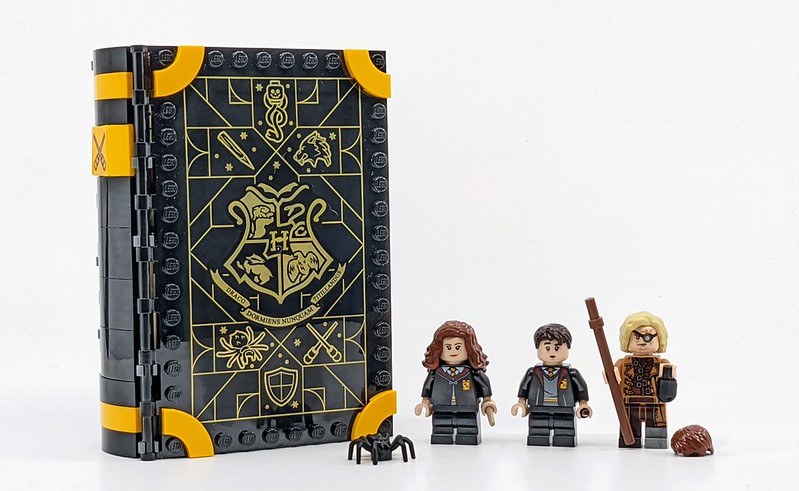 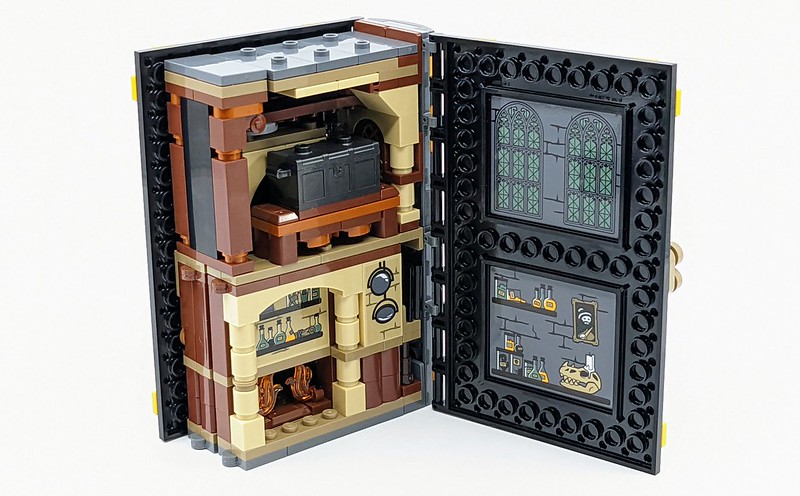 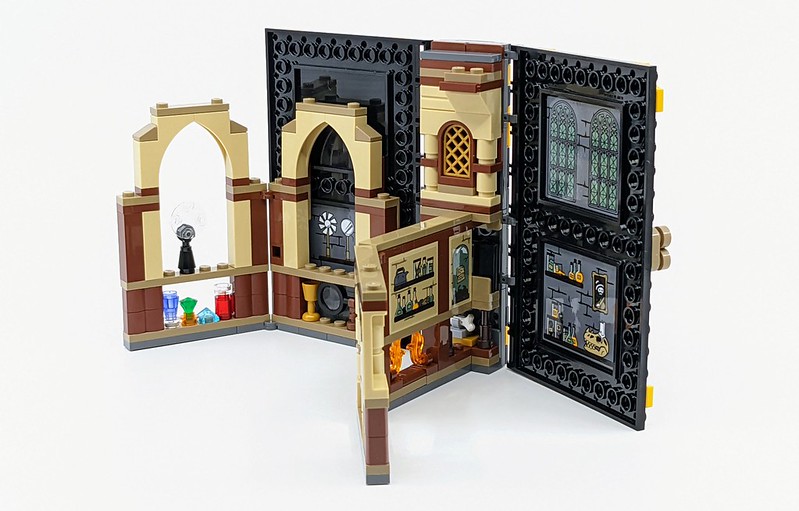 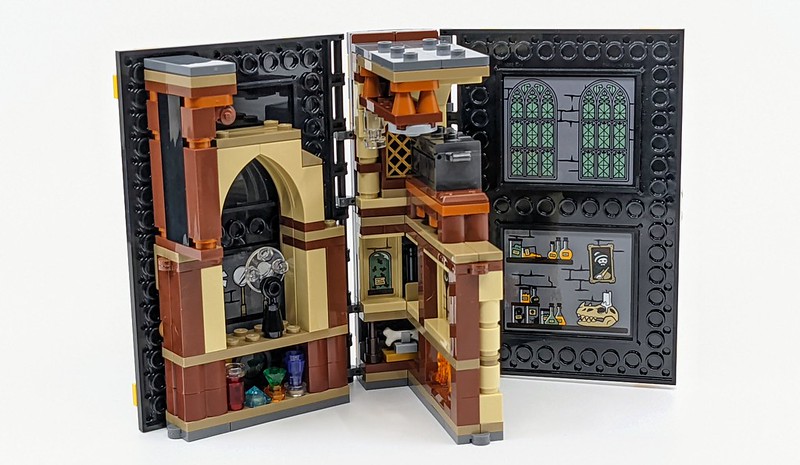 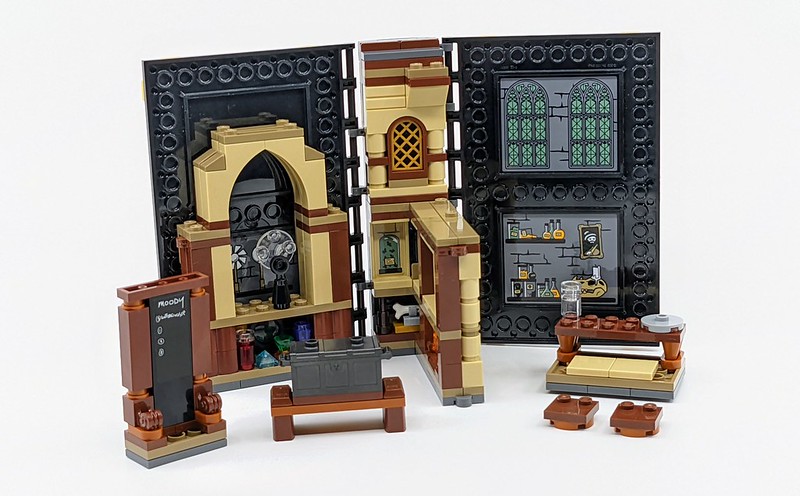 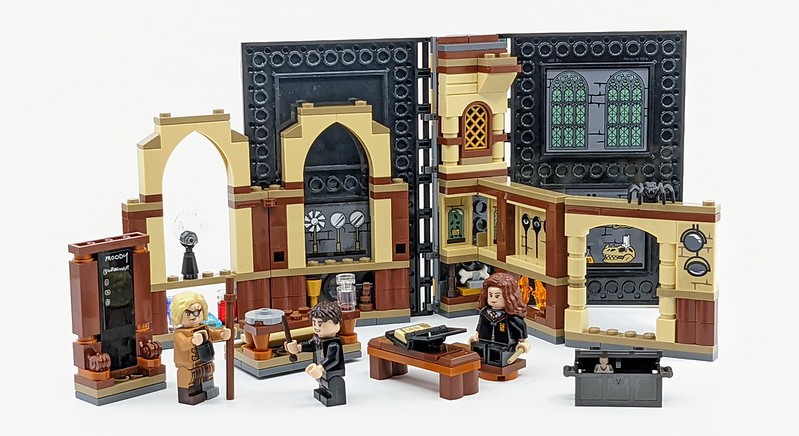 Technically this set includes 5 characters, although only three minifigures are actually featured in the set. All of their designs are exclusive to this particular set but variants have appeared in sets before. Mad-Eye Moody is very similar to the CMF version, just with slightly different colouring to his clothing. He also has a dual face, switching it around and swapping out the hair, will transform Alastor into Barty Crouch Jr. Inside the trunk, you’ll also find a microfig version of Mad-Eye. As for the two students, their outfits have been used for a number of different characters, but the combination of those and the faces make them unique. 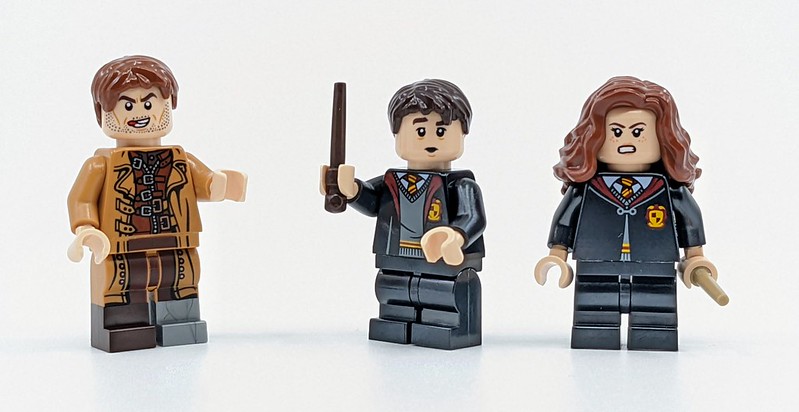