I have the privilege of being offered a number of upcoming LEGO® sets to review. That often means the sets I buy for myself sit unbuilt for a long time. I recently picked up the latest LEGO Ideas set, and couldn’t wait so I cracked it open to give it a build. Now a typewriter may not seem like a great source of inspiration for a LEGO set but I can assure you it is unlike anything else. All these weird and wonderful buildable items we’ve been treated to recently are really interesting and this has to be the pinnacle of those sets. So here’s my brief thoughts on the brand new LEGO Ideas Typewriter. 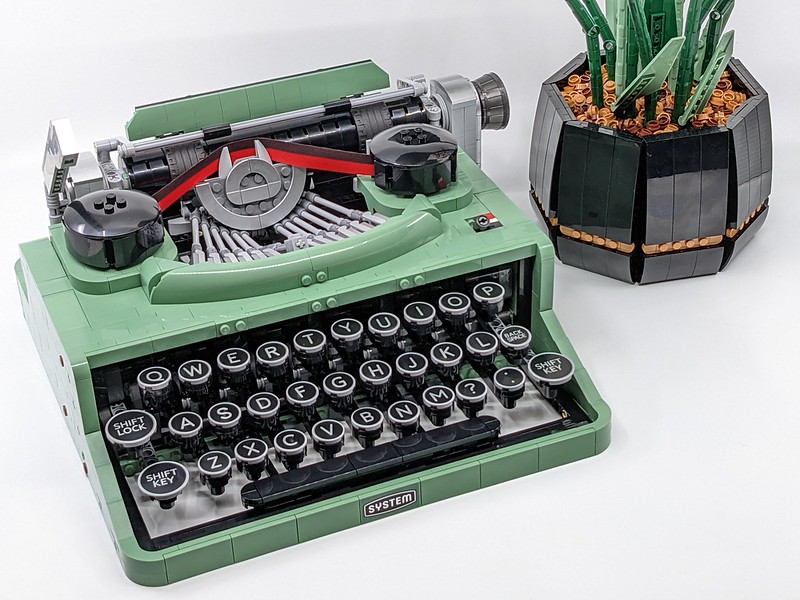 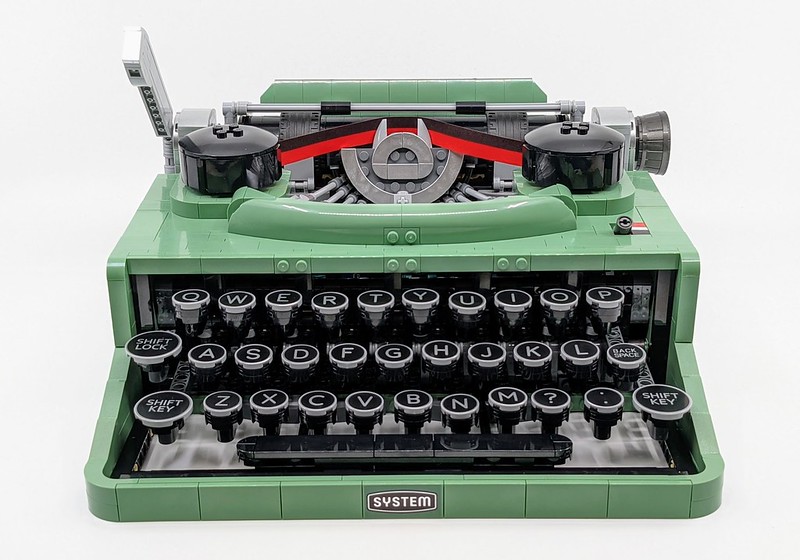 A typewriter is the product of a bygone era. But for its time it was a technical marvel. Translating that mechanism into a LEGO build is certainly no mean feat. During a presentation as part of Fan Media Days, the Ideas Design Team showed the set off and described it as a Technic model in a System shell and that description perfectly sums up the set. The inner workings of the Typewriter rely heavily on Technic pieces. The long axles used in the Botanical Collection Bouquet set acts as a backbone to a series of levers. Seemingly simple gears combine to recreate the familiar feel and motions of the machine it’s trying to ape. 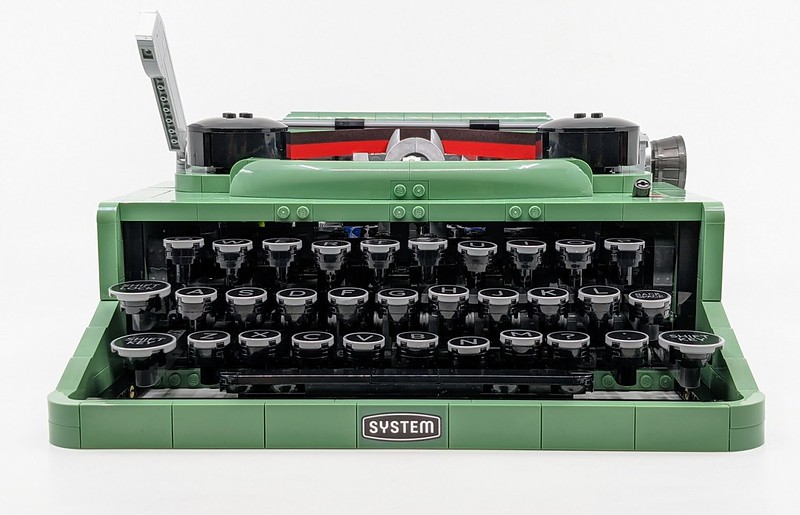 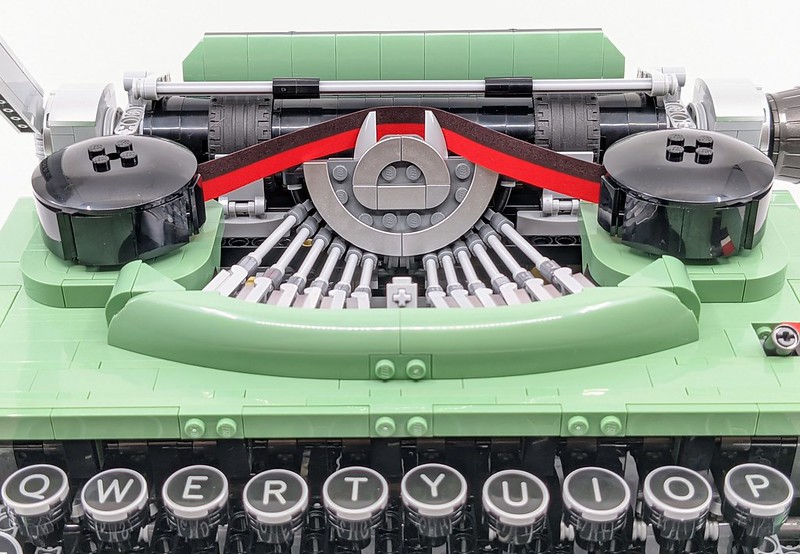 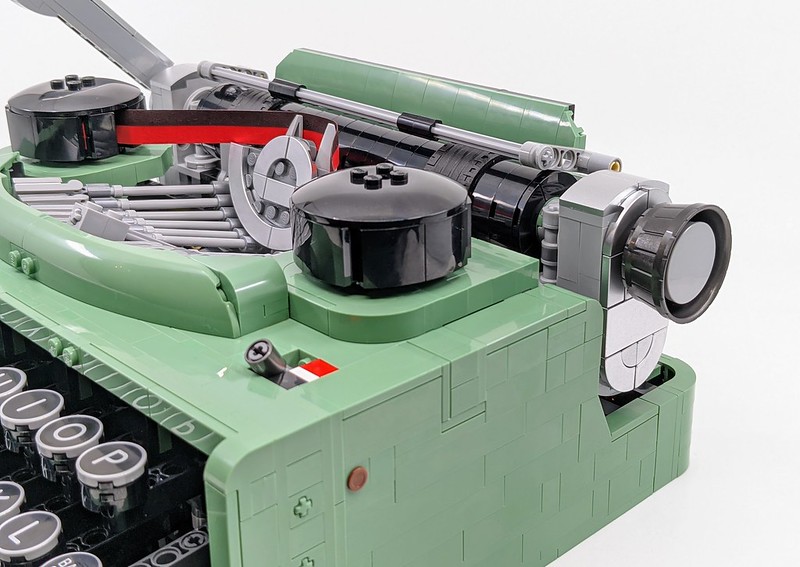 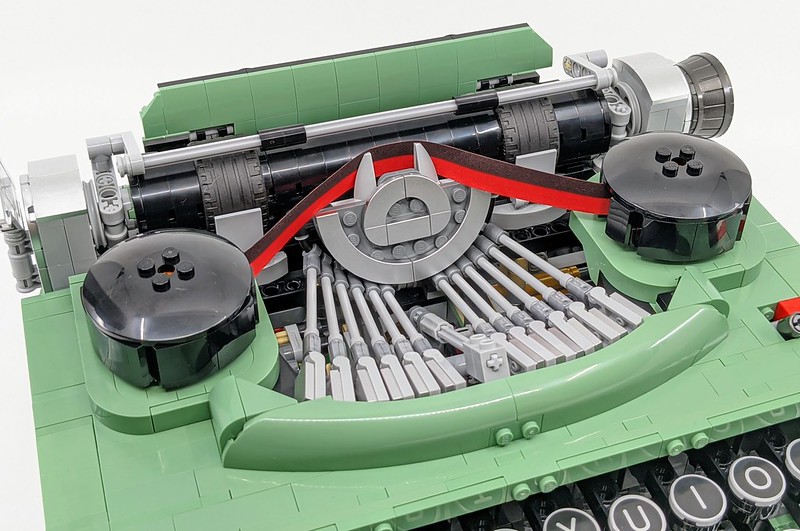 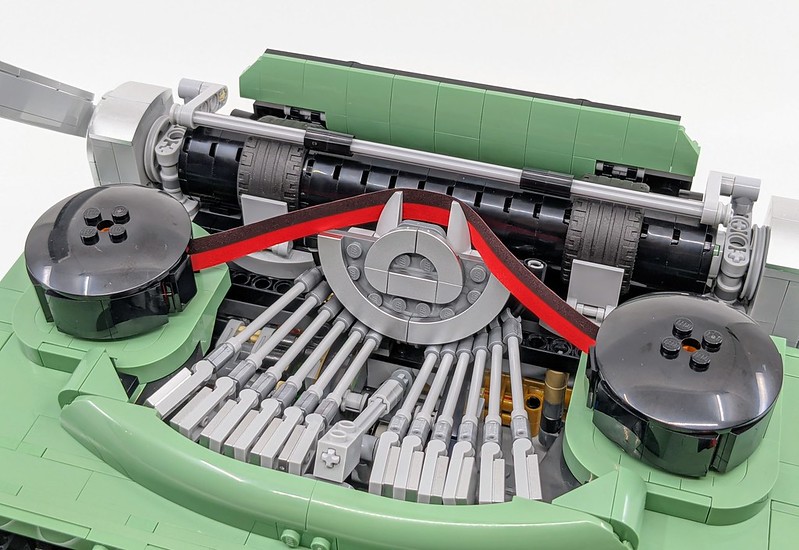 The resulting build is incredible. Being able to press down keys and see the letter arm spring forward is great fun. Combining this with the ability for the paper bail to move as you type is an impressive feat of LEGO engineering. Not to mention zipping it back is very satisfying. It’s a set that has really got to be seen to be fully appreciated. Putting together the inner workings is just as impressive as the functional elements are once it’s built. 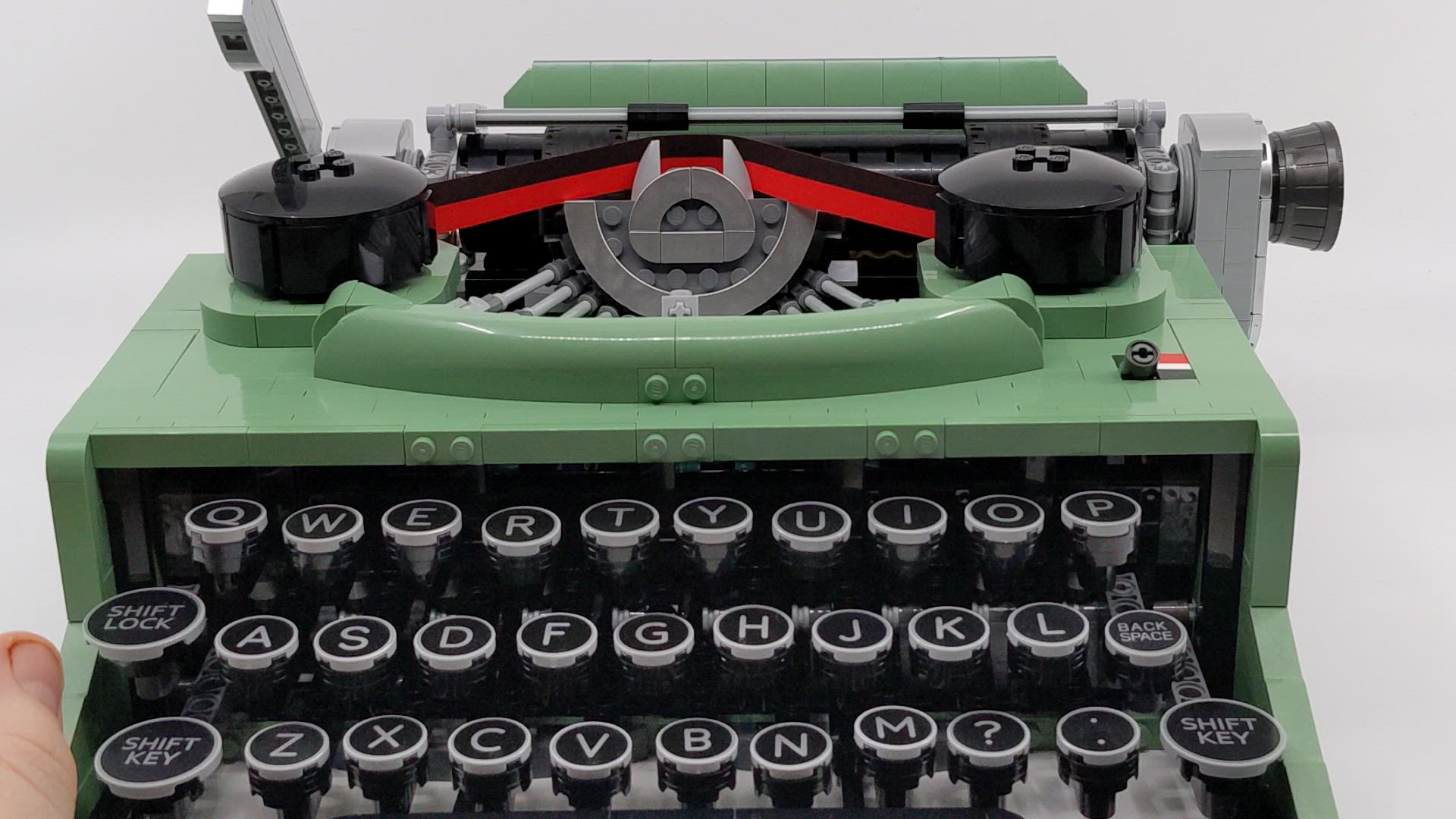 The story behind its conception also adds to the charm. Fan Designer Steve Guinness was inspired to create the original Ideas project from an old photo of LEGO founder Ole Kirk Kristiansen. This has greatly added to the set and having great-grandson and current owner Thomas Kirk Kristiansen pen a letter for the set, which is included in over 40 languages is a lovely touch. Other little touches mentioned by the Ideas Team include using stickers for some of the details on the shell of the Typewriter as they could then be shiny. The sticker on the rear also includes an Easter Egg connected to Steve inspired by the motto ‘Never Give Up On Your Dreams’. 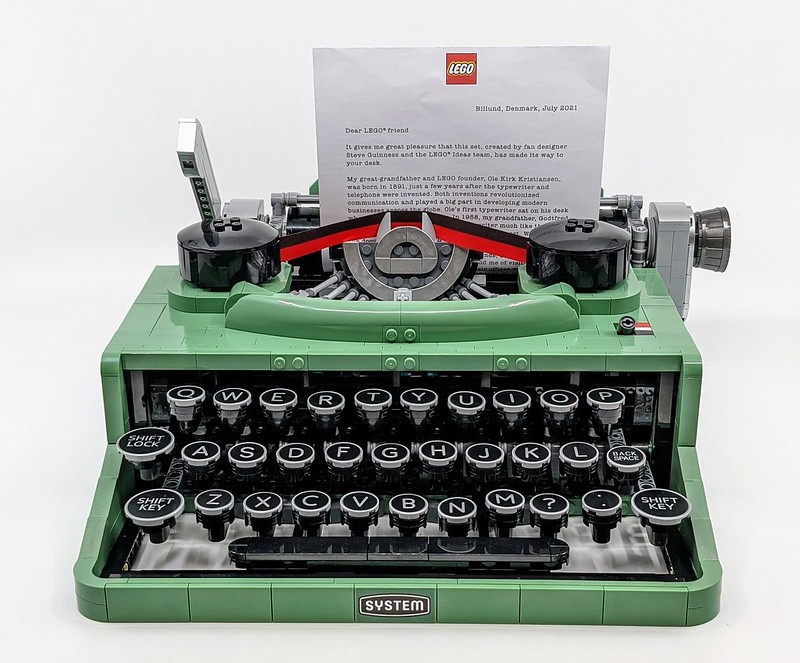 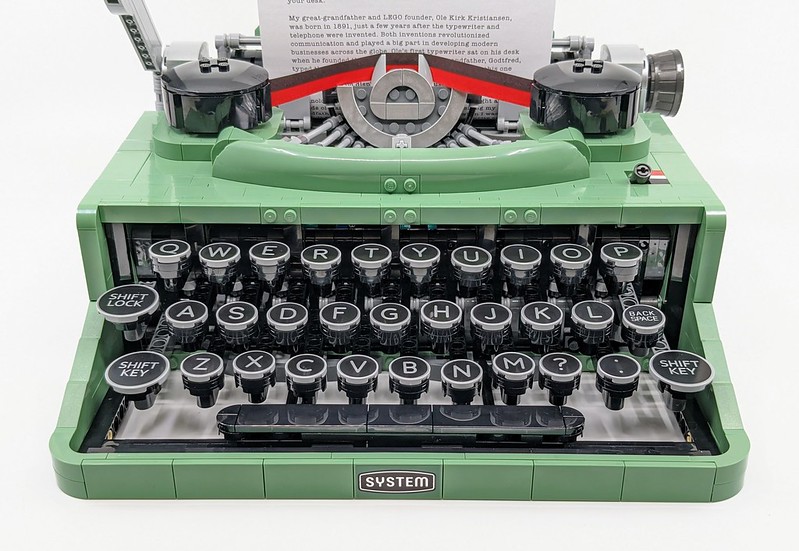 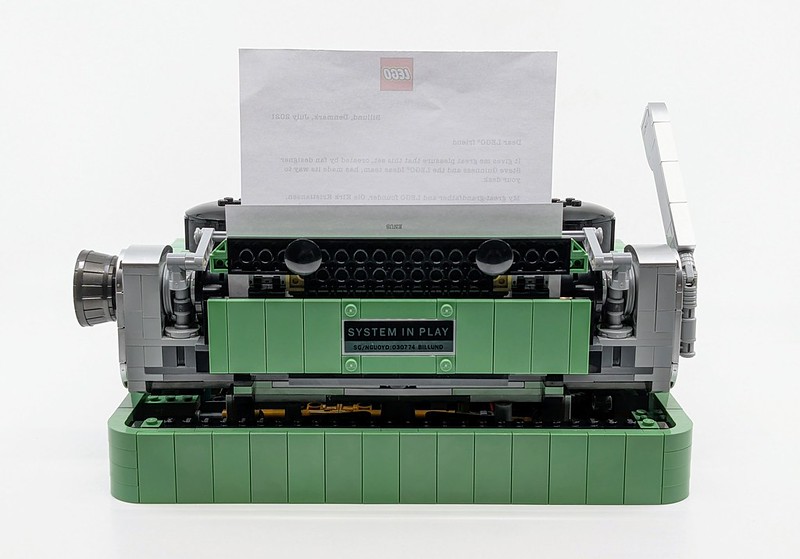 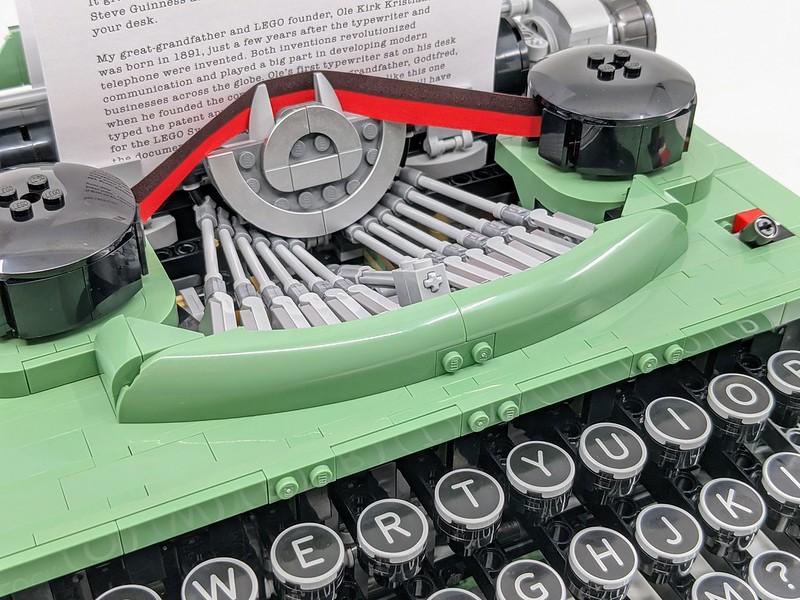 LEGO Ideas continues to provide an impressive array of sets. As fun as the sets based on popular IPs are, they pale in comparison to the originals ideas. Who knew it would ever be possible to create a brick-built Ship in a Bottle or a working Pop-up Book, the same can be certainly be attached to the Typewriter. This set is proof that just about anything you can imagine could be built with LEGO elements.