Last year I partook in an AFOL interview for Bricks McGee aka Richard Carter, who has returned the favour by being the subject of the latest BricksChatz interview. Richard has in hands in many different LEGO® related projects from commission builds to community get togethers, not to mention are passion for LEGO trains. All of which he speaks about below. 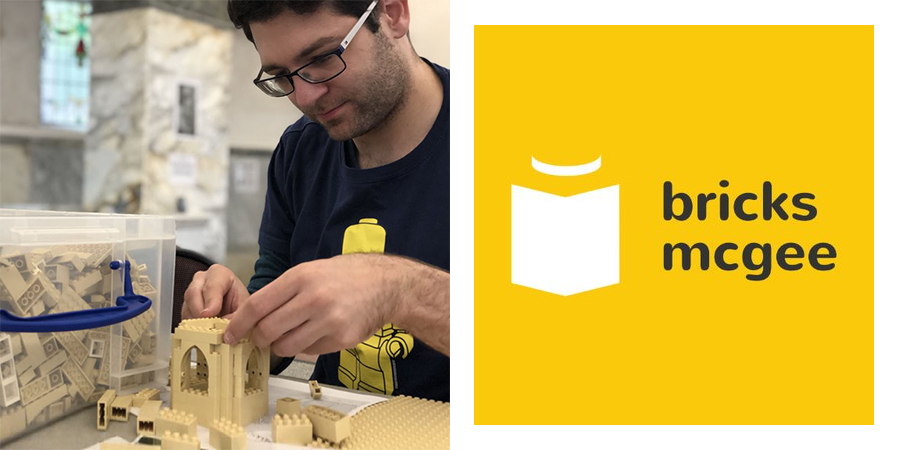 Q1. What is your earliest memory of LEGO?

Getting 6396 LEGO Town Airport. I remember building it one Christmas Day on the carpet of my uncle’s living room floor. It took me longer than I’d ever admit now, and I’ve spent endless hours playing with it as a child. Nowadays, I know it’s in my collection but I’m not sure where!

Q2. What is your favourite LEGO Theme?

I’ve always been a big LEGO City fan: they’ve traditionally been the platform for LEGO City train sets, and I think I’d have been a town planner in a previous life. I love organising my LEGO city around train tracks and public transport hubs. You could call me a bit of an infrastructure nerd.

I’ve recently started collecting LEGO Indiana Jones (both waves), and the Lone Ranger sets – I love the play features and character design for minifigures in these sets, and I stupidly overlooked them at the time they were out!

Justin Ramsden’s Apocalypseburg set is incredible, too. It’s so beautifully designed, with many small details the average builder would miss. I have a huge regard for his LEGO models in particular (nothing to do with the fact he’s from Teesside originally, and is an honorary member of my local LUG, Brick Alley!).

LEGO City has to be my all-time favourite theme, though – I love the new wave of firefighter sets, especially the burger bar!

Q3. What is your all time favourite LEGO set and why?

I really love 6399 LEGO Airport Monorail. I got it as a child, and I was obsessed! Such a shame it didn’t continue beyond that era. It was such an ambitious LEGO set – the whole monorail and the two stations were so nicely designed; I always loved the little burger bar at one of the stations. And it tied in brilliantly with the other LEGO sets at the time, too. You really could build an entire city!

Q4. Do you have a favourite LEGO Minifigure?

There are too many to pick from! I’m very keen any figure that will sit nicely is city/town scenes, and the collectible minifigure series has brought some fantastic figures along since it started.

Two minifigures I have been very keen to collect are the welder (for my port and railway scenes), and the Police Officer (Bobby), as they fill roles in my city that are otherwise not so well fulfilled.

I think my all time favourite, though, has to be the sea captain, purely for the seagull accessory. I have around 100 of the seagulls, just because I love them so much – living in Newcastle upon Tyne, I see a lot of gulls and seabirds – so I suppose they remind me of home! 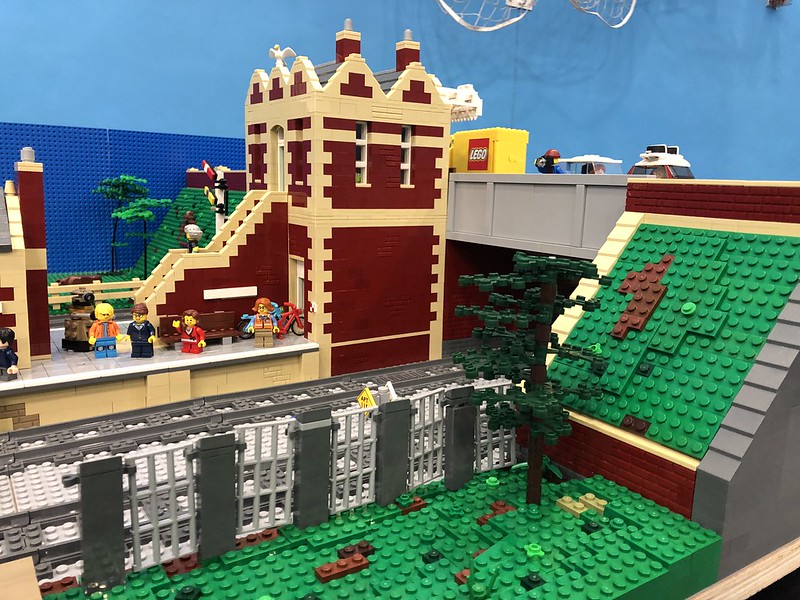 Q5. If you had an unlimited number of LEGO bricks what would you build?

Easy! The entirety of the East Coast Main Line railway in LEGO, to a 1:48 scale or so. I am totally train (and LEGO) obsessed, and this would fill my time until my death quite happily. Like most builders, I suspect it’s not the amount of bricks that worries me, but the ability to store the models once built!

Q6. You’ve created an adult-focused LEGO get-together called Bricks + Beers, how did that come about?

I’m involved in a lot of LEGO events, from kids in museums and schools in my LEGO workshops, to shows such as Discovery and Shildon, in Newcastle and County Durham respectively.

I was often asked “what about something for the adults?” at kid-centric events, and I devised Bricks + Beers from that. For the first few events, I borrowed heavily from London AFOLs events – they seemed to be the perfect mix of silly and fun for adults with their challenges, and were based in a pub – the Princess Louise, in Holborn – at the time. Since starting it, the format has deviated quite a bit.

Bricks + Beers isn’t a LEGO User Group – there are plenty of those in the UK already – and we target a different audience. Bricks + Beers don’t so much target the average AFOL, as someone who has forgotten their love of LEGO bricks (it’s common their parents have put it away in the loft!), and they want to reconnect with that fun, creative side LEGO brings out.

We do a mix of silly challenges (could you build a hybrid animal that’s a monkey and a crab?), as well as more competitive challenges such as speed builds. Last November, we built a big LEGO wreath for the 100th anniversary of the First World War’s ceasefire – this was then on show at Shildon Brick Show at Locomotion Museum.

It’s become a community event, so if anyone fancies starting one, get in touch! 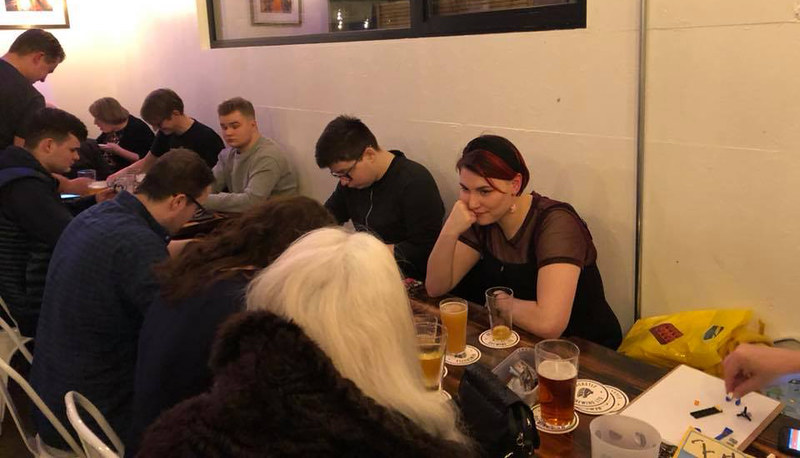 Q7. What other LEGO creations have inspired you?

I love the work of collaboration such as PennLUG and Texas Brick Rail Road displays, and my LUG has a whole range of talent from Jack who designed this huge LEGO railway station, to Steve Mayes (@brickthis) who continually releases truly stunning models.

Q8. What LEGO-based projects are you working on next?

Personally, I tend to work on 4 – 5 models concurrently – it gives me the freedom to work on something else if I get stuck. A suburban scene with terraced houses is next on my list – I’m still working on a plan for these.

Commissions-wise, I’m currently working on an industrial machine model for a client which is looking slick so far, and my usual mix of workshops for museum and corporate clients. I love the mix of clients I get – and (re)introducing them to LEGO bricks is such a pleasure!

As a rule, it tends to be whatever model I’m working on, until I get bored with it!
I’m really fond of my LEGO city museum, which is still a work in progress. It’s based on the facade of the Customs House Theatre in South Shields – I built that for an exhibition a few years ago, and fell in love with it – had to have one for myself. 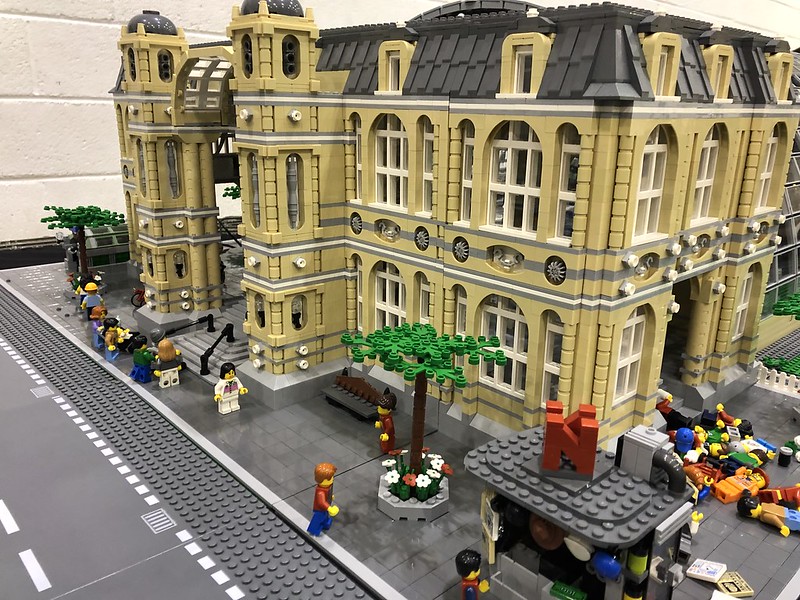 Q10. You’re big on the event scene, what do you like to display?

I love LEGO trains an unhealthy amount. My LEGO city, Amchester (a bit of a portmanteau between Manchester and Ambridge, the village in BBC Radio 4 serial The Archers) is a city with a lot of public transport (trains, trams, buses…).

For LEGO shows, I build a lot of railway stations and scenery. I founded LEGO Northern UK Railway (LNUR) with two other members (Jack and James) in 2017 as a LEGO train club for the North of England and Scotland, and we collaborate all year round on LEGO railway displays for the public. We now have around 20 members, and many more followers interested in our antics.

A highlight LEGO build in 2018 was my 6ft long LEGO railway bridge, which hasn’t been at any other show since Bricktastic due to logistics. I’m hoping it’ll make an reappearance at Shildon Brick Show later this year in November.

Q11. As you mentioned you have a particular passion for LEGO trains, what is it about this particular section of LEGO that is so engaging?

I think the main factor here is movement – kids who love LEGO will come and visit shows, but static models tend to be overlooked to a certain degree, no matter how brilliant they are.

A LEGO railway gives you the opportunity to build pretty much anything; trees, warehouses, cars, roads, valleys, mountains, rivers, and the space needed to run even a small railway means there’s plenty of space for all of these.

I primarily build railway landscapes and infrastructure such as bridges and stations, as LNUR has so many talented members focused on locomotives and rolling stock. The ability to swap trains on display over at a reasonable frequency makes for a more interesting display, too: you can view it twice and not see the same things.  We get a lot of requests for Thomas the Tank Engine (a model by Ryan and co from Australia) to run, as well as William’s Hogwarts Express. 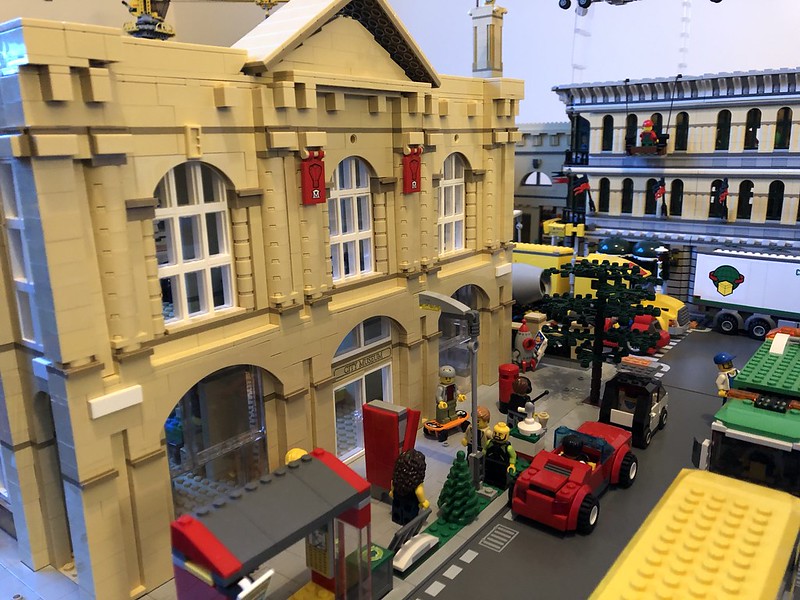 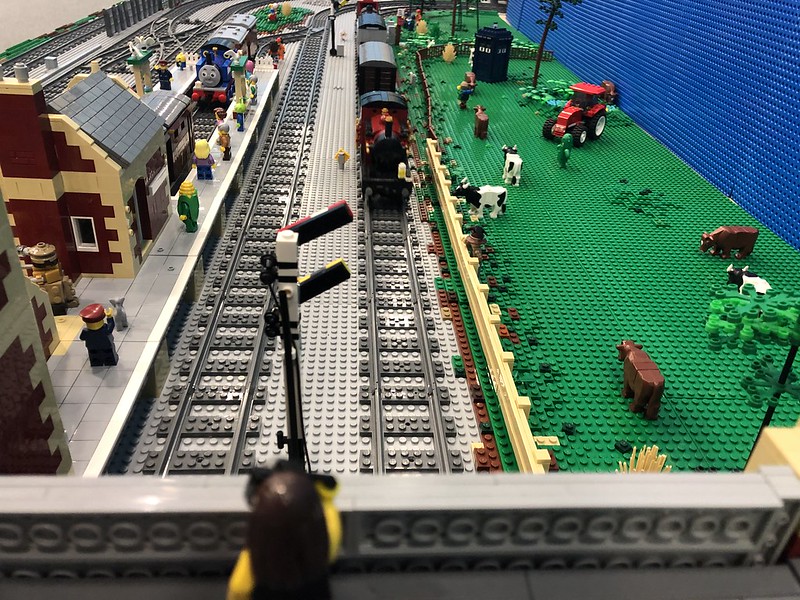