Are You Ready To Rebuild The World With LEGO

Home » News » Are You Ready To Rebuild The World With LEGO

Today the LEGO Group launch their Rebuild The World campaign with an amazing new advert. The essence of LEGO® has always been that it used to build whatever you want, which plays a big part in this new campaign. The Easter Egg-filled video showcases how you can create anything your imagination can dream of. Creativity plays a major part in all aspects of life, no matter your age. As well as this fun video, the Rebuild The World campaign will flow into workshops, in-store events at LEGO Stores and online activities in which anyone can grab some LEGO bricks and get rebuilding. Check out the video below, how many LEGO Easter Eggs can you spot?

Today, the LEGO Group and musician Mark Ronson launch Rebuild The World, a campaign to help nurture the creative skills of the next generation.

Over 100 children will meet Mark and other inspiring figures, such as 19-year-old David Aguilar, who built several prosthetic arms from LEGO® elements, at the LEGO House, Billund, to explore the infinite potential of creativity. Their imaginations will also be fired up in a series of workshops, where they’ll be challenged to rebuild the world they see around them.

“My whole career has been about working with brilliant, creative people and seeing where our imaginations take us. Rebuild The World, is a wonderful opportunity to help inspire the next generation of creators who will come up with their own ideas to shape the future of everything from the way we live to the music we listen to,” explains Mark Ronson.

The LEGO Group believes that every child is born with incredible creative problem-solving capabilities, but we need to act now to nurture that creativity so that it can become a lifelong skill, as the future depends on it.

Inspiring creativity is more critical and urgent than ever. The World Economic Forum Future of Jobs Report places creative problem solving in the top three skills the job market will require from 2020. Imaginative play helps children learn how to innovate, problem solve and think critically throughout their lives.

Mark Ronson will also be joined by representatives from other creative fields to discuss why it’s more important than ever to help nurture creativity as a key skill so that the builders of tomorrow can succeed in an ever-changing world.

Julia Goldin, Chief Marketing Officer, The LEGO Group, said: “Rebuild The World is all about seeing where imagination takes us and celebrating the natural creativity of children. We want to encourage kids around the world to develop and retain these skills as they grow older. With this campaign, we want to inspire people of all ages to play and unleash their creativity to create a world of infinite possibilities.”

Meanwhile, British designer and inventor Dominic Wilcox will lead a series of Rebuilder Workshops on the 17th September. He, along with two other creatives, will challenge kids to reimagine iconic landmarks, invent new gadgets and solve everyday problems – all with LEGO bricks. Other LEGO professionals will lend a hand, helping the kids bring their incredible ideas to life.

“Who knows what will come out of today… a house with a hot air balloon for a roof?  A car with long legs to jump over the traffic ahead? No one sees the world quite like children so we’re excited to see what they come up with,” says Dominic Wilcox.

Kids around the world can also take part by sharing their creations on the LEGO Life app or by visiting www.lego.com/rebuild-the-world-challenge

The LEGO system has long been the ultimate platform for creative expression and creative problem solving. Children don’t just imagine what to build, they can build and rebuild. Experiment. Fail. Break the rules. Fail and Try again… This is the cycle of human creativity and the essence of the LEGO System in Play.

Now, we’re going even further. Through Rebuild The World, we want to inspire children to unleash their creativity, join the Rebuild The World challenge and rebuild a world of endless possibilities for real. Learn more by visiting www.lego.com/rebuild-the-world

Created by the LEGO Group’s internal agency with BETC Paris, the Rebuild the World campaign is the most ambitious global brand campaign ever. Directed by the multi award-winning Traktor collective, the adventure follows the chase between a clever rabbit and an unlucky hunter and unfolds in the kind of world that only LEGO play could create. Every character, animal and vehicle is based on an existing or past LEGO toy, so heads spin 360 degrees, everyday objects are outsized, and a boat can suddenly fly with a little help from a palm tree. 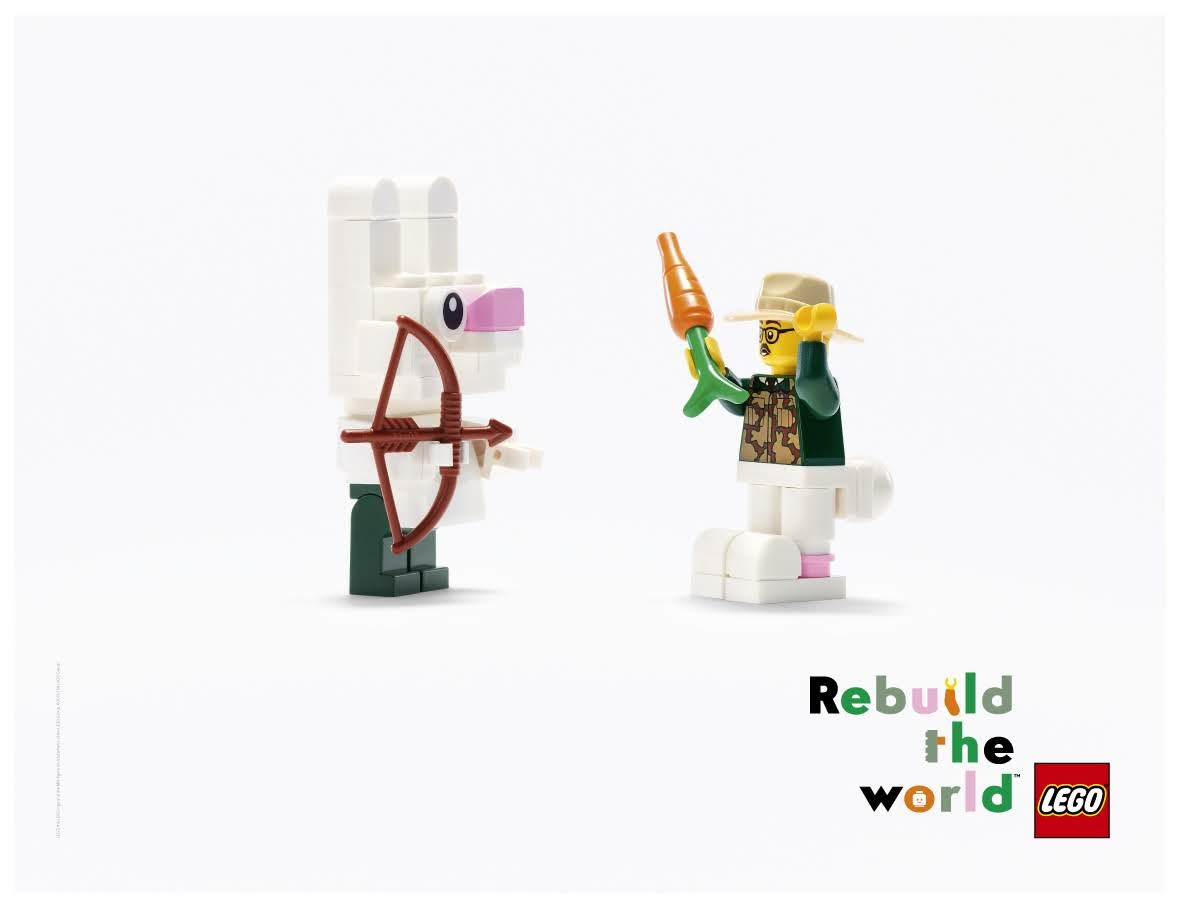 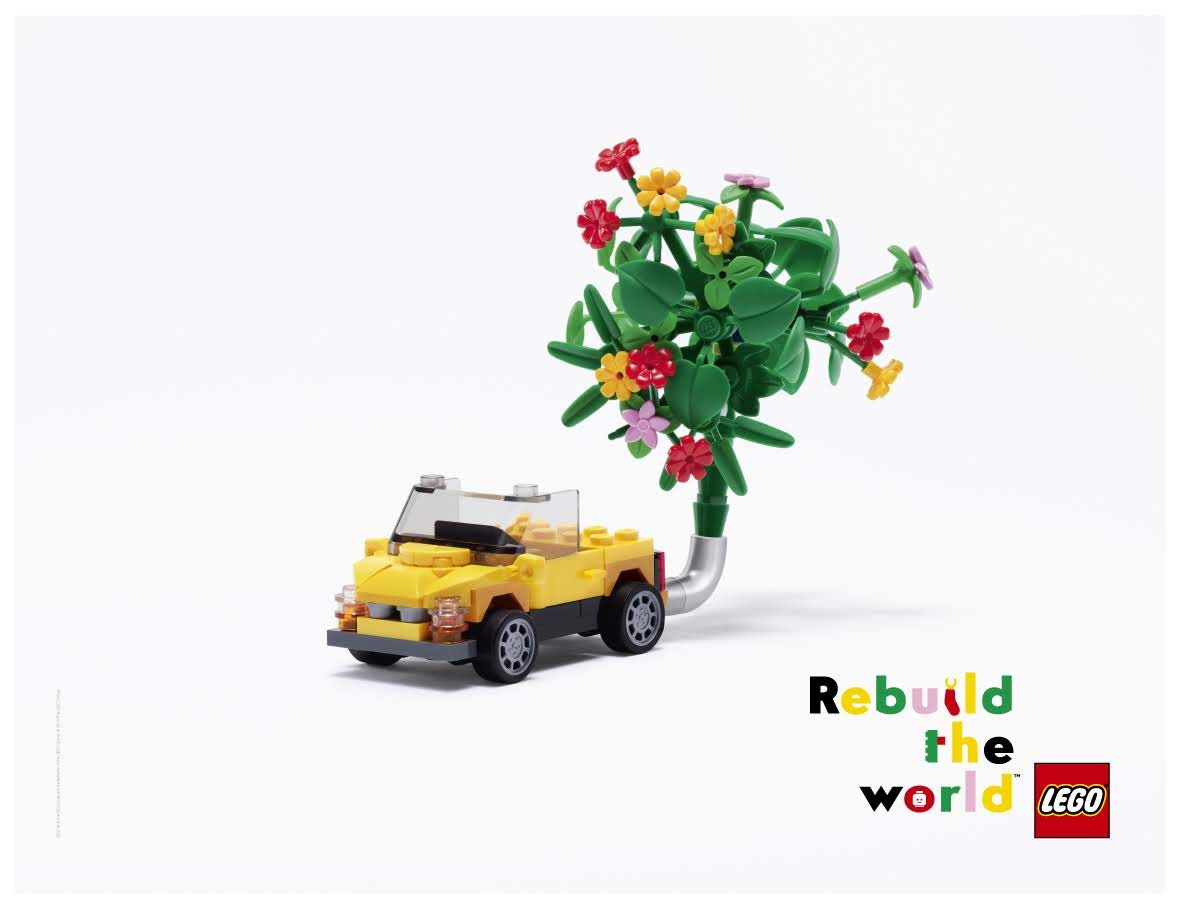 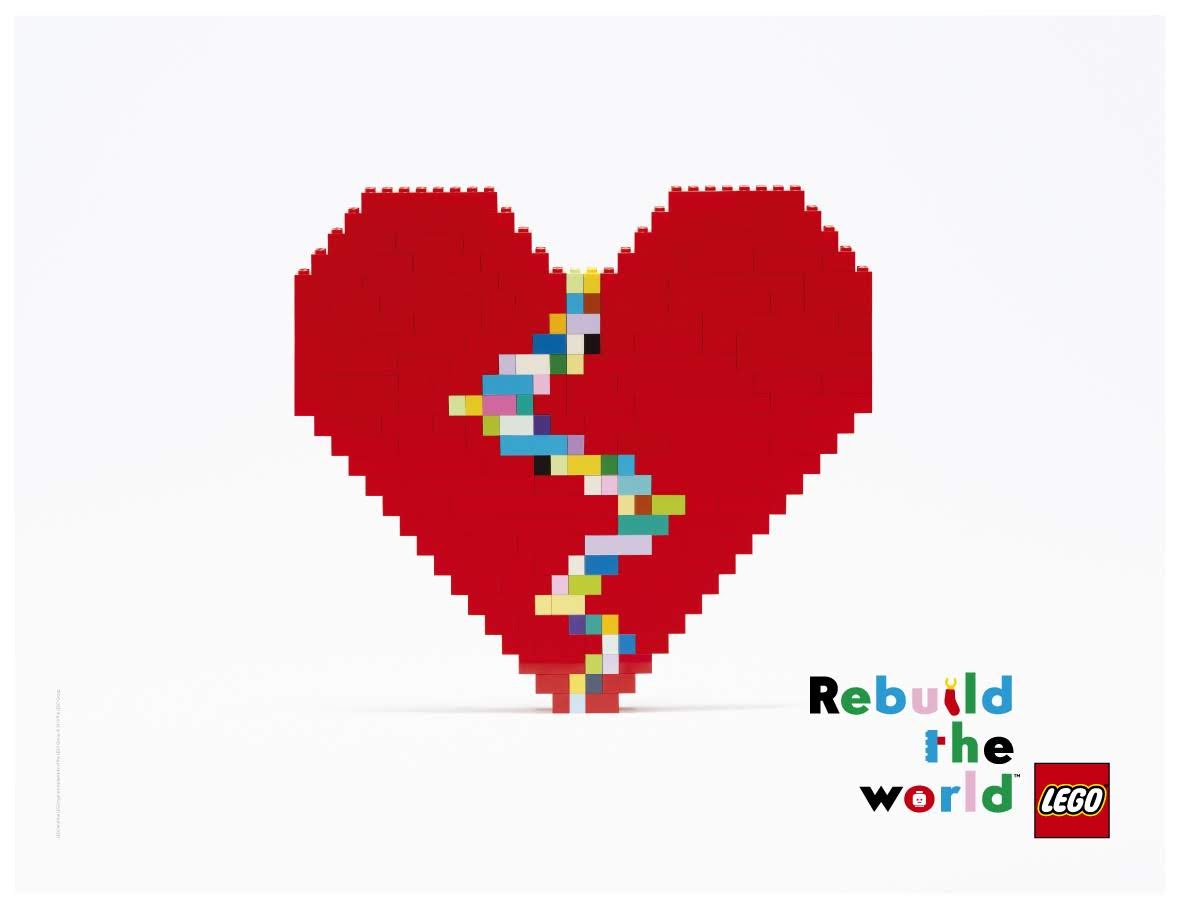