A Look At LEGO…. Spooky Minifigures

Halloween is here so its time to dust off another ghoulish special feature as we take A Look at LEGO…. Spooky Minifigures. Over the years there have been millions of minifigures created from classic LEGO Spacemen to little Hollywood legends. Although a few spooky faces have made  an appearance here and there, things got a little spooky in 2010 with the launch of the LEGO Collectible Minifigure range and ever since spooks, spectres and spirits of all shapes and sizes have found their way into LEGO sets left, right and centre.

The most iconic of the spooky minifigures comes from way back in ye olde times of yellow sunsets, crusaders and forestmen, with set 6034: Black Monarch’s Ghost featuring the very first Ghost minifigure and the very first glow-in-the-dark element. The original ghost was a rather cheerful being, featuring a spooky smile, backed by a plain black minifig head, on top of an all white minifig torso. As the years went by the Ghost minifigure was given legs in place of the 1×2 brick and tile elements. In 2006 our spooky friend had gained yellow hands, until the LEGO Ghost received it most recent and current re-design for the 2012’s Monster Fighters Theme. The Ghost once again became legless and lost the yellow hands, it was also given a ghoulish new face. 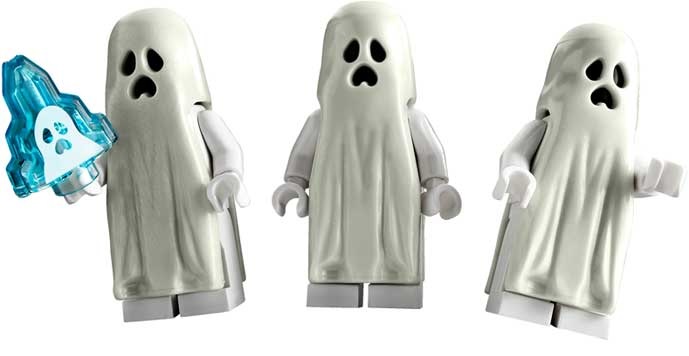 Another of the classic spooky minfigures is the Skeleton, and boy does he get around. The skeleton has appeared in sets as varied as Pirates, Castle, Atlantis and even Star Wars. The most recognizable of the skeleton variants is the classic white flavoured one, which first appeared in a trio of sets in 1995, two from the Castle theme and one from the Pirates theme. Since then it’s appeared in well over 50 sets. The Skeleton is characterized by a skull head element, a skeletal torso, clip on arms and legs. This standard design has also seen black versions, glow-in-the-dark versions and armored versions among many others. 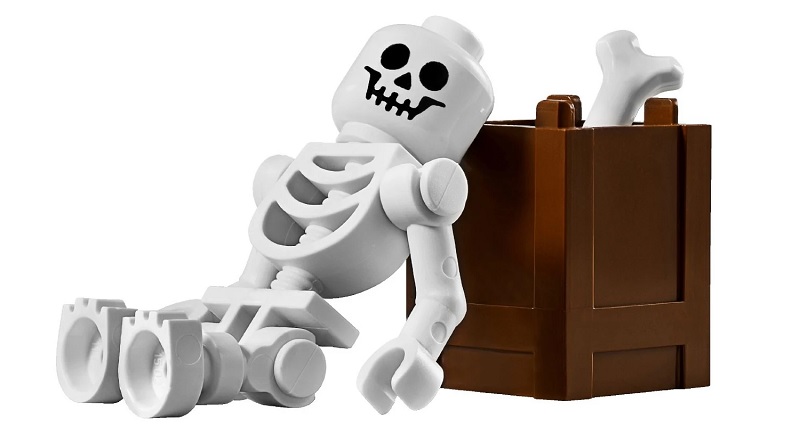 Our next look at spooky minifigures takes us back in time, then forward in time, then back…. basically it’s all about time with 1996’s Time Cruisers theme. This time travelling range saw two era-leaping fractions battle across time completing secret missions along the way. The evil Time Twisters were accompanied by a classic Ghost and Skeleton along with a rather dapper looking Wizard Skeleton and a chap called the Time Twister, who appeared in the Time Cruisers board game. He was the first ever minifigure to use the Skeleton head on a standard minifigure torso.

The stop-motion inspired LEGO Studios theme was created to help budding LEGO movie makers, build and film there own mini masterpieces. LEGO Studios bought us minifigure versions of classic movie monsters such as The Mummy, Frankenstein’s Monster, a Vampire and the Hutchback. Many of whom would reappear in other LEGO themes and some of the LEGO Studios sets would be reimagined as Monster Fighters sets. 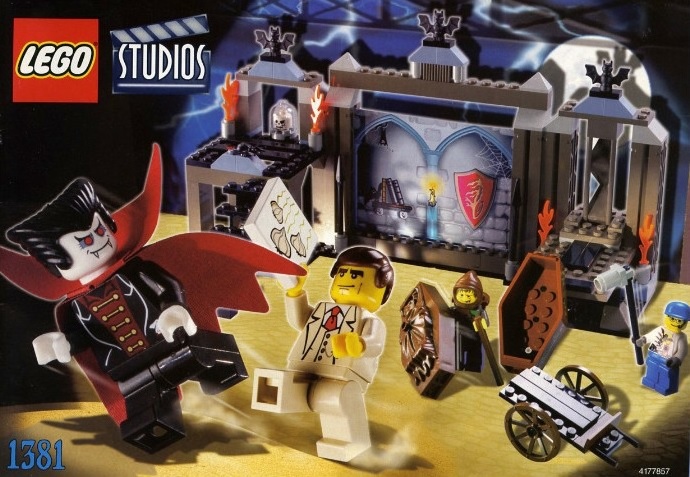 But the undead takes many forms even in LEGOLAND. In 2011 the spooky goings on moved to ancient Egypt with the Pharaoh’s Quest theme. This was a spiritual successor to 1998’s Adventures range, which featured the first ever LEGO Mummy minifigure. Much like the Monster Fighters theme, Pharaoh’s Quest saw good versus evil, with a fearless team of adventurers battling Amset-Ra and his undead army of Mummy Warriors. The spooky minifigures also took the form of winged mummies and the Anubis Guards. 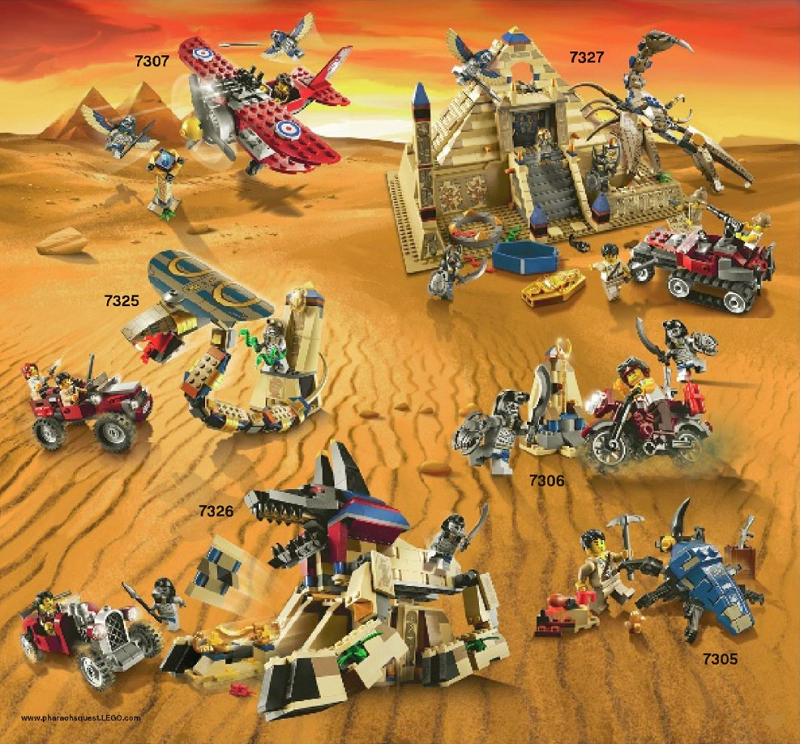 Many of the spooky minifigures we’ve come to love, have featured in the mega popular LEGO Minifigures range, which debuted in 2010. These blind bagged collectibles have featured a number of monstrous minifigures, With Series 1 kicking things off in-style, with the much sort after Zombie minifigure. Across the next few series we LEGO Minifigures also gave us a Vampire, Witch, Mummy, The Monster, The Werewolf, The Crazy Scientist, Vampire Bat, Mr Good & Evil and Medusa. 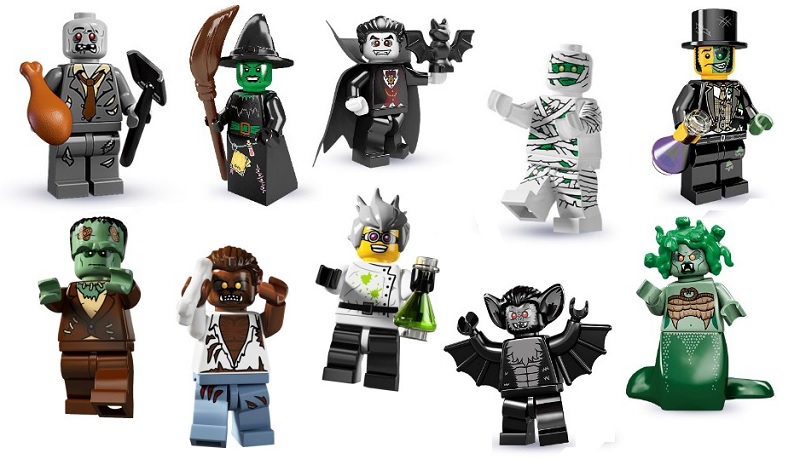 Despite all this spookiness creeping across LEGO themes, 2015 became to the spookiest year of all time for LEGO with the launch of the one-off Scooby-Doo theme and an entire series of LEGO Minifigures featuring monstrous characters. The Scooby-Doo theme technically doesn’t feature actual monsters as those spooky menaces as merely masked fiends, who would of gotten away with it, if it wasn’t for those pesky kids of Mystery Inc. Sets included the iconic Mystery Machine, a haunted Lighthouse and run down mansion. The theme also saw the release two animated LEGO Scooby-Doo movies and a LEGO Dimensions expansion pack. 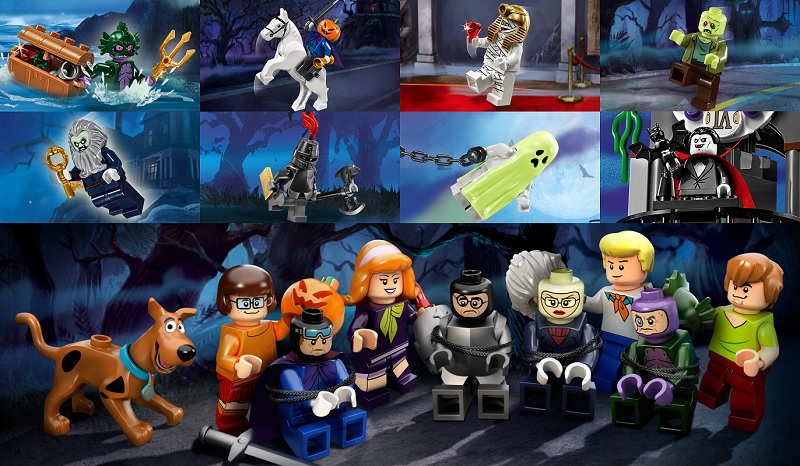 With standard series of LEGO Minifigures giving us a handful of spooky characters, Series 14 went all out with an entire gang of ghoulish minifigures. These ranged from actual monsters including three new zombies and a transformed werewolf version of Series 5’s Lumberjack, along with some fancy dress fans in the form of Skeleton Guy and Tiger Woman. This series of LEGO Minifigures introduced a lot of great elements but despite that, it wasn’t as popular as some of the other minifigure series.

Finally LEGO Dimensions has given us some amazing new characters, many of which have appeared in LEGO for the first time. The spookiest of these appeared in the final wave of expansion packs released in September. Beetlejuice is the ghost with the most and is joined by the Saturn sandworm. 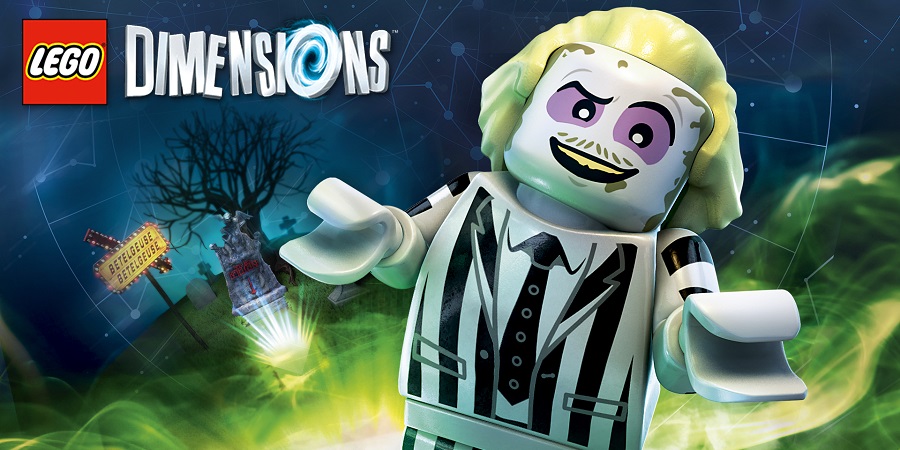