A Closer Look At The LEGO Amsterdam Store

Home » Events » A Closer Look At The LEGO Amsterdam Store

Last week a brand new flagship LEGO® store opened in Amsterdam and as I highlighted the other day, it’s quite the impressive looking store. Located in the Kalverstraat, Amsterdam, the store is filled with numerous LEGO built features as well as boasting other in-store services, all of which add to stores unique LEGO shopping experience. When creating the store’s interior, inspiration has been drawn from many famous things associated with Amsterdam. The PR team in Amsterdam have very kindly sent over some additional images from inside the store. These offer an even better look within the store and its many impressive LEGO features and builds. 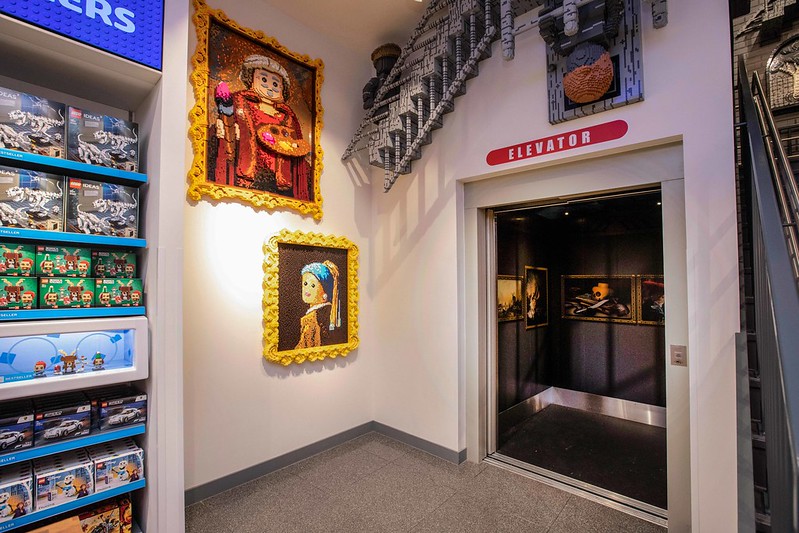 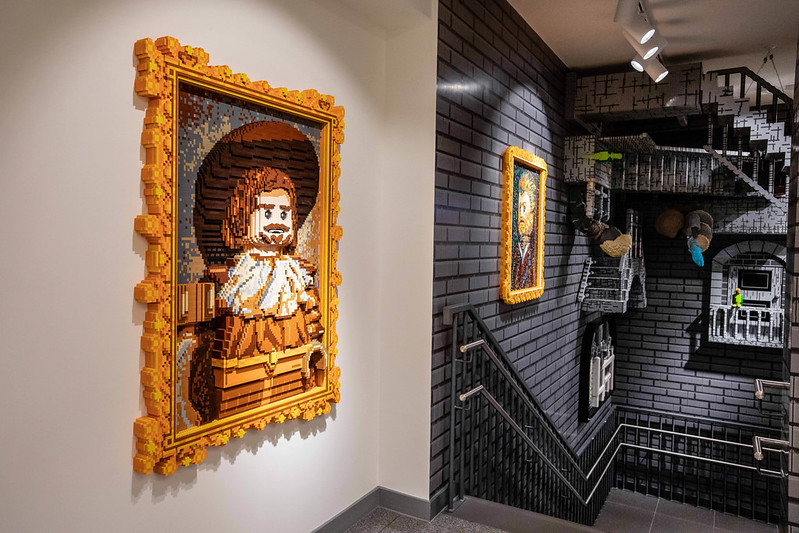 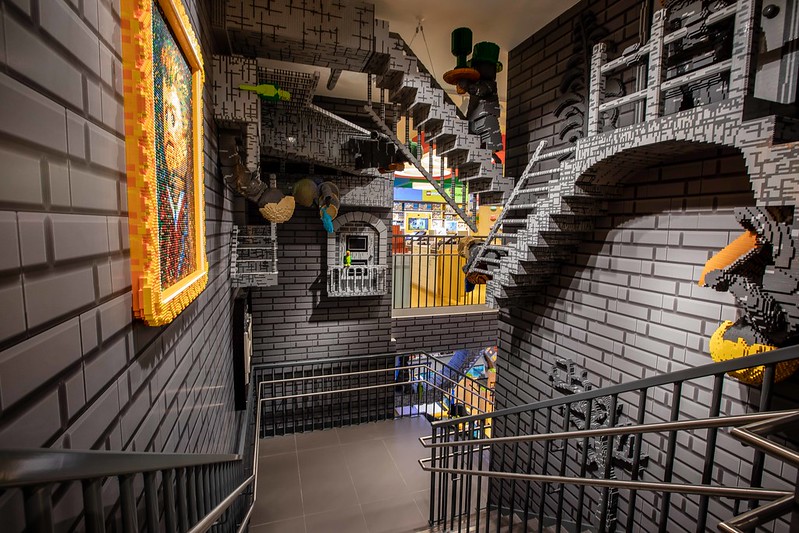 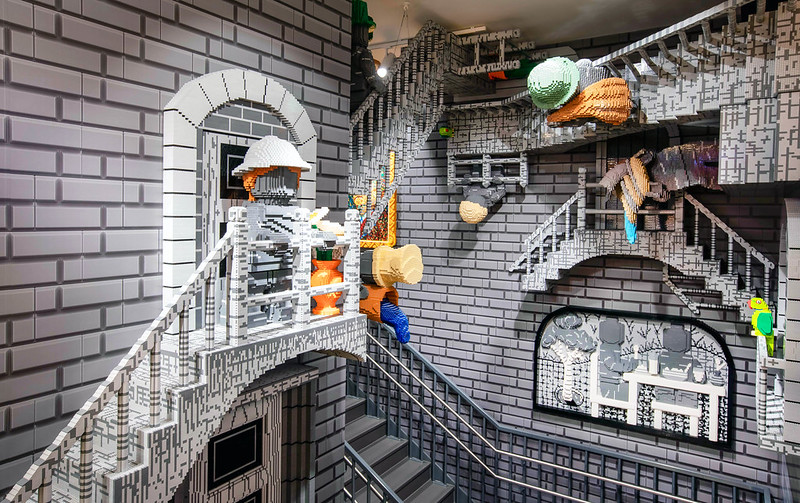 Amsterdam has a pretty big art scene and many of the world’s most renowned artists have been the inspirations for a lot of the features around the store. Works by Grand Master like Jan Vermeer, Vincent van Gogh, and Rembrandt have been recreated with LEGO elements and given a Minifigure twist. A trip in the lift, turns into a mini Art Gallery visit. The stairs to the stores second floor, allow you to step into M. C. Escher’s iconic artwork, with brick-built stairs jutting out from every angle and larger than life Minifigures, taking a trip around them. 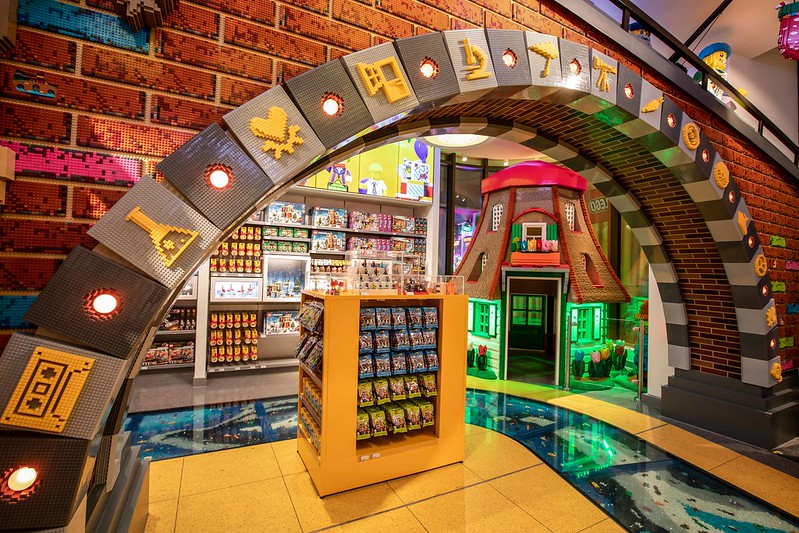 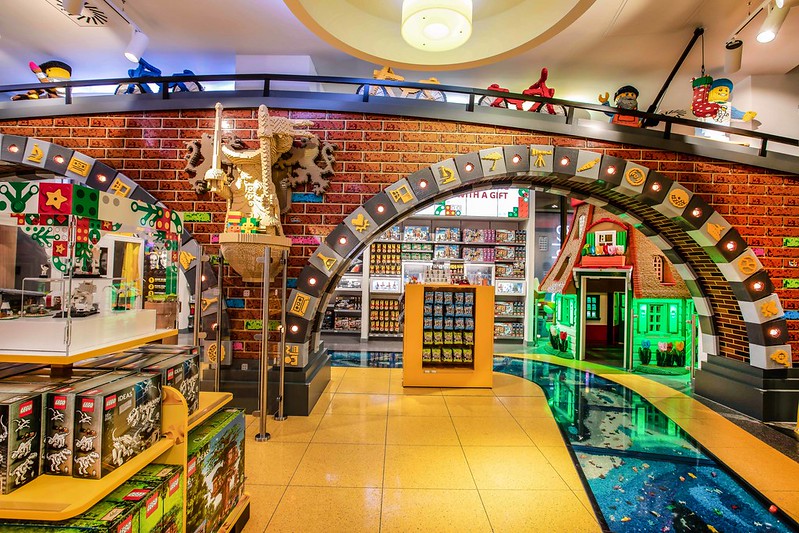 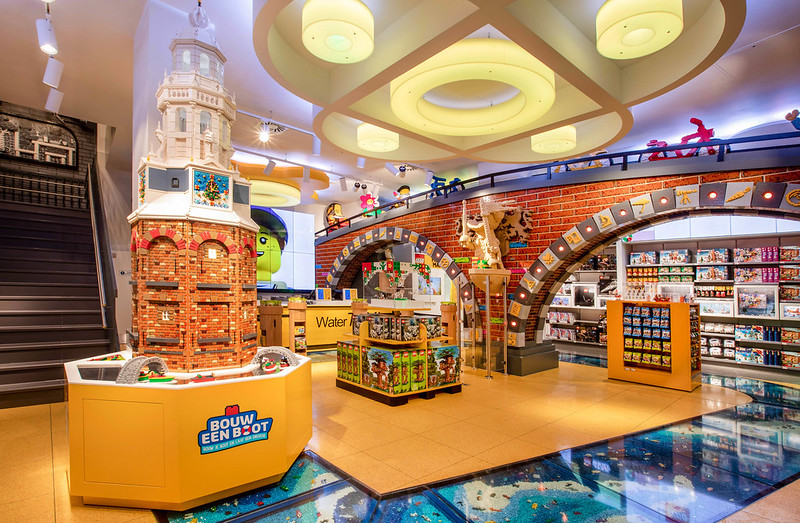 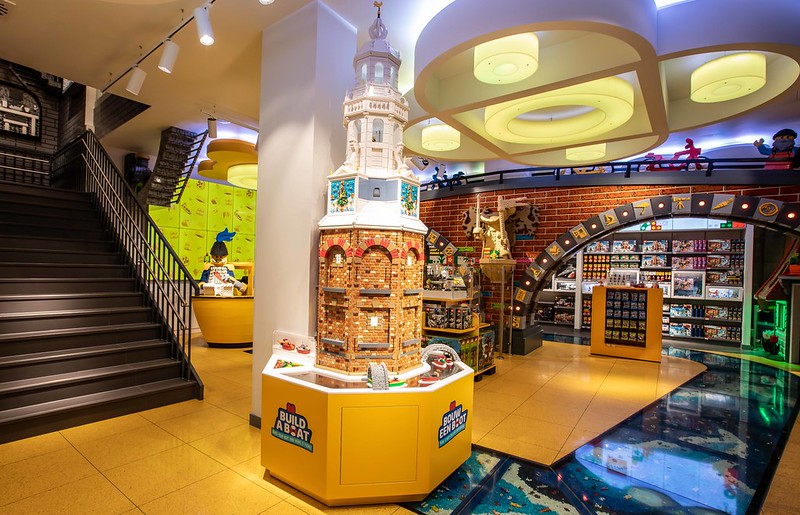 A large bridge, dotted with murals of famous Amsterdam inventions, spans the store and a canal, which is built into the floor of the store. This features a brick-built flow of water and other fun LEGO elements. The canals of Amsterdam have also inspired a unique in-store build opportunity. Here you can build a LEGO boat and see if it will float in the mini canal. 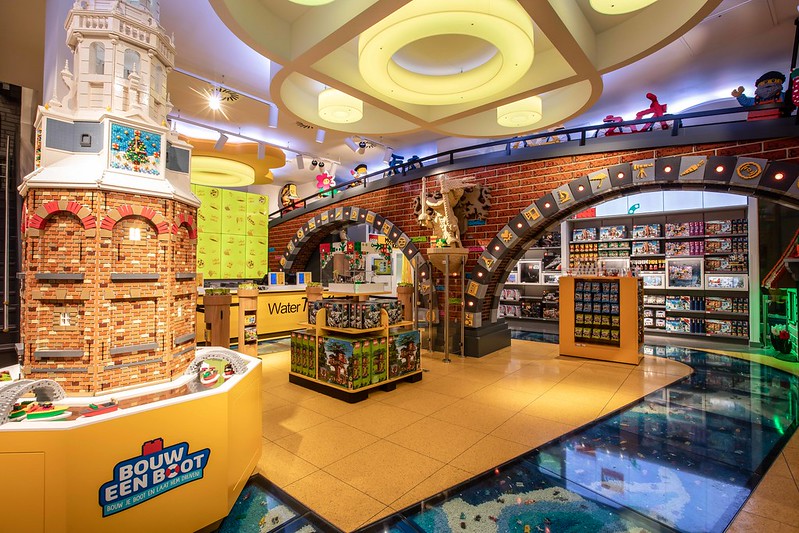 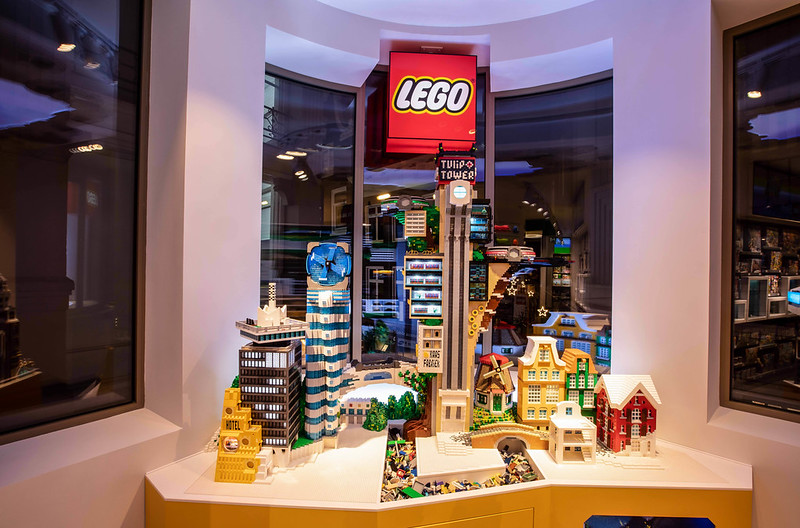 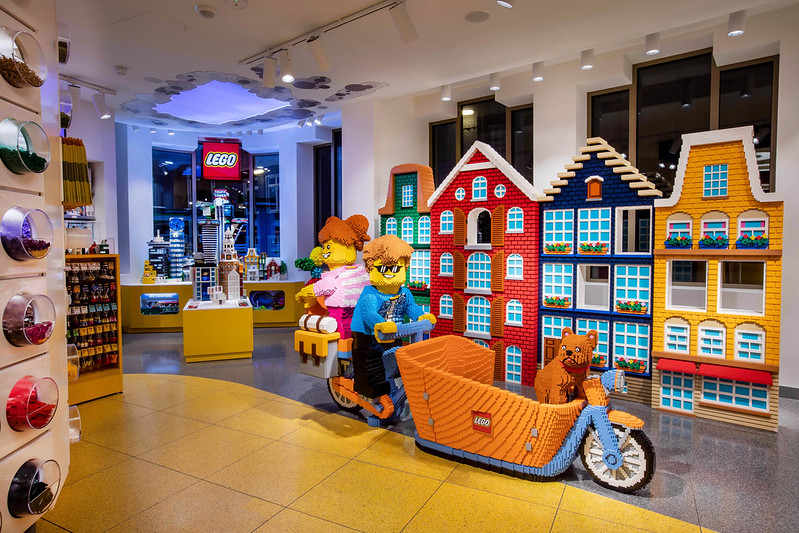 Almost all aspects of the store offer fun photo opportunities, with a huge windmill in one window and a Minifigure scale scene featuring a number of iconic Amsterdam landmarks in another. There’s a full-sized bicycle you can sit in, which is backed by a brick-built Amsterdam street scene. 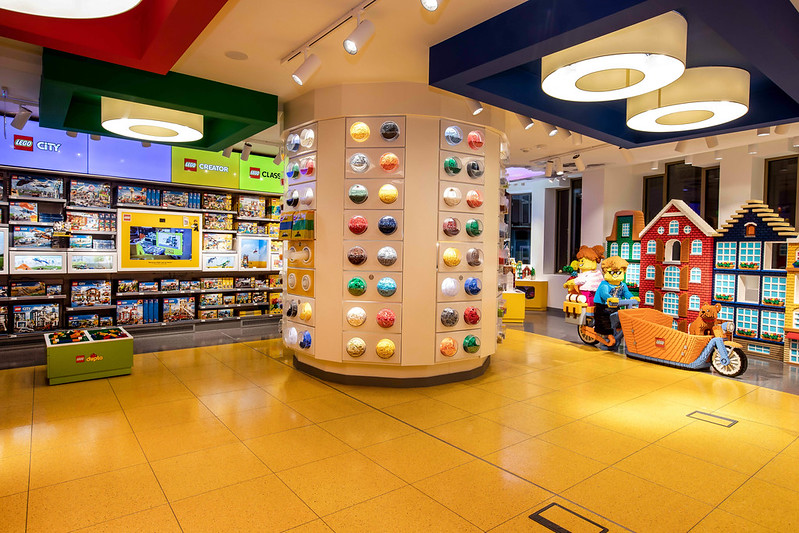 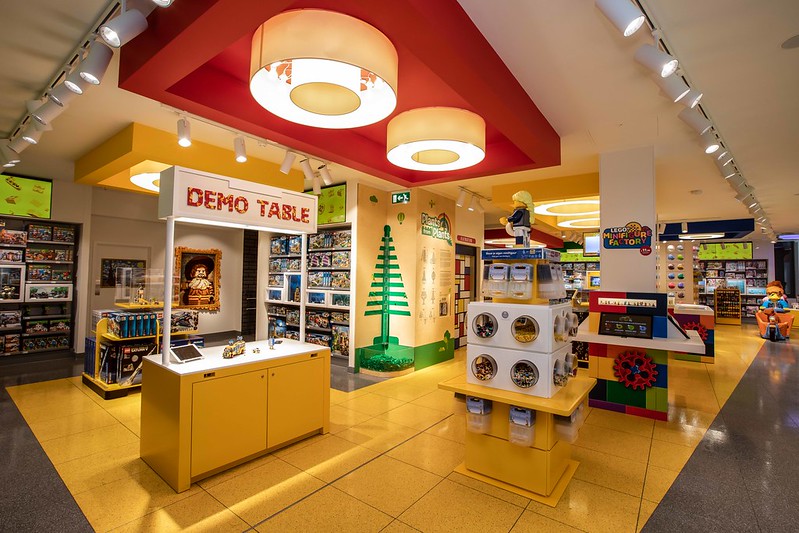 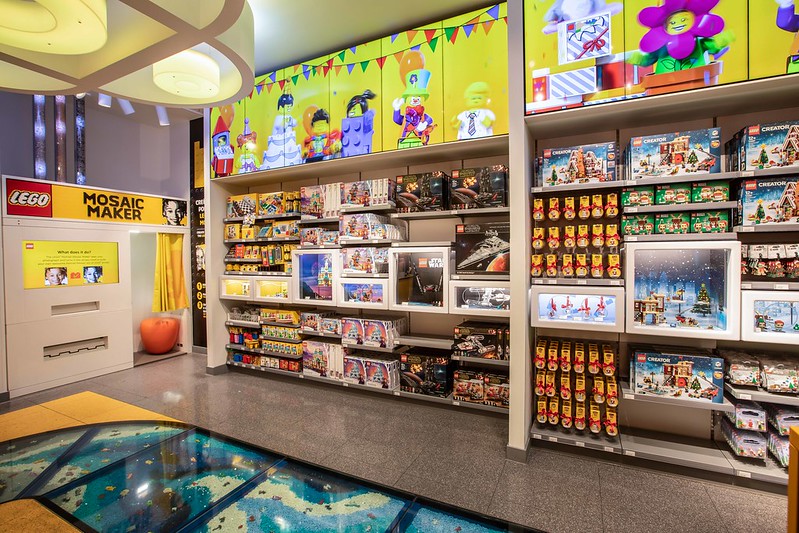 The store makes the most of a number of new in-store technologies, these include the LEGO Mosaic Maker and a permanent LEGO Minifigure Factory, it was as a partial digital ribbon, which first debuted in the new Birmingham store. This adds even more interactive elements to the overall atmosphere of the store. Each LEGO store offers something unique but this latest location is something else entirely. LEGO Netherlands puts it best “The Amsterdam location is a true Valhalla for all LEGO fans” 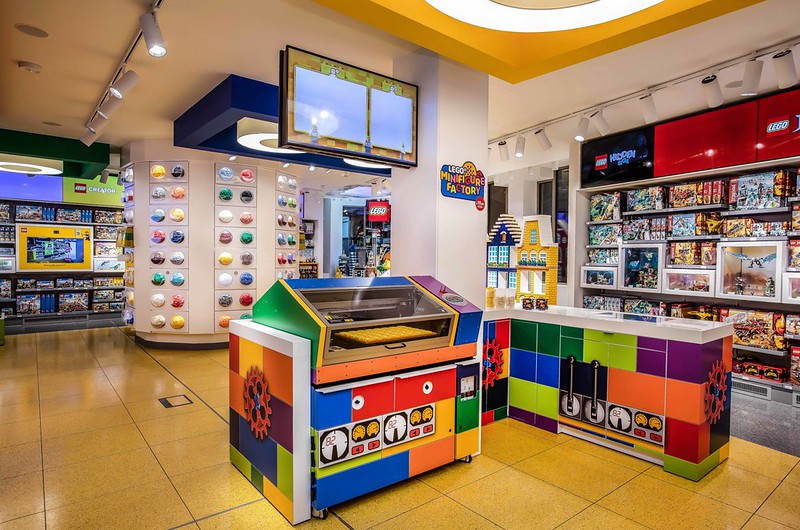 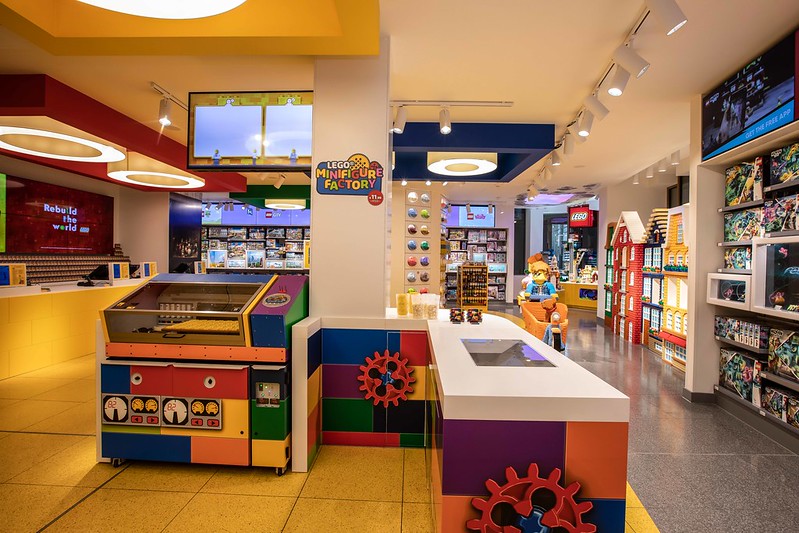 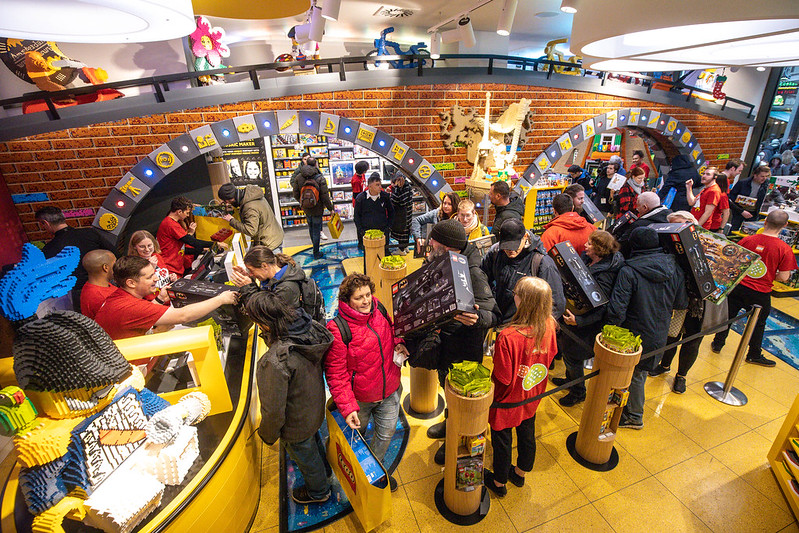 Amsterdam, 29 November 2019 – As of today, Amsterdam is the first Dutch city to have its own LEGO® flagship store, joining several big cities around the world. Hundreds of LEGO fans gathered in and around the Kalverstraat before the doors opened, all wanting to be the first to take a look around the store. The store offers LEGO fans of all ages the opportunity to lose themselves in the world of LEGO play and its many interactive play activities that can only be found in this flagship store.

The store puts the Dutch culture, icons and innovations in the limelight. The entire family is invited to admire the unique LEGO models , play experiences and personalised LEGO items. There are multiple big LEGO models to be found that link to the Netherlands and the city of Amsterdam. Upon entering the store, you will see the famous Amsterdam Mint Tower, an iconic Dutch windmill and a canal bridge decorated with Dutch innovations, such as the cassette, the artificial heart and the microscope. Naturally, the highlights of Dutch art history are part of the store, too. You will encounter a LEGO Escher staircase and will find LEGO versions of masterpiece paintings by the Dutch Masters lining the walls.

Spread around the store are a number of interactive LEGO models where you can let your creativity run wild. Building your own unique boat in the Build a Boat corner, after which you can let it float on the LEGO canals of Amsterdam around the LEGO Mint Tower is just an example.

Claus Flyger Pejstrup, Executive Vice President, LEGO Retail: “It’s is a very proud moment to open our first flagship store in the Netherlands and to bring fun and creative LEGO play to even more Dutch children. In our LEGO stores we aim to inspire and develop the builders of tomorrow through creative LEGO play experiences by delivering the ultimate LEGO shopping experience, where people of all ages can enjoy hours of fun and creativity.”

Not just the LEGO constructions and activities are unique. The store experience offers a true spectacle thanks to its digital innovations, such as the dynamic lighting. This feature allows the store to use different light effects to mimic the typical Dutch weather.

Some of the store’s key highlights include: