Last year the LEGO® Harry Potter range expanded beyond the usual playset scenes to offer its first displayable build in the form of Hedwig. This unique kinetic construct must have been popular as it’s been followed up by another creature from the wizarding world of Harry Potter. Professor Dumbledore’s Phoenix companion, Fawkes, provides another unique Harry Potter set. But how does it shape up compared to Hedwig? Here’s my review of the awkwardly named Fawkes, Dumbledore’s Phoenix set. 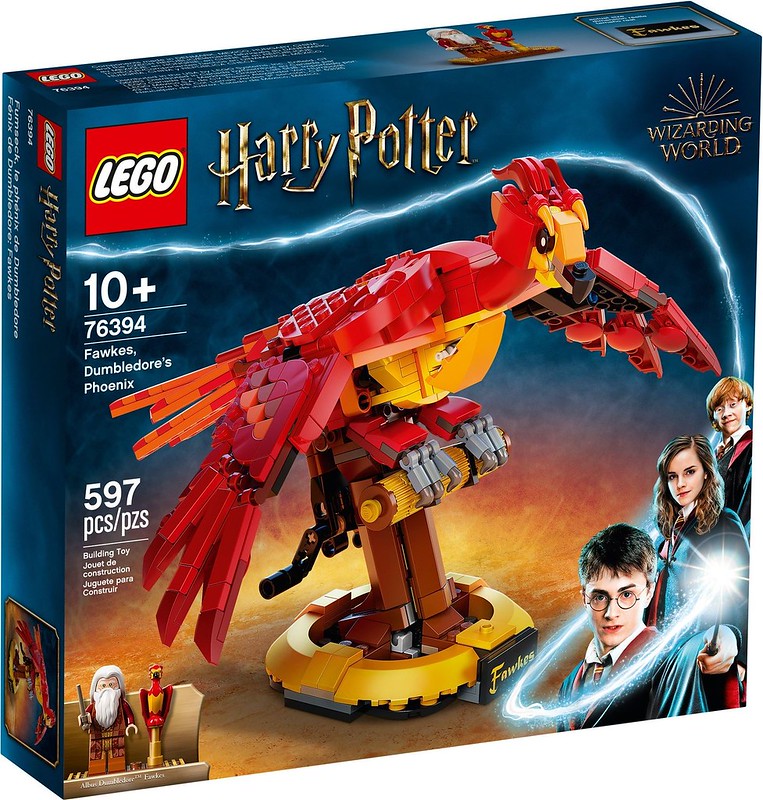 LEGO® Harry Potter™ Fawkes, Dumbledore’s Phoenix (76394) is a realistic model of the iconic phoenix from the Harry Potter movies that kids can display – and ‘fly’ – for all their friends to admire.

Buildable Fawkes the phoenix with ‘flying’ wings
This 597-piece, brick-built model recreates the fiery feathers, powerful beak and graceful flight of Fawkes the phoenix. The model is not only rewarding to build and impressive to display – it also features realistically jointed wings that move. Kids simply turn the handle at the rear to make the articulated wings flap gracefully up and down, displaying Fawkes’ full wingspan of over 14 in. (35 cm). The collectible model stands on a sturdy base and is accompanied by an Albus Dumbledore™ LEGO minifigure alongside a smaller Fawkes figure. 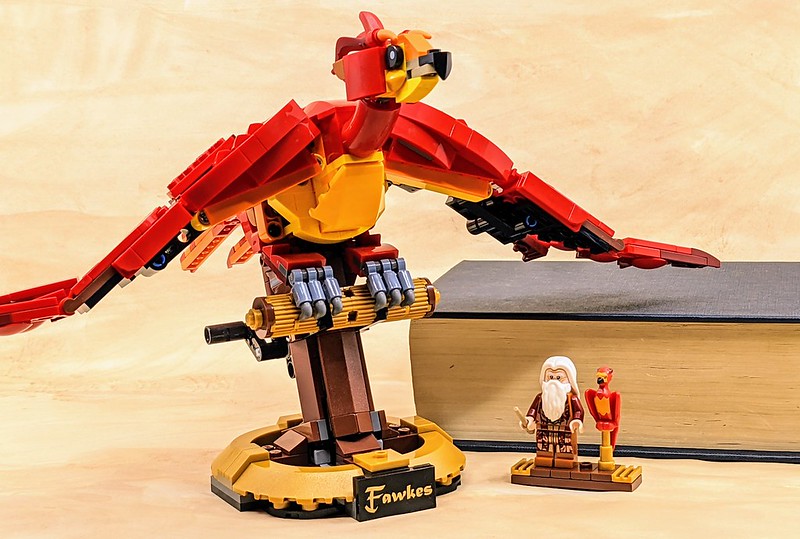 I may not dabble in the Wizarding World of Harry Potter as much as I do with Star Wars or Marvel, but there are a few sets that spark my interest, especially a set like this. Although there are numerous moments, characters and locations from the Potter films and books, which have become fun LEGO playsets. I really enjoy LEGO builds that offer something unique, which is why I liked the Hedwig set so much. So another kinetic model in a similar vein was a must-have. 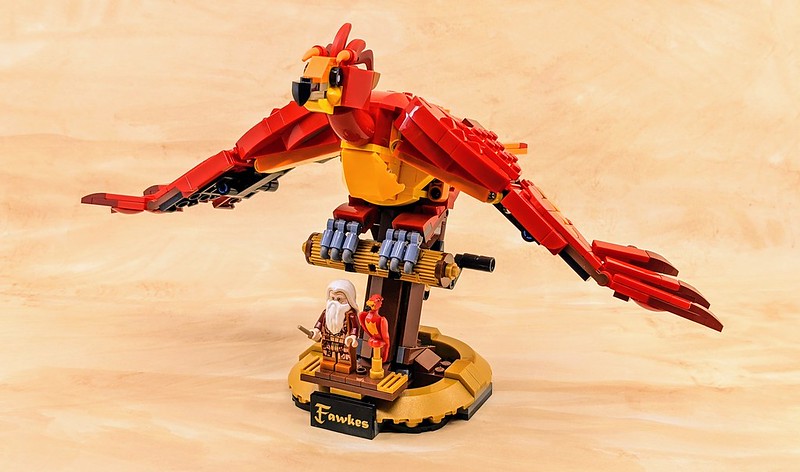 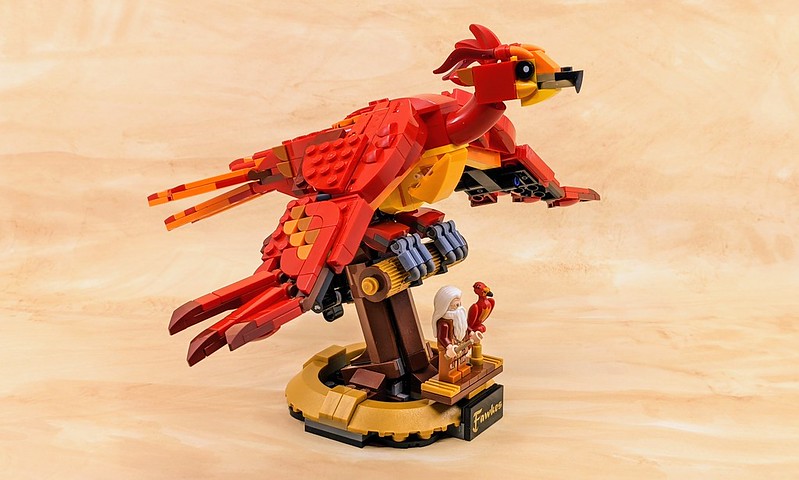 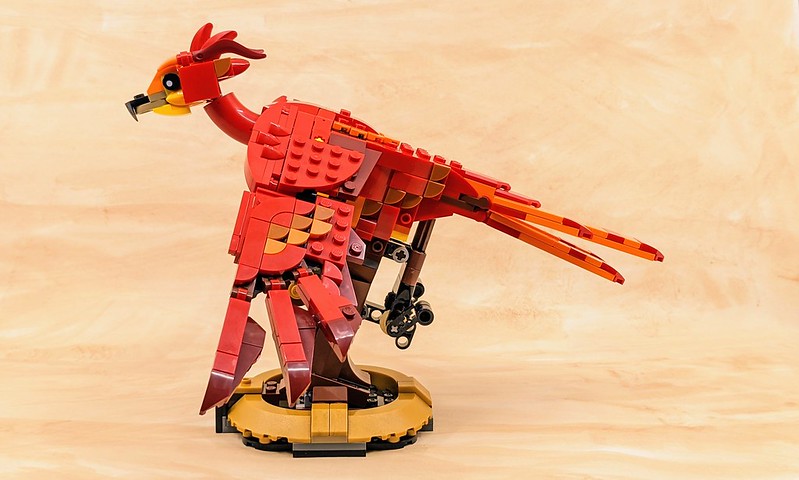 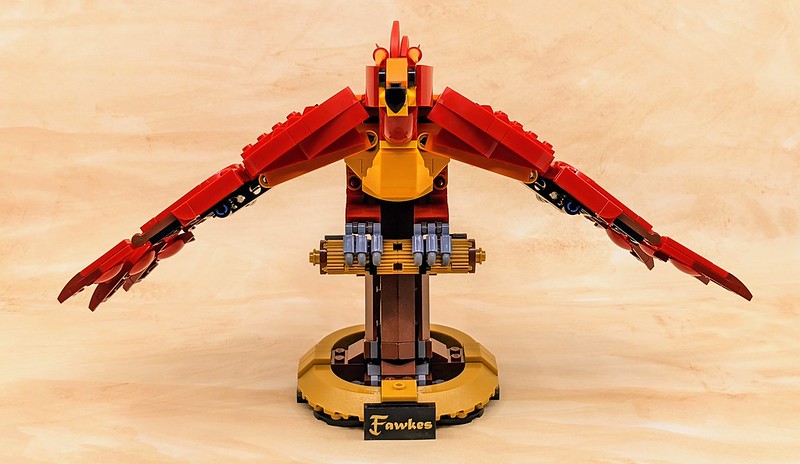 A simple mechanism allows Fawkes to flap his wings, powered by a handle on the display column. Turning the handles makes both wings kick into life and it’s not just a simple up and down movement either. The wings are jointed at both the body and in the middle of them. which gives the movement a satisfying sweeping motion. The section, on which Fawkes is connected to the base, is slightly angled. This partly helps to conceal the moving parts but also gives the bird a nice swooping pose. 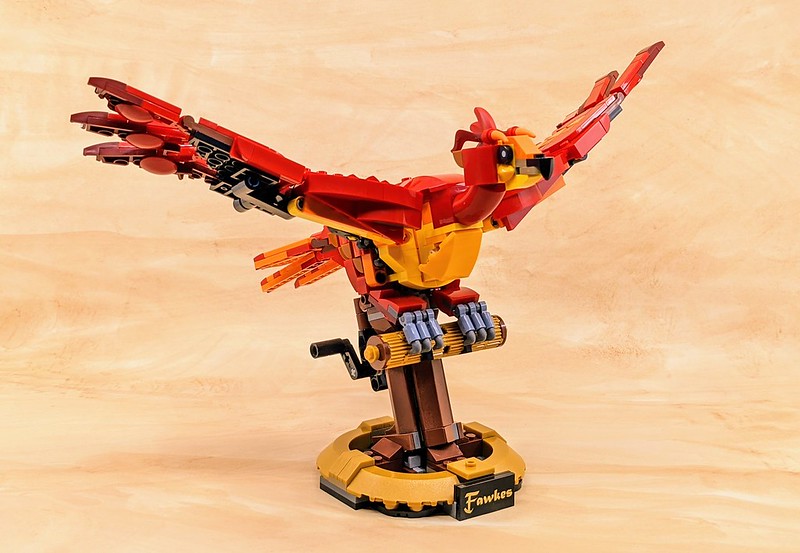 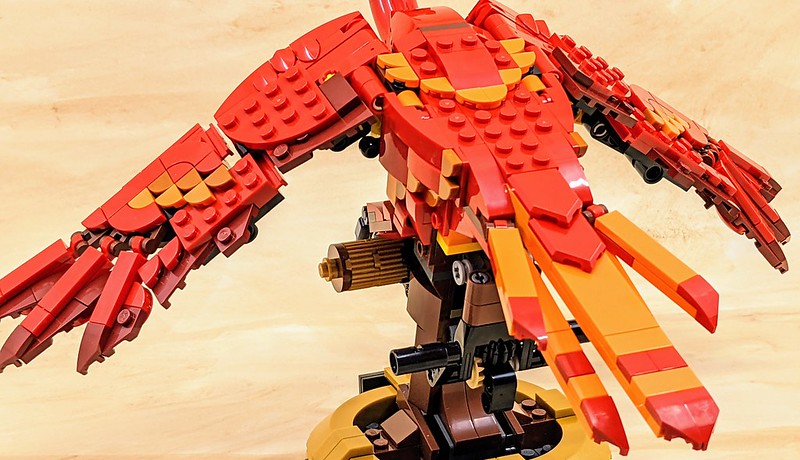 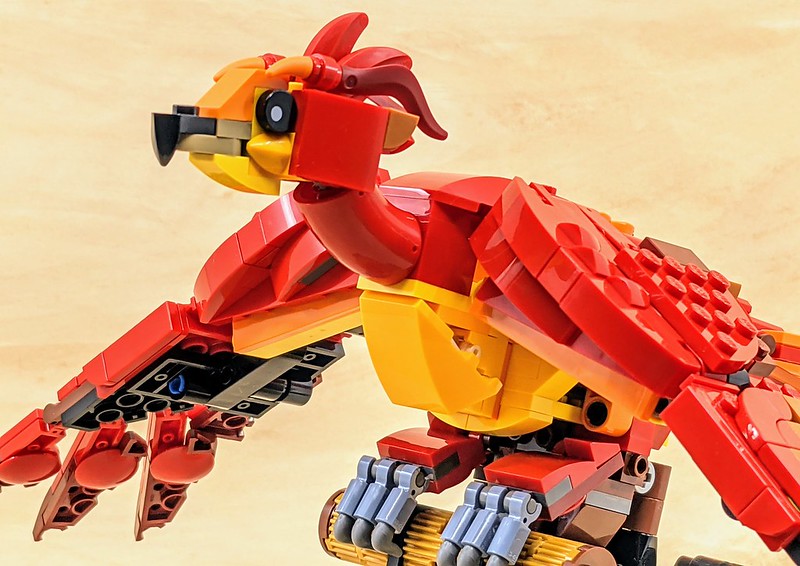 The build is extremely similar to Hedwig, which isn’t too surprising as the configuration of the build and the workings to make it flap are well achieved. But there are enough tweaks to the overall design, including the display base being far more ornate and in keeping with Dumbledore’s office. There is also a vast improvement over Hedwig, the nameplate featured on the front of the set is printed. In the Hedwig set it was a sticker. 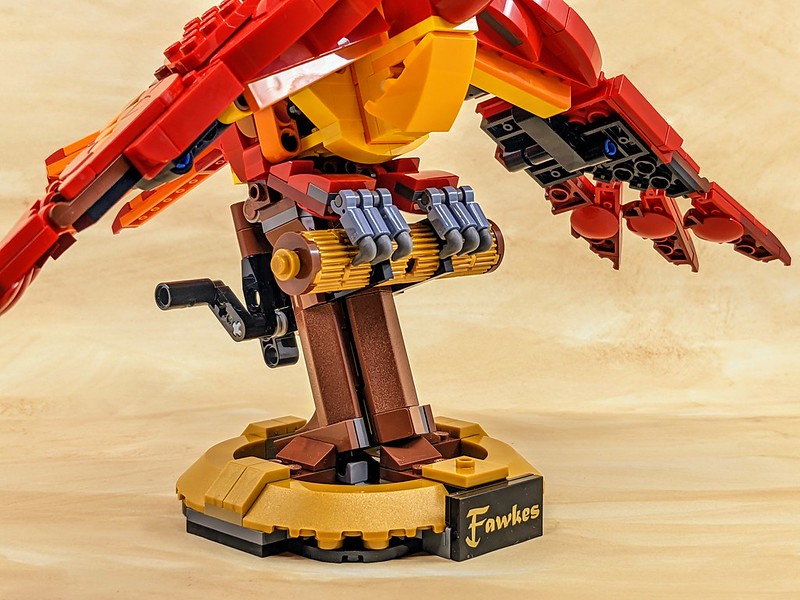 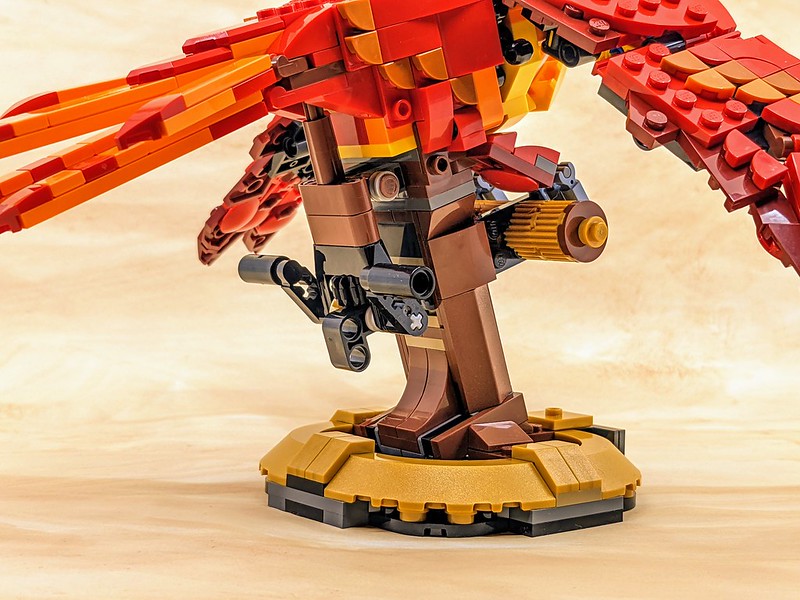 The focus of the set is clearly the mighty Phoenix, but there is a companion Minifigure and animal figure included as well. The version of Dumbledore featured here is exclusive to this set. The colour of his robes neatly matches the fiery plume of Fawkes. He is joined by a Fawkes figure, which has only been included in the second series of Harry Potter Minifigures. These can be displayed on a small stand, which can also connect to the plinth of the set, although not as neatly as with the Hedwig set. 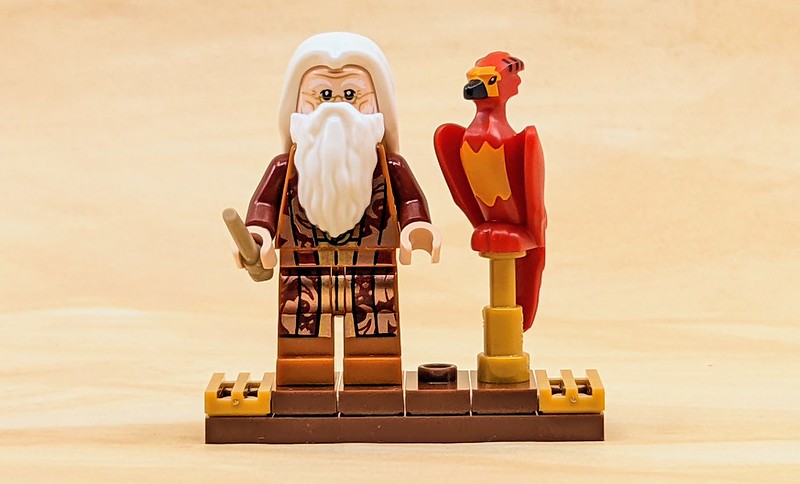 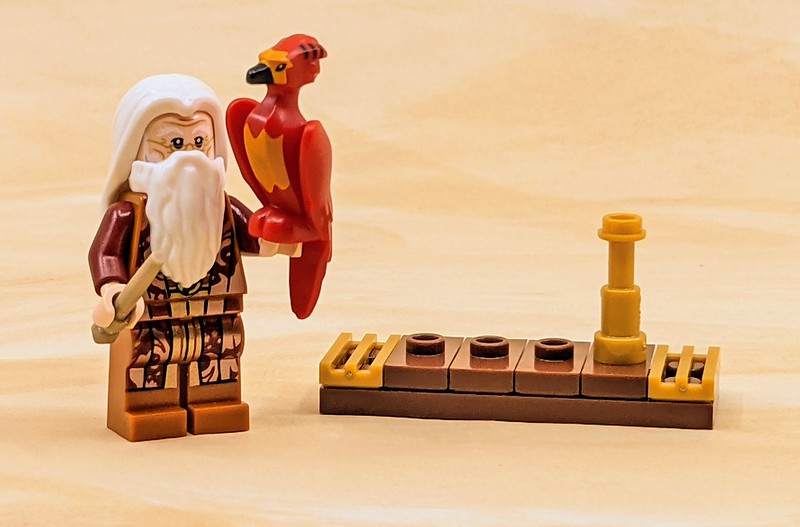 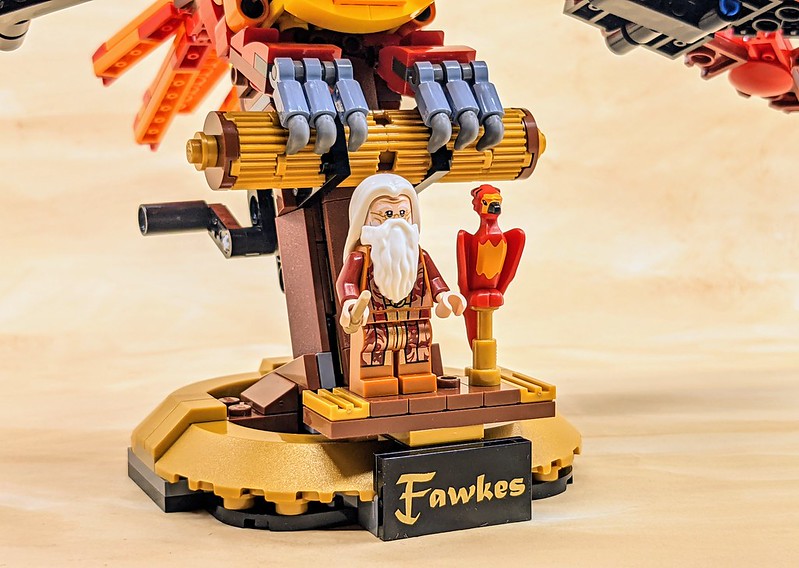 Fawkes is a great companion piece to the previously released Hedwig set. Both offer a unique build and an equally unique displayable piece. Although both sets offer a very similar build, Fawkes is slightly more detailed thanks to the use of different coloured elements. Both sets are available now. 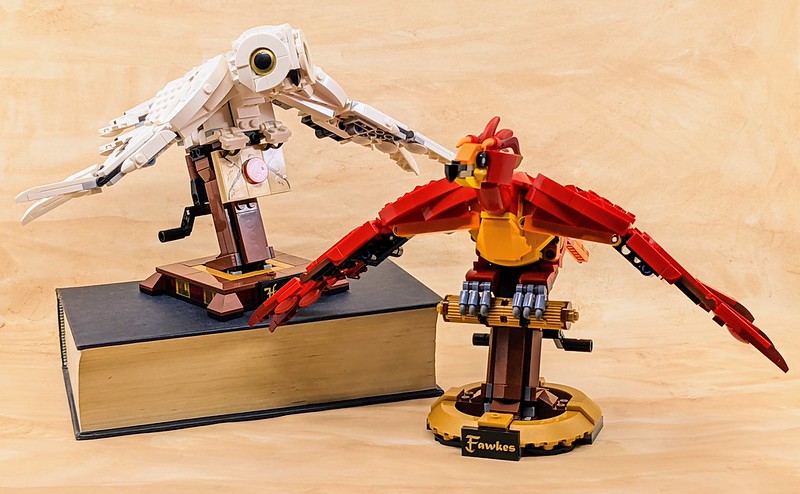 This set was provided to BricksFanz by the LEGO Group for purposes of review. The thoughts within this review are that of BricksFanz and do not reflect those of the LEGO Group. Providing access to this set for free does not guarantee a favourable opinion of the set.