One of the most famous vehicles from the Marvel universe is the Quinjet. It’s featured prominently in the MCU, appearing in the Avengers films and many of the other connected adventures. It’s even appeared in TV spin-offs, animated adventures and is a focal point at Disney Park’s Avengers Campus. So it’s no surprise that the Quinjet has also inspired a few LEGO® sets. The first was released back in 2012 when the Marvel theme made its debut. Since then there have been a few different versions of the ship and every single one has been different. So what does the latest take on the Quinjet have to offer? Here’s a look at The Avengers Quinjet. 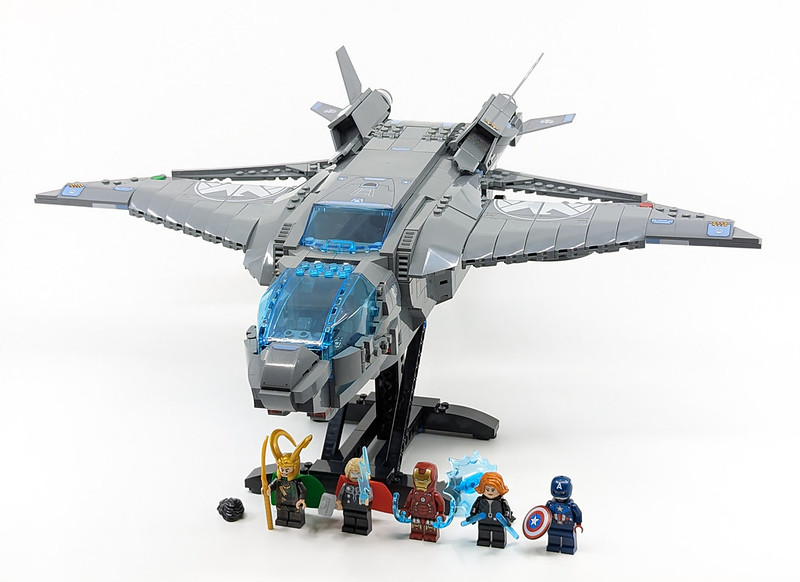 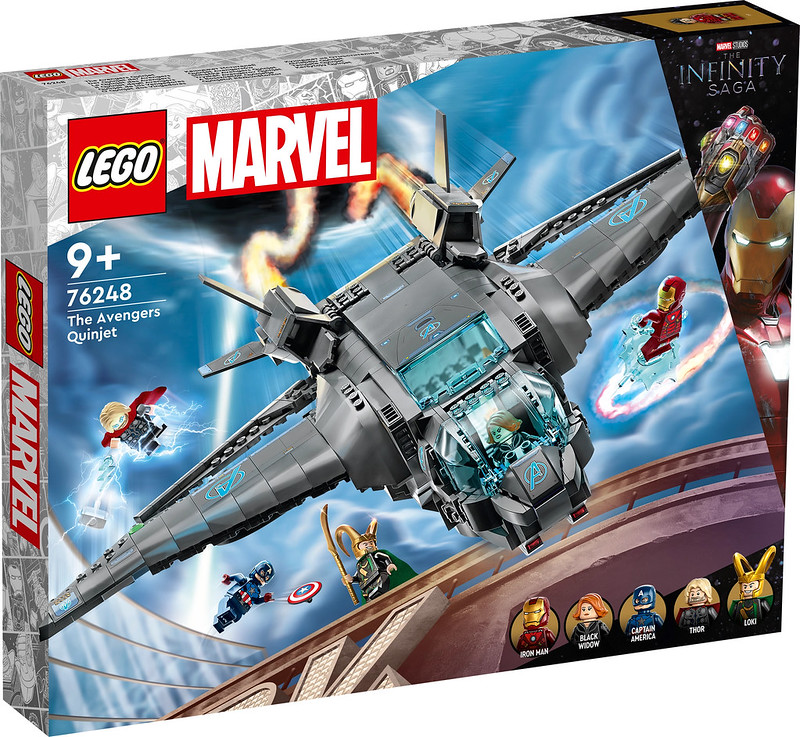 The Quinjet has become an important part of the MCU. It’s been used in many missions and played key roles in iconic moments. It first appeared in the MCU during the Avengers and was used as a sort of flying base of operations for Earth’s Mightiest Heroes. The very first LEGO Quinjet was based on its appearance in Avengers Assemble and this latest edition takes its inspiration from the same film, so it’s a remake of sorts but they are vastly different sets. 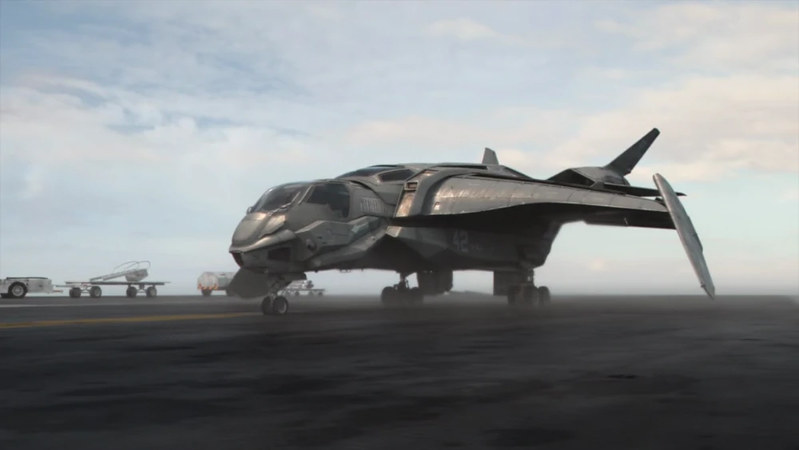 One of the main differences with this updated version of the Quinjet compared to the very first version and those which have followed it are the stickers. The set contains 2 sheets – Sheet A is themed around the Avengers branding. With Sheet B being themed around S.H.I.E.L.D. The difference between the 2 sheets is the use of the Avengers A logo or S.H.I.E.L.D. eagle badge, although many of the stickers are the same. The instructions show the numbers and images for sheet A. For some stupendous reason Sheet B requires the use of the LEGO Builder App. There is absolutely no reason why the sticker numbering for both sheets couldn’t be shown on the in-set instructions. Despite the unnecessary steps to place either set of stickers, I really like the option of choice and I decided to use the S.H.I.E.L.D. stickers.

I’ll start by saying this is the best version of the Quinjet yet and that is mainly due to the cockpit area. The way the windows have been done is great. There’s the usual transparent canopy sitting over the top of the cockpit but there are 2 additional sections added to the sides. This gives it a much better finish than previous versions. The cockpit area has enough room to seat 2 minifigures, with additional seats found in the fuselage of the Quinjet. Obviously, the interior section is very plain. Apart from 6 seats, there’s nothing else going on in there. There are a few accessories located at the very rear of the craft. But these are accessed by dropping down the rear ramp. 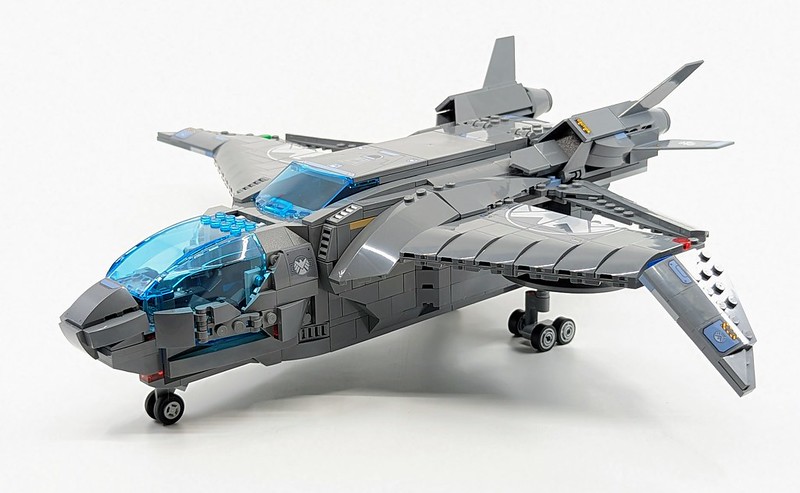 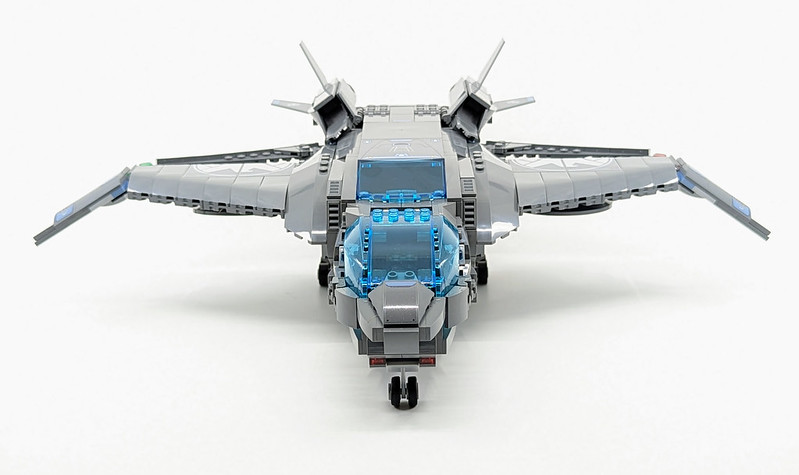 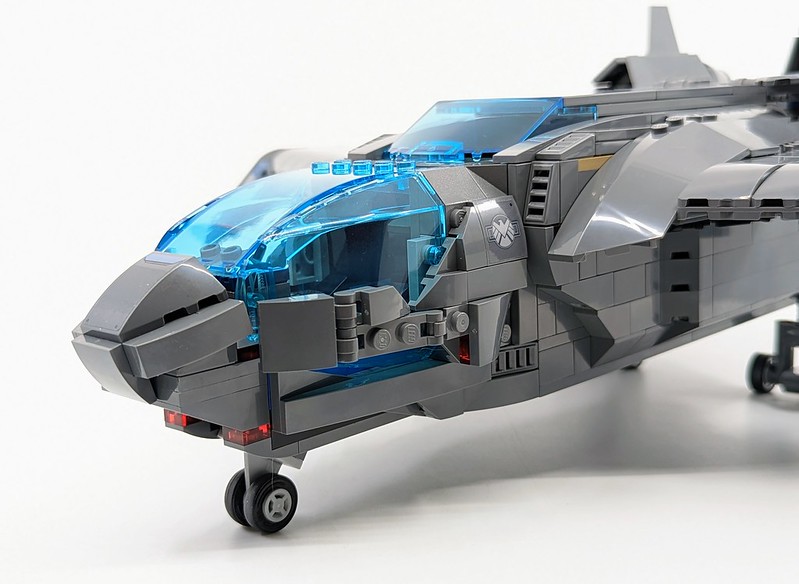 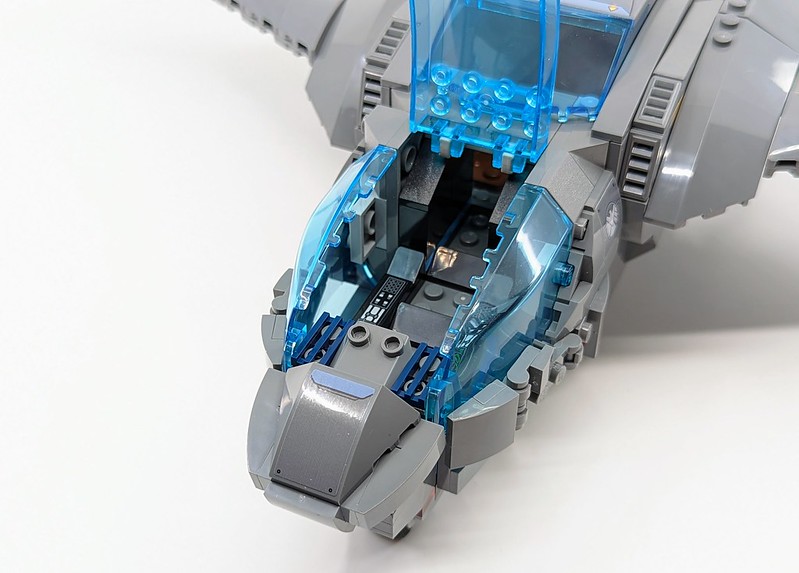 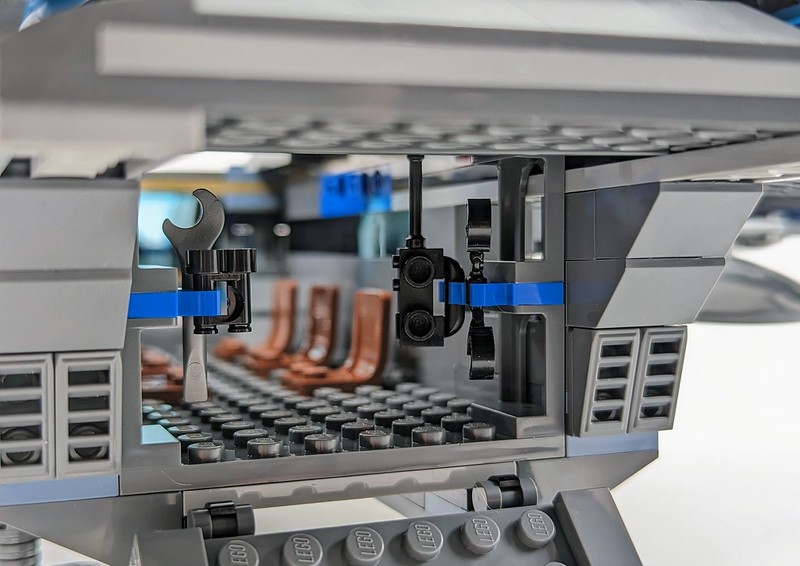 Although the interior is quite plain, the exterior is nicely detailed. There are fold-away wheels at the rear of the ship and one near the front. I would say those at the back of the Quinjet do look great but the gap they sit in when folded away looks a little unfinished. So much so that I thought a brick or two had become dislodged or I’d made a mistake with the build. Another odd fold-away piece is found near the front wheel. I’m assuming it’s meant to be a gun but it looks like a stand. Apart from those little bits, I love the rest of the exterior. It’s nicely layered with plates to give it texture and uses stickers well to add extra detail. The gaps in the wings seem a little odd but match the appearance of the Quinjet from the films. 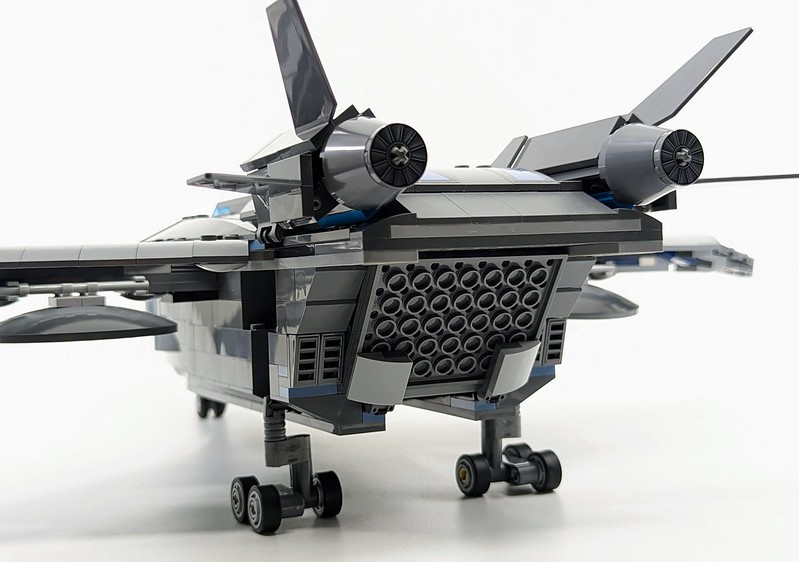 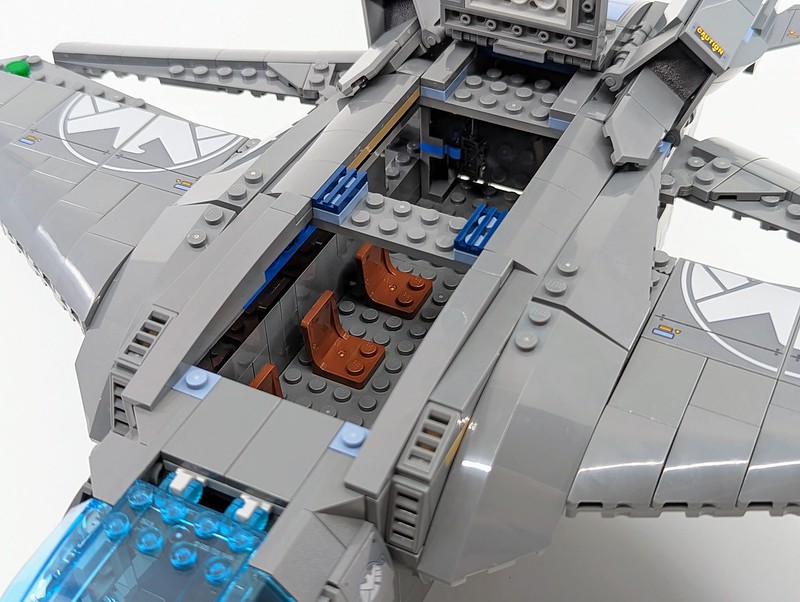 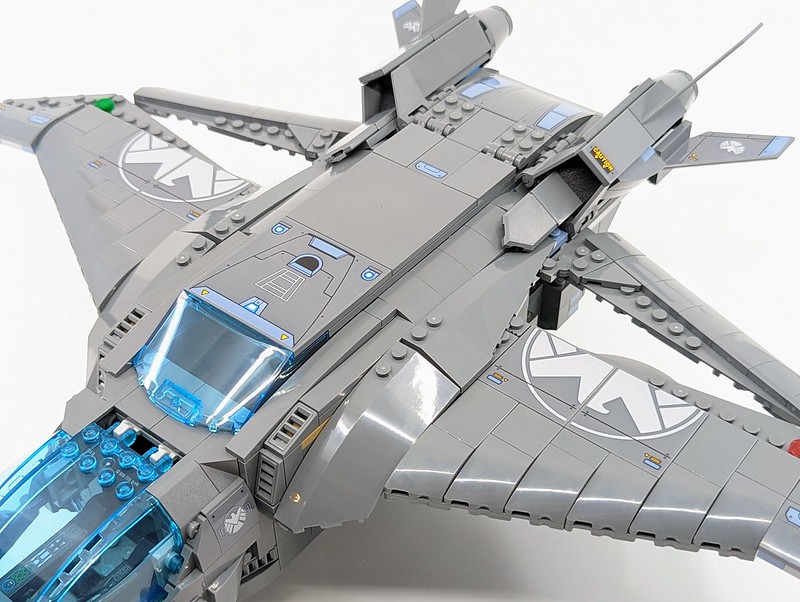 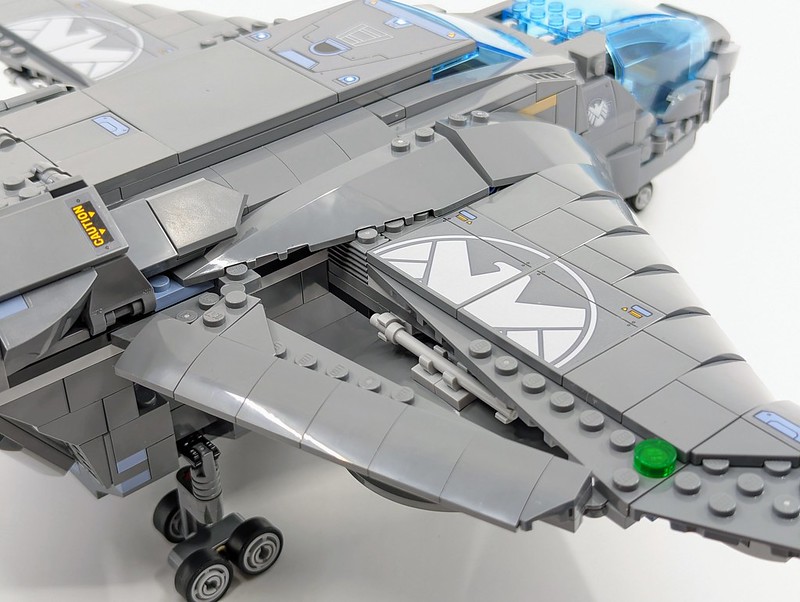 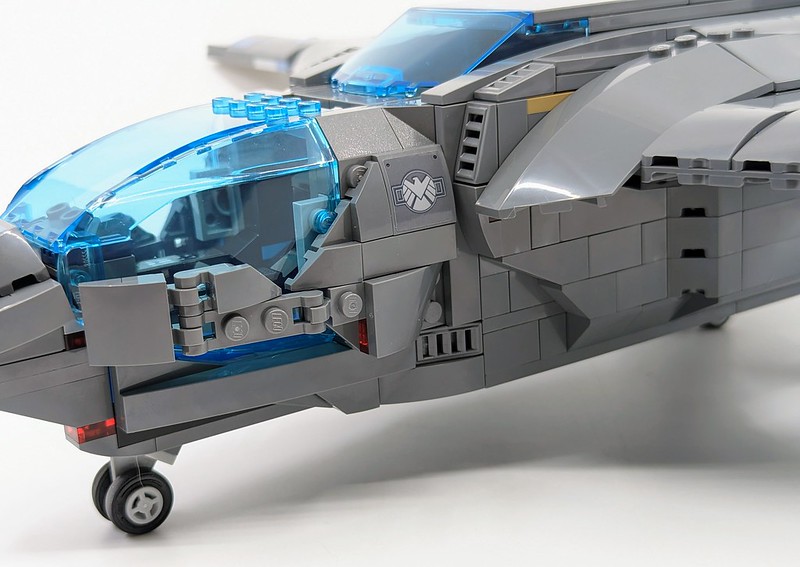 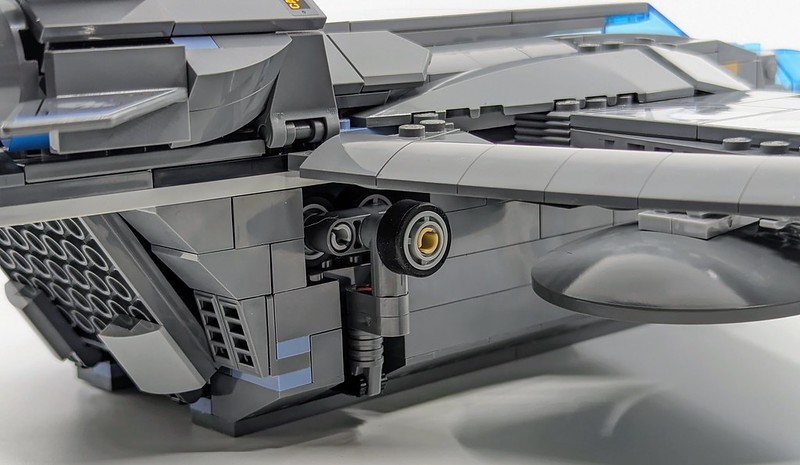 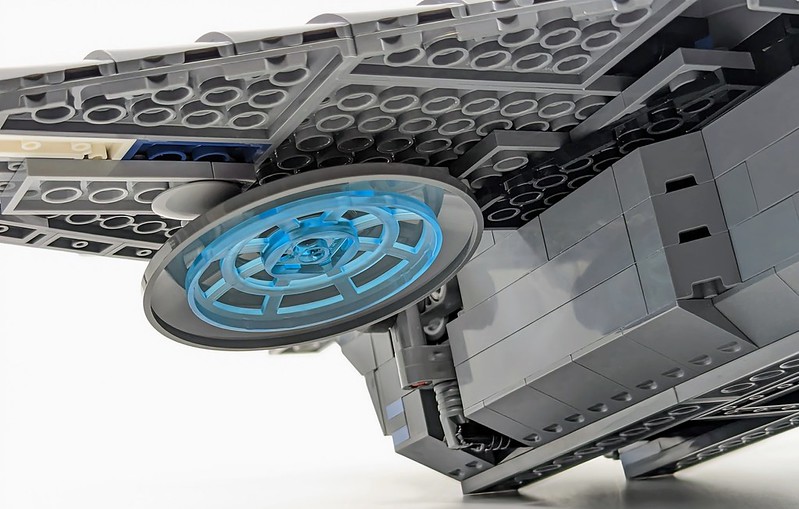 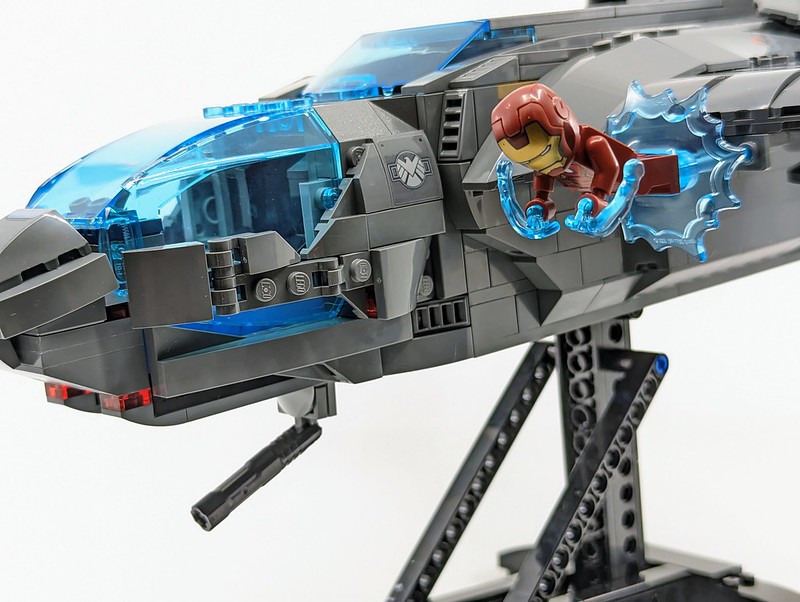 One difference with this set compared to other versions is the inclusion of a buildable display stand. This is very similar to those included in other sets such as the recent Guardians ship or the various Star Wars UCS sets. Although it’s not been created as a displayable set. This gives you that option and it’s a nice option to have. The ship simply sits on top of the stand so can be easily removed and it sits at an angle as well so looks quite cool. 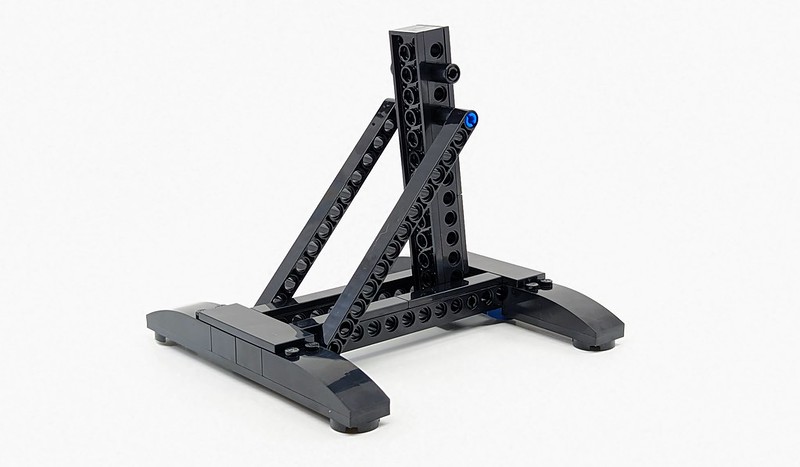 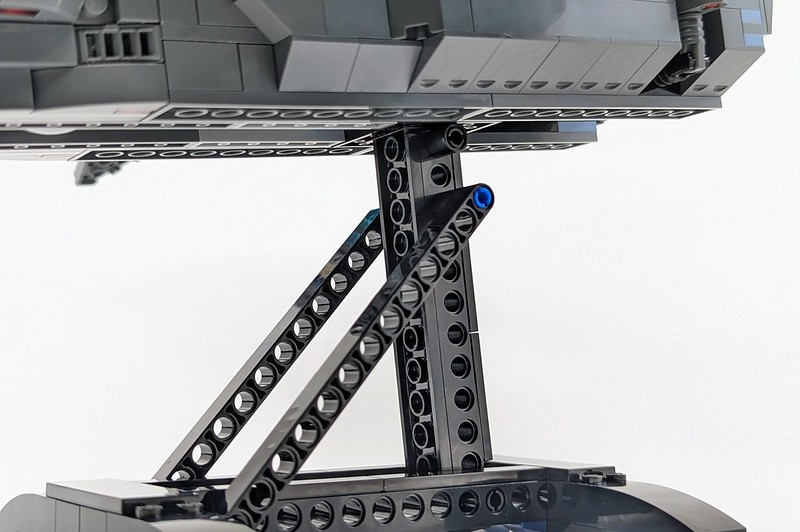 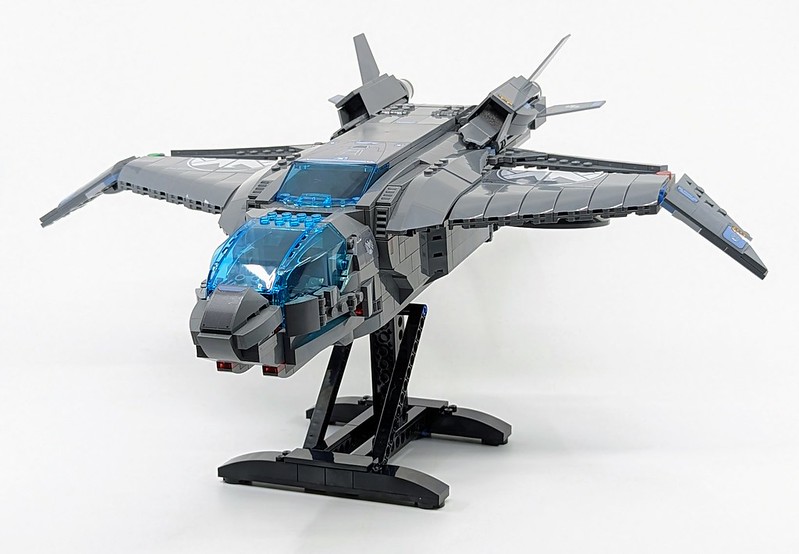 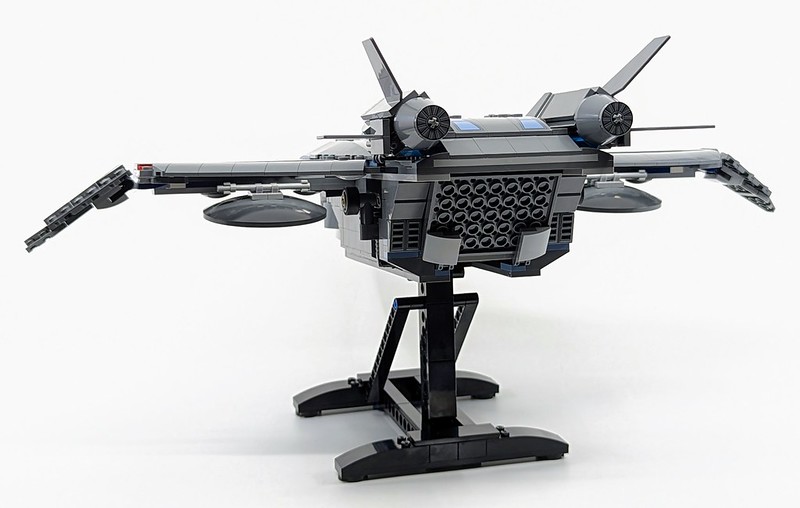 Like the original, this set includes 5 characters, which the Chitauri soldier dropped in favour of Captain America. Joining Cap is Thor, Black Widow, Iron Man and Loki. All of the characters are nicely detailed with Black Widow featuring print detail on her arms and Loki’s alternate face featuring him wearing his Asgardian gag. Although Cap, Thor and Black Widow lack print detail on their legs, they do have very detailed torsos. Iron Man uses the updated helmet element, which is much better than the enclosed one used for a few years. Both Tony Stark and Loki can have their helmets replaced with a hairpiece. This is particularly cool with Loki and his mouth-covered face. 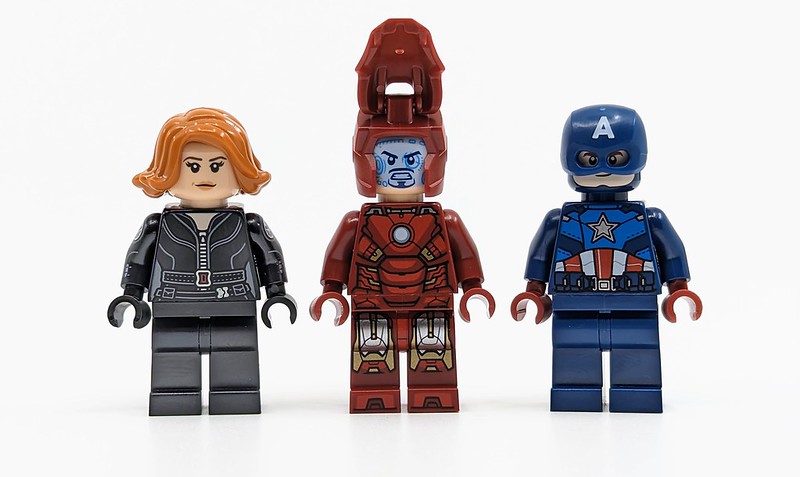 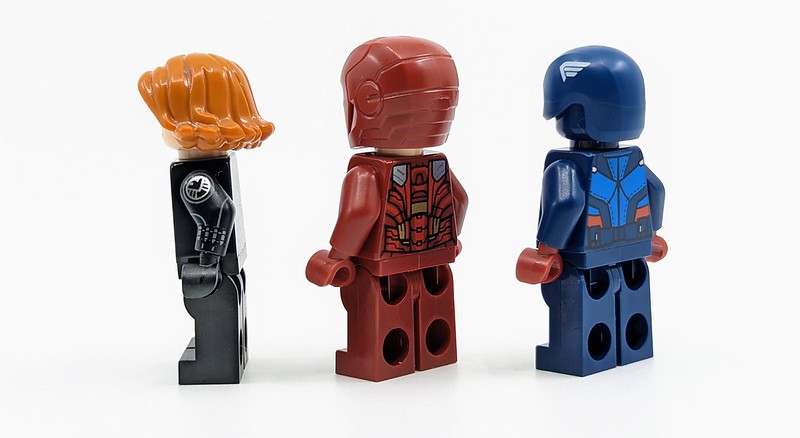 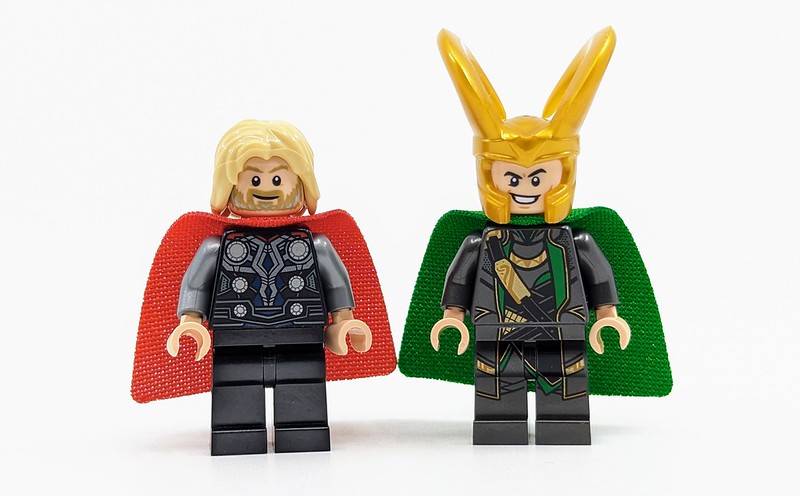 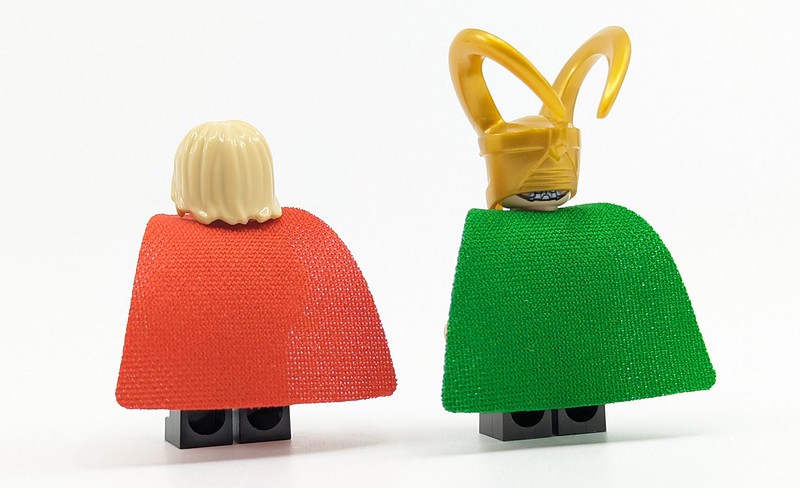 All 5 characters featured their expected accessories with Iron Man including 2 power blast bolts and a power blast disc that can be connected to the wing of the Quinjet. Loki has his staff and Captain America includes his shield. Thor has his hammer but oddly also includes a lightning bolt, I get he’s the God of Thunder. But the worst of the accessories goes to Black Widow. Her electro rods have been featured before and they normally use transparent rods. But the ones in this set are far too long and look very silly. 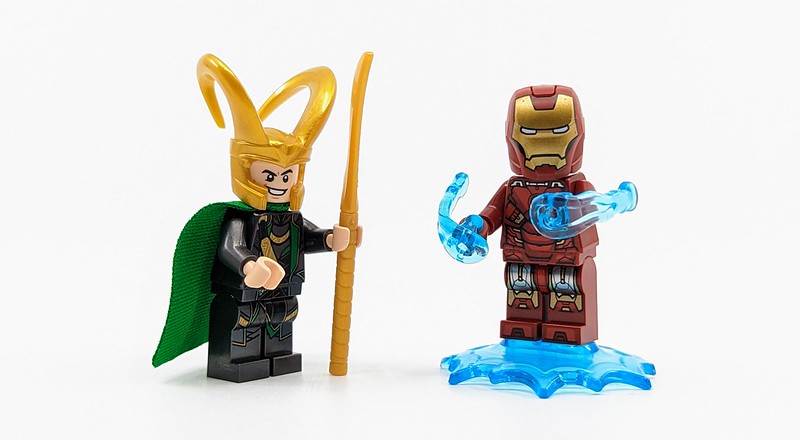 This is the 6th version of a Quinjet and it’s definitely the best one so far. Its overall appearance manages to capture the unique design of the Quinjet. Although it’s a playset, I quite like that it hasn’t had random play features tacked on for the sake of it. It may not be as detailed as a set purposely created to display but the inclusion of the stand and overall design of the set makes it a worthy stopgap before that enviable large-scale set is released at some point in the future. The minifigure line-up is also great, it’s nice to get better-detailed versions of the original Avengers as well as the added details they also feature.