Random monsters have become a bit of a tradition in the LEGO® Marvel sets. One which will continue in the smaller of the two sets inspired by Thor Love & Thunder. Joining the Goat Boat set is Attack on New Asgard. A set that features a random creature seemingly dubbed the Shadow Monster. According to the product description, it has been summoned by Gorr the God Butcher. The Symbiote-inspired god botherer is set to be the big bad of the fourth Thor movie, although he’s not featured in the recently released trailer. So it’s difficult to conclude how the set compares to the movie or even if the creature has made it into the final cut. But we can take a closer look at the set ahead of its release on April 26th. 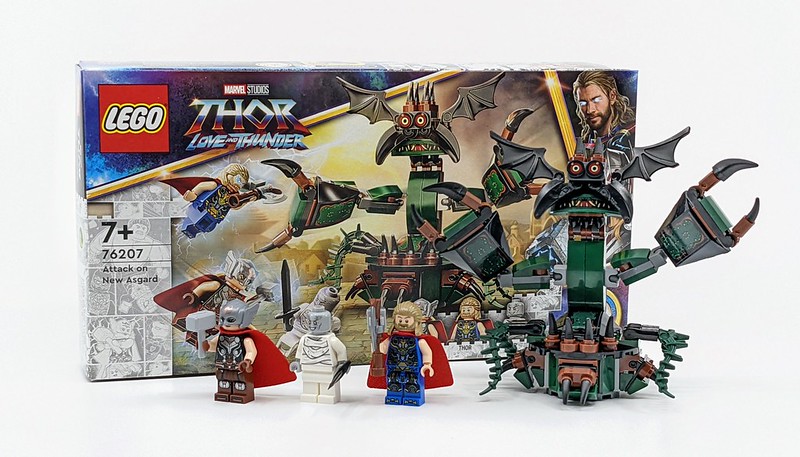 Give Super Heroes aged 7 and up a monster treat with LEGO® Marvel Attack on New Asgard (76207). This stand-out action playset from the Marvel Studios’ Thor: Love and Thunder movie pitches the heroes against a creature built out of kids’ imaginations. 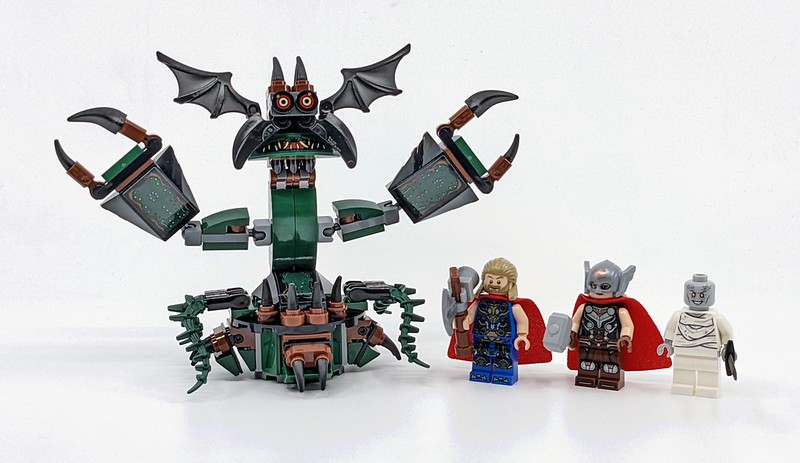 This is a rather small set and so only features 2 numbered bags. There’s also a small sheet of stickers that adds a little detail to the body of the Shadow Monster. 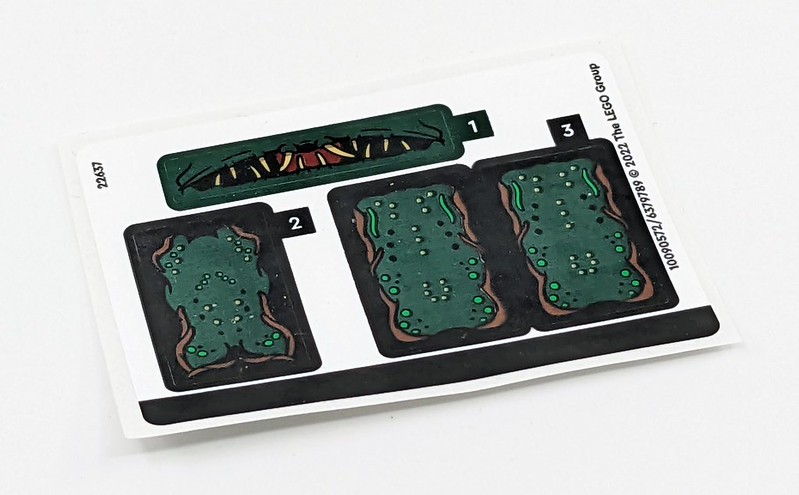 It’s that Shadow Monster that makes up the entirety of the set. It’s difficult to decipher exactly what it’s meant to be as it’s a mix of features including crab-like claws, winged fins and plenty of horns. The bottom half of the creature has some interesting detail. I quite like how the hinged plates sit against 1×2 slopes as it gives a nice shape to the base, especially when combined with the various horned spikes and vine-like tentacles. 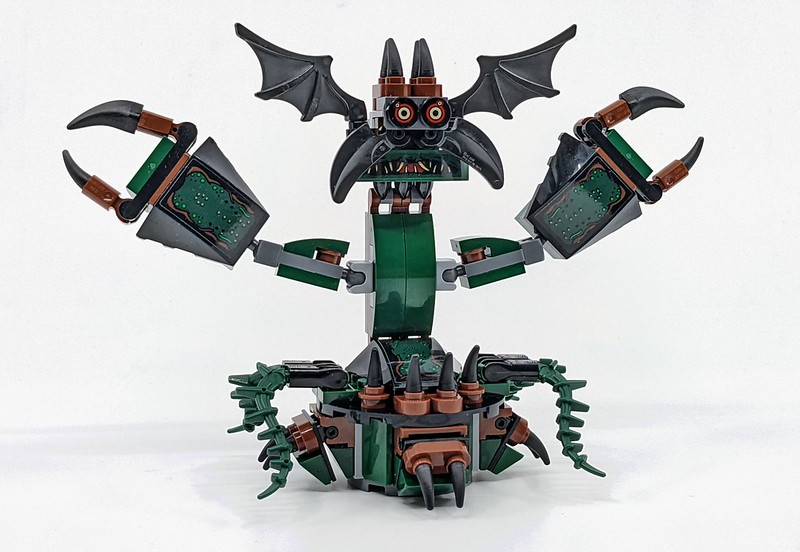 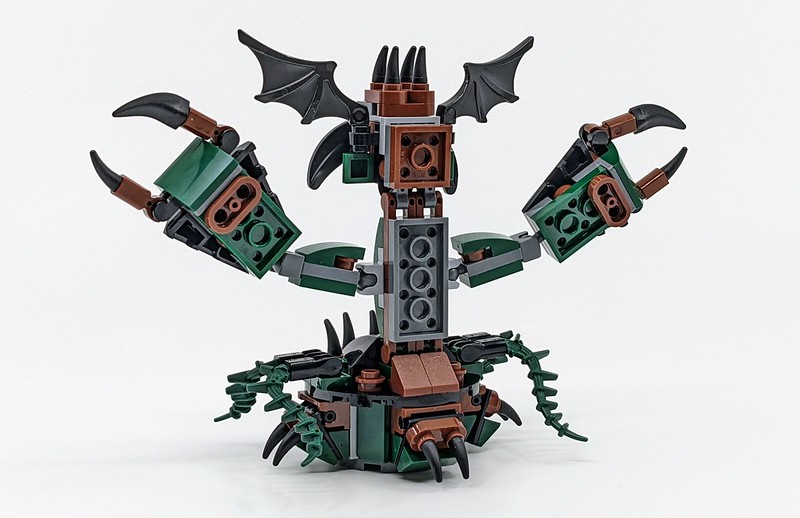 The head of the creature is fairly monstrous-looking, with a couple of printed 1×1 round tiles featuring red and yellow-tinged eyes. These are framed with a pair of wings on the head and two claw-like finds around the mouth area. It certainly fits the description of being a monster, but how it compares to the one that may or may not be featured in Love & Thunder is unknown. I will say it feels like something which would be included in a larger set as a secondary build. 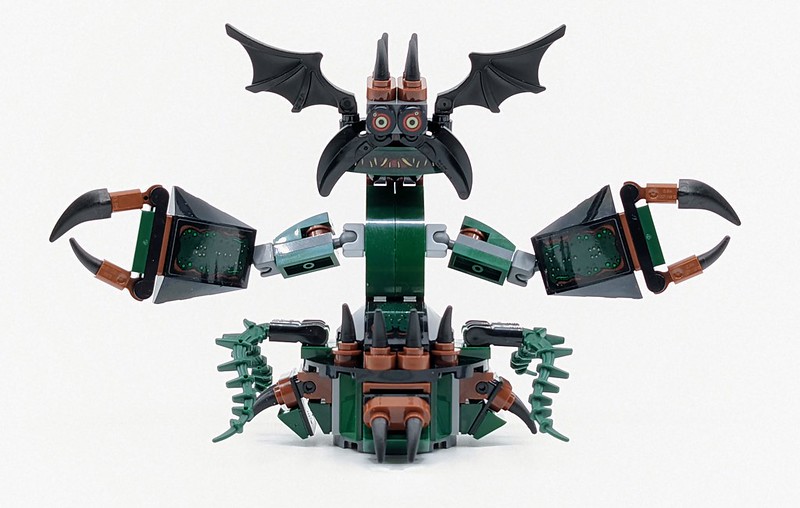 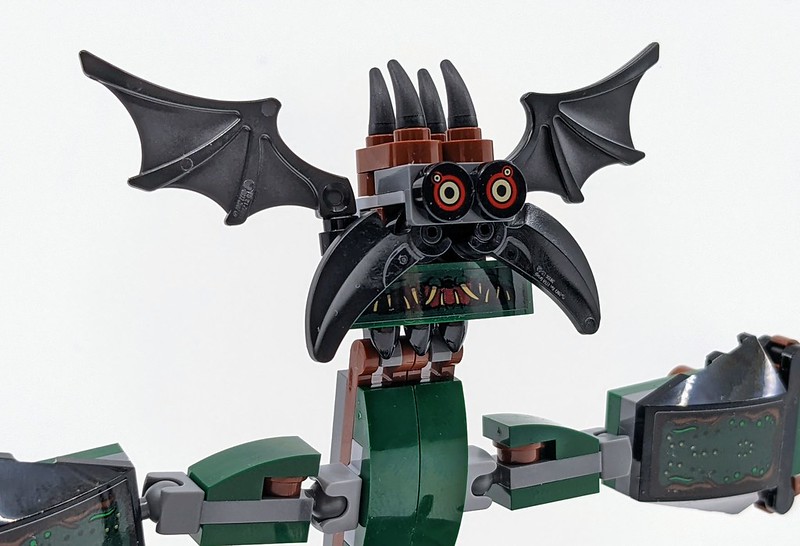 If the Shadow Monster doesn’t float your boat, then the three Minifigures may grab your attention. The set features three characters including Thor, Jane Foster’s Mighty Thor and the new villain Gorr the God Butcher. All three of these Minifigures appear in the larger Goat Boat set. But the price of that set compared to this one is vastly different. 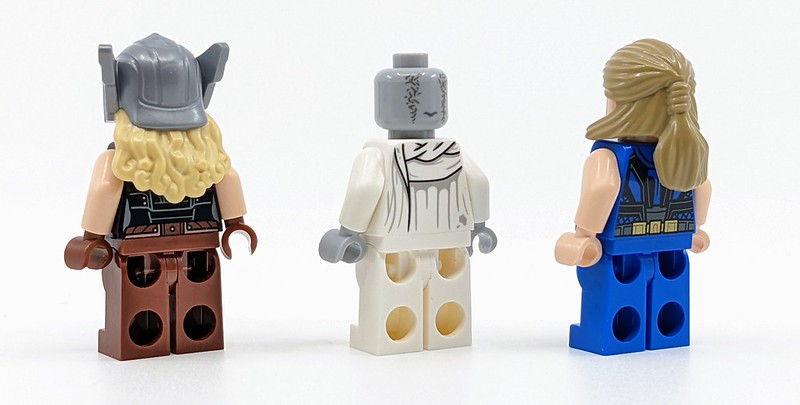 Thor sports plenty of outfits in the trailer and this one represents his new Asgardian garb. This is a brighter blue compared to previous versions and is trimmed with a mix of gold and silver print detail. The Qui-Gon hairpiece is a great fit for the character’s new look. He also includes the Stormbreaker axe. It really is a shame one of the Love & Thunder sets didn’t include 80s Thor. The original MCU Thor is joined by a new variant – Mighty Thor. This version of the God of Thunder has Jane Foster take up the mantel. Her minifigure has a similar design to early Thor costumes and she also wears the classic winged helmet. 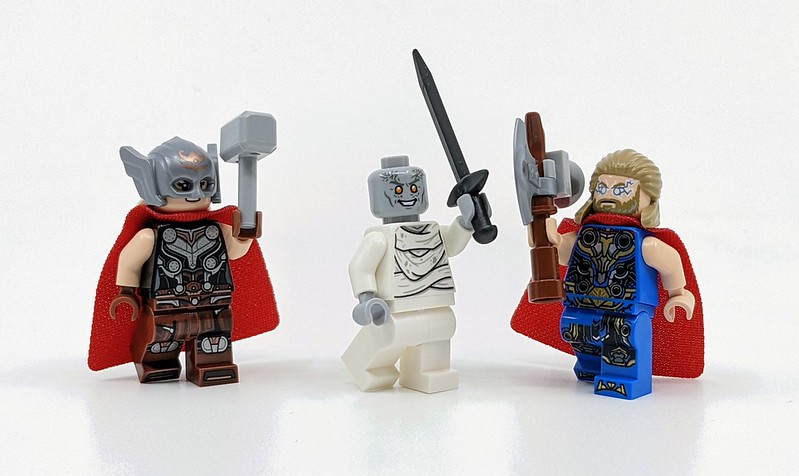 The final minifigure is the bad dude Gorr, who has developed a disliking for the gods. His minifigure is hard to compare to the source material as his on-screen look has yet to be revealed but if comparing it to his comic book appearances or some of the action figures based on the film, he’s certainly lacking a cloak or cape. The rest of the minifigure is less evil looking and more menacingly cheeky. 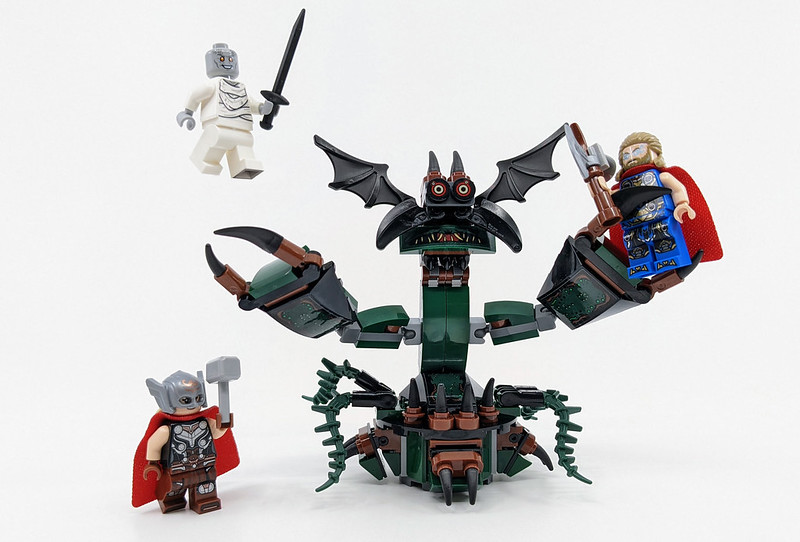 I’m sure there will be those who appreciate the ability to get three of the main characters in a slightly cheaper set. But in all honesty, The Goat Boat is a much better set. This kind of feels like it should have been part of a larger set. It’s also tricky to compare the creature to what’s set to appear in the film. It may play an important role, it may not even feature in the film, like the odd creature in the Spider-Man: No Way Home set. It’s not a bad set, it just feels unnecessary.