Next year marks the 10th Anniversary of the LEGO® Marvel Super Heroes theme and one of the most prominent figures to appear in numerous sets is Tony Stark’s Iron Man. The set I’ll be taking a look at today brings the theme full circle as one of the first LEGO Marvel sets to be released was a buildable Iron Man figure. But there are some big differences, the set from 2012 was inspired by Marvel Comics and used the Character & Creature Building System. The upcoming version is largely crafted from System bricks and offers a different build experience. But does it help kick off a new era of LEGO Marvel sets? Power up the Arc Reactor and take a closer look at the upcoming LEGO Marvel Iron Man Figure. 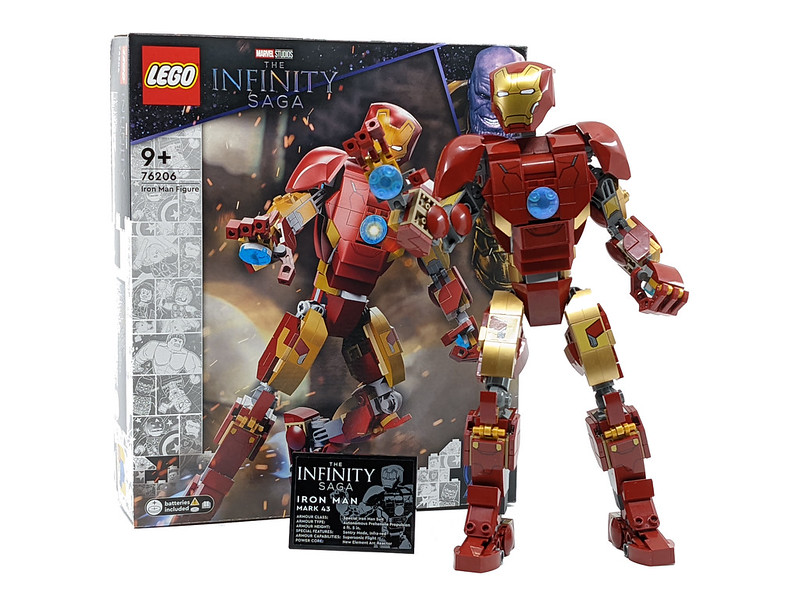 Give Iron Man fans aged 9 and up the ultimate gift: their own Iron Man . Standing over 9 in. (24 cm) tall, LEGO® Marvel Iron Man Figure (76206) is a buildable, take-anywhere toy that brings Marvel-movie authenticity to kids’ action-packed adventures.

Just like the real thing
Based on Iron Man from Marvel Studios’ Avengers: Age of Ultron, this realistic recreation is fully jointed, so kids can move and position the LEGO Marvel figure as they battle their way through exciting missions. A button-operated Light Brick adds extra realism as it illuminates the arc reactor in Iron Man’s chest. When not saving the universe, the Iron Man model looks great on display and includes a removable information plate with details about the iconic armored Avenger. The free LEGO Building Instructions app contains an additional digital guide that kids can use to zoom, rotate and visualize their model. There’s also a guided, real-life, building process that allows young builders to construct with confidence. 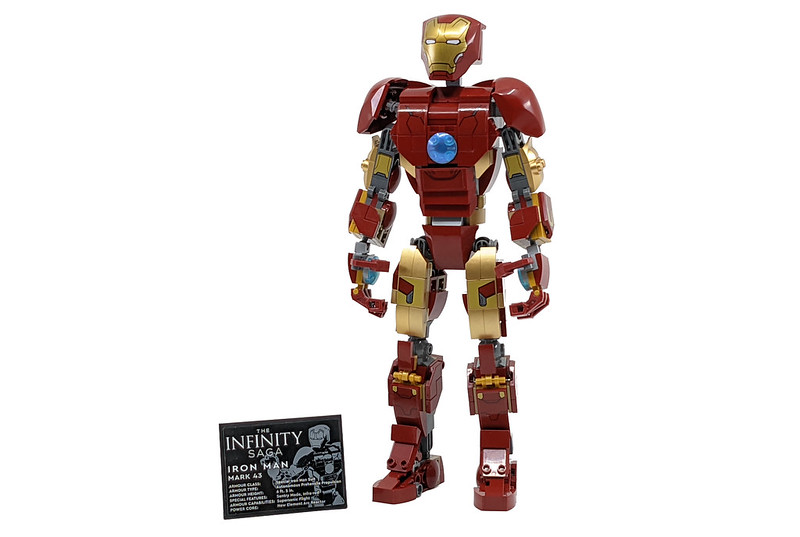 When rumours of a buildable Iron Man suit first surfaced, many assumed it would be a UCS-style large-scale set. But when the set was revealed a few weeks ago, disappointment soon followed. Which is a little unfair, after all, you should really build a set or at least see it up close before passing judgement. Proof in point is Doctor Strange set, I thought it looked OK from the images but after building it, I truly got to appreciate how cool of a set it is. But back to Iron Man, it stands at a similar size to the old CCBS or Ultrabuild figures but has vastly more detail due to the use of stand elements over unique pieces. In fact, the only unique piece is that used to create Iron Man’s head, which features the necessary print detail, with the same element used on the shoulders. It appears to recreate the MK43 from Age of Ultron, even if it lacks some of the gold detail around the shoulders. 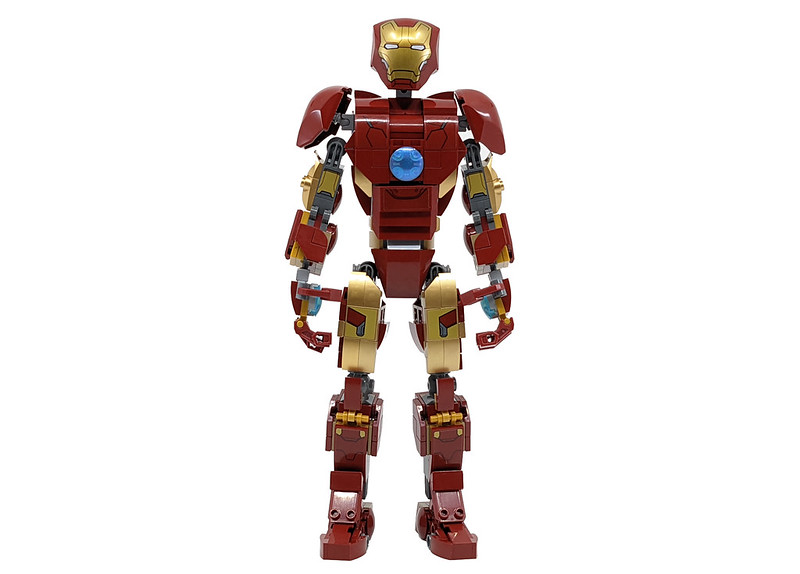 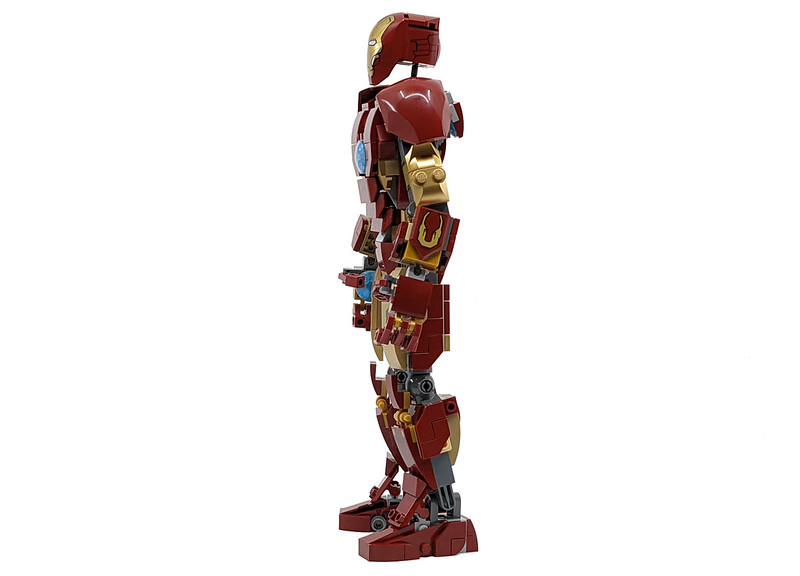 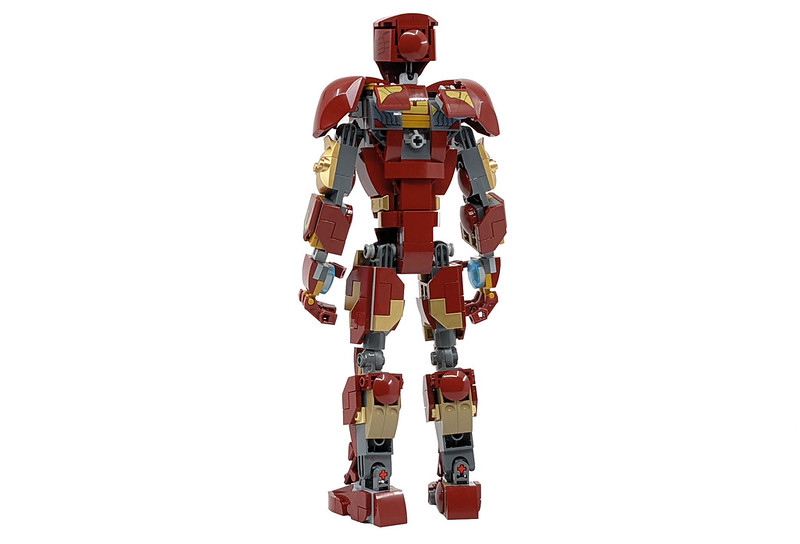 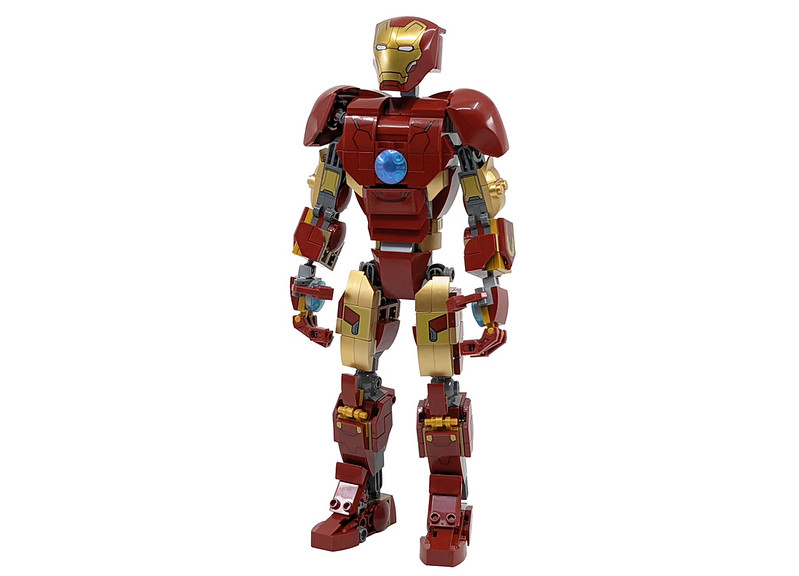 The build is split into sections, which each match the various parts of the suit, they are all pieced together with ball joints. This gives the figure decent points of articulation. Although the shoulder plates do limit how much the arms can be posed. The connection between the legs and the body feels a little iffy, but it’s not as if the body will tip forward merely by looking at it. But the top half is certainly heavier than the bottom half. Despite this, you can recreate some of Iron Man’s iconic poses as well as a few fun ones, should you so wish. 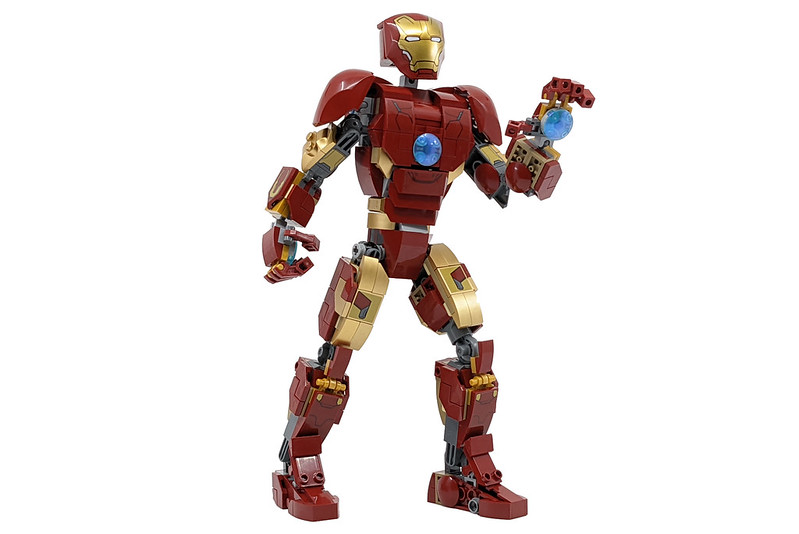 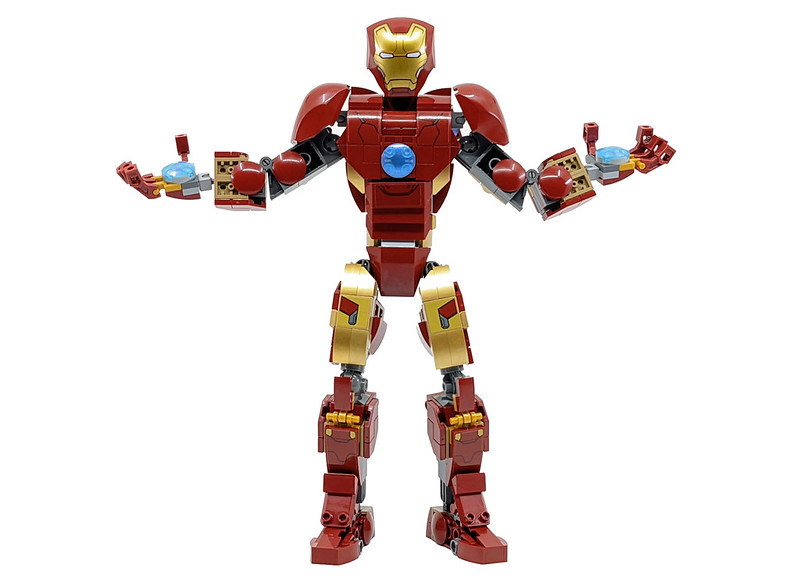 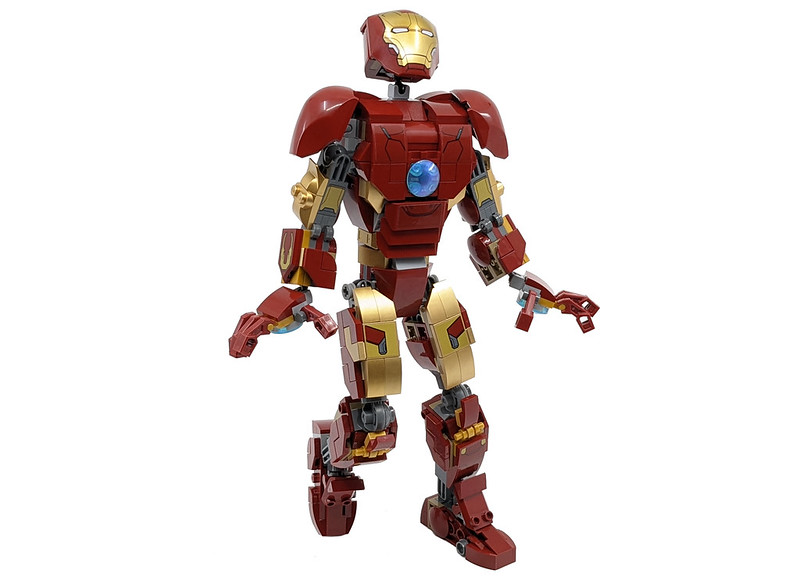 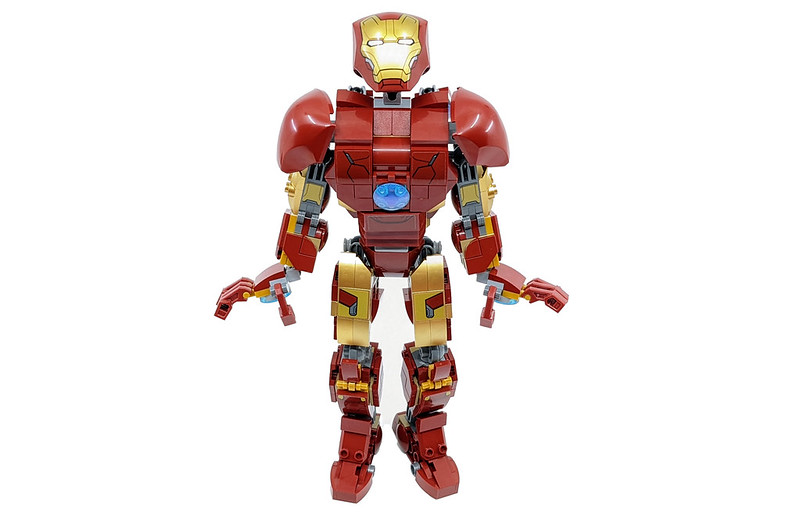 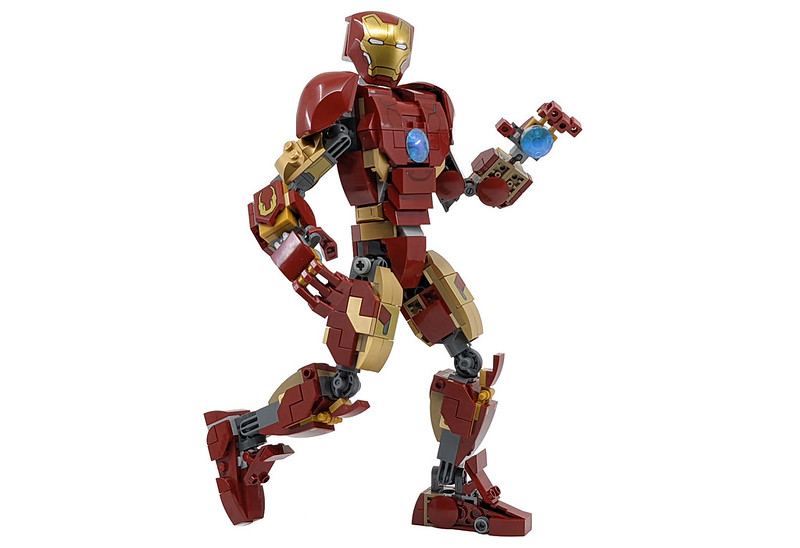 The Arc Reactor and Repulsors both use shimmering transparent light blue 2×2 round shoes, this looks way better than standard transparent pieces. However, the one on the Arc Reactor in the chest section is slightly ruined by the use of an orange light brick. The light-up function isn’t the issue, but the colour of the light is. Orange works for fires but not for an Arc Reactor. On the subject of the chest section, the light brick and the surrounding area is built independently to the body and is slotted into the back of the torso. This then gives access to the switch on the light brick. 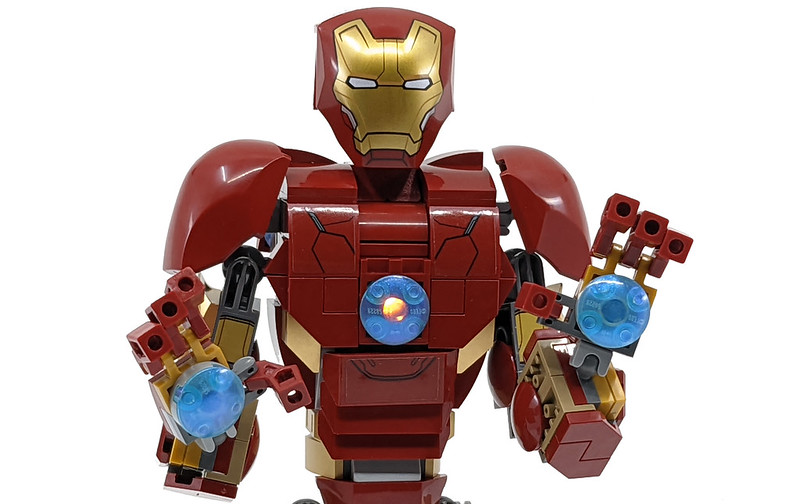 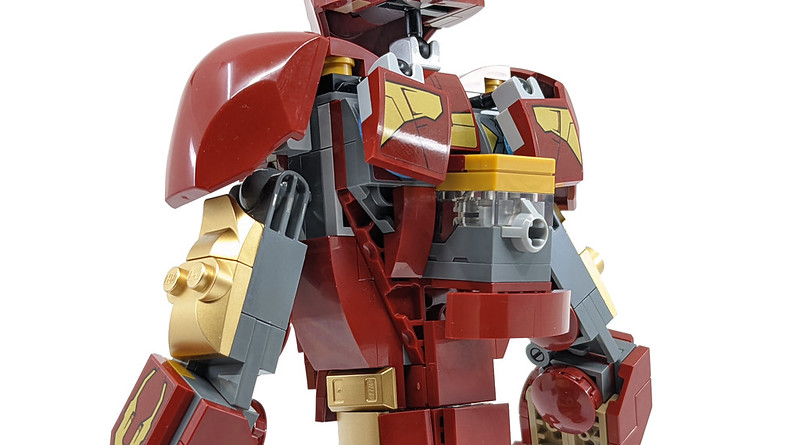 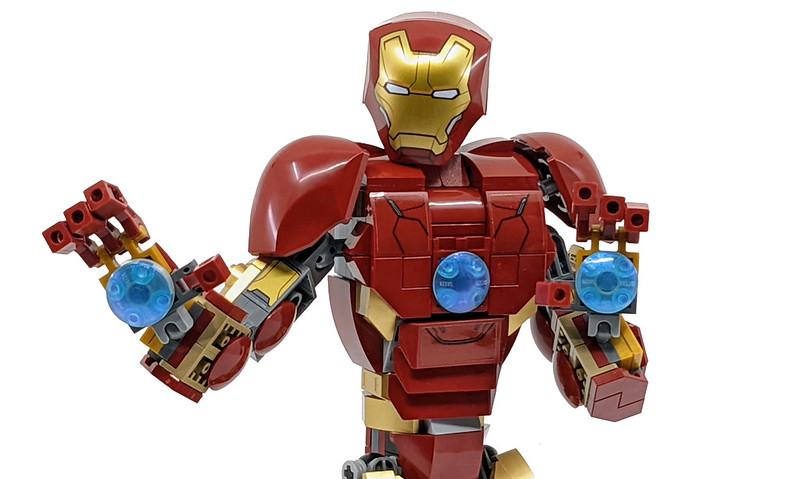 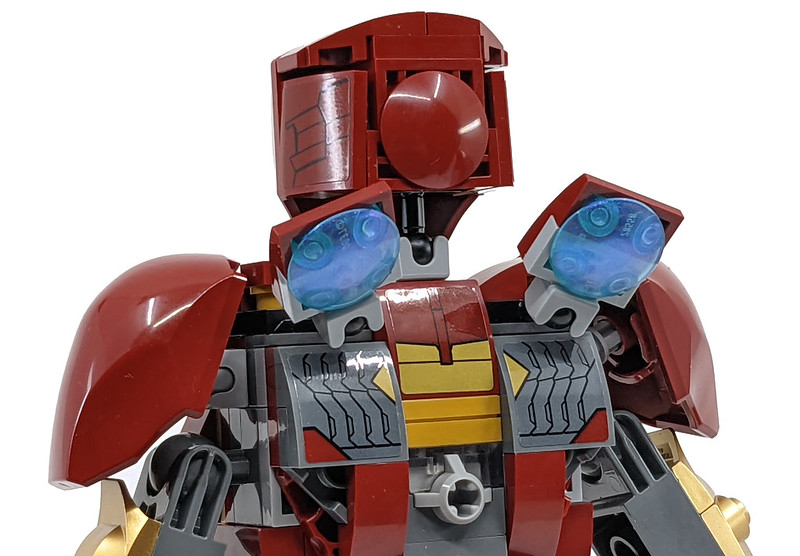 As well as featuring the Iron Man suit, the set also includes a UCS-style information plate. This offers a little information about the MK43 suit. I assume its inclusion in the set, it what caused the original rumours of this being a larger set similar to the Ultimate Collectors Series sets. Of course, a bigger set would certainly offer even more detail but I quite this as a build. It would be interesting to see how other Iron Man suits could be recreated in a similar style. Those would certainly create a pretty cool collection of sets. 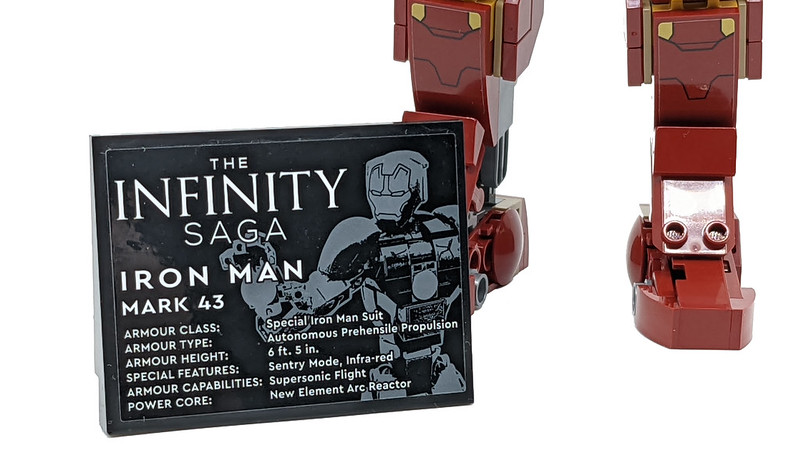 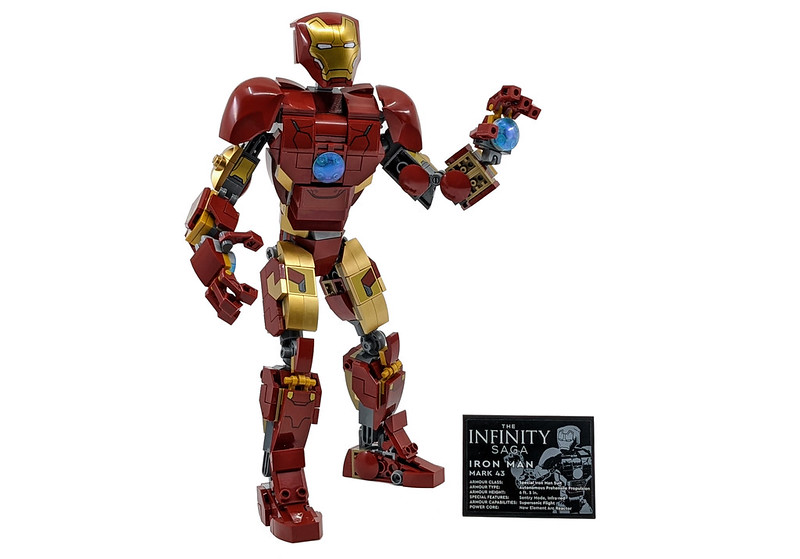