One of the most interesting features of the LEGO® Jurassic World sets are undoubtedly the various dinosaurs. Because of the special moulds they require, there aren’t that many different species across the range. So this particular set is quite exciting, as it introduces a new LEGO dinosaur in the form of a Baryonyx. In the Jurassic-verse one have briefly appeared in Jurassic World: Fallen Kingdom as Claire and Franklin flee the underground bunker as lava seeps through. They have also been included in various Jurassic Park and World videogames. Including LEGO Jurassic World the videogame. But how does the this new LEGO version fare against other dinos? Let’s find out in the final LEGO Jurassic World: Legend of Isla Nublar set reviews. 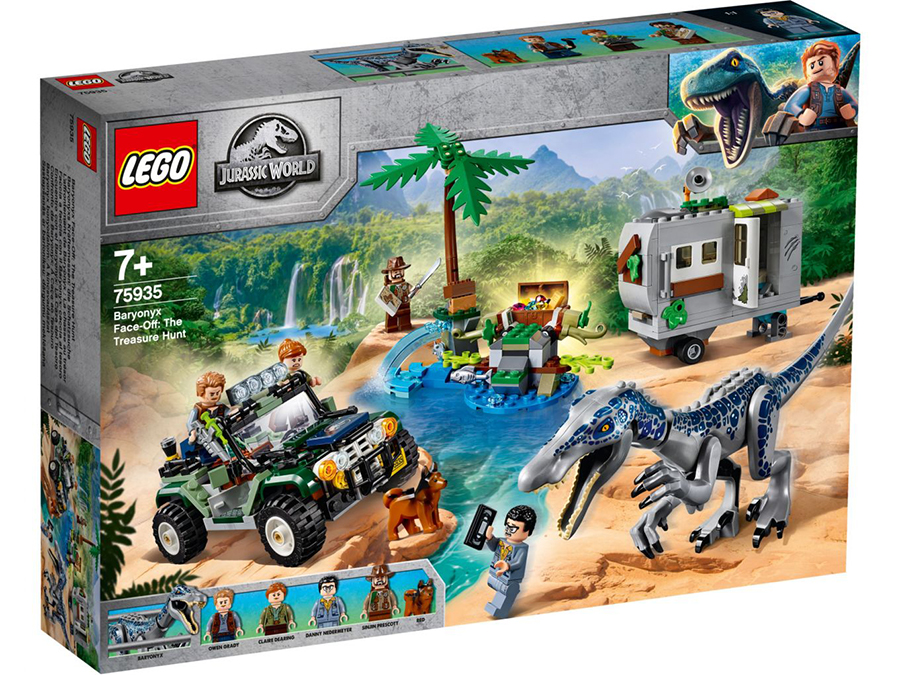 Drama awaits kids as they help Owen Grady and Claire Dearing pursue bad guys through the jungle in LEGO® Jurassic World 75935 Baryonyx Face-Off: The Treasure Hunt. This action-packed dinosaur playset features an offroader with space for 2 minifigures and an attachment point for a trailer which has a buildable rooftop antenna and a detailed interior, plus a buildable jungle scene that has a hidden treasure chest with a reveal function. It also includes a posable Baryonyx dinosaur figure and 4 minifigures with cool weapons and accessories to inspire imaginative play. 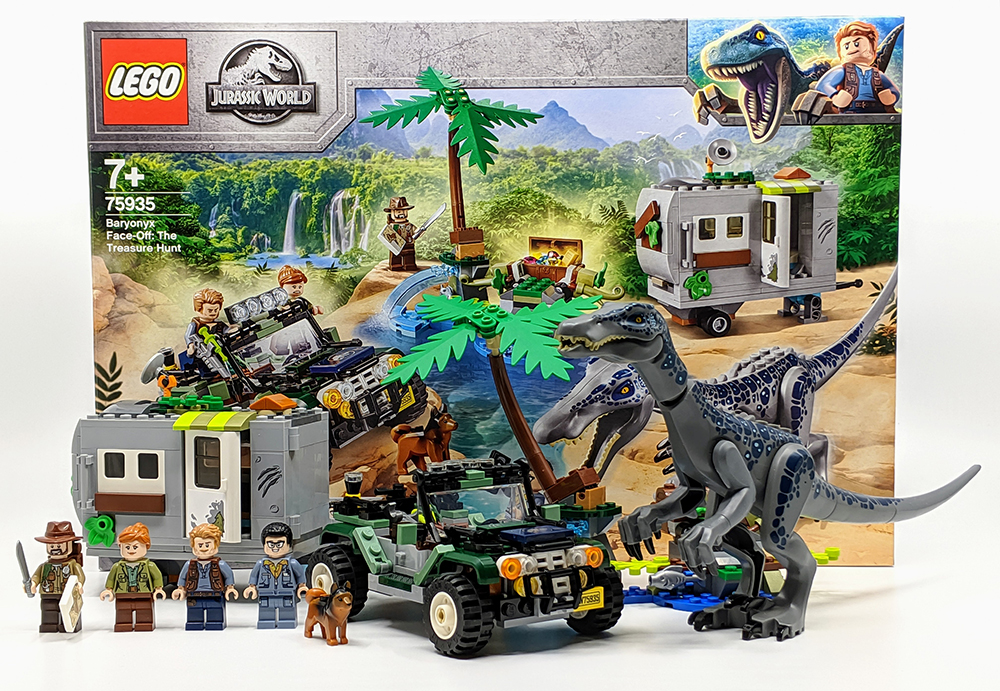 Of the four sets based on the upcoming new LEGO animated series, this is the most normal. No crazy rides, new robotic dinosaurs and no rideable drones. It simply comprises of a vehicle, trailer, a piece of scenery and an all-new dinosaur. Much of the build revolves around the vehicles, especially the 4×4. Which is where the build begins, and it’s actually a surprisingly detailed build. The 4×4 is a nice robust looking build and definitely in the same style as many of the off-road vehicles featured in the Jurassic-verse movies. It’s a similar looking model to the grey 4x4s used in the original movie, although it has a dark and sand green colour scheme. Thanks to the wider size of the vehicle, there is enough room to comfortably seat two Minifigures in the front and one in the rear section. I really like the front section with the various bars and have the engine is partly visible under the JW logo plate. I also really like the crowbar elements used to frame the windscreen and how the tires are set against the mudguards; they are jutting out just enough to make the build look even more rugged. The 4×4 offroader is joined by a trailer, when I first saw the set, this part of it made me think of scene in The Lost World. In which a pair of T. rex attack the trailer holding their baby. The trailer has a number of play features, including an opening door, with a quite unique window section. This has only been used in three other sets. On the same section which features that door, that entire wall of trailer is hinged so opens to give better access to the inside of the trailer. It’s not very roomy in there, but you’ll find a simple bed, computer and a couple of accessories including a video camera, with a cool printed tape tile. 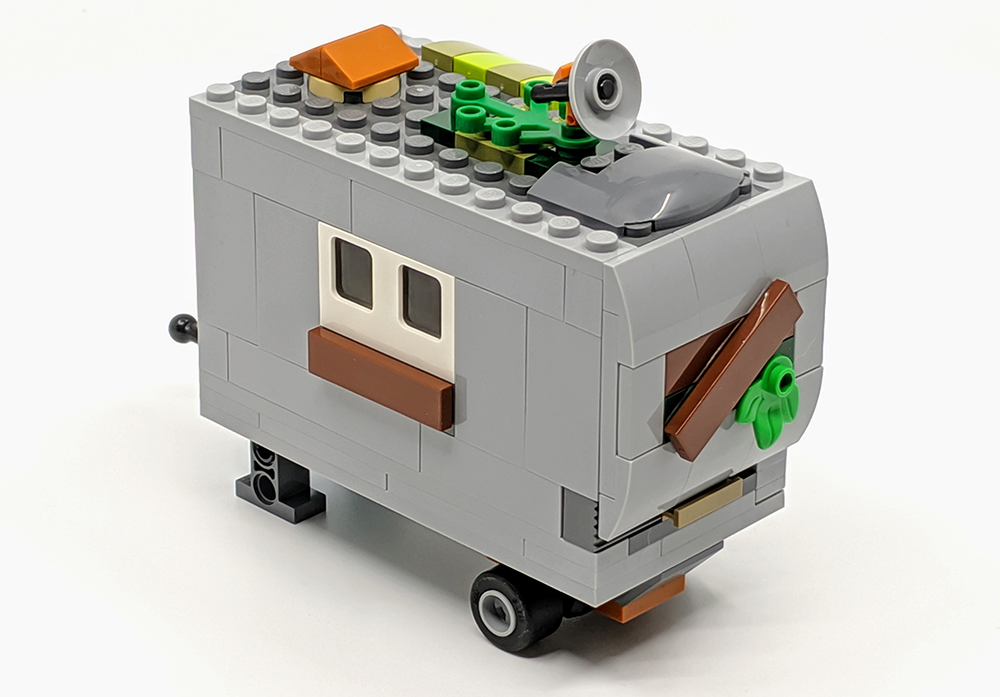 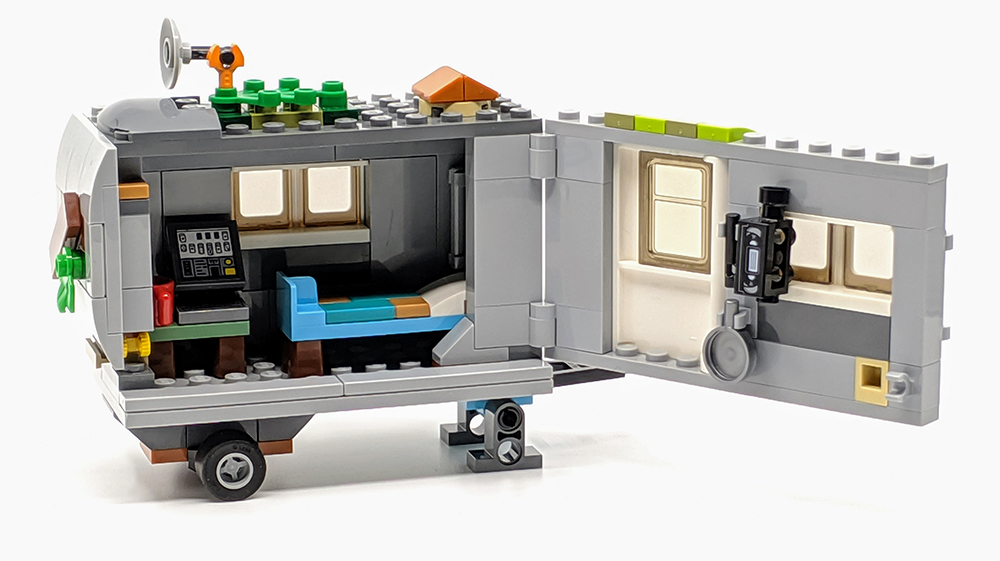 The trailer connects to the 4×4 thanks to a classic ball joint bracket, it’s a nice tight connection so will stay the course during play. Although the trailer is quite small compared to the off-roader, they look quite nice together. Thanks to the ‘T Beam’ elements at the front of the trailer, it sits nicely when connected and is stable when standing on its own. 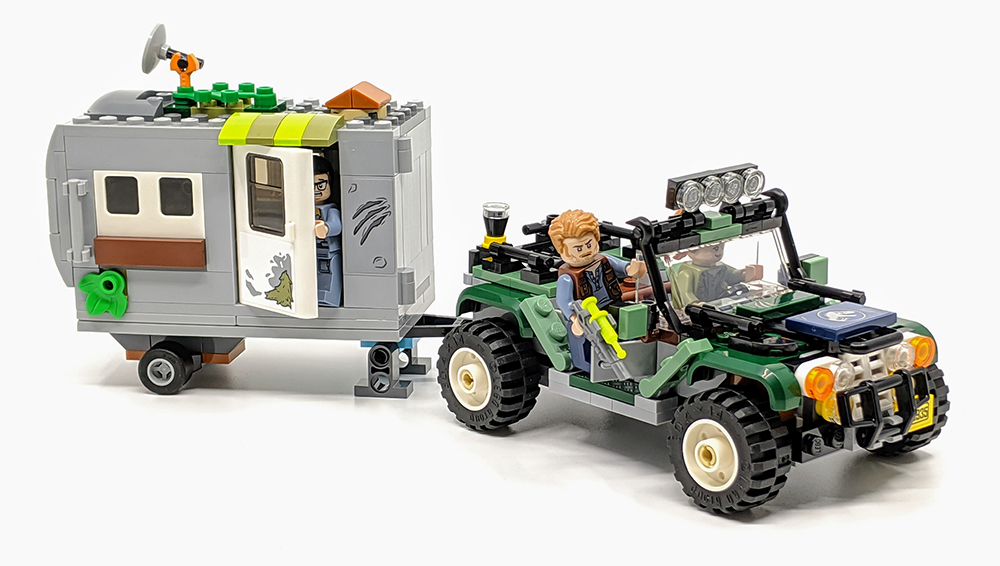 Finally the set has a buildable piece of scenery, which focuses on rocky outcrop surrounded by plants and a little water. Although not a large section of the overall build, it does use some nice parts to achieve various details. This includes a transparent blue cockpit element used to recreate a small waterfall and a couple of fish clipped to the landmass. The palm tree is similar to the one in the recent Flintstones Ideas set, although different leaves are used, these are a little tricky to push on the the strange prong element, but look good when connected. The whole point of this section of the build is to have somewhere else to hide a chest of treasure. Something which appears will play important part of the Legend of Isla Nublar’s story. 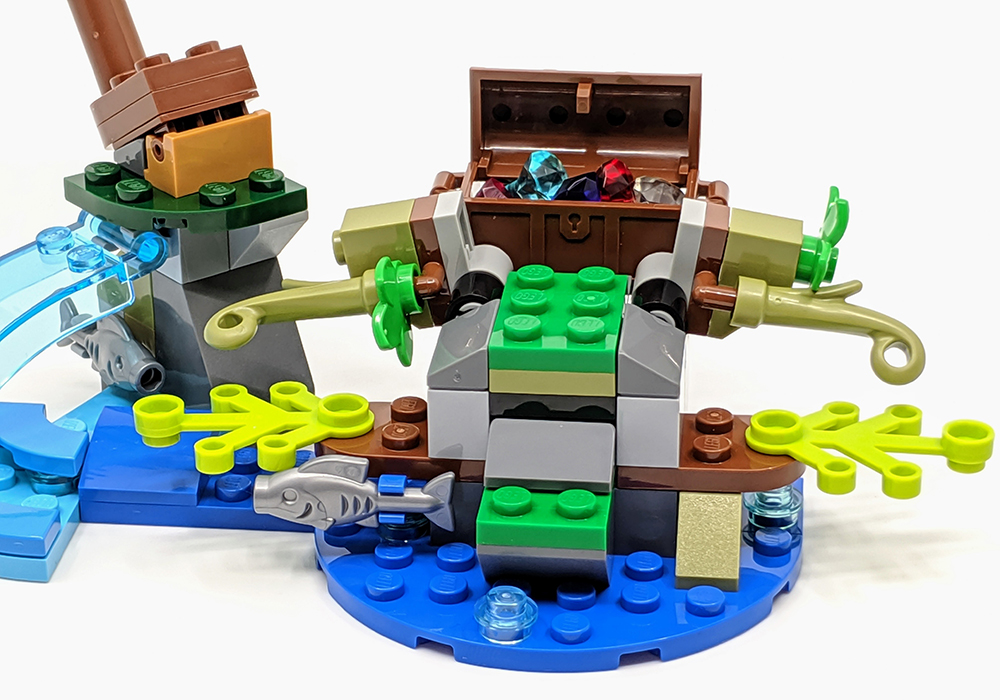 Although a totally new LEGO dinosaur species, the physical Baryonyx uses the same body and limbs as the Indoraptor from the LEGO Jurassic World: Fallen Kingdom set 75903: Indoraptor Rampage at Lockwood Estate. That includes the raptor claws and a fourth claw on its hand, which the real Baryonyx didn’t have. But those reused pieces are recoloured and finished with a fearsome new head element. This is almost crocodile-like, with a long snout and snapping jaw. It’s a cool looking beast and it’s nice that something new has been included in the range. 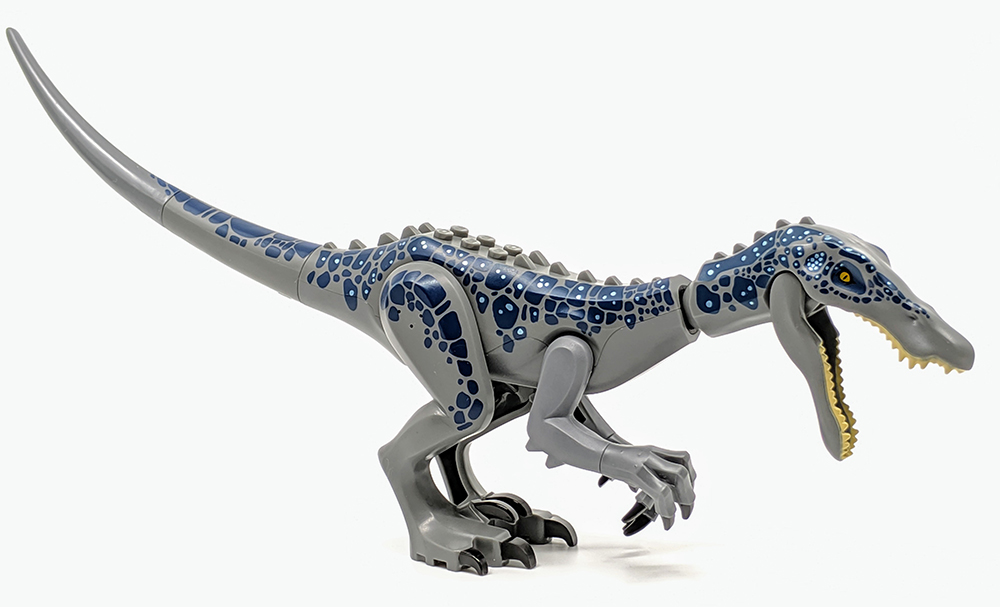 There are four Minifigures included in the set, including two familiar faces and two new characters from the TV show. Both Claire and Owen have been overly used in many of the Jurassic World sets. Owen is the most common of the two, with his appearance the same as he appears in the Fallen Kingdom sets. Claire is unique to this set in the Legend of Isla Nublar range, but she is same Minifigure from the Fallen Kingdom sets. I guess as the series main characters they have to appear in more sets, but it would have been nice if they were a little more unique, especially considering the TV show takes place prior to the first Jurassic World movie.

The other two characters are a little more appealing, first up is a unique version of Danny Nedermeyer. His head element is same as the one featured in the T. rex vs Dino-mech Battle set, but he has a unique torso and legs. His garish shirt is just poking out from under his cool Jurassic World branded overalls. This isn’t as cool as the JW-branded torso from the 75934: Dilophosaurus on the Loose set, but it’s definitely one of the better torso from the entire range. Finally there is Sinjin Prescott, who appears to be a rugged adventure type. He looks quite cheerey considering there’s dinosaurs on the loose, although he doesn’t look as those he’s the evil type, he does have a Isla Nublar map; which would suggest he’s on the search for treasure. As well as the map, Sinjin also has the cool backpack element along with the option to wear his hair or a hat. I like his nicely detailed torso, even though some of it is hidden by the backpack.

The gang are joined by Red the dog, who is a newly recoloured version of the Husky dog element. I really like the brown and black version, plus this particular animal mould is bursting with character. Without seeing the show, Red looks like a fearless cheeky pooch, who would be unfazed by facing off against a dinosaur.

Although this isn’t my favourite set in the range, I enjoyed the build of the 4×4 offroader quite a lot and how bulky it looks. It would have been nice if the trailer was a little bigger than it is, even if this meant losing the scenery section. As mentioned above, I understand why Owen and Claire are in the set, but they could have been a little more unique. But the star of the set is the new Baryonyx dinosaur, it may use previously seen elements, but the result is a great new dinosaur. Something which will interest collectors and kids alike. I will be interesting to see how this and the other sets in range, compare to the TV show. Once it airs in the UK, I may revisit them all. Until then you can read my reviews of the rest of the LEGO Jurassic World: Legend of Isla Nublar range of sets by following the links below.