With a saga of films, numerous books, comics, games and TV Shows, the Star Wars universe has a vast collection of material to draw inspiration from. For over 20 years the LEGO® Star Wars theme has dipped into this array of content to create many different sets. Obviously, some things have seen multiple versions over the years. That’s certainly the case with this upcoming new set. The Republic Tank was first released in 2008 and it included 2 minifigures. A new take on the tank arrived in 2017, this time with 4 minifigures. This month a third version of the Republic Fighter Tank arrives and it features 5 minifigures including a new version of Mace Windu and his 187th Legion Clone unit. But is it an upgrade or just more of the same? Here’s my review of the 75342: Republic Fighter Tank. 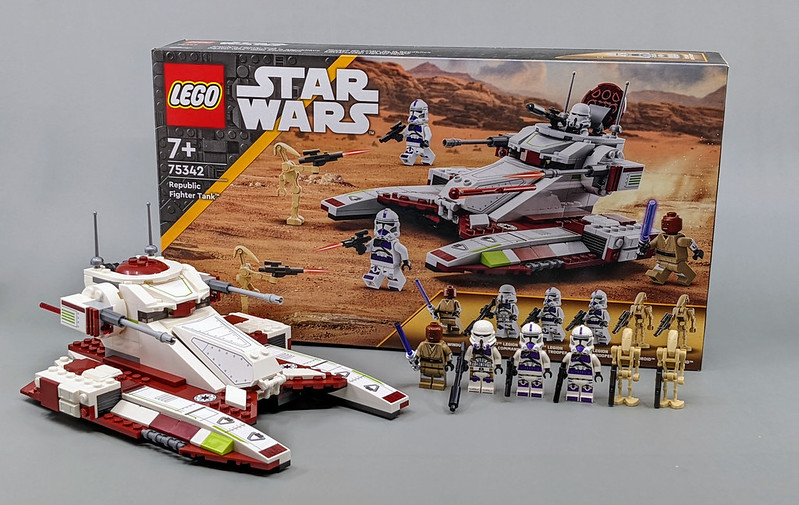 Star Wars: The Clone Wars fans can act out exciting clashes between Mace Windu’s 187th Legion Clone Troopers and the Battle Droids with this LEGO® brick-built Republic Fighter Tank (75342). It features hidden wheels for a hover effect, 2 elevating spring-loaded shooters and a lookout for the Clone Commander on top. There are 4 LEGO minifigures in the set: Mace Windu and new-for-May-2022 versions of the 187th Legion Clone Commander and Troopers, plus 2 Battle Droids – all with cool weapons.

Gift idea for kids aged 7 and up
Thinking of buying this awesome building toy as a gift for a Star Wars™ fan who is new to LEGO sets? No worries – step-by-step instructions are included to guide their fun, creative journey. 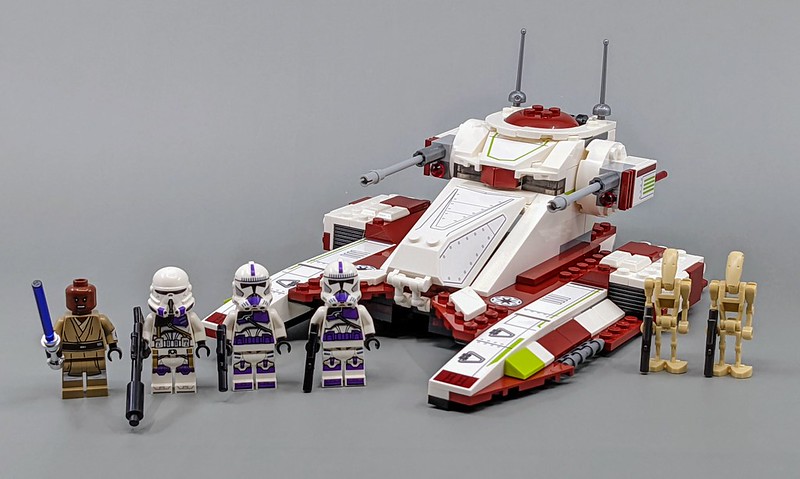 The LEGO Star Wars Design Team certainly likes to take inspiration from unusual places. It’s also common knowledge they revisit past sets to create new variants. This set certainly ticks both boxes. It’s inspired by a vehicle used by the Jedi and their Clone forces during the Clone Wars. It was actually introduced in a series of books and has also appeared in a few Star Wars video games. It also includes a unique group of Clones, dubbed the 187th Legion or Mace Windu’s Attack Battalion. 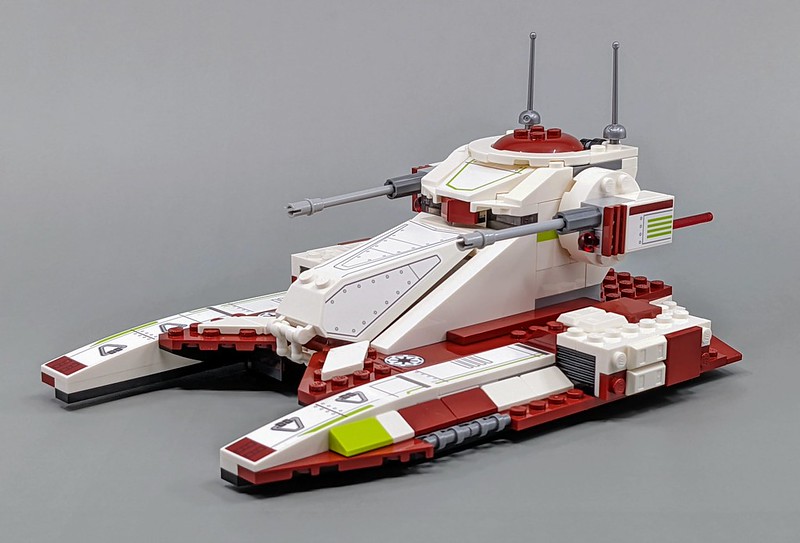 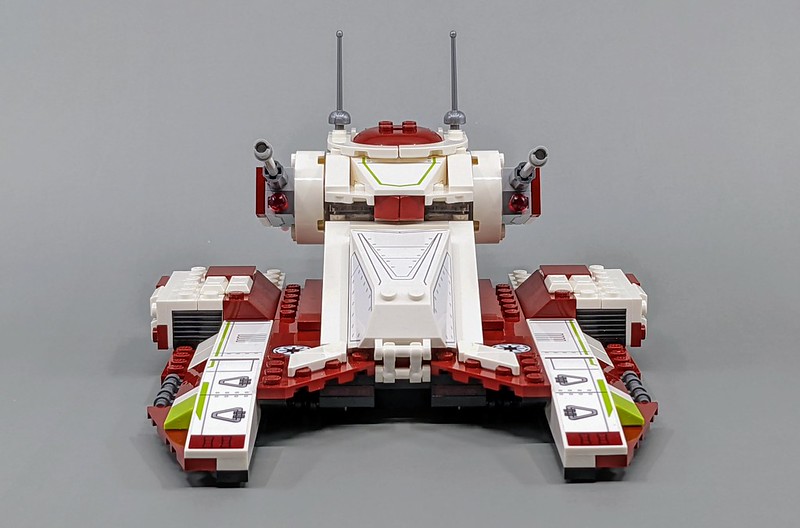 Despite being inspired by the Expanded Universe, the Fighter Tank is considered Canon, even in the new Disney Era. It has a similar style to other Republic armaments, so the colouring of the tank is very similar to the more common Republic Gunship. The build is split across two numbered steps; these are found across 3 bags. The set also includes a sheet of quite a few stickers, these are used to add detail to the tank. 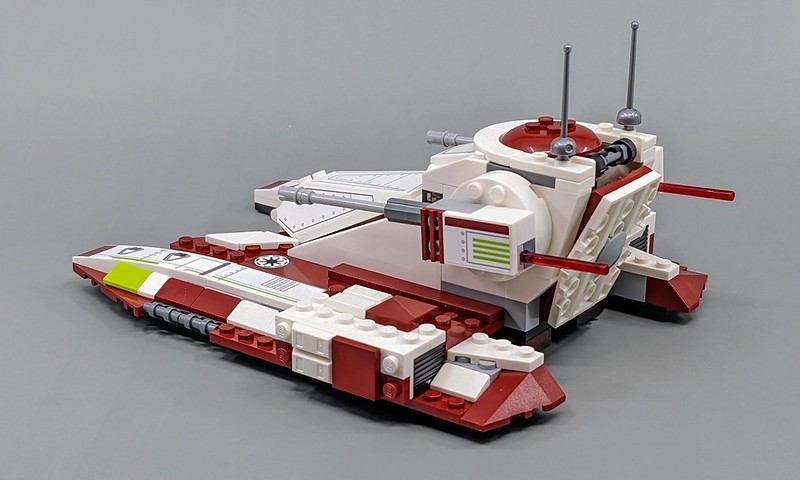 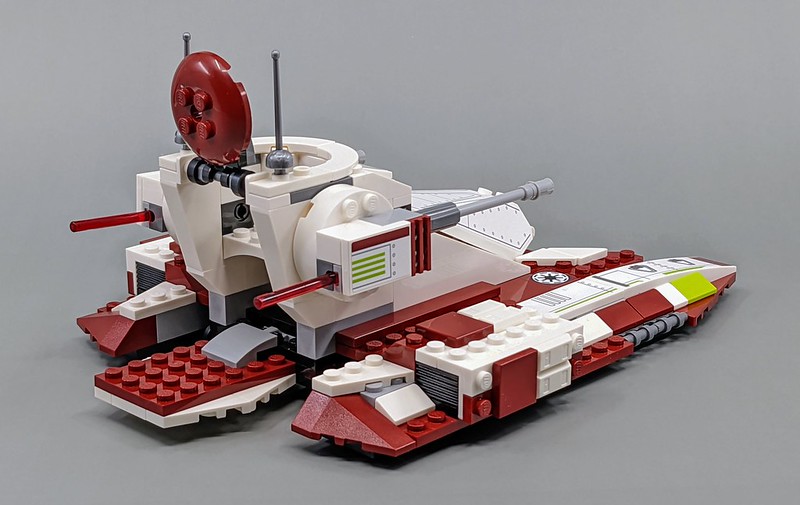 The Republic Fighter Tank hasn’t really been seen in what would be considered main media. But the size and shape of the vehicle is very similar to the Clone Army’s AAT. Unlike the Separatists version, the Republic Tank is a long sharper. With two protruding wings extending from the front of the tank. In between this is a white canopy piece that features a trio of stickers. This covers a small interior area, where a minifigure can be placed. To the rear of this is a panel that also accesses the same interior space. 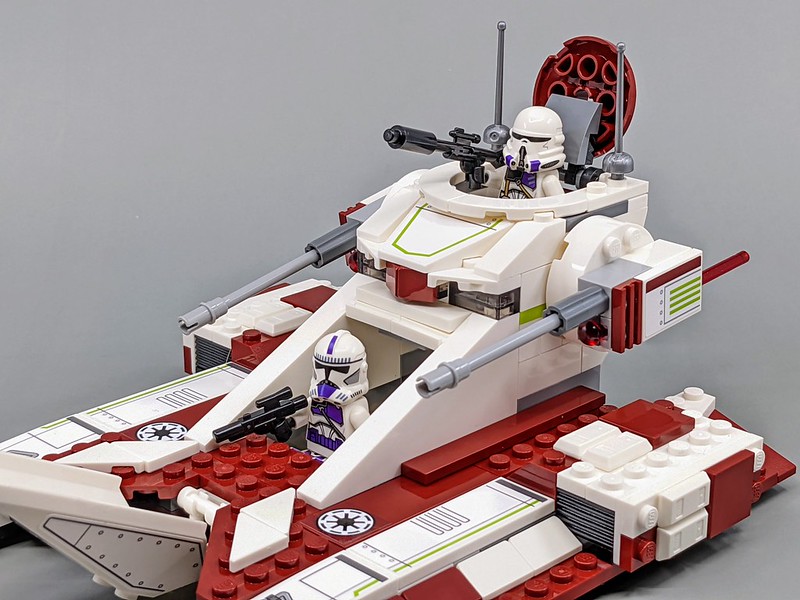 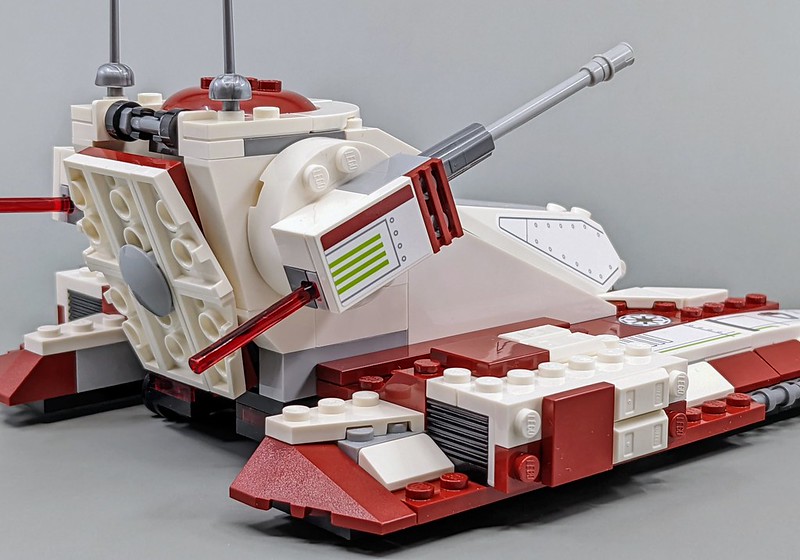 The central section of the tank slopes upwards to create a sort of lookout area for the driver of the tank. This is covered by a domed element, which can be lifted to access a small area inside. Unfortunately, opening it is a little awkward as the dome sits inside the body of the tank. I had to use the studs to get enough grip to be able to lift it or you can poke it up from inside the tank. On either side of the tank are two blaster cannons, these are both ornamental and functional. The grey rods represent the actual cannons but within the sections connected to the body of the tank, are two flick missile bricks, these obviously represent the actual laser bolts. 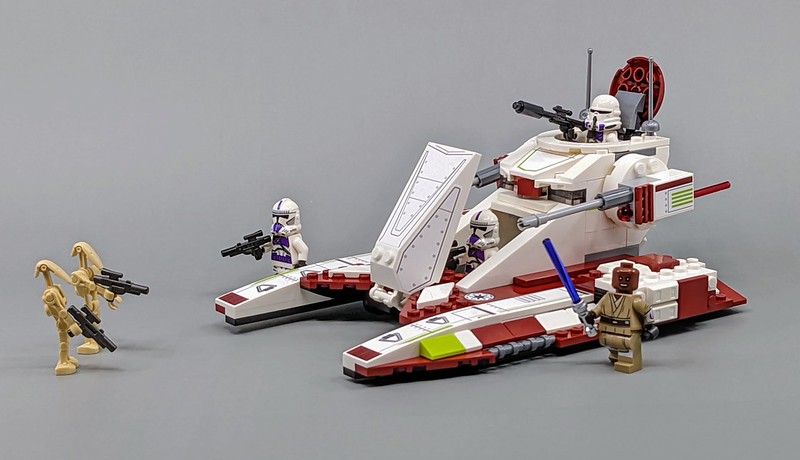 Of the three different versions of this vehicle in brick-built form, the set contains the most minifigures. There are six characters in the set including two Battle Droids and all-new versions of Mace Windu and some Clone Troopers. The Battle Droids remain unchanged from the previous versions. So they are made up of a body, legs, head and two different arms. 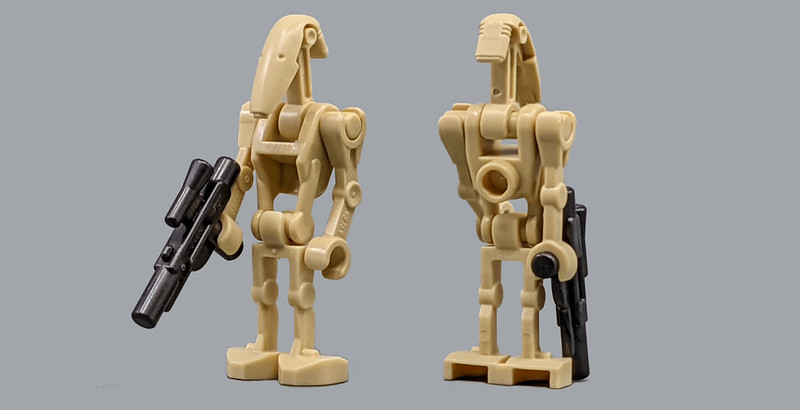 The other characters are far more exciting and include Jedi Commander Mace Windu. The character blends Mace’s Jedi robes with small sections of armour. This is most obvious on his arms, which both feature detailed printing. There have been similar versions of Mace but done have had as much detail. It would have been almost perfect if the legs used dual moulded ones. The brief flash of the white armour on the legs just looks like bandages. 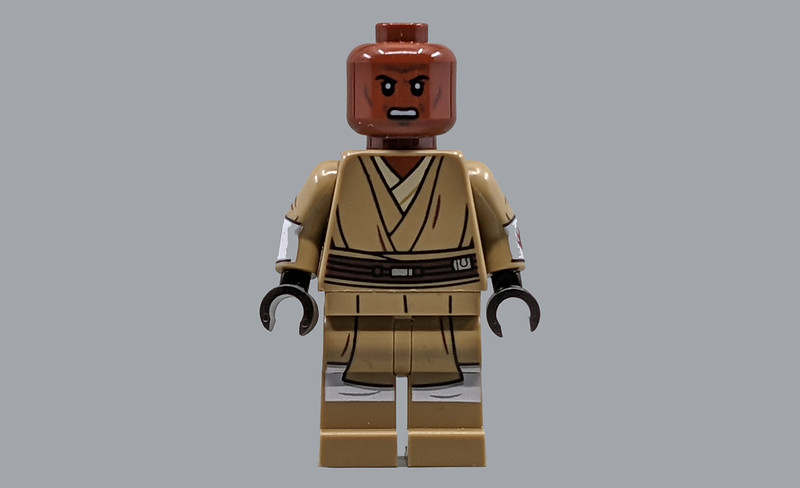 The Clone Troopers are an interesting inclusion, although the tank can loosely be tied to the current Canon, the purple-tinged clones are now considered part of the Legends. In fact, they began life in a Hasbro Star Wars figure collection. Regardless of where they sit in the Star Wars universe, they are pretty cool looking minifigures. They follow the standard appearance of a Clone Trooper, but with jazzy armour, trimmed with purple. There are two standard troopers, these use the common Clone Trooper helmets and they are joined by a Clone Commander, which has slightly different print detail and a different shaped helmet. I could not place where I’ve seen it before but thanks to Chris over on Brickset, it was used in the 2014 Utapau Troopers set and again in the stupendously priced General Grievous’s Starfighter set from 2020. Each trooper has a standard blaster with the Commander having a longer rifle tipped with a candlestick element, which I really like. 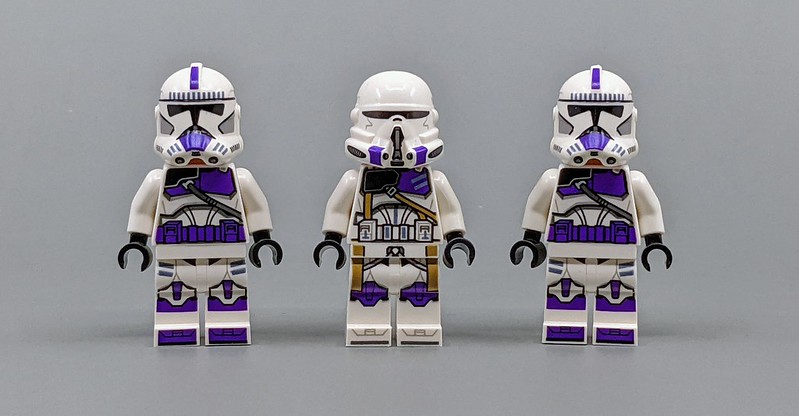 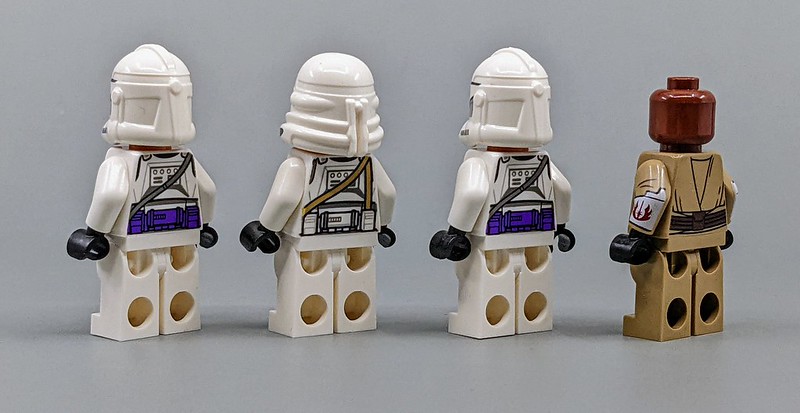 It’s an odd little set, based on an extremely obscure piece of Star Wars lore. It’s also odd how it seems to blend Canon with elements of Legends. Especially since Disney are so adamant to tie together a cohesive timeline to fit with their future plans for Star Wars. Regardless of their place in the Star Wars universe, the Cloner Troopers do look cool, although the same can’t be said about Mace. His top half is great, but his legs are awful.

– A little too obscure
– Mace minifigure could have been better