After Luke Skywalker almost succumbs to a frosty death on the icy planet of Hoth, he’s told to visit the planet of Dagobah. There he must find the famed Jedi Master Yoda and learn the ways of the Jedi. Upon plotting a course to the Dagobah system, Luke and his trusty Droid Artoo arrive on the swampy planet. There they meet an odd little creature who turns out to be Yoda and so begins Luke’s training in the ways of the Force. This diorama is inspired by Luke’s training on Dagobah and features Yoda’s swamp side hut along with new Luke and R2-D2 minifigures. After already taking a look at the Death Star Trash Compactor and Trench Run dioramas, it’s time to see what the final set has to offer with a look at the LEGO Star Wars Dagobah Jedi Training Diorama. 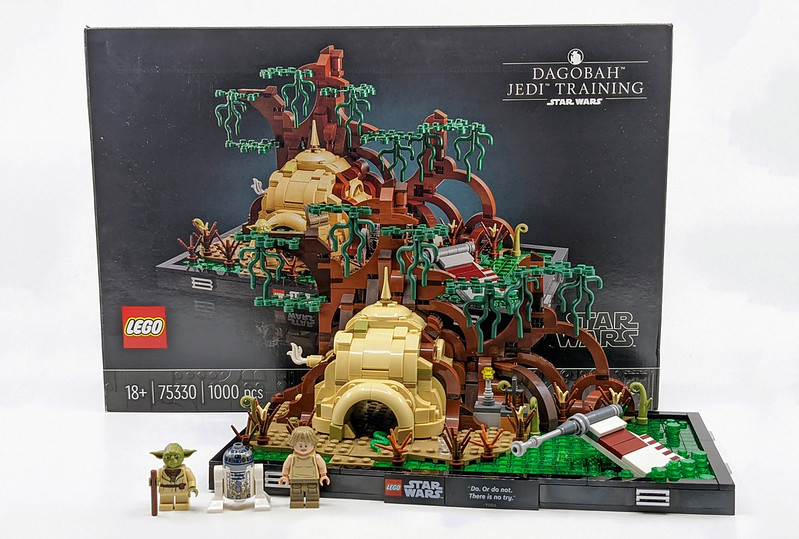 Focus, you must, to construct this LEGO® Star Wars™ Dagobah Jedi Training Diorama (75330). This brick-built display model is packed with instantly recognisable details from an iconic Star Wars: The Empire Strikes Back scene. Recreate Yoda’s hut in the swamps of Dagobah, and the wing of Luke Skywalker’s sunken X-wing. Add the LEGO minifigures of Yoda and Luke Skywalker, plus an R2-D2 LEGO droid figure (Luke and R2-D2 feature new-for-May-2022 decoration). To complete a nostalgic display piece, attach the plaque bearing Yoda’s words: “Do. Or do not. There is no try.”

Step-by-step guide
A great gift idea for fans of the classic Star Wars trilogy, the set includes clear building instructions so even LEGO newcomers can enjoy the fun, creative experience.

Galaxy of joy
It began a long time ago, in a galaxy far, far away. Now the saga continues in your own home with a collection of top-quality LEGO Star Wars sets for adults, including other buildable dioramas depicting memorable scenes. 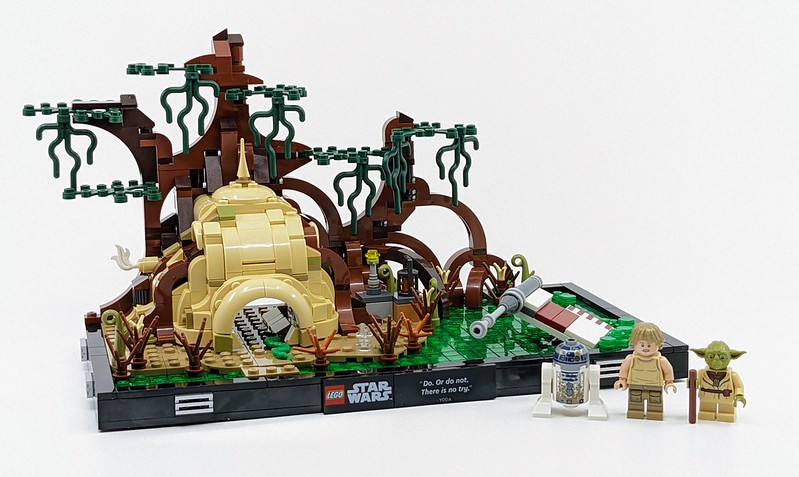 The Star Wars Diorama sets introduce a uniform design standard across all sets. There are a few differences between the dioramas and that is certainly more obvious in this particular scene, due to the lack of a wall. The build is spread across 6 bags, with step 4 having two bags and step 3 featuring just 1×1 green elements used to create the surface of the swamp, but more on that later.

The base of the diorama features the largest surface area of the three sets but doesn’t include a back panel. This works in the scene’s favour in my opinion even if it does present a slightly different format to the two Death Star themed sets. Despite that difference, the black-bordered base is complete with a pair of printed tiles featuring a quote related to the scene. Master Yoda’s wise words are doing something and not just trying are a perfect representation of the moment in Empire Strikes Back. 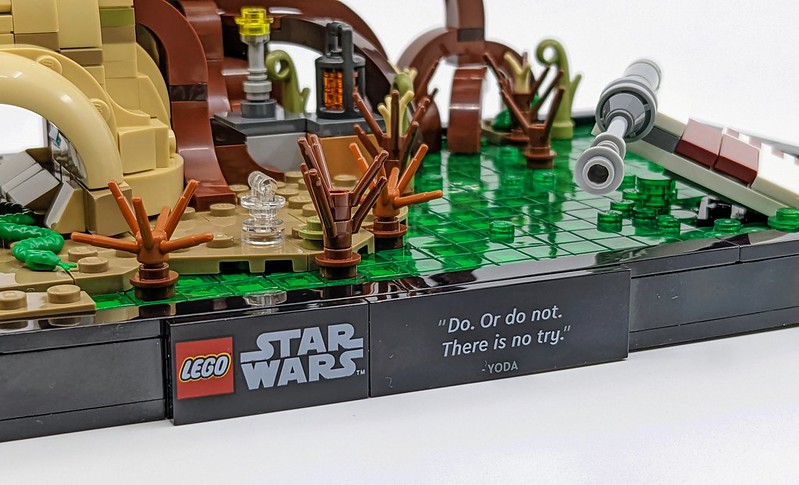 Once the foundations of the base are complete, you’ll start to add the details, which is where things could get annoying for some. Much of the base is covered with a layer of transparent 1×1 plates and tiles. This is where the older age range comes into play. Younger builders would easily get frustrated with placing over 150 individual elements. But I have to admit they work well to create a bubbling swampy surface. Especially when there are also some stacks of studs. Larger plates could certainly provide an easier build but the single elements really do provide a much better looking finish, which is important for a displayable set. 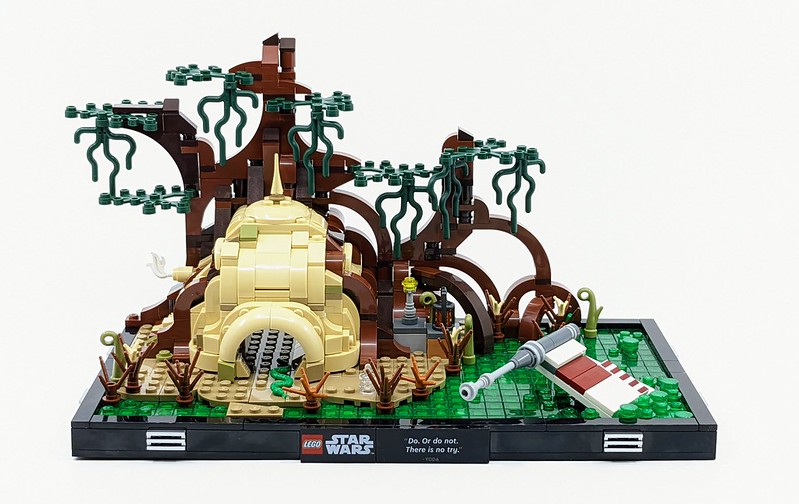 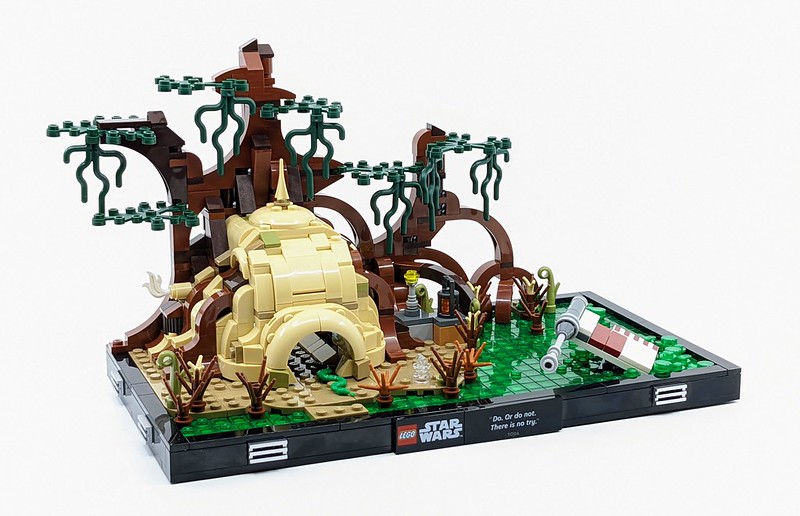 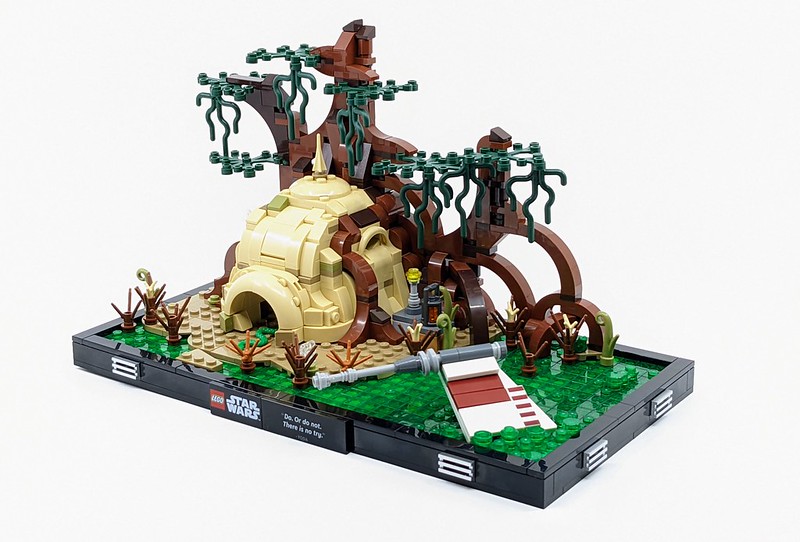 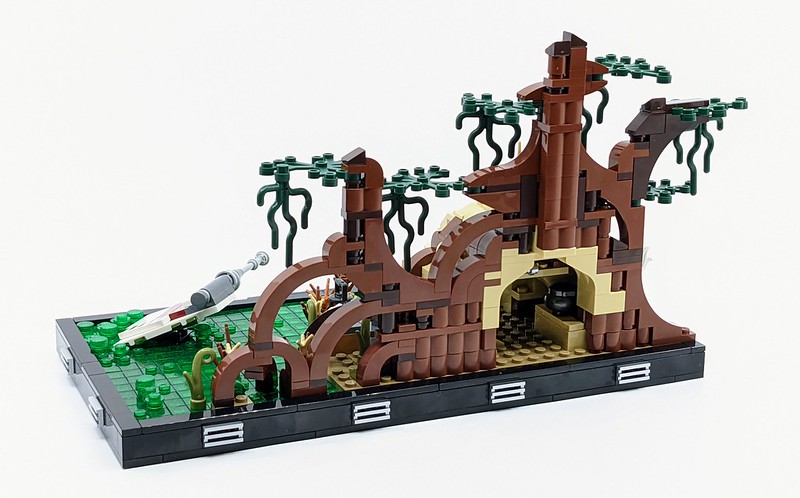 With the swamp and small section of the landmass in place, it’s time to add Yoda’s little hut. Although smaller than previous versions, the added complexities of the build give it more texture and character. The interior is minimal and difficult to access, but this is a display piece, not a playset. The way the hut has been interwoven with tree roots and branches gives the set a unique appearance. I also like how all these elements have been expertly pieced together to be not only stable and firmly secured but also feel organic. 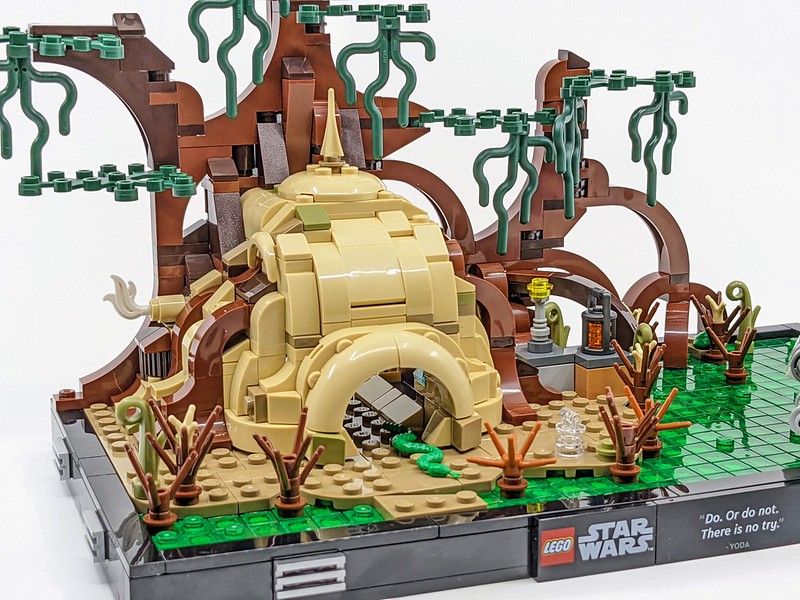 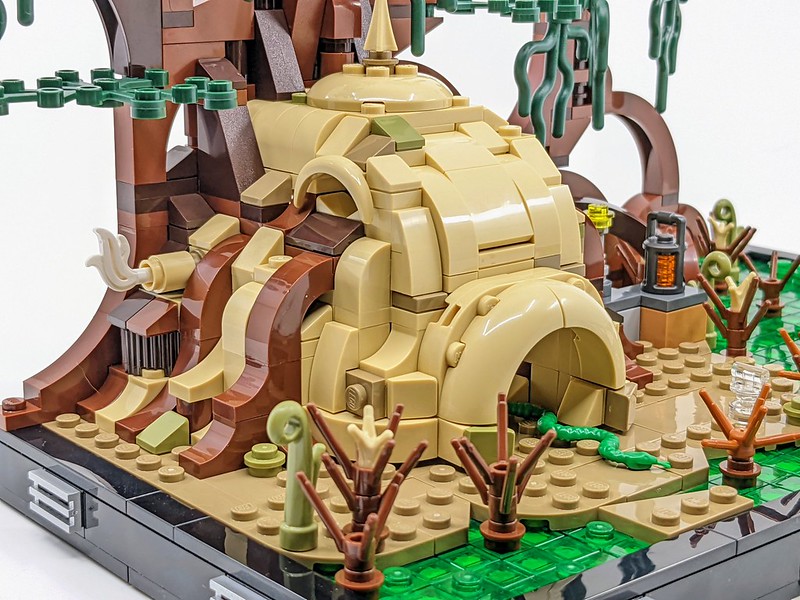 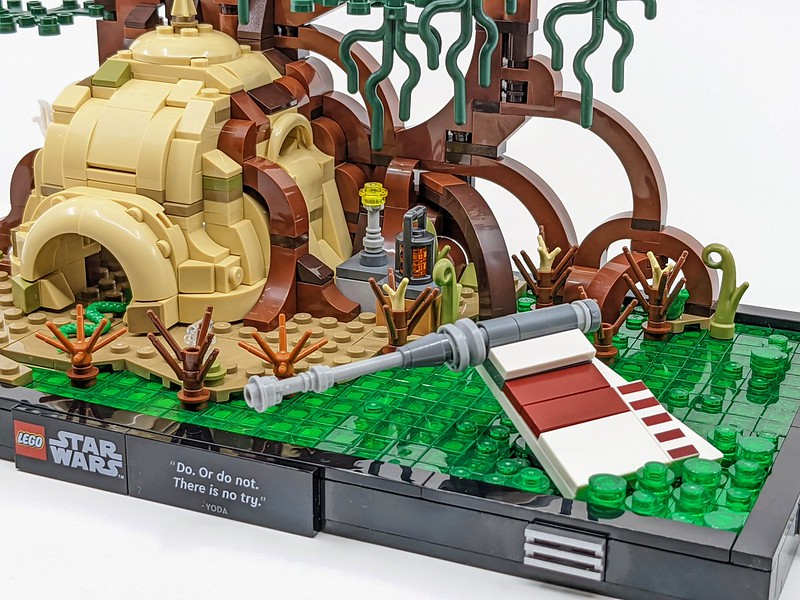 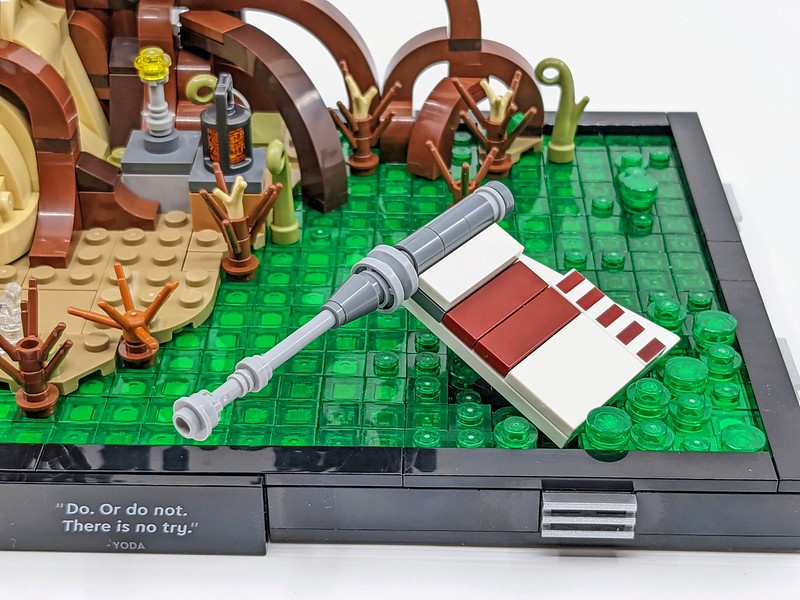 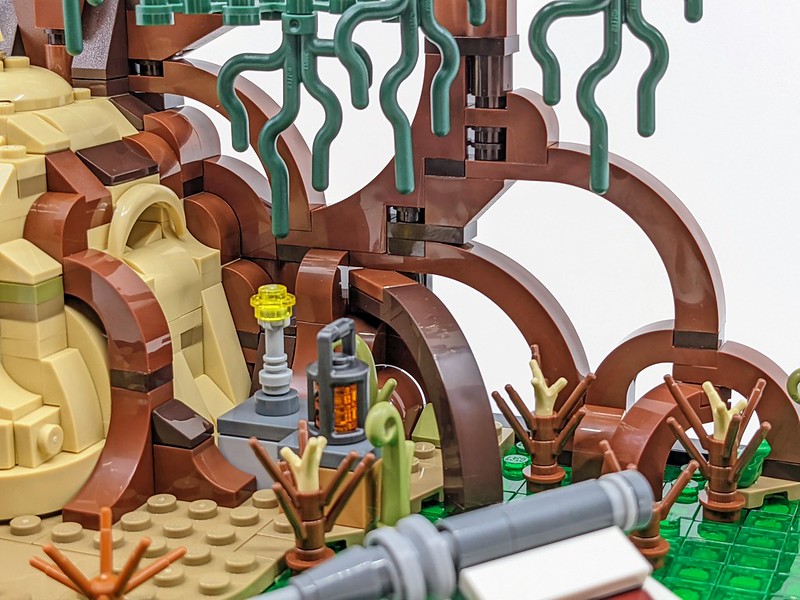 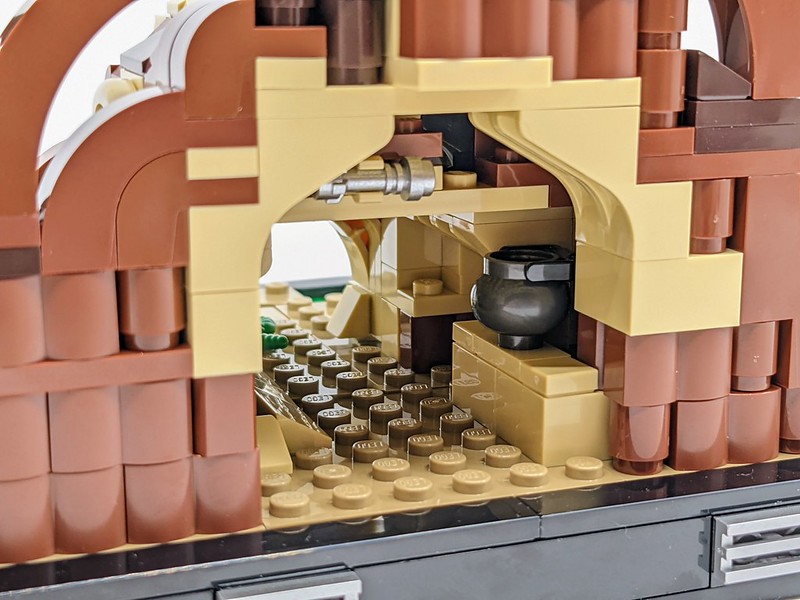 The whole scene feels ‘alive’ thanks to the different textures, angles and other details. You’ll notice some of the trees and plants creep slightly over the border of the base. The tip of the X-wing sticking out of the bubbling swamp water is also a simple yet effective little detail. This is simply mounted on a 2×2 turntable and a hinged plated allowing it to sit at an angle as well as look as if it’s submerged in the swamp. 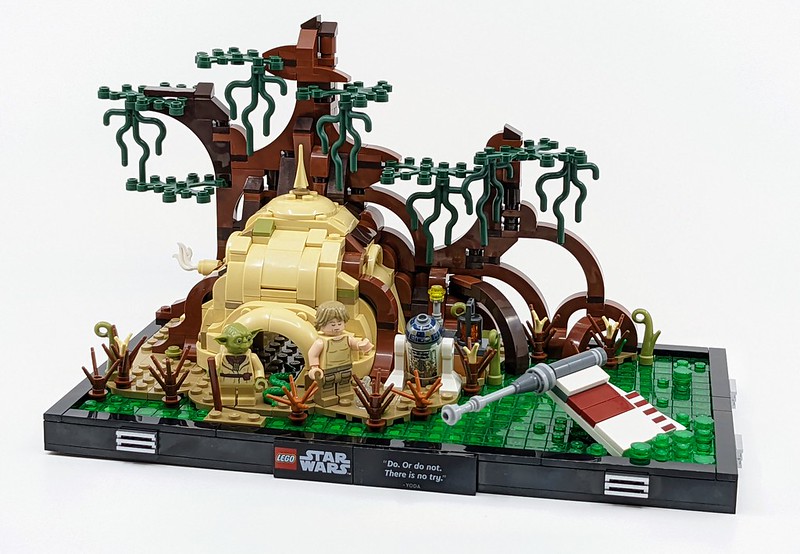 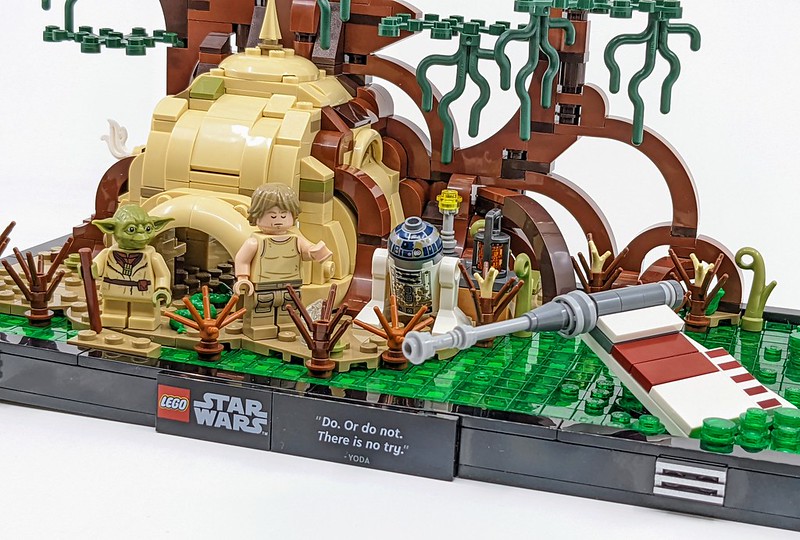 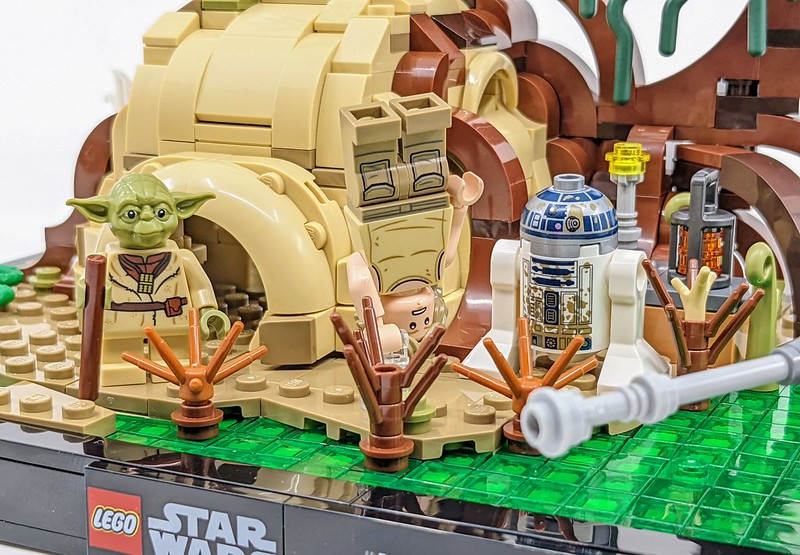 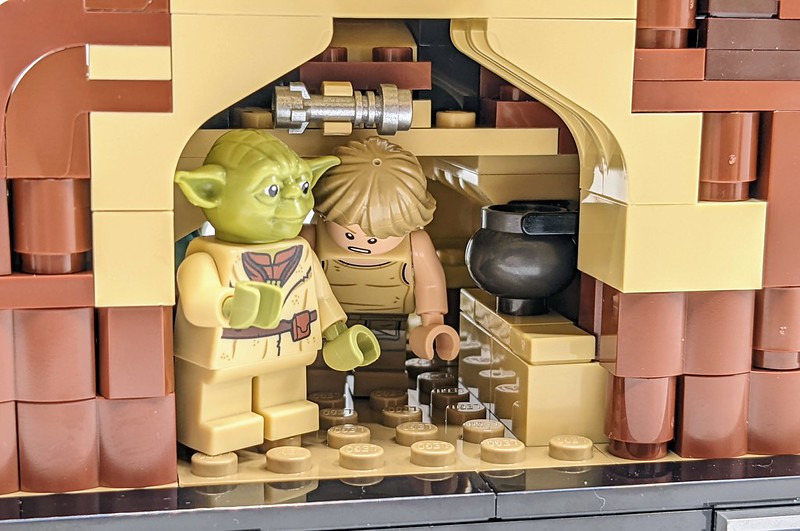 The minifigures are great but offer little in terms of anything new. Yoda is identical to the version featured in the similar Yoda’s Hut playset. Luke is also similar but has slightly tweaked print detailing on both the torso and legs. In my opinion, it’s a step back as the outline on his shirt appears to give him a slimmer figure in a similar fashion to many of the female minifigures. Something I’ve always thought was unnecessary, which is most definitely the case here. Luke’s two different face options are great, especially his Force-focused expression. 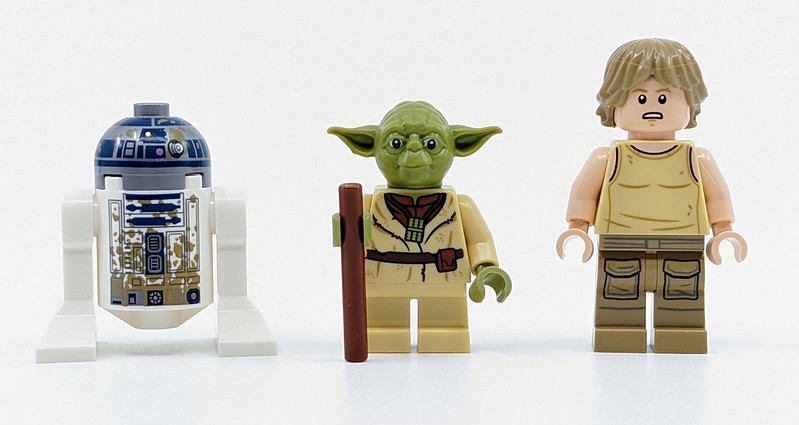 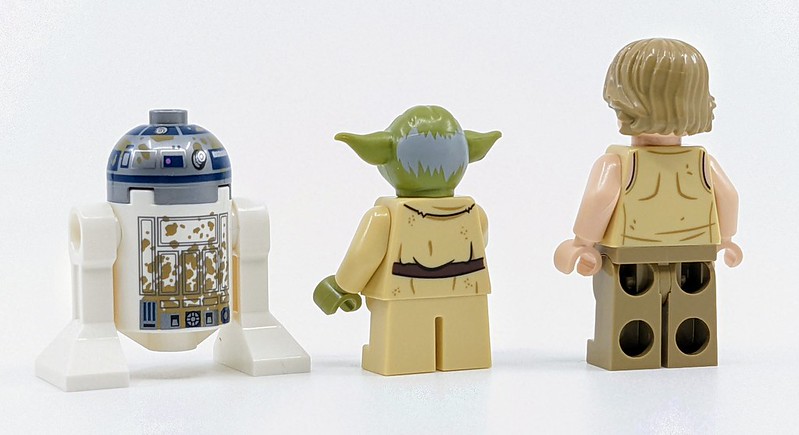 At first glance Artoo seems the exact same version from set 75208, however, just like the version of the Droid from the Trash Compactor Diorama, this R2-D2 figure now features printing on its back. After all these years, Artoo is finally complete. The added muddy splatting all over the Droid completes the look. 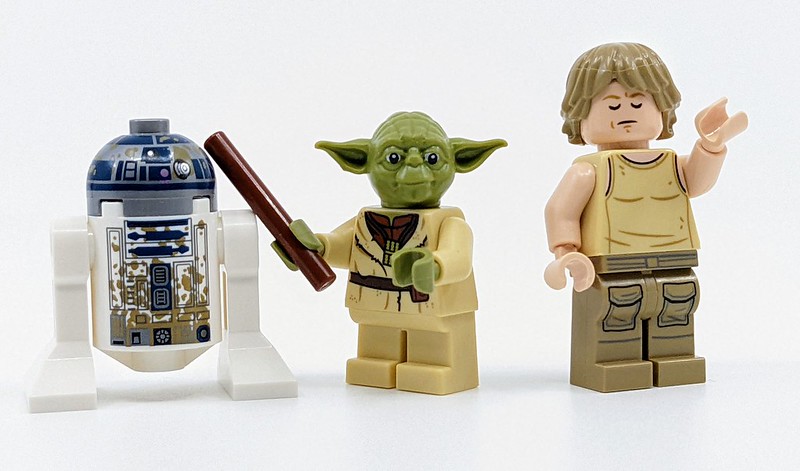 The set is a marvel to look at, with a high level of detail yet an air of simplicity about it. Although the minifigures offer little new, but they are perfectly suited to the scene this diorama takes its inspiration from. The lack of a panelled background is a great design choice as it alludes to the swamps’ isolated feeling. After building all three of the diorama sets, I have to say this one was the most enjoyable to build and fantastic to look at.