Over the past few weeks, I’ve been taking a look at some of the newly released LEGO Star Wars sets and those reviews continue with a look at The Justifier. Cad Bane’s new ship is a recent addition to the Star Wars canon and this marks its very first appearance in LEGO form. After making its debut in Star Wars: The Bad Batch, this is the latest LEGO set to be inspired by content from Disney+, marking the popular streaming service a key source for LEGO products. So here’s a closer look at Cad Bane’s Justifier ship. 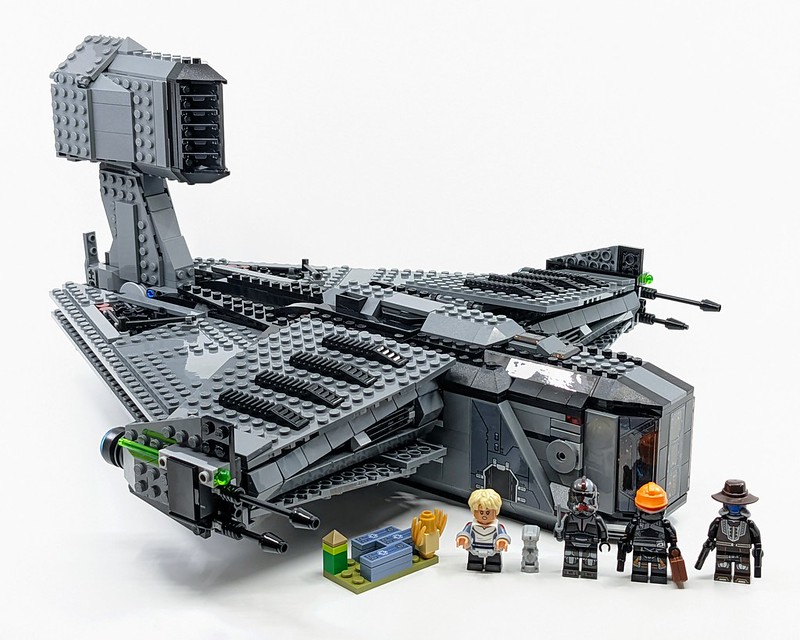 Children aged 9 and over can recreate epic Star Wars: The Bad Batch stories with this superb LEGO® brick-built model of bounty hunter Cad Bane’s starship, The Justifier (75323). Fans will love the realistic features, such as the rear engine that folds up and down for flight and landing, a detailed cockpit, spring-loaded shooters on the wingtips and a ‘laser’ jail cell to imprison Omega. There are 4 LEGO Star Wars™ minifigures of Cad Bane, Omega, Fennec Shand and Hunter with cool weapons and accessories, plus a Todo 360 LEGO droid figure to inspire imaginative play. 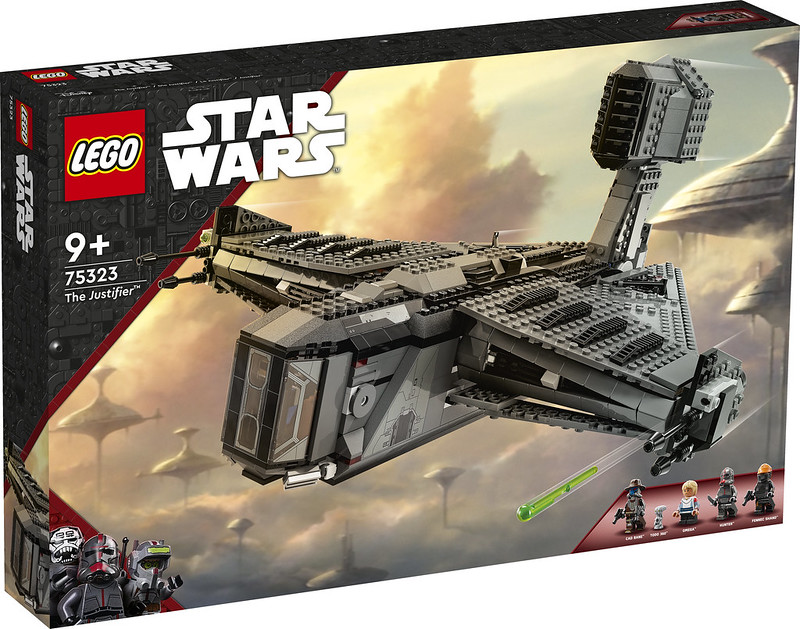 The Justifier is a recently introduced Star Wars ship, which made its first appearance in the Clone Wars spin-off, The Bad Batch. However, its history begins long before the most recent Disney+ Star Wars animated series. It was originally designed to debut in an unproduced Clone Wars story-arc. Concept art shows a similar-looking ship but the eventual design as seen in The Bad Batch is a lot more blocky whilst retaining the cubic cockpit and towering rear engine. It’s a surprising choice for a LEGO set due to its fleeting appearance in The Bad Batch, but it’s always nice to see something new from the LEGO Star Wars theme. 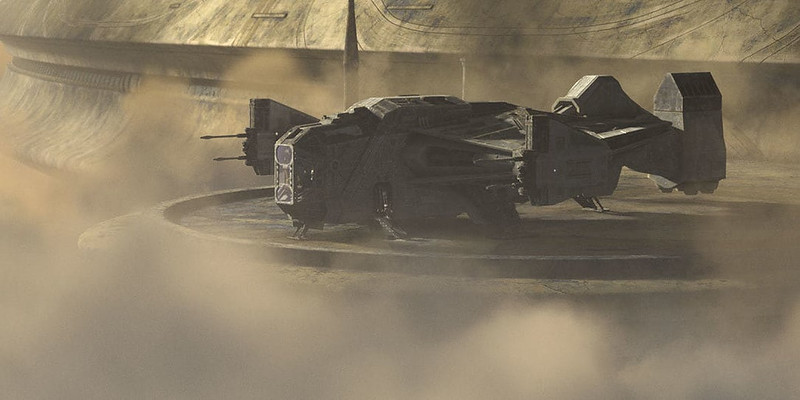 The Justifier is a pretty hefty set, which is more than suggested by the box size and its price tag. However, it only features 6 build steps, spread over 12 bags. With a single sticker sheet and the much-maligned new minimalistic instructions booklet. Which, the more I see, the more I dislike them. Thankfully they are merely there to provide the build steps. 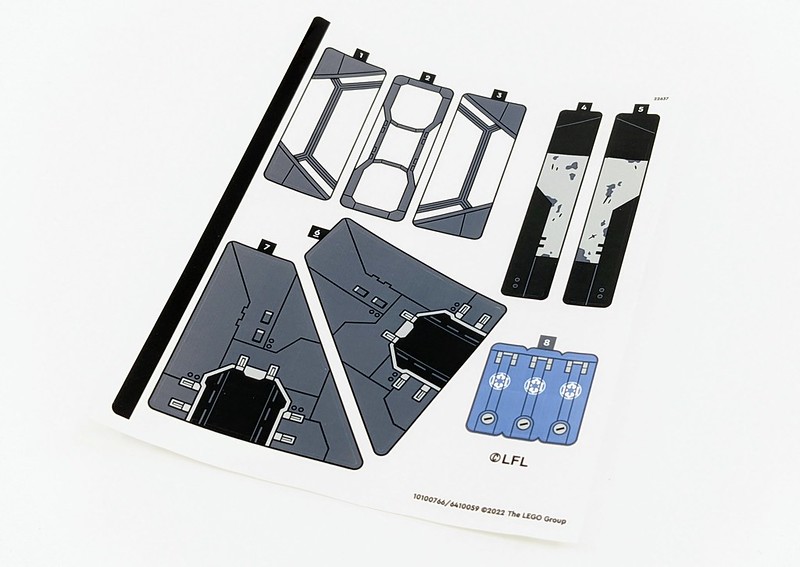 The build process is quite similar to most Star Wars ships, with the core of the ship being the base and much of the detail being added via connectable plates. Despite the similar style build, the actual visual appearance of the ship is unlike any other Star Wars vehicle. Normally, certain ships have influences from elsewhere in the franchise but not The Justifier. This in part, thanks to the ship’s large kite-like wings and its unique tail fin. 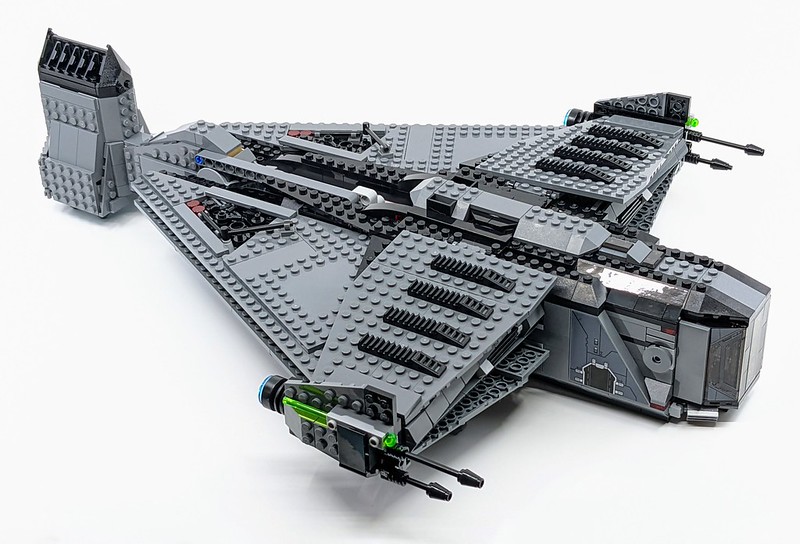 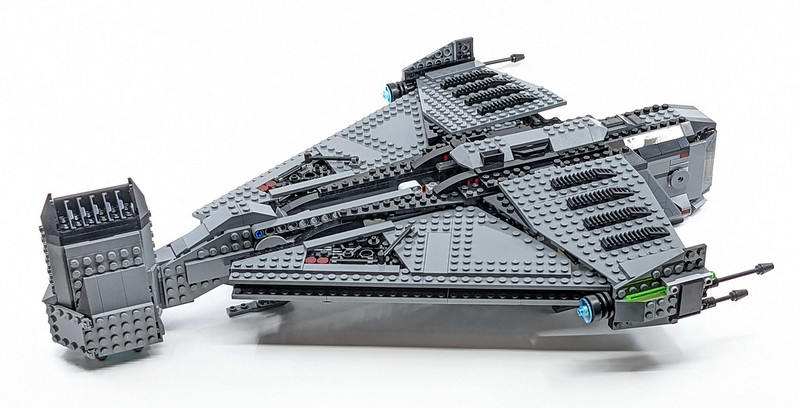 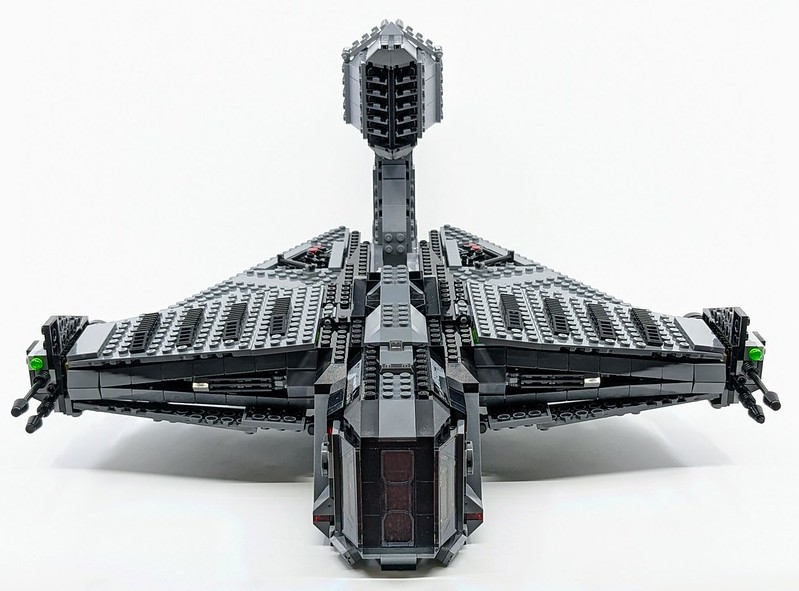 The wings are each built separately to the hull of the ship and use a mix of large plates and Technic beams to craft their shape. The rest of the detail is achieved with additional sections clipped to the ship but angled to the shape of the wings. I did find one of the front sections of the wings didn’t sit flush with the rest of the structure due to the way the section naturally bowed. But it became less obvious when other sections were added. The way the wings are created also allows them to double up as storage. So additional blaster bolts can be clipped inside each wing. Admittedly, this area is grossly oversized for merely holding spare bolts. 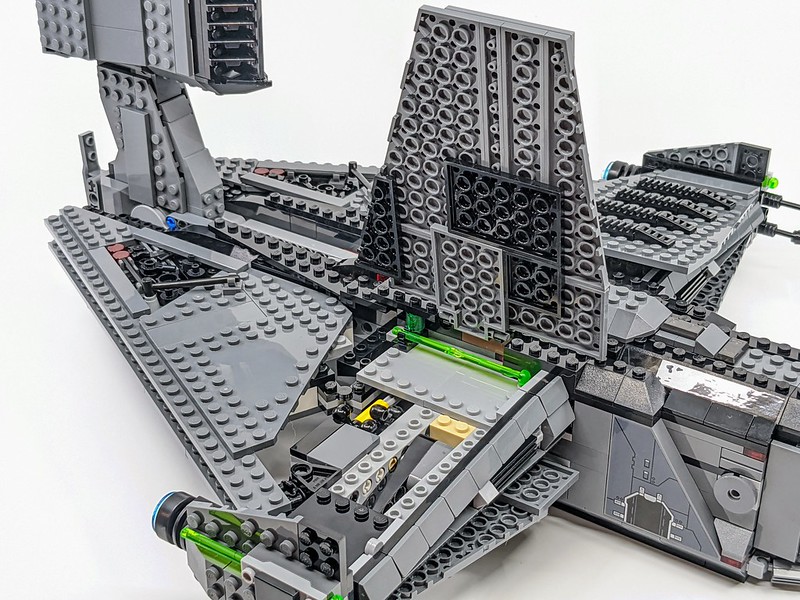 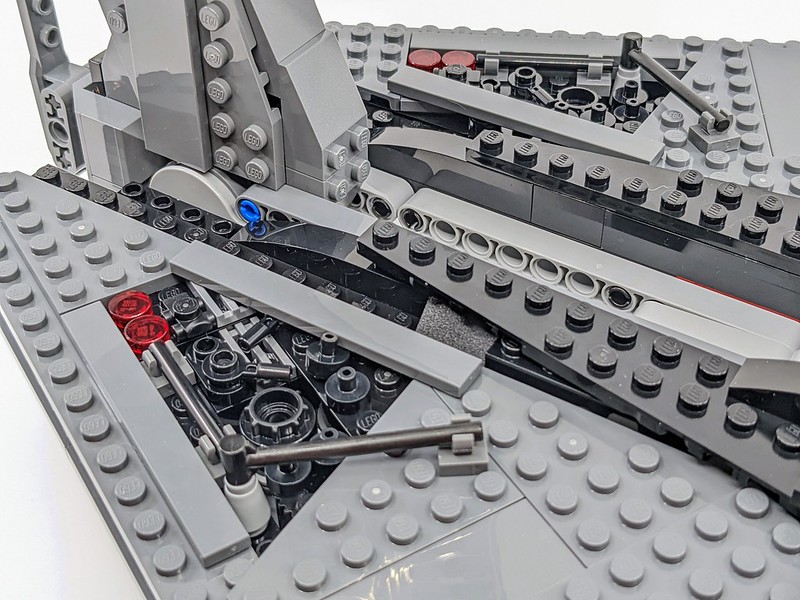 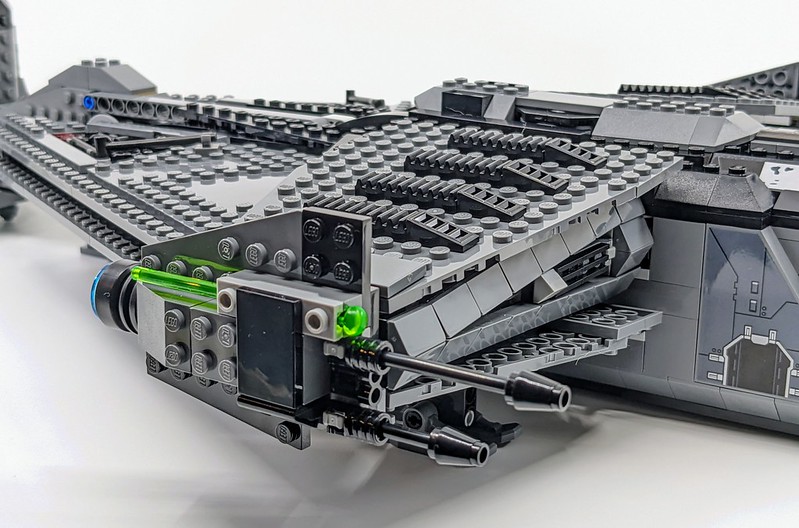 Inside the ship can be accessed by removing a small section of roof covering the cockpit area. This itself is unique as it’s a sort of cube-shaped window, surrounding a single seat inside. The interior is quite small, but there’s enough room for a couple of crates of weapons and a small containment section, where a transparent red wall element does an impressive job doubling as a laser containment shield. Most of the stickers are also found around this part of the build. With a couple of sloped panels on the exterior of the ship featuring stickers along with the transparent panels used for the ship’s windows. In addition to the ship, there’s a small plate which features a trio of Imperial creates and a little trophy-like pot. 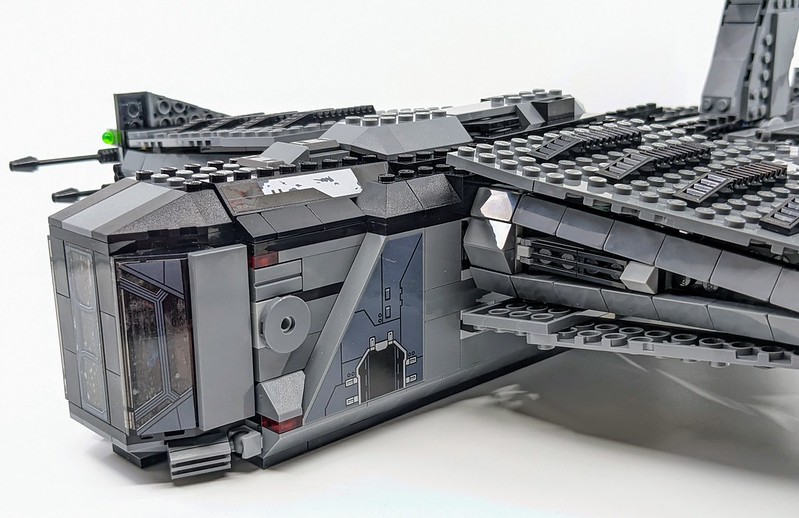 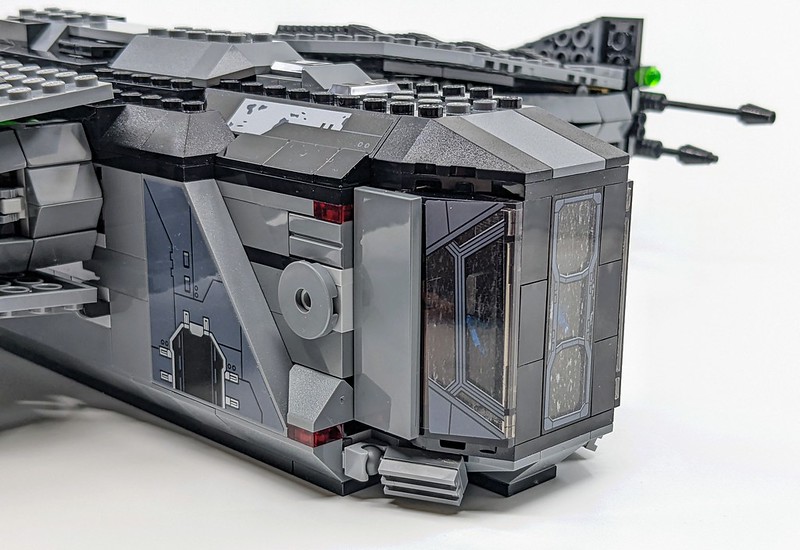 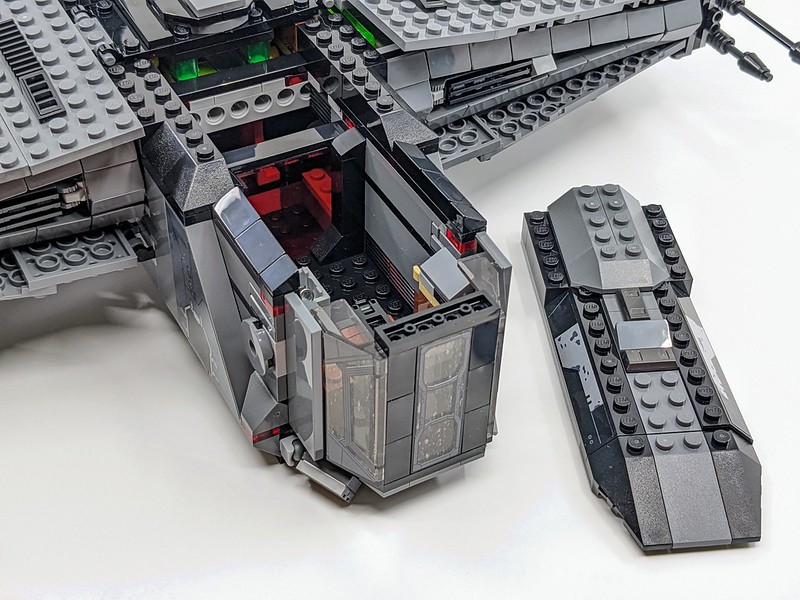 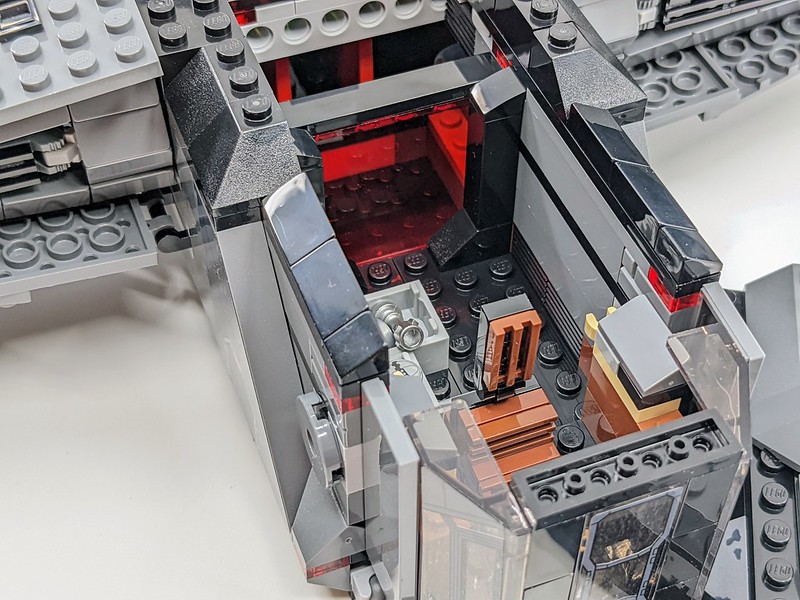 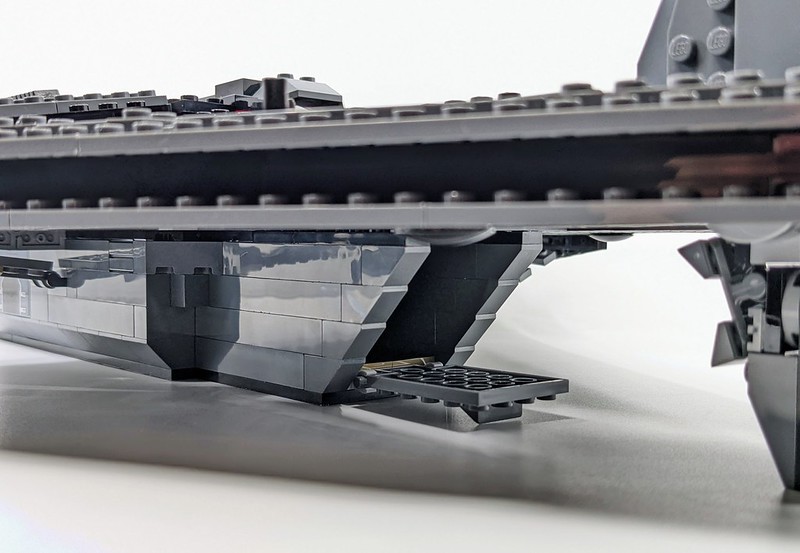 One of the best features of the ship doesn’t become apparent until the very end of the build. You’ll notice a few gears are featured with the wings of the ship. These connect to the large engine section at the rear. This can be moved forward to raise the landing gears in each wing. It also changes the configuration of the ship, with this rear section towering over the rest of the ship when in flight mode. What I really like about this mechanism is how simple it is. There are no complex gear systems in place, just a couple of gears and a couple of Technic beams. Unfortunately, the beams which run between the wings and the tail is visible along the top of the ship. Another interesting feature is a small panel found on the engine tail, it uses a very odd build technique, of plates slotting in-between studs. Not something you see very often in a LEGO set but the resulting design does look great. 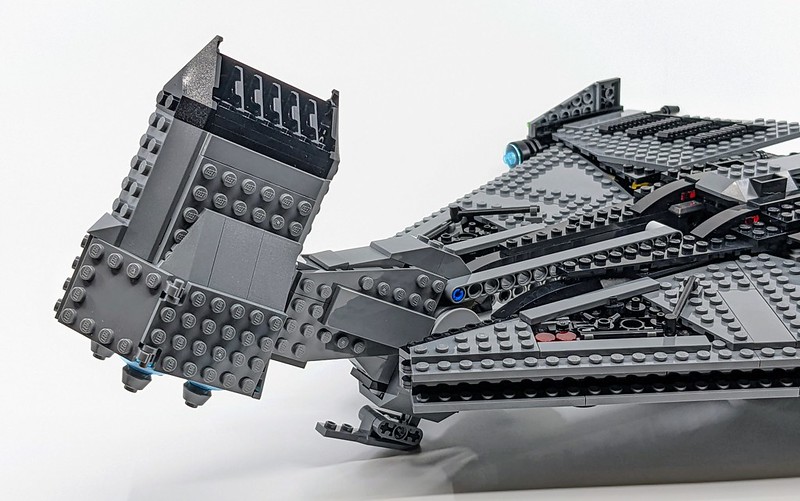 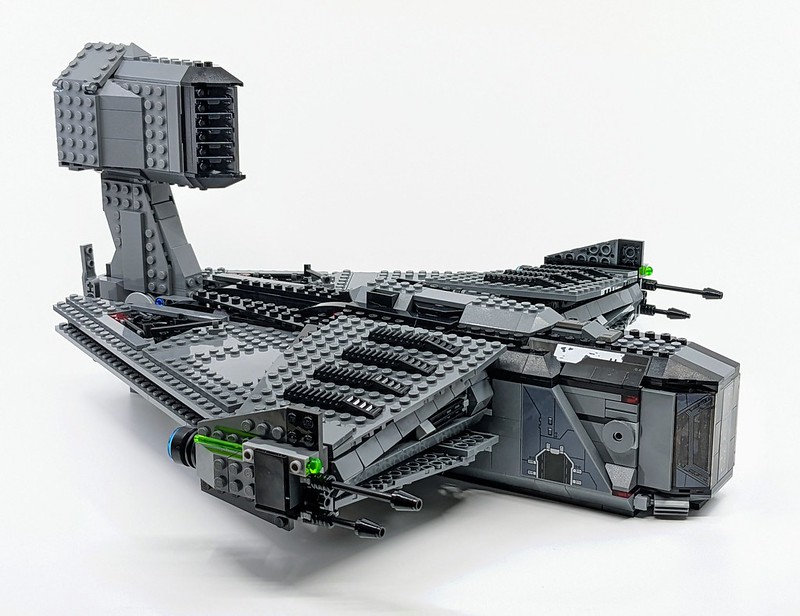 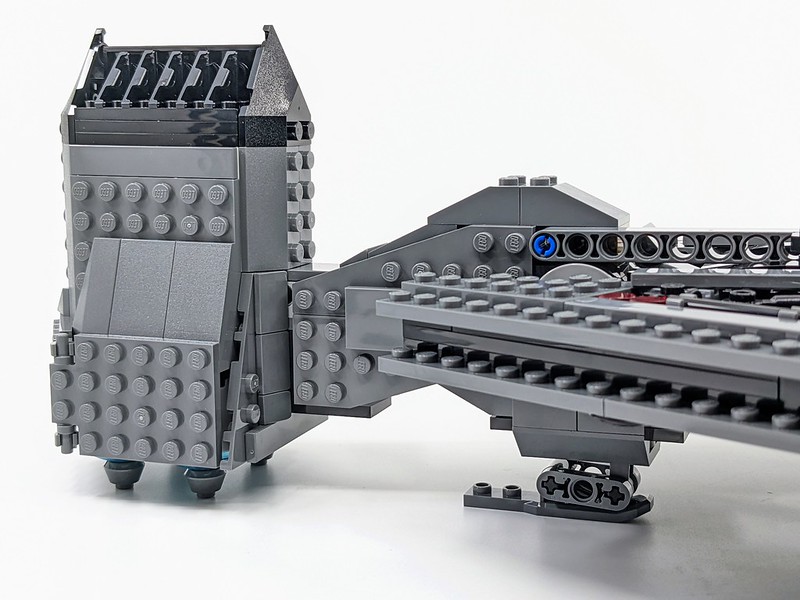 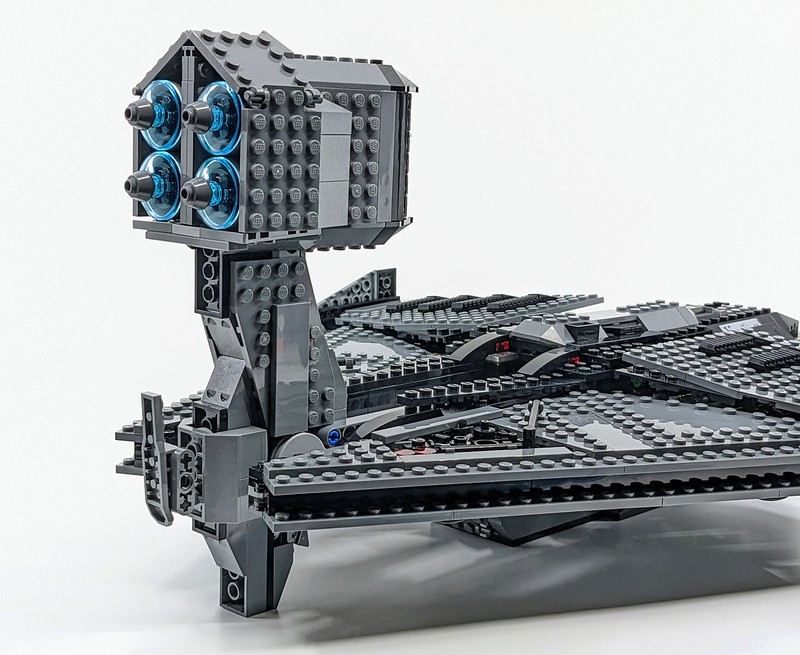 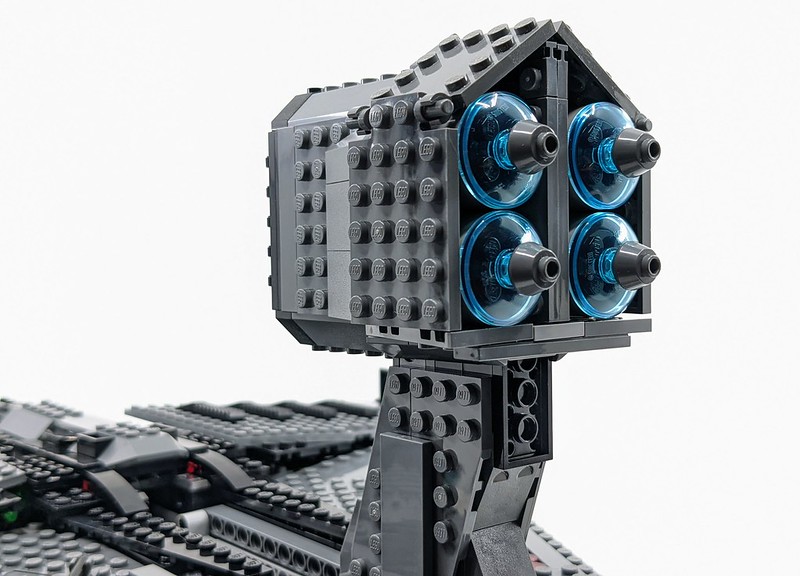 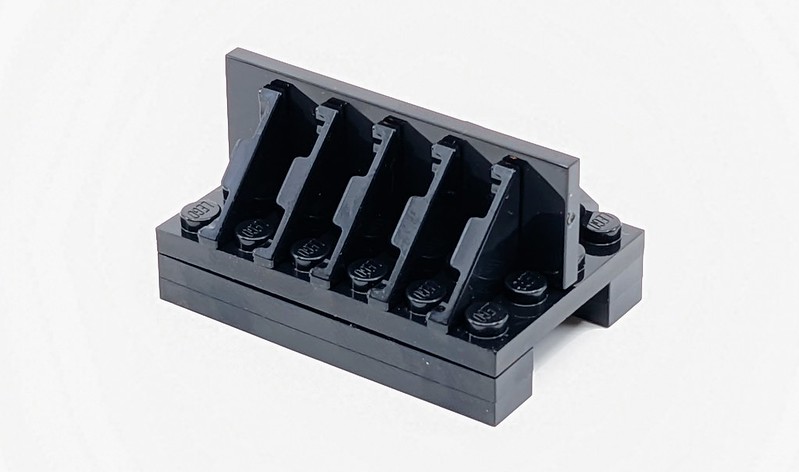 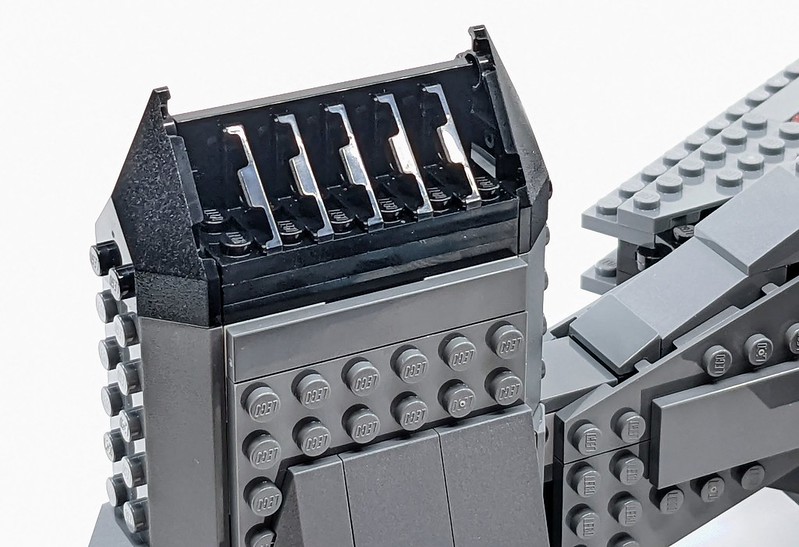 There are five characters included in the set, four minifigures and another new Droid figure. As the set is inspired by The Bad Batch, some of the characters have already appeared in recent sets, namely Hunter and Fennec Shand. Both are exactly the same designs as they appear in other sets such as The Bad Batch Shuttle or the Imperial Light Cruiser. The only notable feature for Fennec is the inclusion of both her helmet and hair, previous sets have offered one or the other.

Cad Bane has appeared as a minifigure previous to this set, but this is an all-new version, with a new hat piece and breather collar. This pairs well with the print detail on the torso and legs as well as the dark blue colouring on Bane’s Duros skin. Bane’s joined by his service Droid sidekick Todo 360. This uses a unique element, which seems to be a new tradition for the Star Wars sets. It’s cool to have these smaller characters portrayed in LEGO form, I’m just not a fan of the gaps found on the rear of the Droid. Making their minifigure debut is Omega. This unaltered clone is technically Boba Fett’s ‘sister’ and was introduced in The Bad Batch animated series as an assistant to the Kamionian cloners. She then joins the rest of The Bad Batch squad in their adventures. Her minifigure is a great likeness to her character, with the clothing matching the style of the character as does the recoloured Harry Potter hair. The dual faces are nice but lack the bejewelled headgear she wears when we first meet her.

It must be tricky being the LEGO Star Wars Design Team. As fans, we seem to moan the most about this popular theme. Unfortunately, the set offers mixed reactions. On one hand, it’s nice to have something new from the theme instead of endless versions of X-Wings, TIE Fighters and the like. But this particular ship, although extremely close to the source material, does feel a little too big. The scale of the set obviously requires a fair few sizable elements and plates, which in turn jack’s up the price point. That being said, I did enjoy the functional aspect of the set, it just needed to be a little smaller and with a slightly better-detailed interior. The included characters are a decent balance between offering something new and being true to the moment featured in the Disney+ series.