Over its forty-plus year history, the key theme of Star Wars is the age-old battle between good and evil. This face-off between the Dark Side of the Force and the light has inspired numerous duels between the Jedi and the Sith. These have also provided inspiration for a number of LEGO® sets. After Rey faced off with Kylo Ren and Obi-wan took the high ground against Anakin, the latest lightsaber duel to be rebuilt by LEGO Star Wars comes from the Clone Wars. During the final season of The Clone Wars a battle raged on Mandalore, as the fractured Mandalorian clans fought for control of the planet, Maul was confronted by Ashoka. This set recreates that duel, so for my next LEGO Star Wars set review, let’s take a look at Duel on Mandalore. 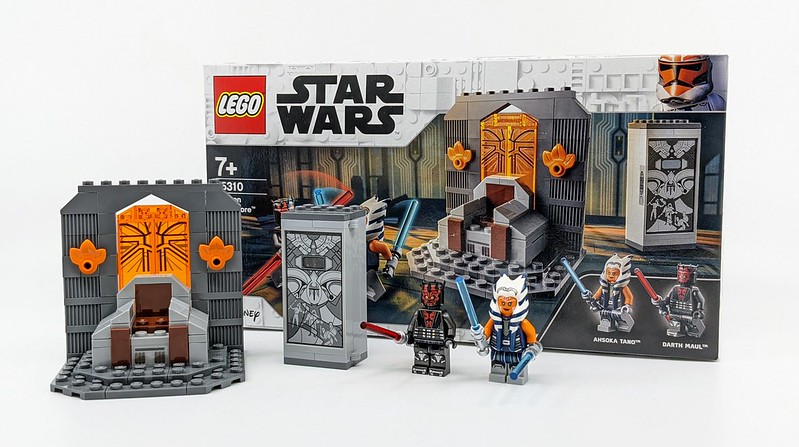 Young fans can reimagine thrilling action from Star Wars: The Clone Wars with this portable Duel on Mandalore buildable playset (75310). It features a LEGO® brick-built throne with a secret drawer containing a blaster pistol, plus a decorative surround including a pop-out window element – ideal for throwing a LEGO minifigure through! Kids will also love the Mandalorian vault for imprisoning Darth Maul.

Exciting battles
The set includes 2 LEGO minifigures: Ahsoka Tano with 2 lightsabers and Darth Maul with a double-bladed lightsaber for action-packed duels. A super gift idea for young Star Wars: The Clone Wars fans, it comes with step-by-step instructions so even LEGO newcomers can enjoy the building experience. 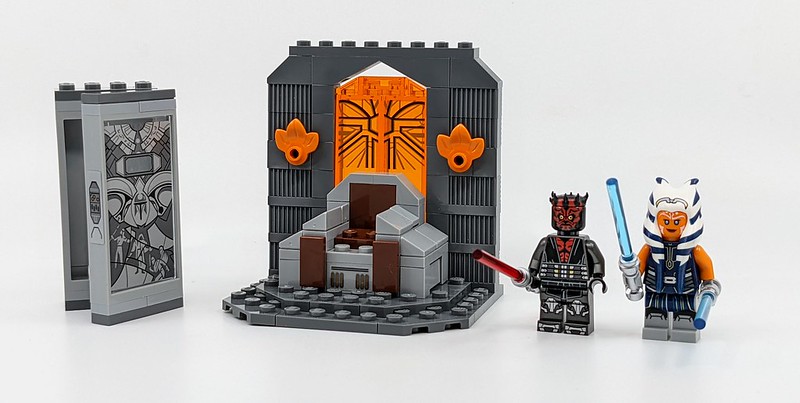 The set features a small buildable throne, a sarcophagus prison and two Minifigures. The sarcophagus is a special containment prison the Mandalorians use to entrap force-sensitive beings. In brick form, it’s basically a couple of door frames with a transparent panel in one of them. This is the surface for a very detailed sticker. This depicts a Mandalorian mural with a small clear window to allow the imprisoned to peek through. 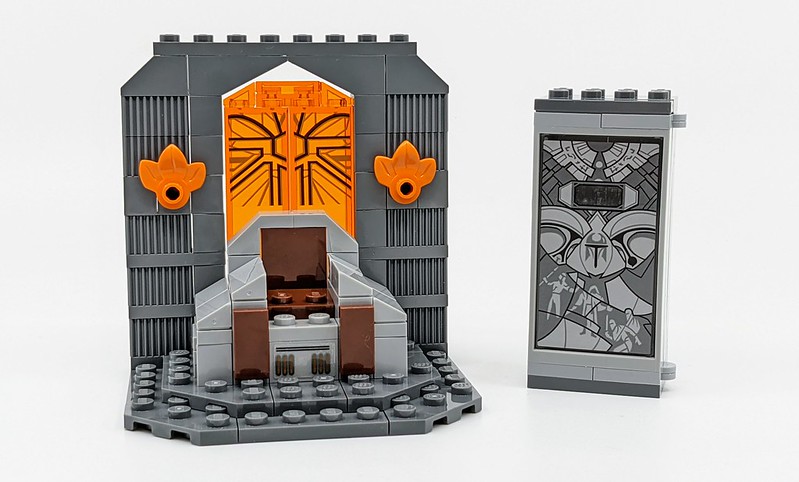 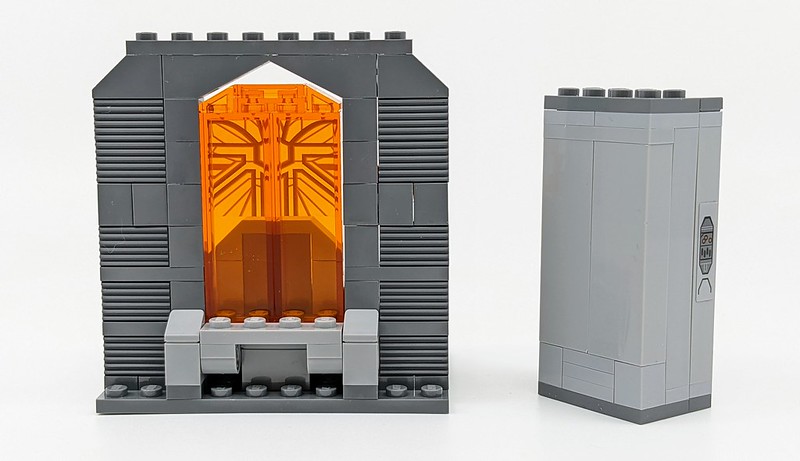 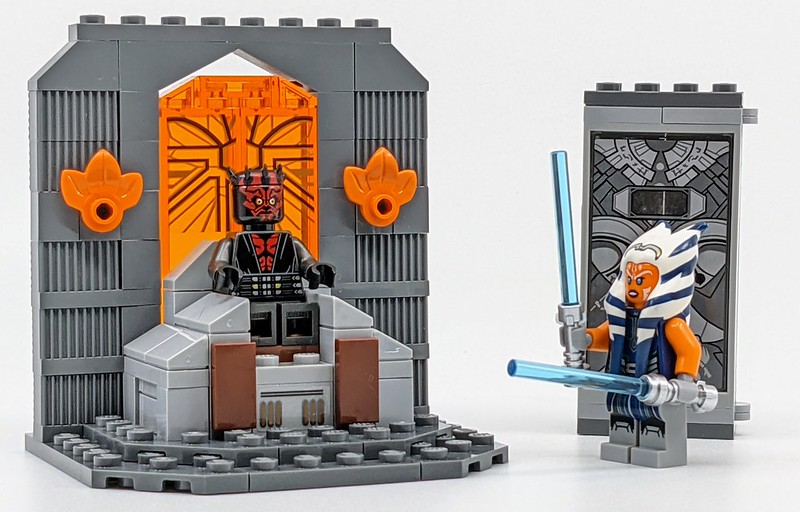 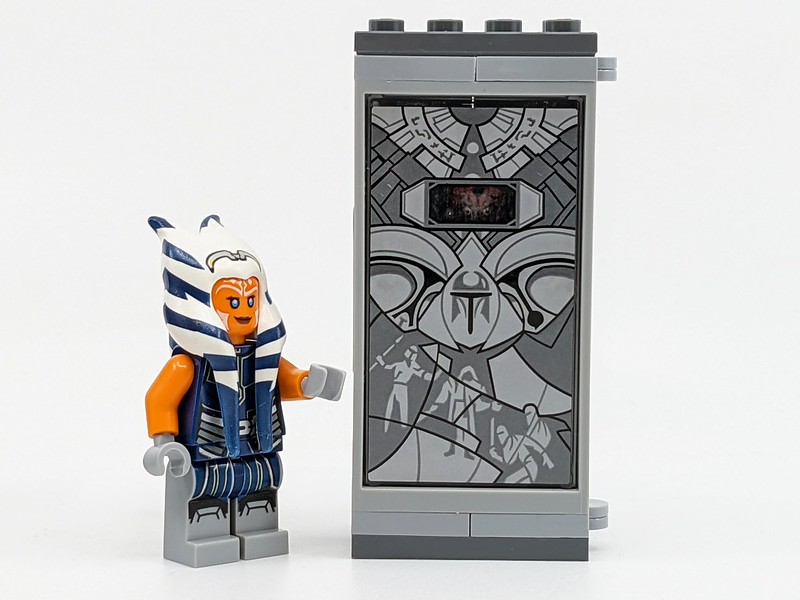 The bulk of the build is focused on the throne and although only a small part of the ornate throne room, it does an extremely good job of capturing the appearance of the special seat. In the episode, which has inspired the set, Maul is forced through a large orange window by Ashoka. The action is replicated by a couple of 1x2x5 transparent orange bricks, with stickers. These are mounted on a hinged plate. Give it a little nudge or launch a Sith Lord through it and it falls backwards. There’s also a hidden draw under the throne seat, this conceals a small blaster. I really like the use of parts on the throne. The textured bricks add some great details as do the orange leaf pieces. 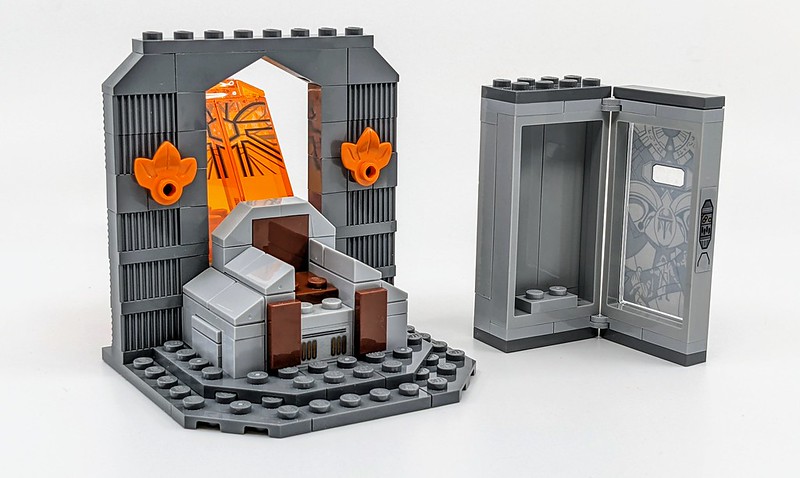 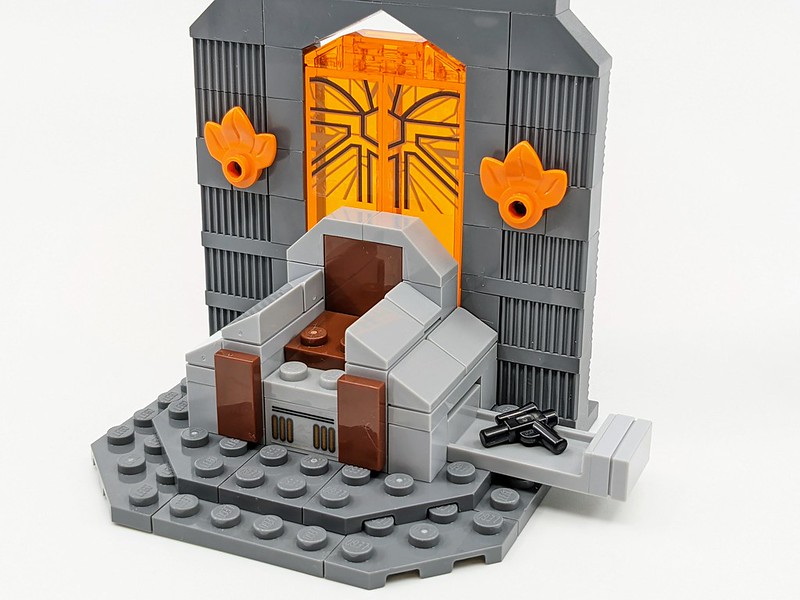 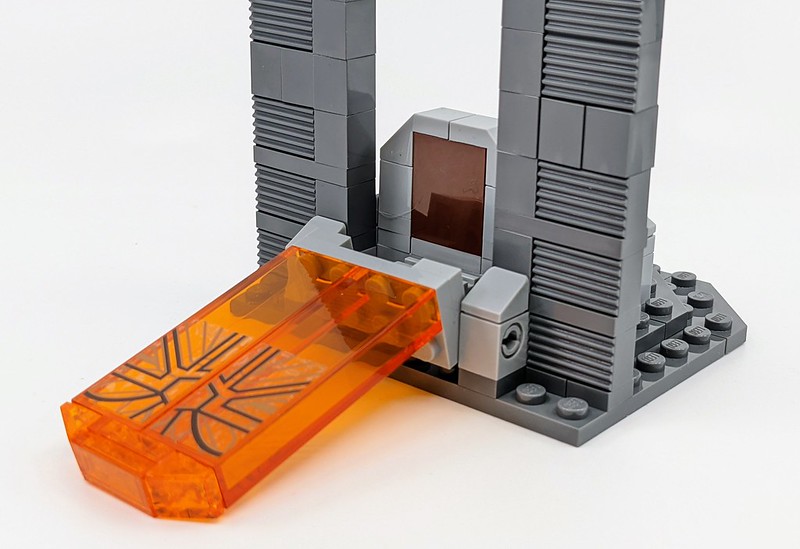 There are only two Minifigures included in the set and those just so happen to be the characters who battle in the throne room of Mandalore as the war rages outside. First up is the headstrong padawan Ahsoka Tano. Despite being a major character in The Clone Wars, she hasn’t really appeared in many sets. Much of her early Minifigure forms have featured the ‘interesting’ wide-eyed look. Her only previous normal Minifigure was released in 2016, we would then need to wait until last year before she reappeared. The version included in this set is the same as the one from last year. She includes her two Lightsabers, which have silver hilts. One thing you may find tricky is getting the head out of the headpiece. Slight pressure on her Togrutas montrals head tails will safely pop the head element out. 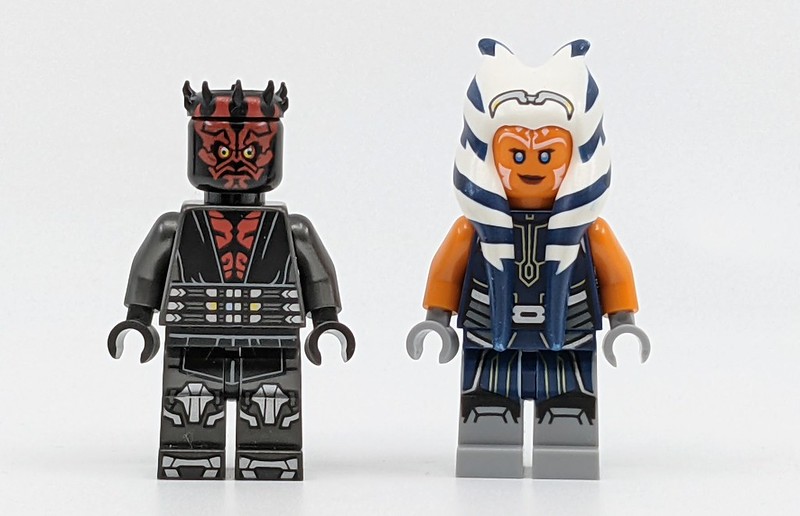 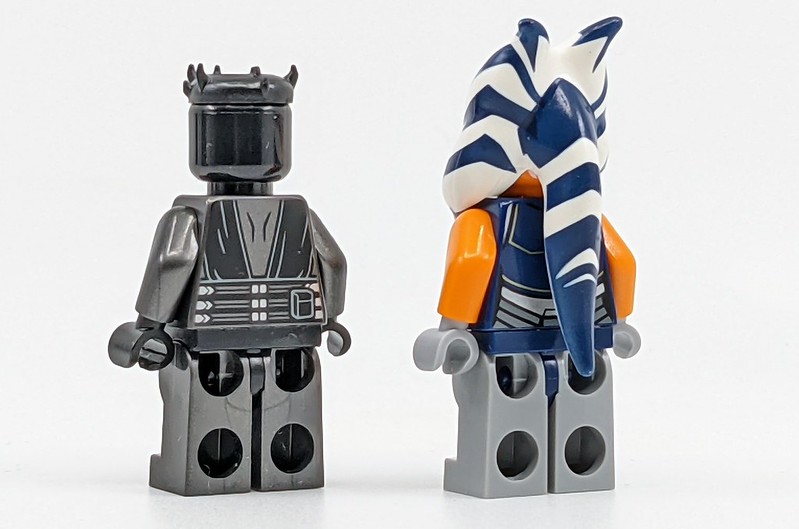 Darth Maul has come a long way during his introduction to the Star Wars universe. After being an apprentice to Darth Sidious and briefly being cut in two. Maul later turned his hand to being a crime lord. This led him to Mandalore where he tried to seize control and lure the Jedi into a trap. With so many strings to his bow, it’s no surprise Maul’s Minifigures have been so varied. The one included in this set is unique and based on his appearance in conclusion to the Clone Wars Disney+ series. His torso includes some nice detail, I especially like the strappy section around his torso. The only bit I’m not a fan of is the face. The expression on the Minifigure looks a little like Maul is trying to remember if he’s left the oven switched on. Maul has his iconic dual-bladed Lightsaber. I wish a dedicated element was created for his hilt. Something similar to Monkie Kid’s staff. 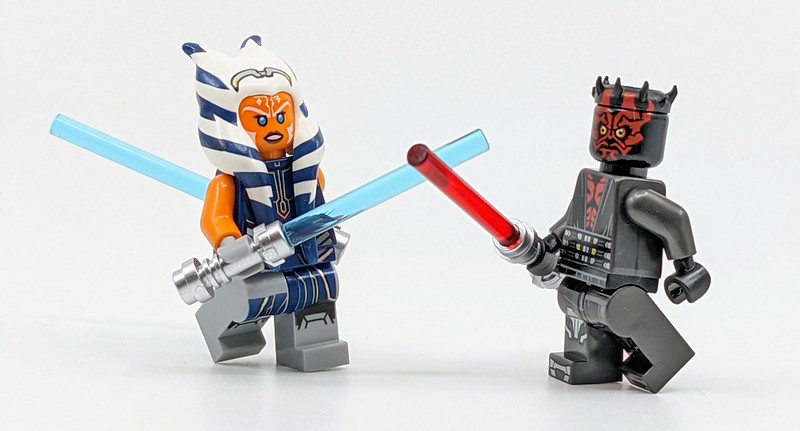 Compared to some of the other ‘duel’ sets this feels a little sparse. But the price kind of reflects that, although it does feel as if it should be a little cheaper than its RRP. It could have easily been expanded into a more substantial set with a higher price point or less detailed with more Minifigures for a battle pack. In its current state, it’s a decent set, although it certainly could be improved upon. Maul needed a more menacing expression and his lightsaber is due for an update, but the rest is pretty spot on compared to the source material. 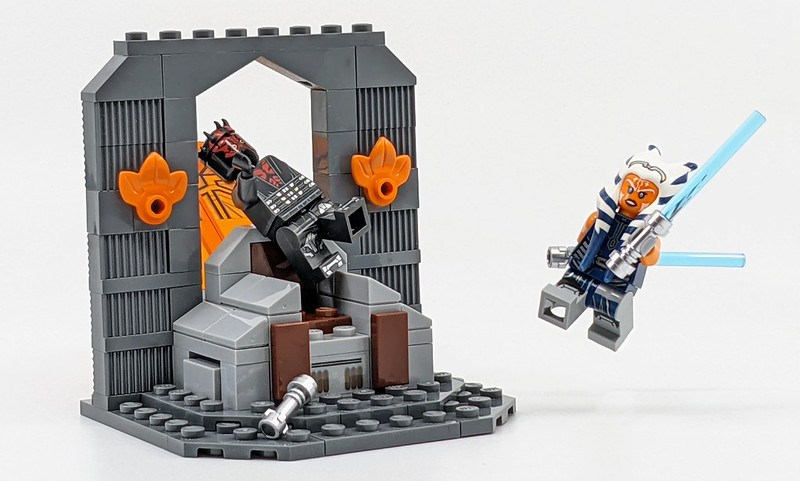