Although Anthony Daniels may tell you otherwise, the plucky little astromech droid first seen in the opening moments of Star Wars back in 1977, is the embodiment of the Star Wars saga. This dome-topped droid has featured in every major Star Wars movie, animated adventures, theme park rides and even the first Disney+ Star Wars series. So who better to celebrate 50 years of Lucasfilm than Artoo. Now, this isn’t the first time R2-D2 has appeared at this scale. Back in 2012, a UCS-type set recreated Artoo as a large-scale set. This new version shares similar traits but vastly improves upon them. Does this update warrant a place in your Star Wars collection? Here’s my review of set 75308: R2-D2. 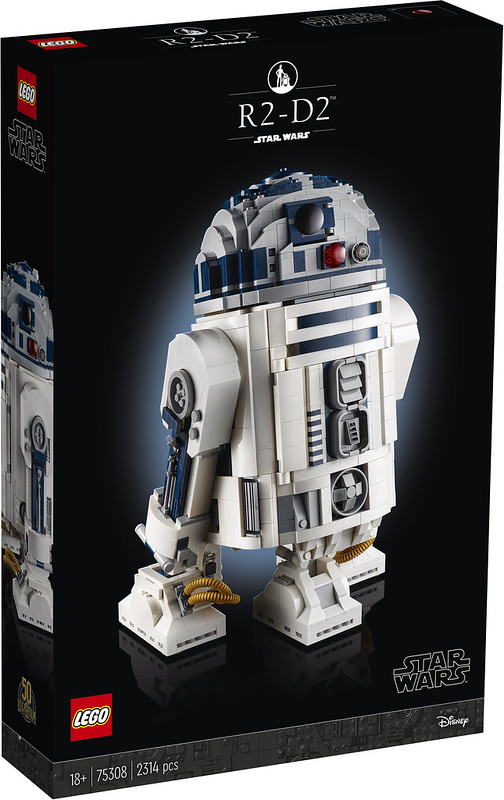 Relive classic Star Wars™ moments as you build this exceptionally detailed R2-D2 LEGO® droid figure. The brilliant new-for-May-2021 design is packed with authentic details, including a retractable mid-leg, rotating head, opening and extendable front hatches, a periscope that can be pulled up and turned, and Luke Skywalker’s lightsaber hidden in a compartment in the head.

Build and display
This cool construction model comes with a buildable display stand, featuring an information plaque, R2-D2 LEGO droid figure and an exclusive Lucasfilm 50th anniversary LEGO brick, to complete an awesome centrepiece for your home or workplace.

Special gift
Part of a premium-quality collection of LEGO Star Wars building kits for adults, this set would make a wonderful gift for yourself, Star Wars fans and advanced LEGO builders. 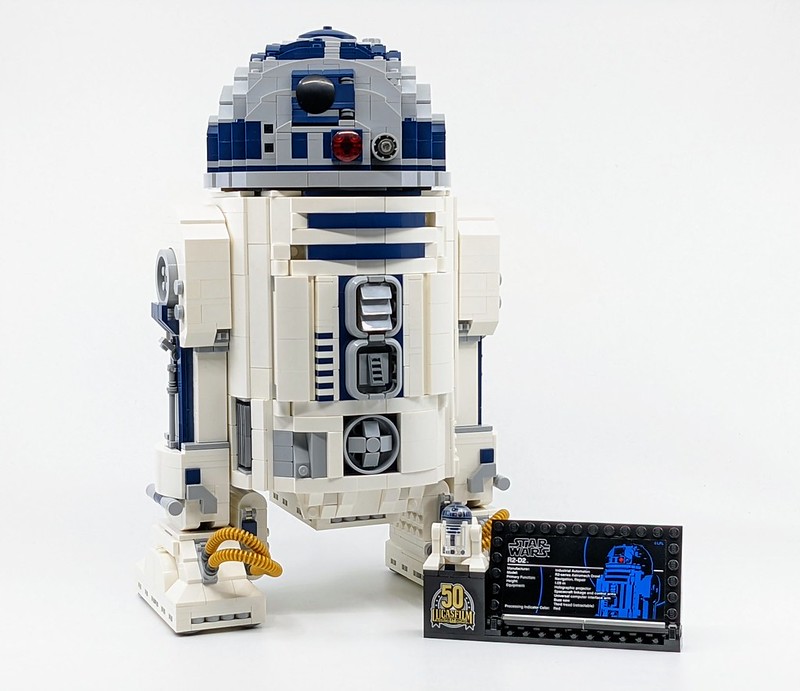 It has been a while since I built the previous LEGO Artoo but from what I can remember the construction of this set is very different. This updated version features newer elements, new functionality and thus a different build experience, one which is certainly geared more towards older builders, which is why it’s part of the 18+ line. This time around the build begins with the insides and expands outwards and upwards. 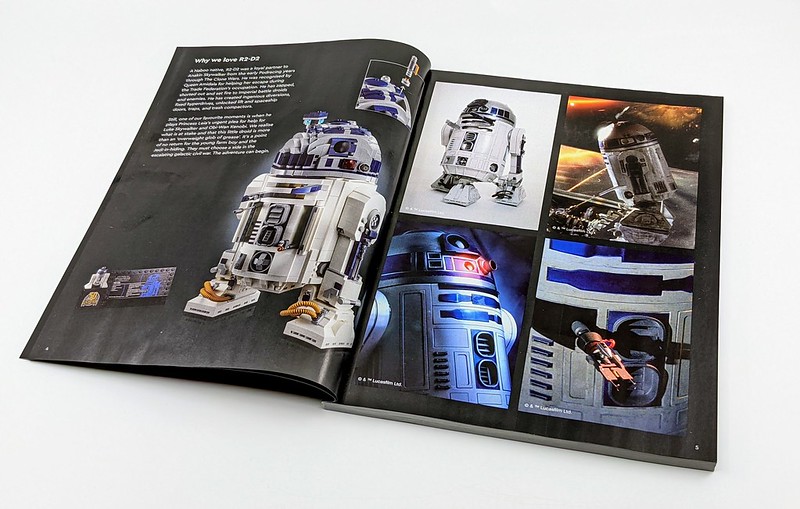 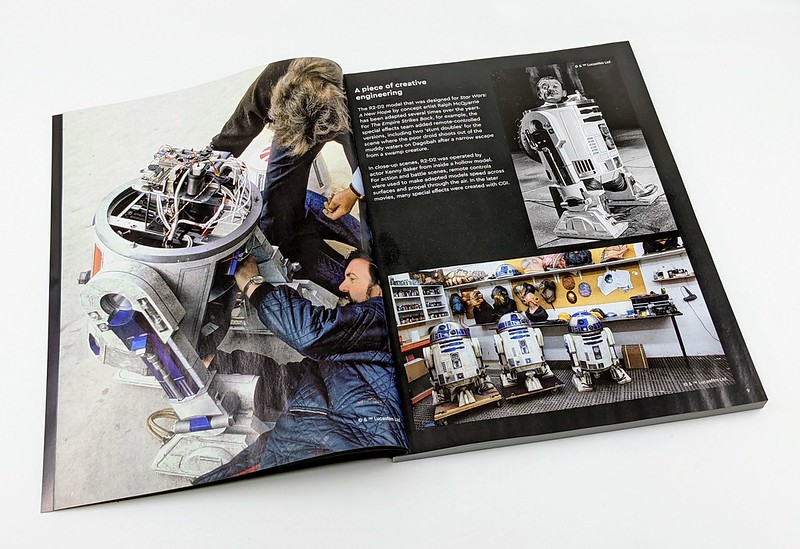 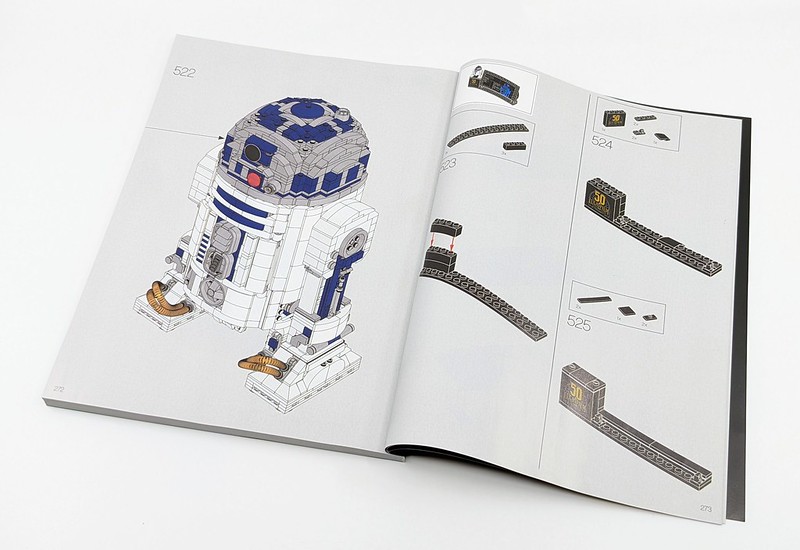 Before I get on to the build, the instruction booklet is worth a mention. Although the set is part of the new 18+ range, it’s one of the first sets to ditch the black background pages in favour of a light grey. This is certainly more easy on the eye. There are also a number of pages dedicated to the R2-D2 prop droid used in a number of Star Wars movies. I do enjoy these inclusions in the instructions. 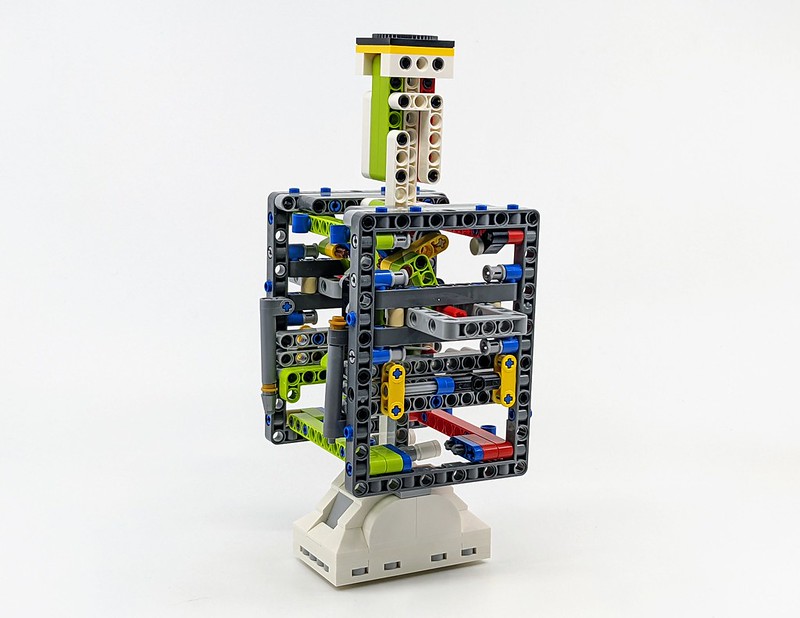 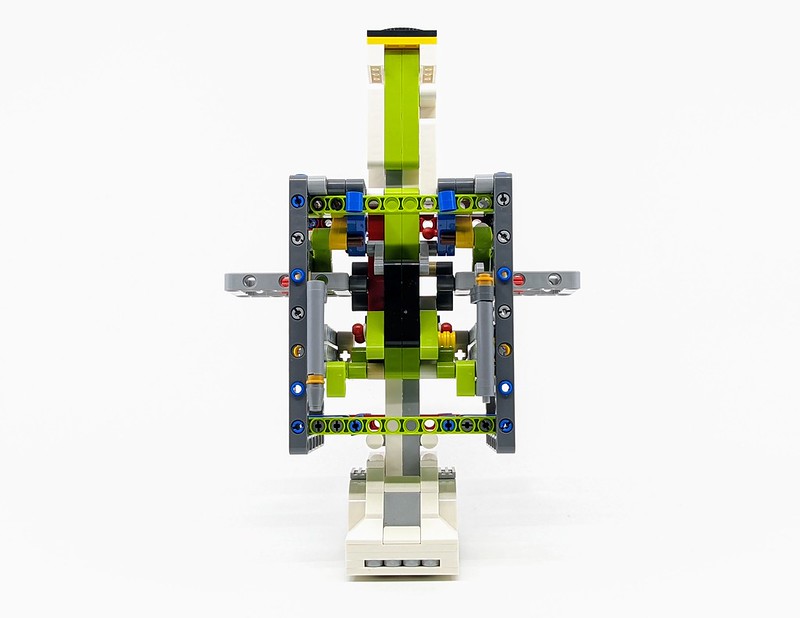 One of the key features of Artoo is a retractable leg, the functionality of this has been greatly improved. A swift motion of lifting Artoo, drops the central tread and tilting the body of the droid, positions Artoo in that iconic traversal mode. That central leg also acts as the core of the build. As you would expect, in order to achieve the various functional elements, this core section is rather complex and features numerous Technic elements. With the leg complete, a sort of cage is then constructed around it, which is where the rest of Artoo’s outer shell is constructed. 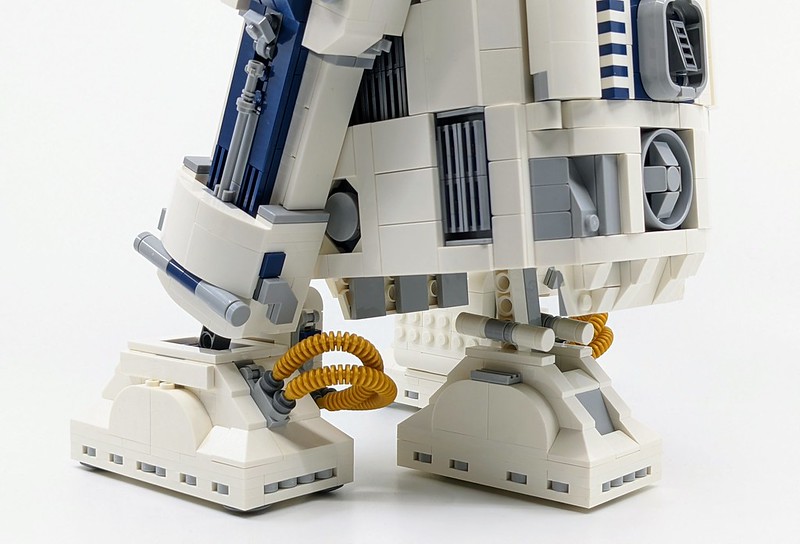 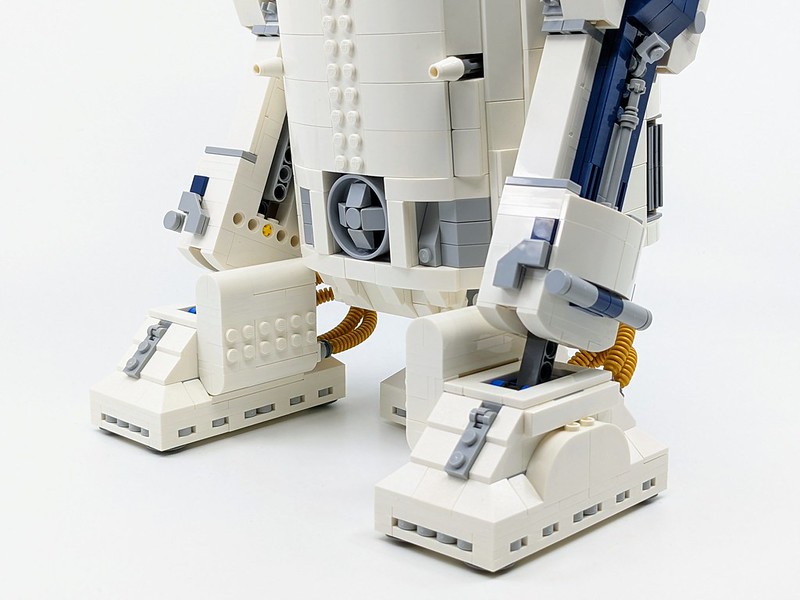 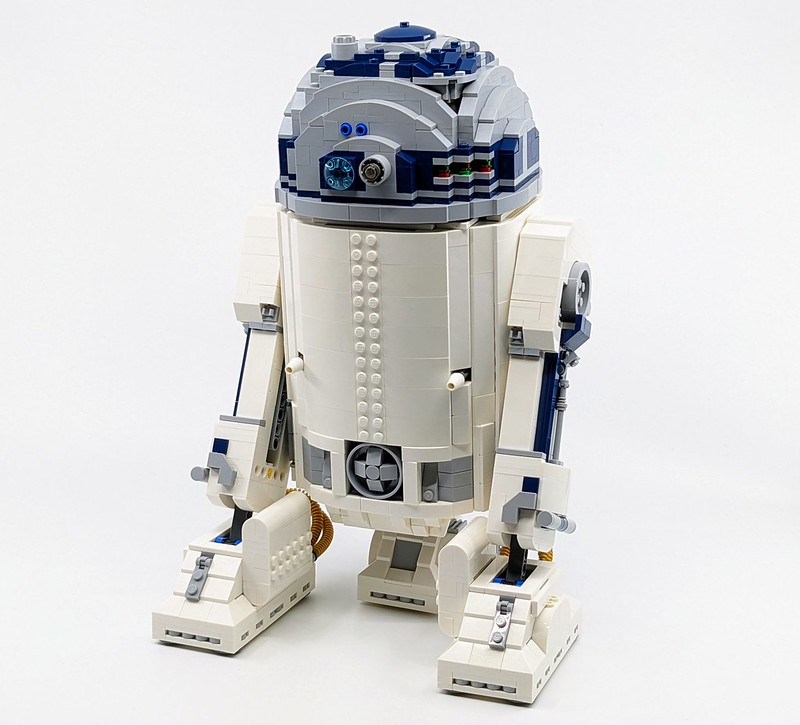 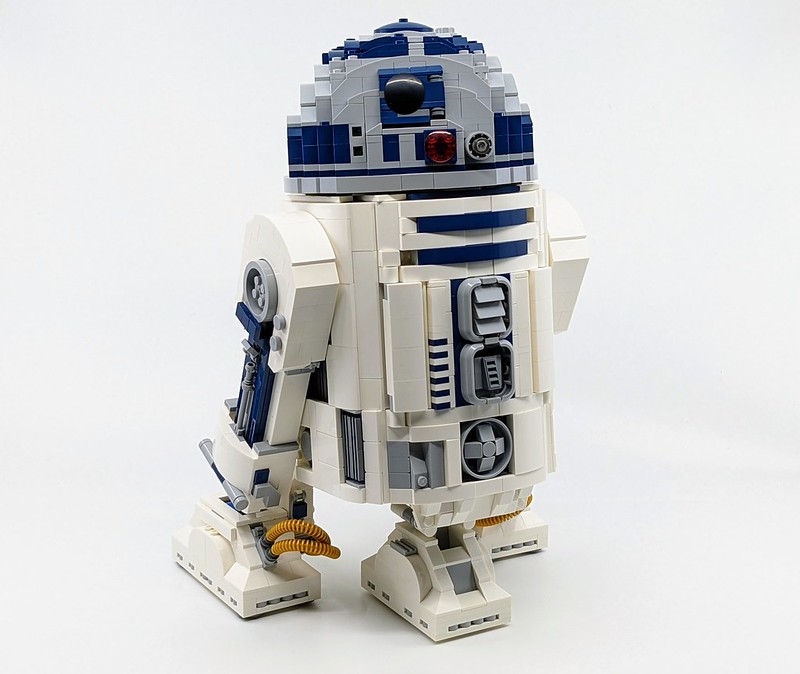 As with the previous R2 model and actual droid, Artoo has a number of important tools, which can be called upon to deal with all sorts of tricky situations. These include two side panels which hide a couple of probe tools. Both of these are accessed via a pair of push levers. Pushing the rods located around the back of Artoo, forces the two flaps on the front to push open, and access to the two tools. I certainly prefer the cutting disc from the original model. There are also two blue panels near the top of the body section, which also house little tools. These panels are simply accessible by pulling them open. 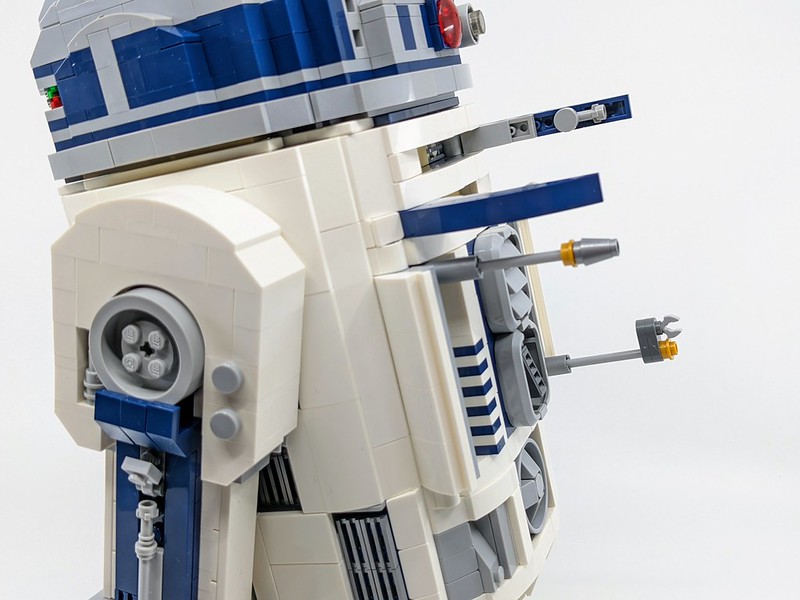 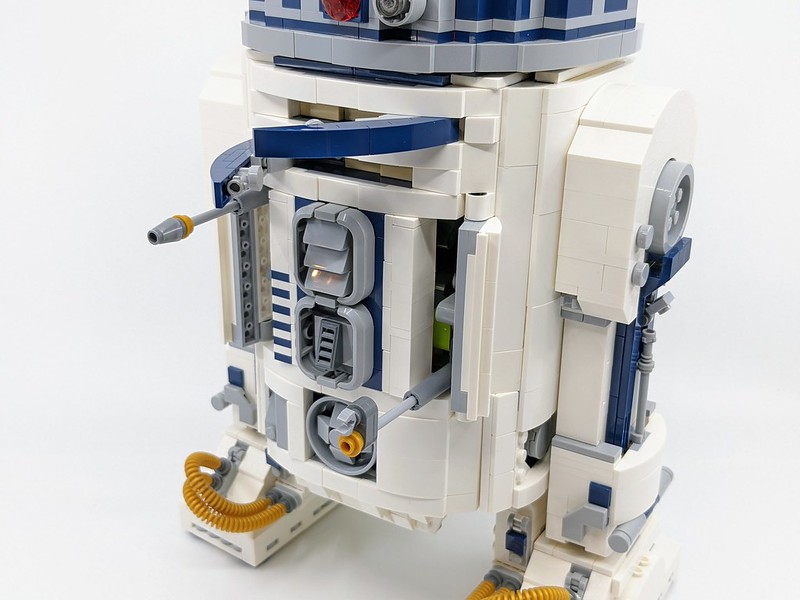 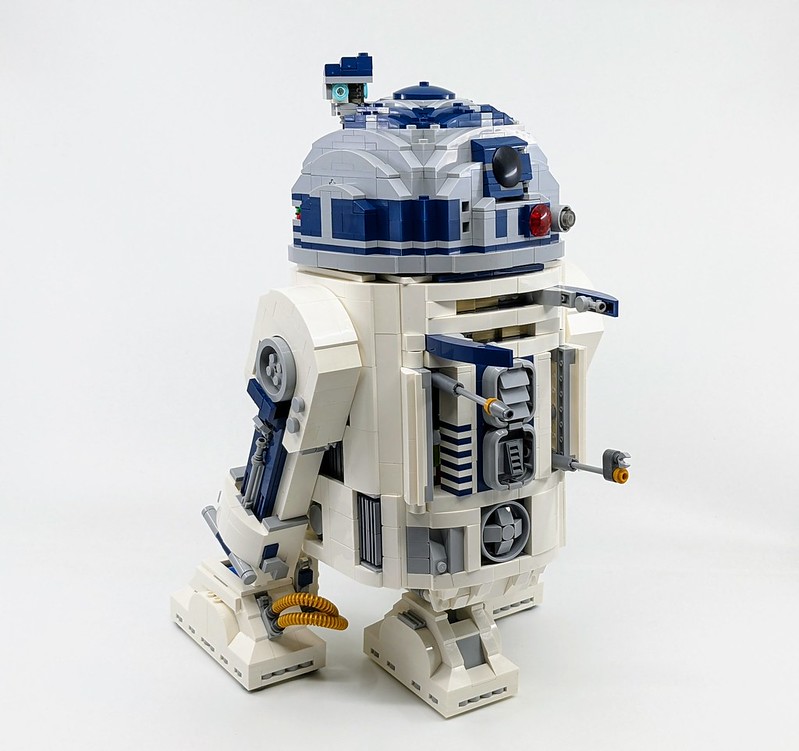 One section of the body which isn’t as defined as it could be is the tool panel which runs down the entirety of Artoo’s front. Although this is built a little more robustly, it protrudes out rather too much and isn’t as flush to the body as the previous model achieved. I do prefer how the Power Coupling port is done this time around. 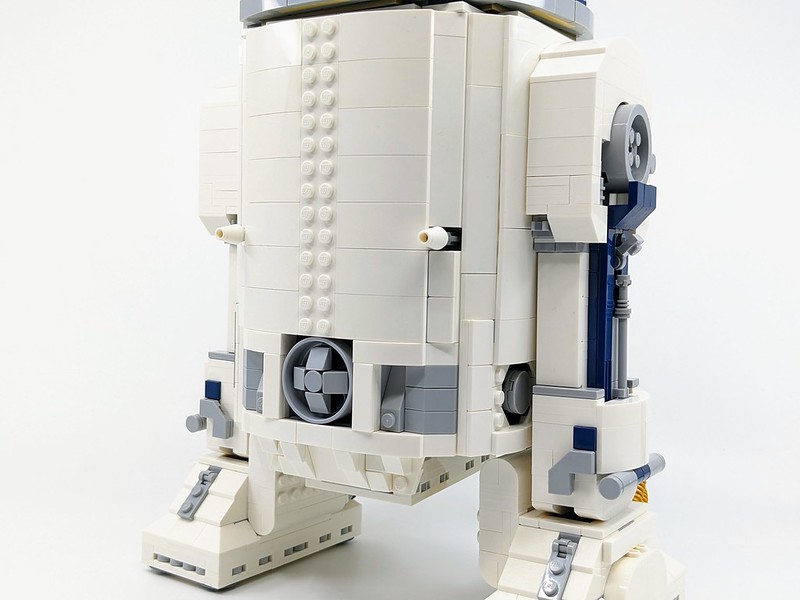 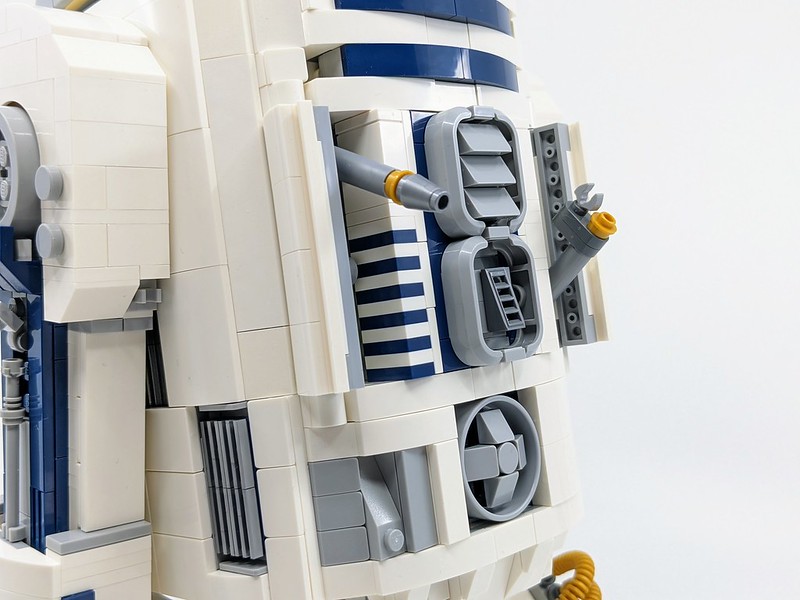 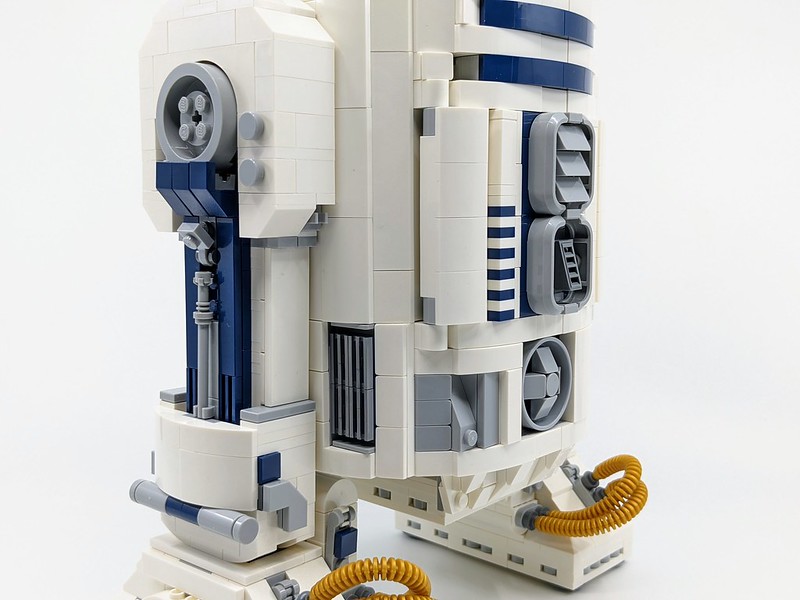 The two main legs have an extremely similar build to the 2012 set. Although they play a bigger role in the central leg function. Despite the similar build, the legs do have a few design tweaks. For example, the piping is a different colour and the tiny detailing deep set around the trim of the legs uses plate tiles in place of studs. 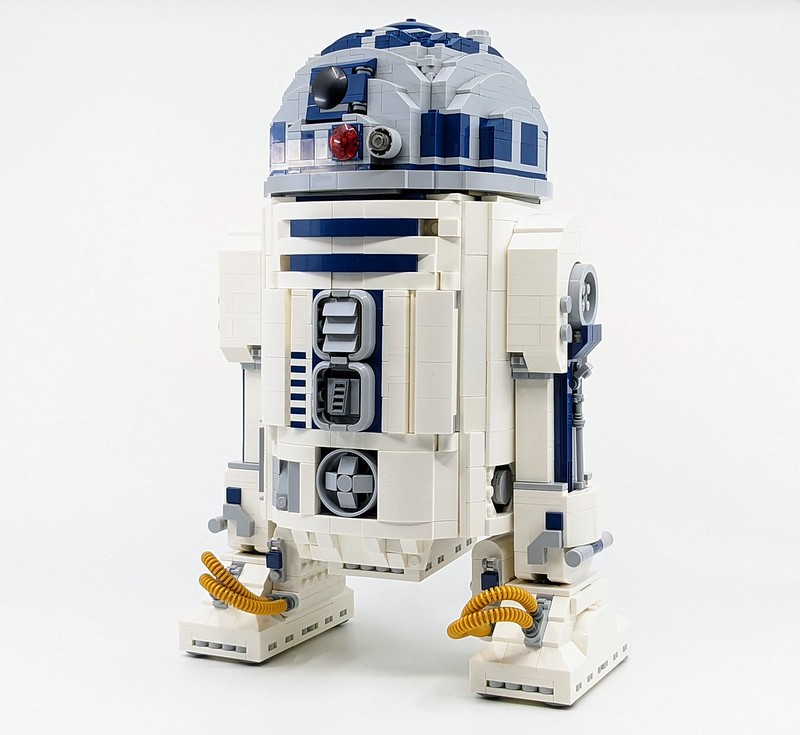 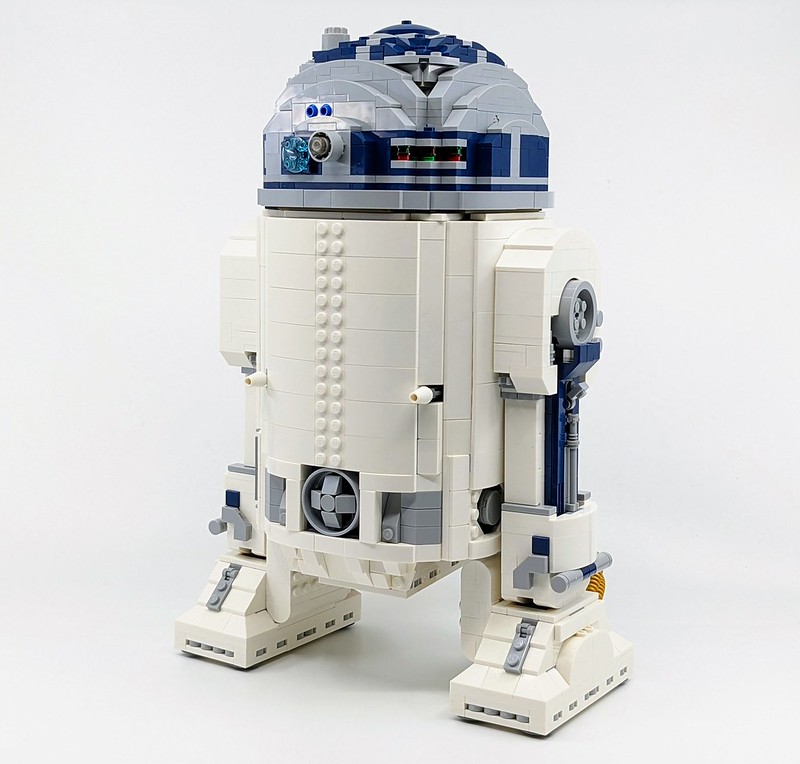 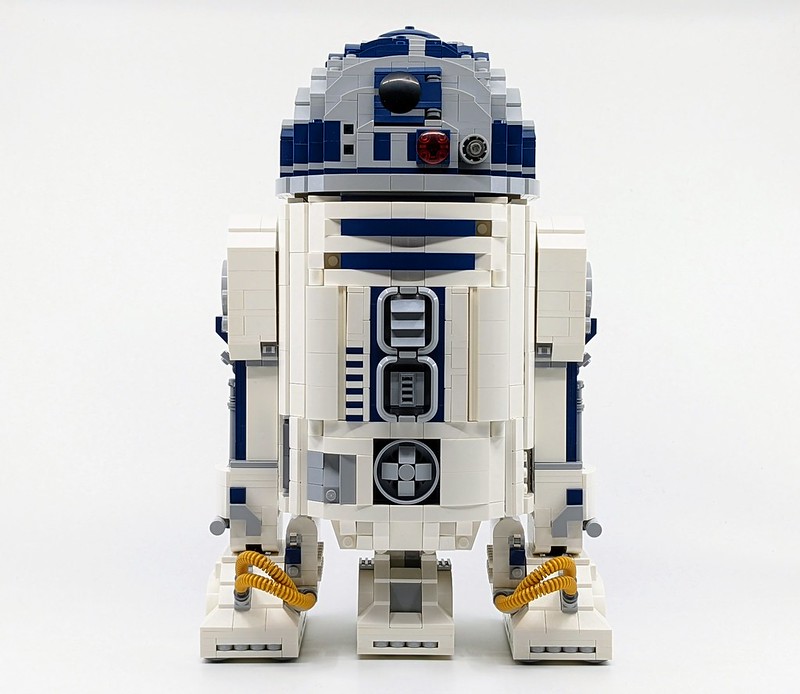 Once the two main legs struts are connected to the body, you’ll be able to test out the main functional aspect of the build. As mentioned above you lift the main body, which causes the central leg to drop. Tilting the body back achieves that all too familiar stance Artoo has when moving around. The action of dropping the leg and kicking it out is definitely much better than the original set and almost feels like flicking out a bike stand. 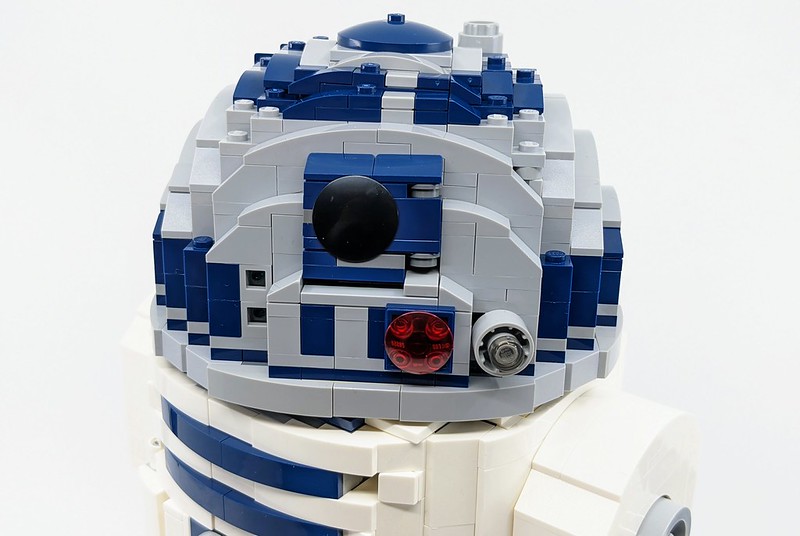 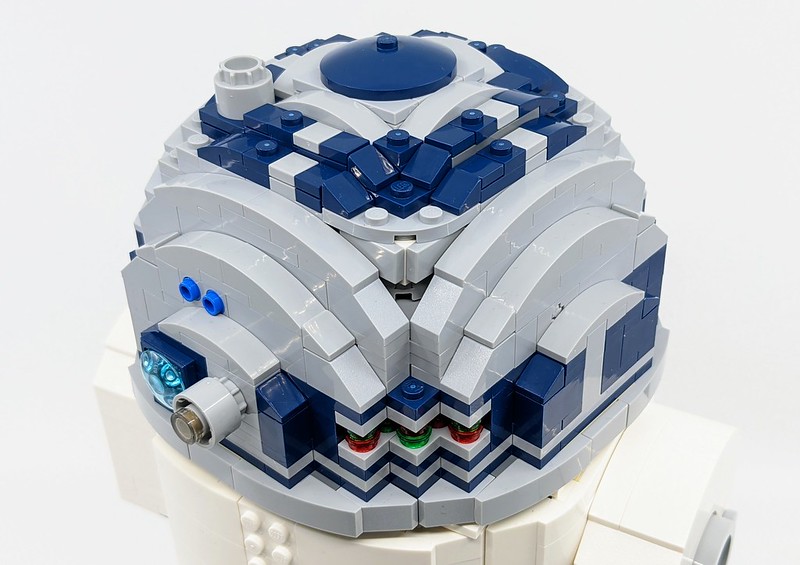 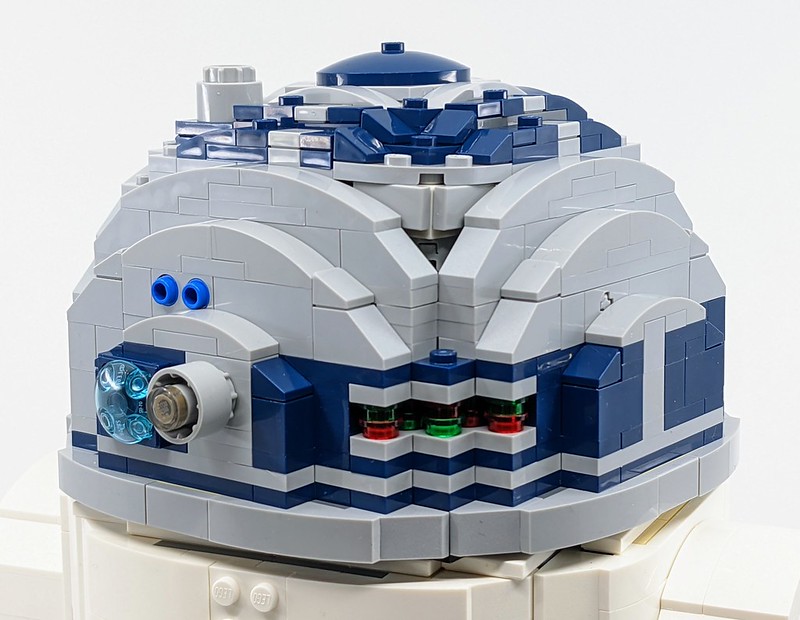 The key feature of Artoo and in fact all Astromech droids is the domed ‘head’. Overall it’s a vast improvement on the 2012 version, which features a studded surface. The use of bow plates results in a much smoother dome, with far fewer studs on show. As well as a different style of build, the dome introduces a couple of new features. One is a periscope and the other is a hidden Lightsaber. The periscope can be raised and lodged into place with a Technic clip and gap within the dome. You need to make sure you align the top of this correctly or it doesn’t sit flush with the rest of the dome.  Despite some others claiming the Lightsaber can be ejected from within Artoo, as it did in Return of the Jedi, the implementation is a little less exciting. You simply remove a small section of the dome and you’ll find a mini Lightsaber hidden there. The whole dome can be rotated 360° although I found it a little tricky to connect to the central column. 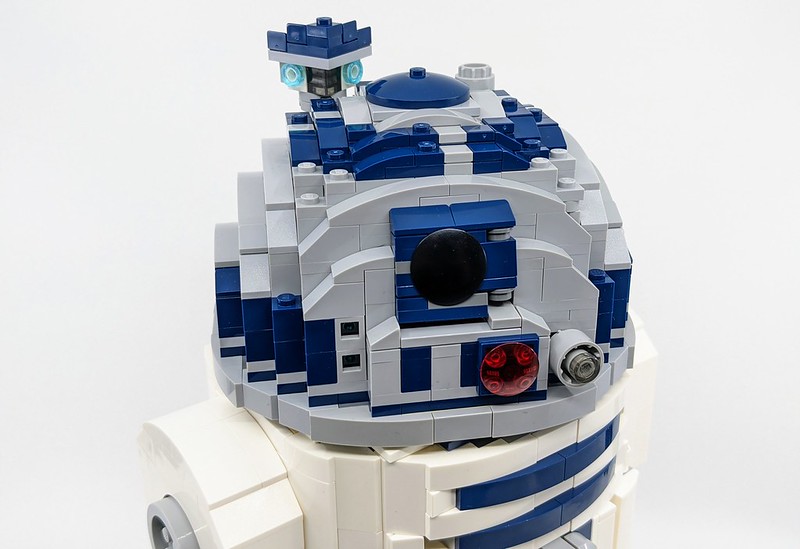 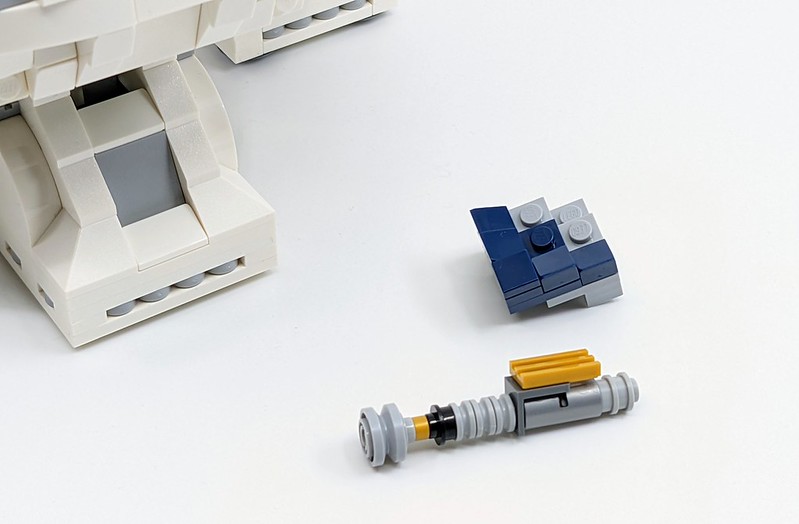 Finally, the set includes a UCS-style information plate. This stickered section includes a little info on Artoo and also acts as a perch for an R2-D2 Minifigure, which isn’t exclusive or new in any way and no there still isn’t any print detail on the back. This section also includes a very special printed brick, which features the Lucasfilm 50th anniversary logo. This brick will not be available in any other sets. 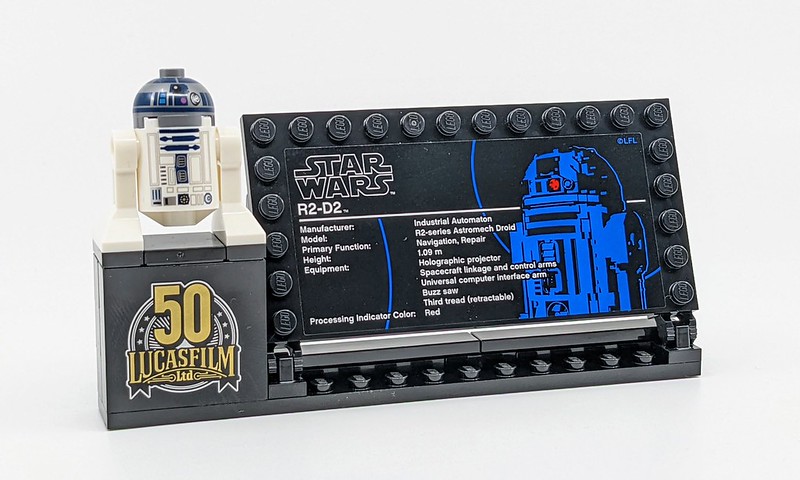 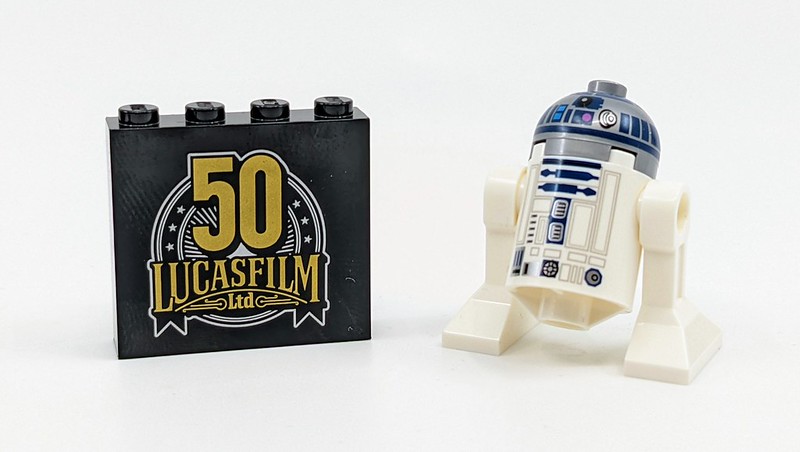 I’m lucky enough to own the original R2-D2, I didn’t get it when it was released but picked it up a few months afterwards as I fancied a challenging build. This new version certainly offers a much more in-depth build compared to the original. Comparing the two versions, I definitely prefer this updated Artoo, the new build techniques and elements certainly offer a much better recreation of the plucky little droid. The implementation of the central leg deployment is a vast improvement over the original. As is the dome of the droid, the fewer studs and more smooth surface is a much better finish. Although the periscope section could have been a little more neatly achieved. The same could be said for the vents on the front section. The original version is much better, although I prefer the power coupling on the new version. I also like the use of bow plates on the body section of this new version. These help to give the build a much more rounded look, the 2012 version was a little cubic in places. It may seem a little unfair to compare a new set to one from so many years ago, but the comparison is necessary. Sure there are elements of the 2012 builds that are better than the 2021 build, but overall this new Artoo is a vast improvement. The build is challenging but not to the point it’s frustrating. If you missed out on the original set or even if you own it, I highly recommend this new version.