LEGO® Star Wars has always had a keen adult fan base, in fact for many the theme is what reignited their fascination with LEGO. Although there have been many sets, such as the Ultimate Collectors Series, which lean towards older builders, the new LEGO Star Wars Helmet Collection is firmly aimed at AFOLs. These new high-end LEGO Star Wars collectibles offer detailed, brick-built recreation of iconic Star Wars helmets. That beloved galaxy far, far away is filled with instantly recognisable characters and one became a cult figure from the briefest of first appearances. He would be known as Boba Fett, a faceless, armour-clad gunslinger, with a fondness for disintegration. Much of Fett’s mystery was down to his helmet. Making his bucket the perfect choice to be recreated as part of the LEGO Star Wars Helmet Collection. So let’s take a closer look, as this is the way. 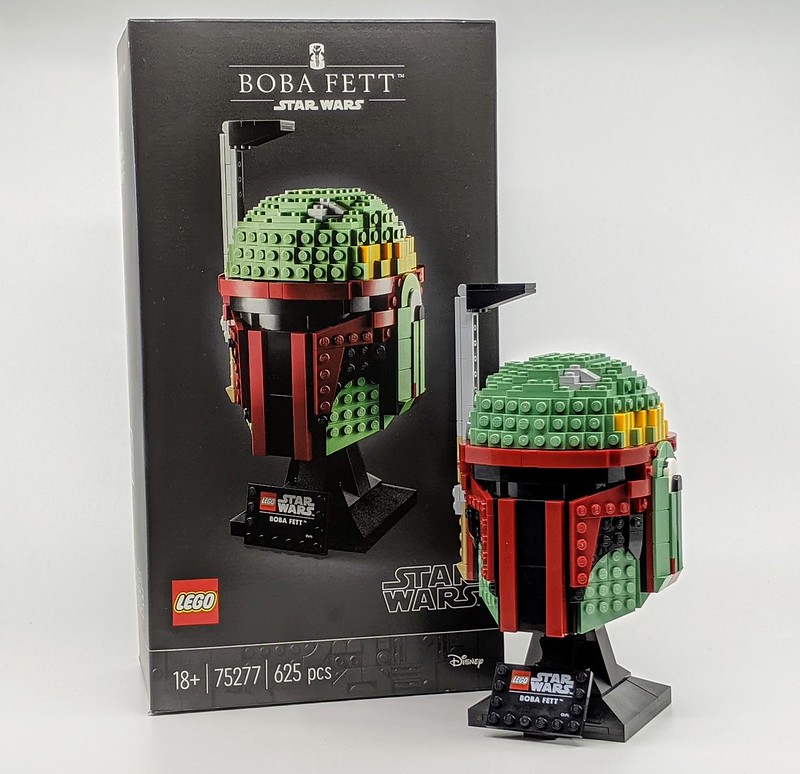 Build and display a LEGO® clone of one of the galaxy’s deadliest bounty hunters with this Boba Fett Helmet (75277) model kit! It’s a super LEGO Star Wars™ gift idea for adult fans and offers a testing challenge for experienced LEGO builders, with the familiar shape and authentic details of the helmet beautifully recreated using LEGO bricks.

Build to display
This LEGO Boba Fett collectible has a base with a nameplate to display it at home, in the office or wherever else you like in the galaxy. For extra building challenges, check out these other new-for-January-2020 LEGO Star Wars Stormtrooper Helmet (75276) model kit. 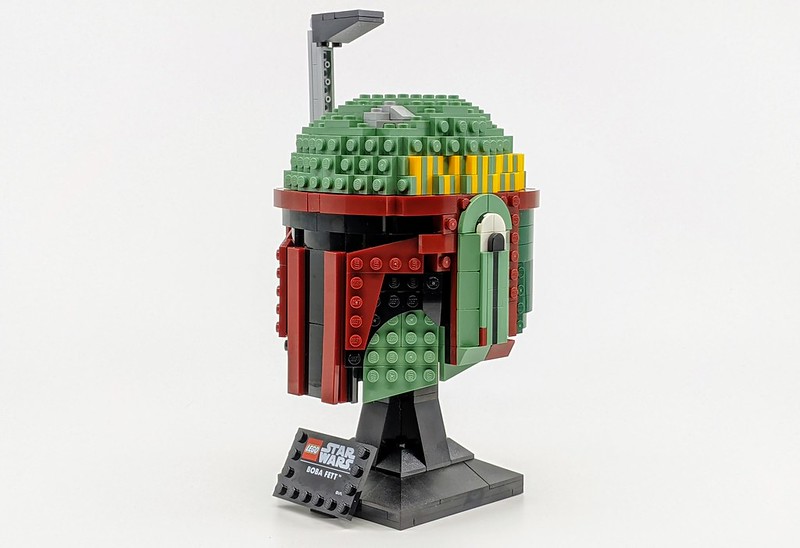 As mentioned above, many of the Star Wars sets are clearly skewed towards adult builders, but the Star Wars Helmets are the first to be aimed towards adults. This is evident from the box, which follows the same design standards as recent UCS sets. There’s a mix of matte and shiny surfaces on the boxes and the instructions feature black pages instead of the more common light blue. Sticking with the packaging, the boxes are surprisingly large considering what they contain but they do look quite cool. 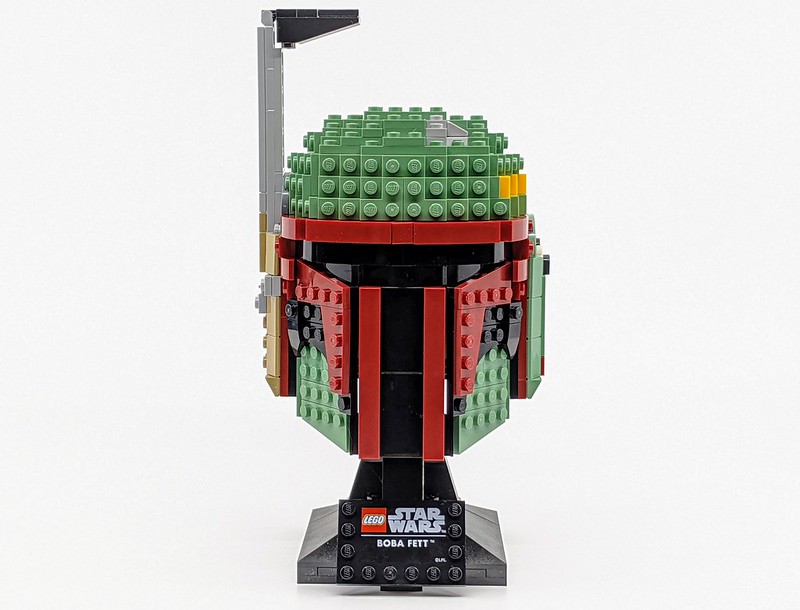 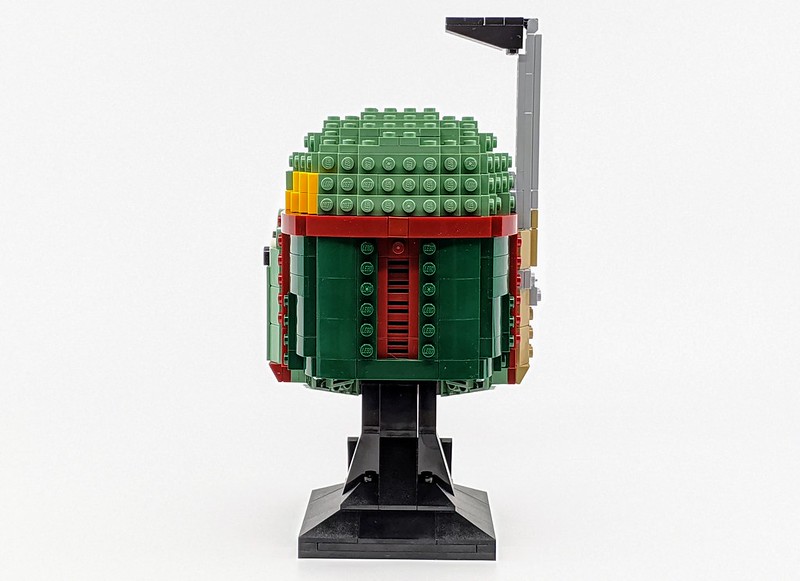 Thankfully the bags of elements are numbered, with this particular set split across five bags. I always prefer staged builds due to the lack of building space. It’s a little tricky to describe the build. Star Wars set normally focused on ships or buildings, a helmet is somewhat different and a little more organic in terms of shape. However, I would best describe it as a far more complex BrickHeadz. So the build beings with the rather colourful inner core of the helmet. This features a fair few side-studded bricks, which becomes the surface on which the outer cladding is added. 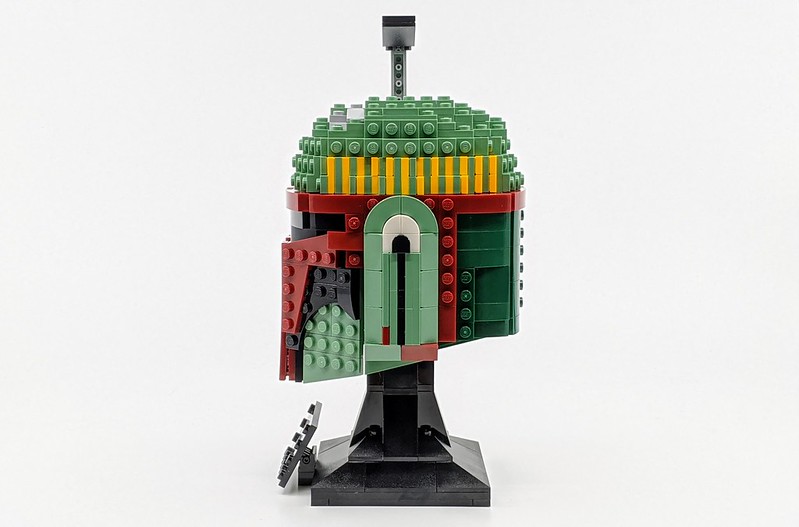 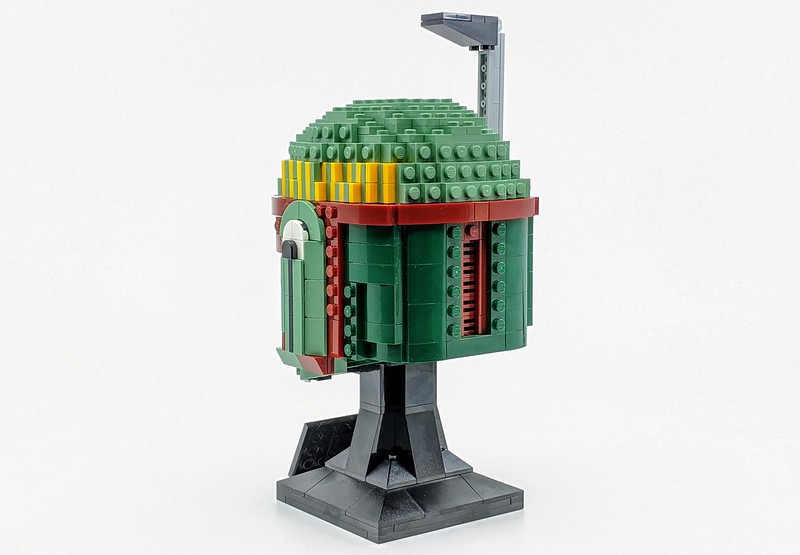 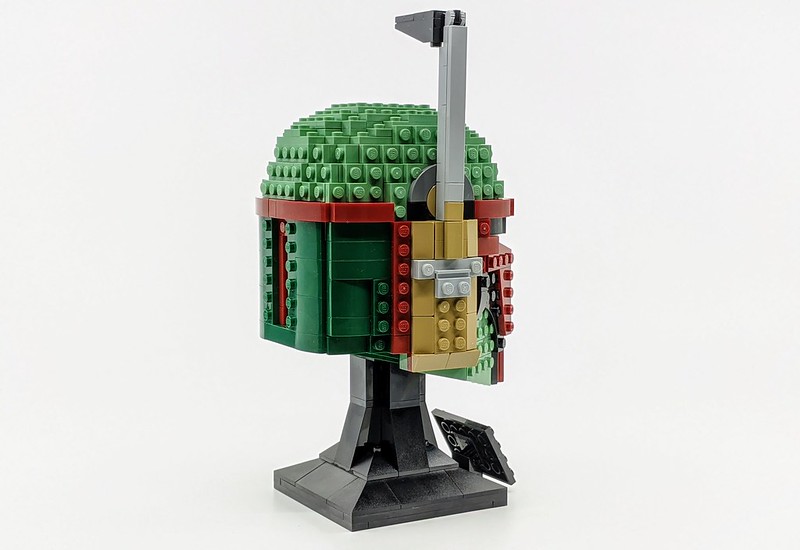 Of the three helmets included in the assumed first wave of sets, Fett’s is the least curvy. But it does include some unique features, which are not easy to achieve with LEGO bricks. On one side the helmet is a strip of yellow and green. Easy to include on the actual helmet, in LEGO it’s cleverly incorporated by a pair of stacked plates, clipped to rod within the core. 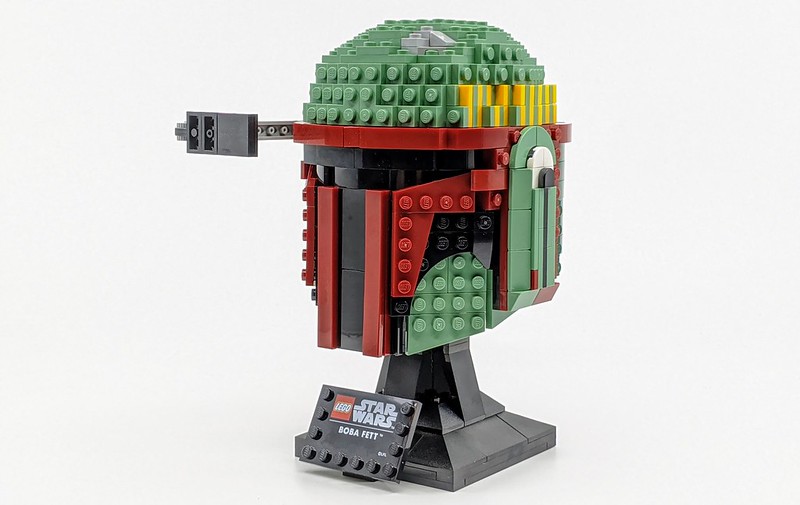 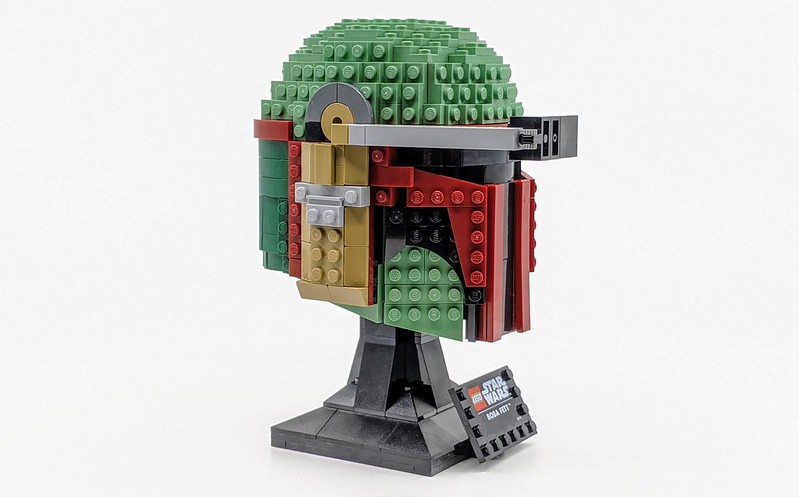 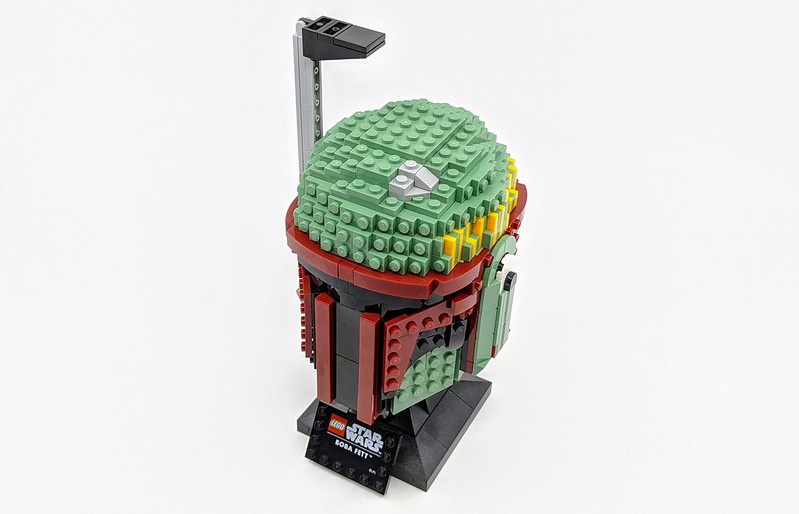 The angled front of the helmet, which frames that famous T visor is also achieved by clipping on plates against a central 4-stud wide section. The unique way each section of the helmet is attached helps to perfectly capture the iconic shape of the Mandalorian’s bucket. This is also helped by the stacked layers of plates on the top of the helmet. A mix of 1×1, 2×2, and 1x2x1 L plates are built up to create a domed curve. Finally, one important aspect of Fett’s helmet is the antenna. This is used as a targeting device and so can be lowered to sweep in front of the visor area. This is simply incorporated thanks to a hinged plate. 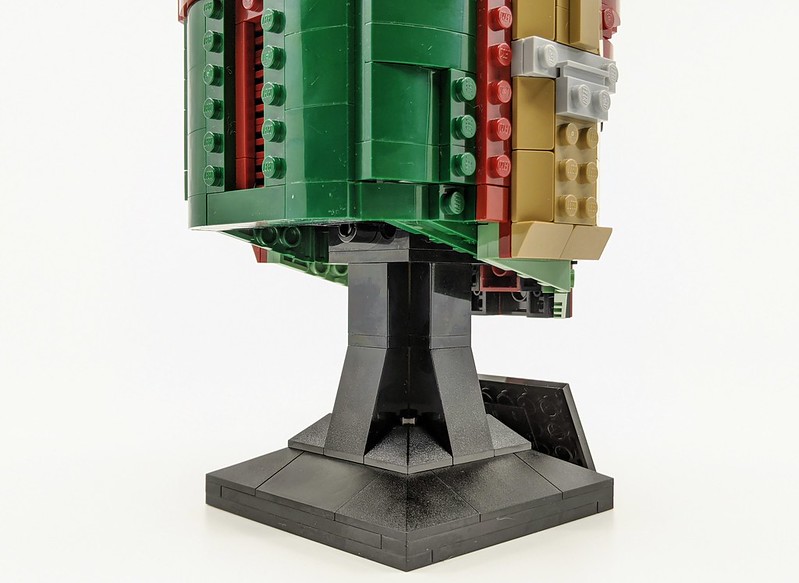 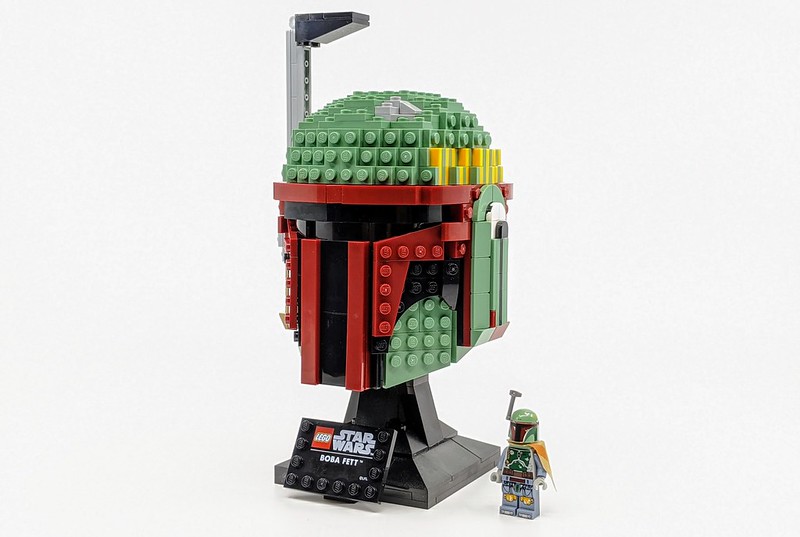 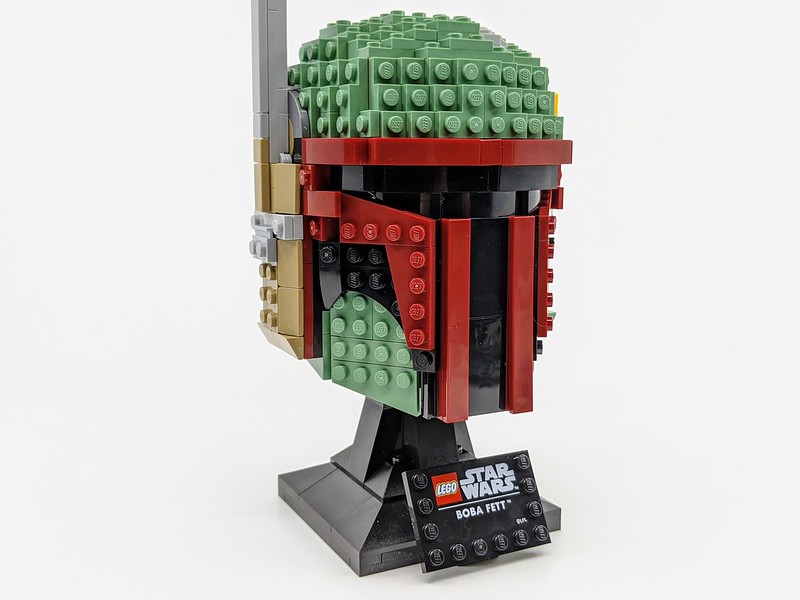 As the helmet has been created to be displayed, it sits atop a black plinth. This is nice and compact, which is perfect for a display piece as it doesn’t take up much room. It also features a printed display plate, which simply features the LEGO Star Wars logo and name of the set. Not only am I glad this is printed, but it also fits nicely with the design of the Ultimate Collectors Series ships. The overall size of the set is perfect in my opinion, I’ve included a Minifigure in one of the images, to give a sense of scale. Which got me thinking – should a Minifigure have also been included? The UCS ships feature a relevant character, alongside the display plate. But I can’t decide if one should be featured with the helmets. Who doesn’t like a Minifigure, but does it dilute the somewhat grown-up aesthetics of finished build? Maybe it would a little.

Although the set wasn’t as complex as an Ultimate Collectors Series set, I highly recommend you fully focus on the build. I foolishly built it in a poorly lit room, whilst watching Clone Wars. This resulted in just one element being placed in the wrong place, which completely threw out the entire build. Something I only discovered on the final stage of the build. However, I love the final result. It looks authentic enough against the costume prop which has inspired it, yet still remains distinctly LEGO. I hope this new range continues with additional helmets, as there are plenty more which will be equally interesting to see transformed into LEGO builds.