For many years Mario’s younger sibling, Luigi, was forever found in his brother’s shadow. That was until 2001, when Luigi inherited a spooky mansion, through a contest he never entered. Luigi’s Mansion was born and finally gave Luigi the limelight. Since the original game launched on the Nintendo GameCube, it has spawned two sequels as well as a remake of the original game. From the moment Mario was transformed into his LEGO form, calls for Luigi to join him soon followed. Once he did, gaming fans soon turned their attention to Luigi’s spooky adventures. And they didn’t have to wait long as a range of Luigi’s Mansion expansion sets were revealed on Halloween. Those sets arrive on January 1st and I’ve had the pleasure of being able to check them out early. The first set I’ll be taking a look at is the Luigi’s Mansion Lab & Poltergust Expansion. 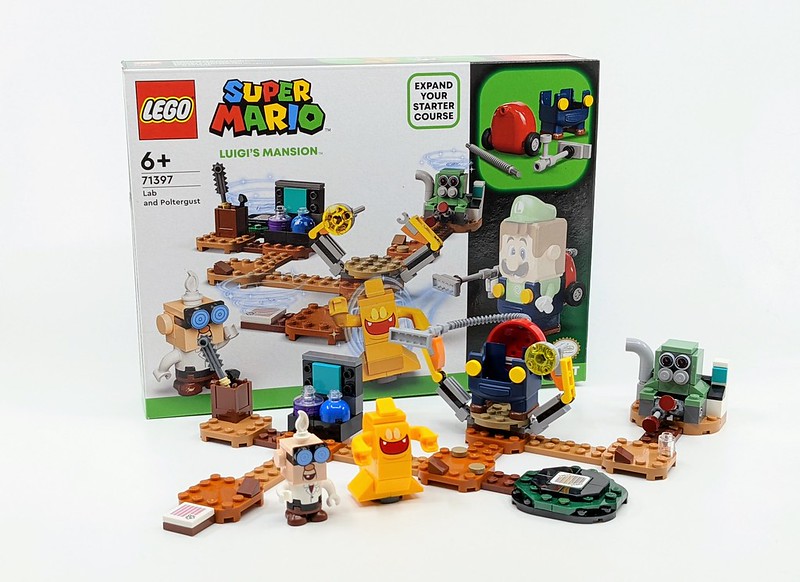 Add ghost-catching fun to the LEGO® Super Mario™ universe with the Luigi’s Mansion™ Lab and Poltergust Expansion Set (71397). This hot gift toy for trendsetting kids aged 6 and up features a Poltergust for LEGO® Luigi™ (figure not included) with a choice of normal nozzle or Strobulb to attach to it, plus a start plate and a lab machine offering digital coin rewards. Press the button to activate the Poltergust to defeat the enemy Gold Ghost figure. (Note: the 71387 or 71360 Starter Course is required for interactive play.)

Meet the Professor
The set also includes a Professor E. Gadd LEGO figure, buildable poison and antidote potions, and a toolbox. Find building instructions, plus inspiration for fun, creative ways to build and play, on the LEGO Super Mario app. 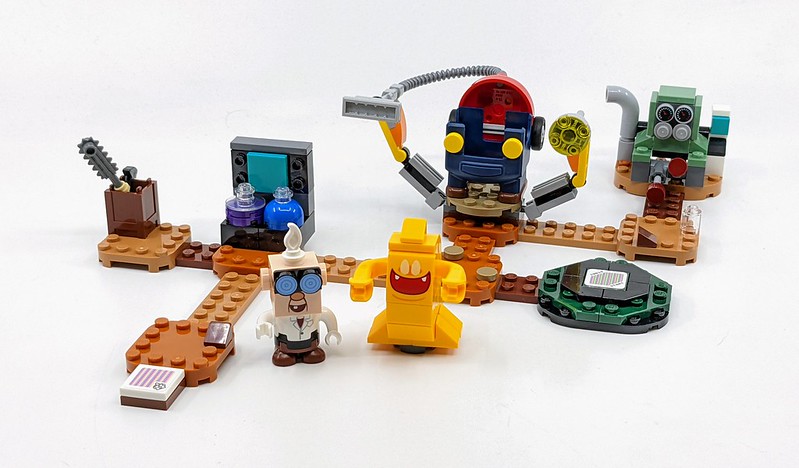 For those unfamiliar with the Luigi’s Mansion games, the premise is that Luigi becomes separated from his brother and friends. He must reluctantly step into the role of the hero with a little help from Professor E. Gadd and his wonderful inventions. Unlike classic Mario games, Luigi’s Mansion has players explore rooms in a spooky building, armed with a torch and a vacuum cleaner strapped to your back. You also face off against ghostly enemies, who can also be defeated by being sucked up into Gadd’s Poltergust 3000. 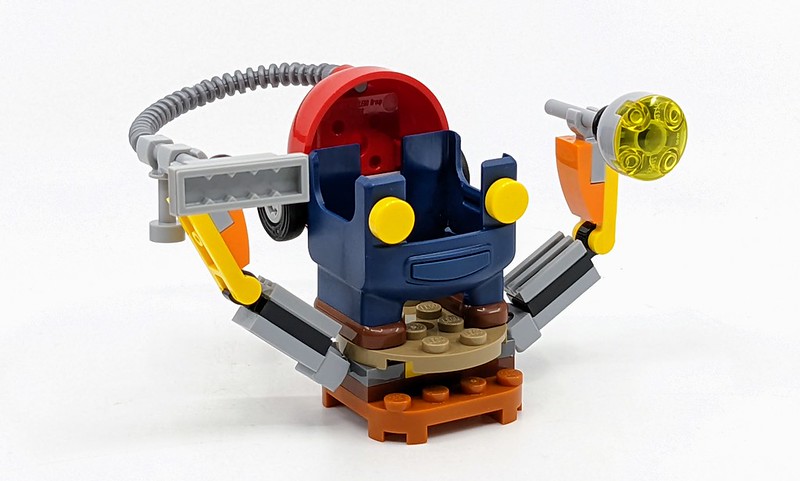 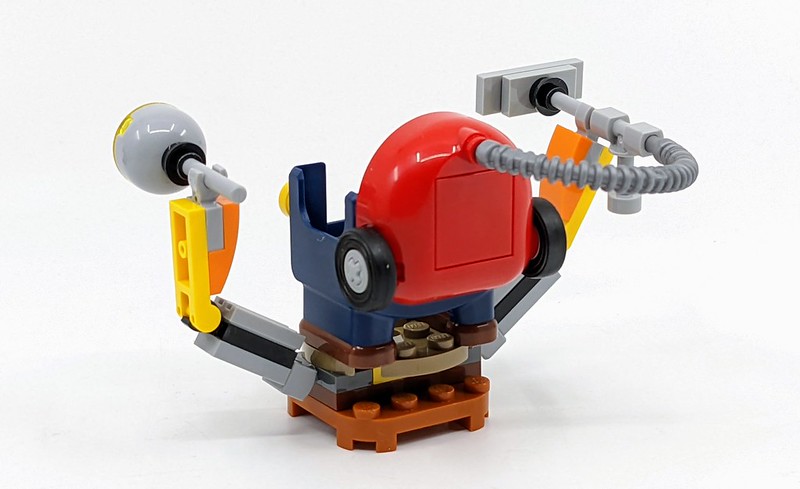 Obviously, this style of play doesn’t really lend itself fully to the play experience with the LEGO Super Mario sets so this expansion set is a little different to previous ones. It’s less an expansion pack and more a deluxe Power-Up suit pack. So although the set features a couple of buildable elements, the focus is very much on a new pair of overalls for Luigi. These introduce a pressable button, which activates the suction on the Poltergust as well as being able to connect the Poltergust 3000 to it. The Poltergust uses a new element for the bulk of the device and also includes the ghost capturing nozzle. Once connected to Luigi, pressing the button will cause the Poltergust to suck, well as least make the Luigi figure create the noise. Doing this combined with scanning the action brick on a golden ghost, will allow you to capture it and earn coins. 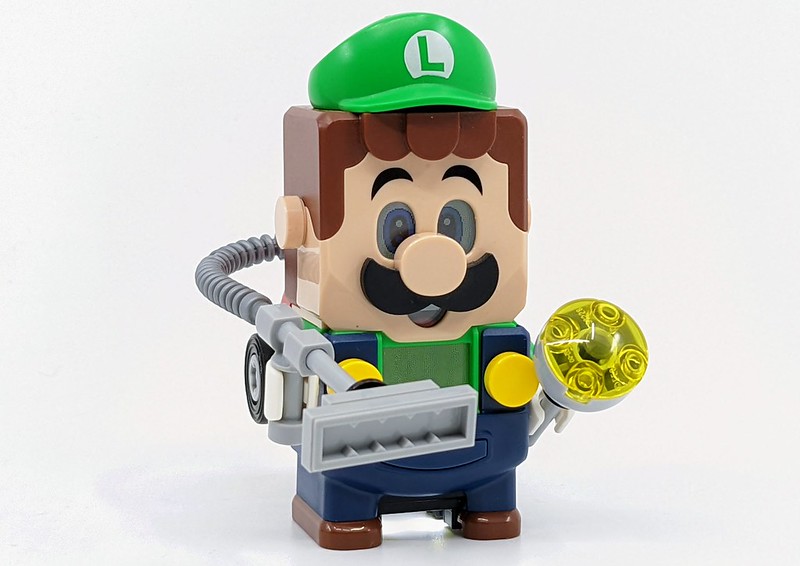 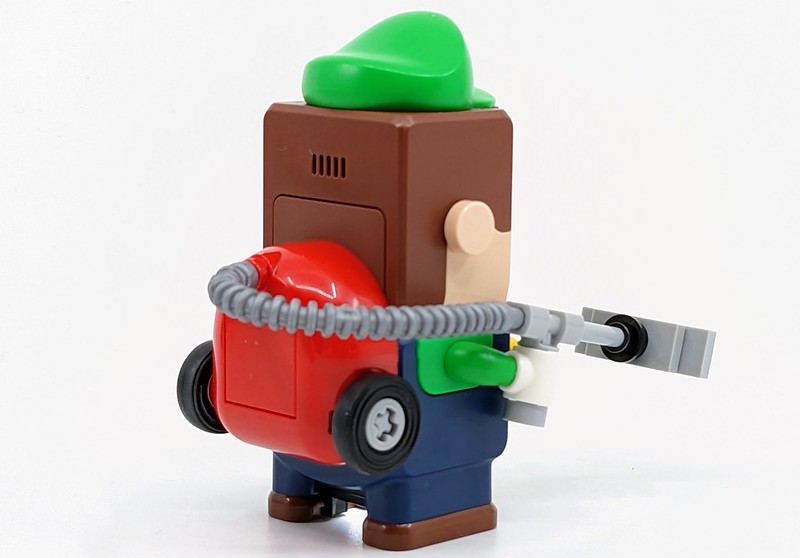 As well as the Poltergust, the set includes a stand to place it on and a number of platforms and connector plates. These are where the set is similar to other Super Mario expansion packs and allow you to integrate the Luigi’s Mansion sets into a wider array of sets. But you’ll certainly need the Adventures with Luigi Starter Course, at the very least to truly get the full experience of the set. Not only because it contains the interactive Luigi figure, but because it also features an end flag action brick. 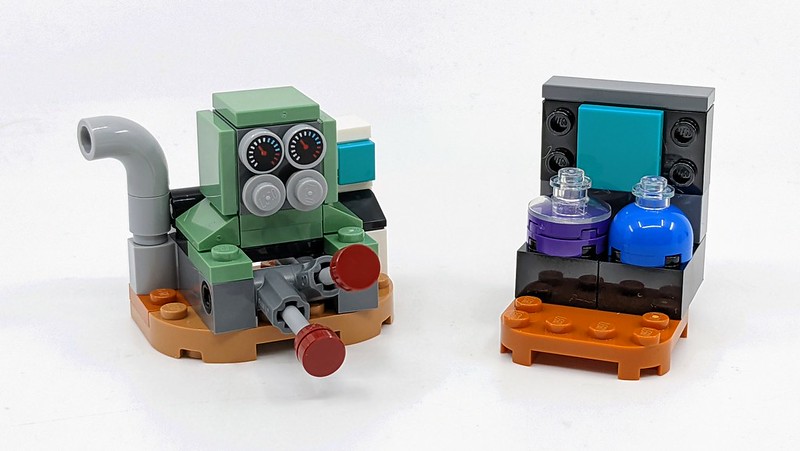 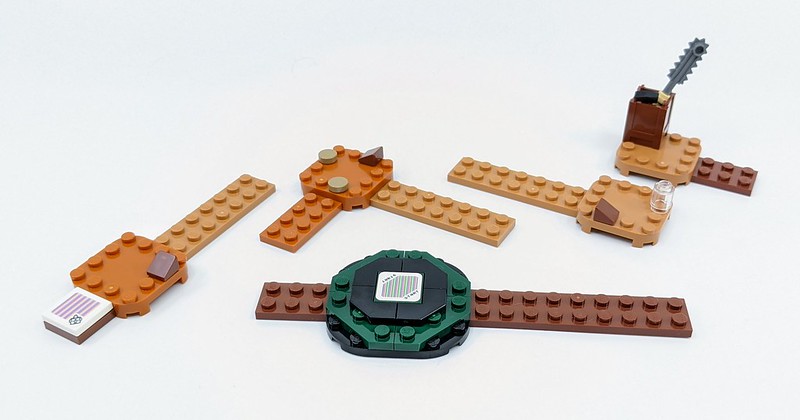 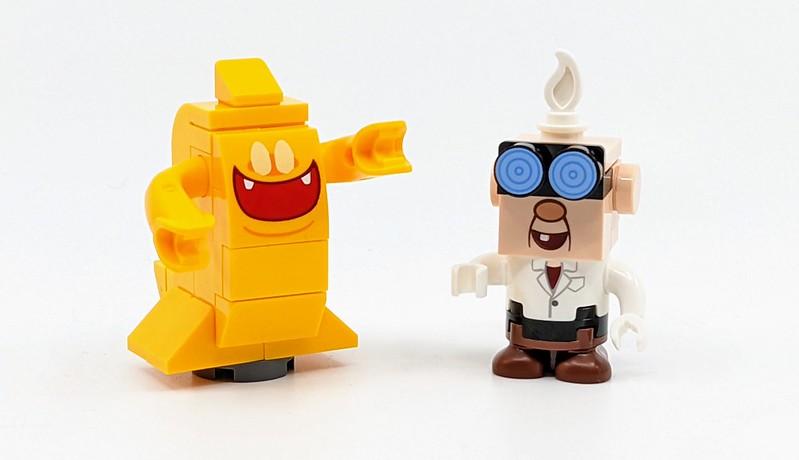 Speaking of Action Bricks, the set includes four of them. One of a lab machine, one on the golden ghost, one on E. Gadd’s platform and a special Luigi’s Mansion Start Plate. Scanning this will kick off that all too familiar Luigi’s Mansion theme tune. Whilst the others offer coins for hitting the lab machine or taking out the ghost and extra lives for paying the Professor a visit. 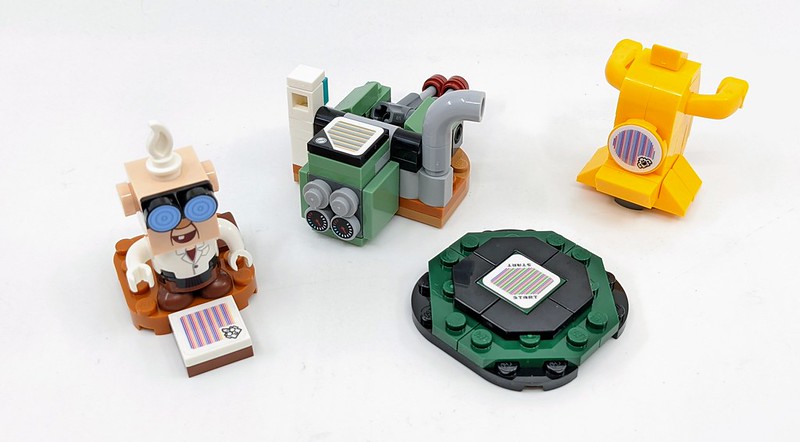 As a big fan of the Luigi’s Mansion games, this expansion set evokes plenty of good memories. From the moment I got to play the game early before the GameCube was even released to recently finishing the latest adventure on the Switch. The set has enough nods to the game to please fans, whilst also offering a fresh play experience for those who build LEGO Mario’s adventures. I’m also glad the new suit was introduced in a more substantial set. The Power-Up Suits are fun but very limited so being able to showcase the uniqueness of Luigi’s Mansion in a larger expansion set is very much appreciated. As is the introduction of the button to activate the Poltergust 3000. In essence, it doesn’t really add much in terms of the technical aspect of play – you still need to scan an Action Brick to defeat an enemy, but I’ll be damned if it isn’t fun to recreate the ability to hoover up ghosts with a LEGO version of Luigi. 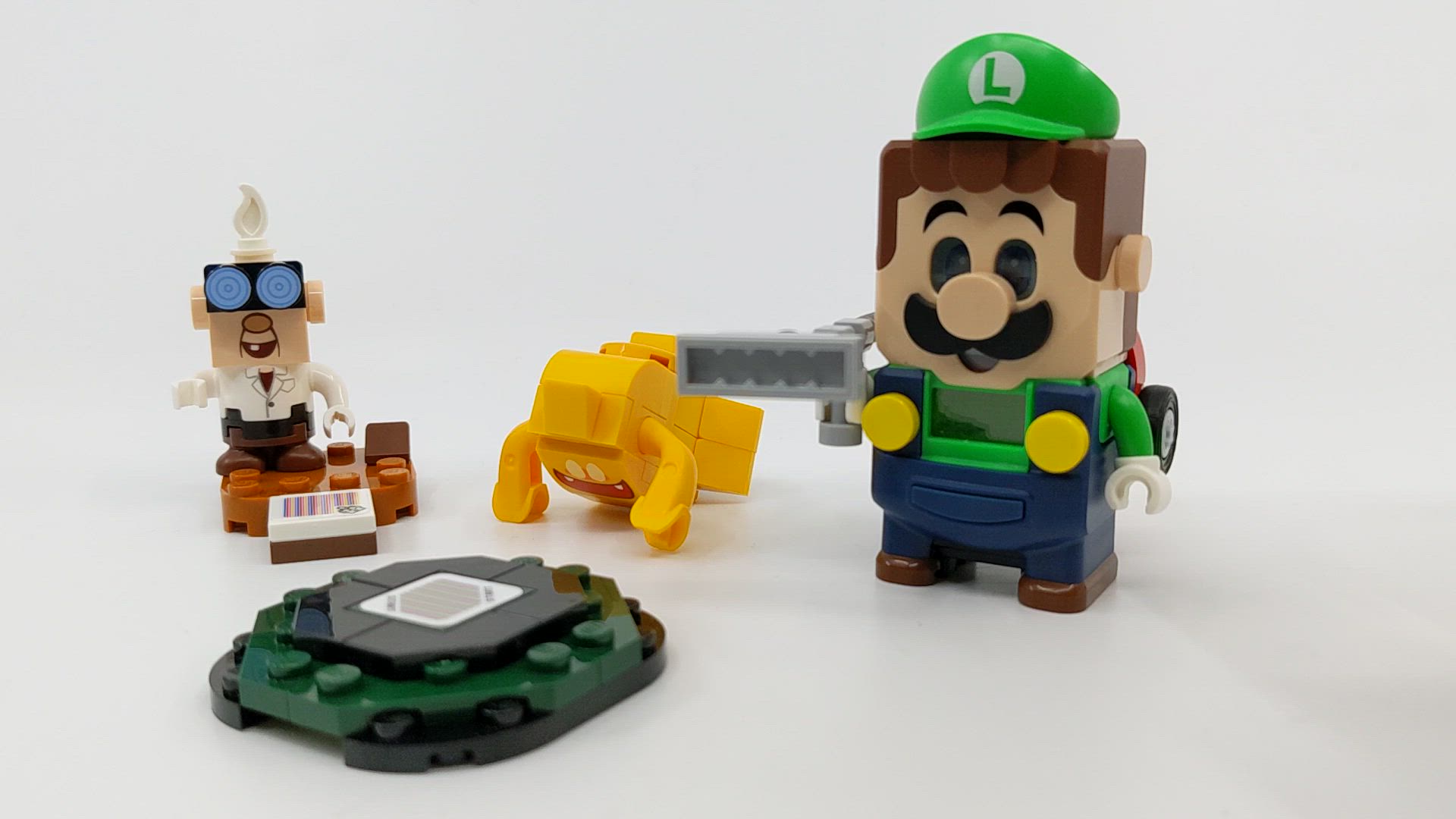