When the LEGO® Hidden Side sets sets were first revealed, there were a couple of sets which seemed to catch most people eye. Namely the School Bus, Ghost Train and huge school. The graveyard set was also used in most of the AR demo videos, so I hadn’t taken much interest in Stunt Truck set. Thankfully I’ve got all eight retail sets to build and review, which means I get to experience sets I may not have built. This is one of the Hidden Side themes, mid-sized sets and like most other sets in the theme, includes two things to build. But is it worth picking up alongside some of the other Hidden Side sets? Read on to find out, in my next LEGO Hidden Side set review. 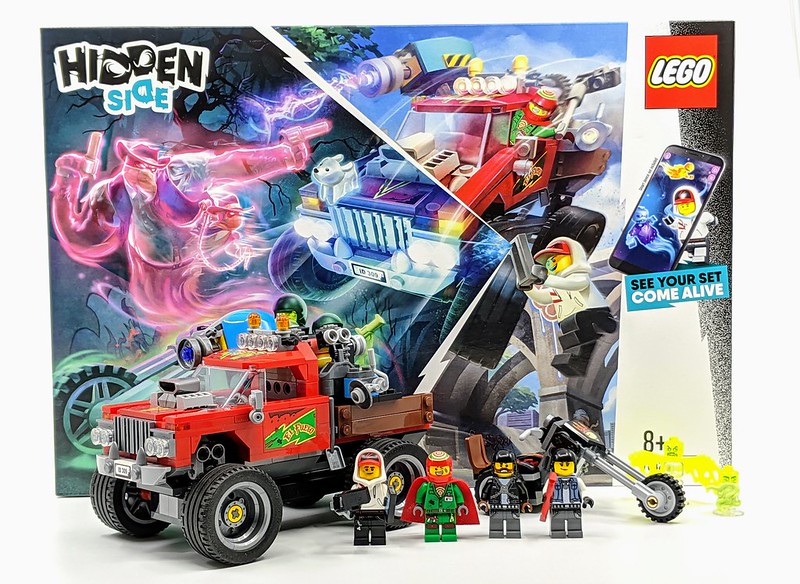 Kids can experience an exciting way to play with the LEGO® Hidden Side™ 70421 El Fuego’s Stunt Truck playset that combines a unique augmented reality play experience. Download the Hidden Side app and scan the model with a phone to make the awesome LEGO model come alive in the app. Interacting with the model in the real world makes things happen in the app. With continuous updates, a unique boss ghost to battle in each set, new mysteries to solve, cool items to find, games to play and ghosts to collect, this LEGO Hidden Side set offers kids a whole new way to play and interact with building bricks! El Fuego’s truck has working rear suspension, so kids can try cool stunts and jumps. Or they can join hero Jack Davids and his ghost dog figure, Spencer, on the back of the truck, using the toy cannon to de-haunt the two bikers riding on their 3-wheel motorcycle chopper. There’s simply no limit to the creative play possibilities.

The first bag of elements gets you to build a cool little three wheeled motorbike. This is perfectly sized when compared to the Stunt Truck and uses so few elements, it makes the final build even more impressive. What I really like is that it can seat two Minifigures, but is still nice and compact. There have been a couple of other three wheeled bikes across other themes, but these can sometimes feel oversized and bulky. Not here the scale is perfect and the use of parts is amazing. I really like the use of a NEXO shield element on the front of the bike, this element has managed to find its way into so many other sets beyond NEXO KNIGHTS, I always enjoy seeing it crop up in sets. The stickers add some nice detail to the build. 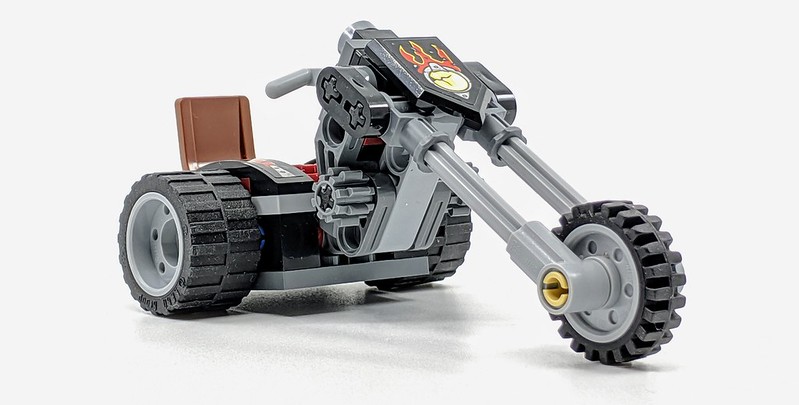 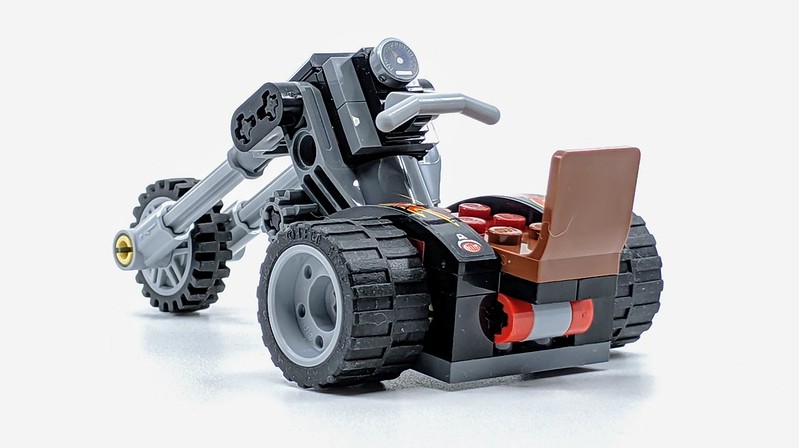 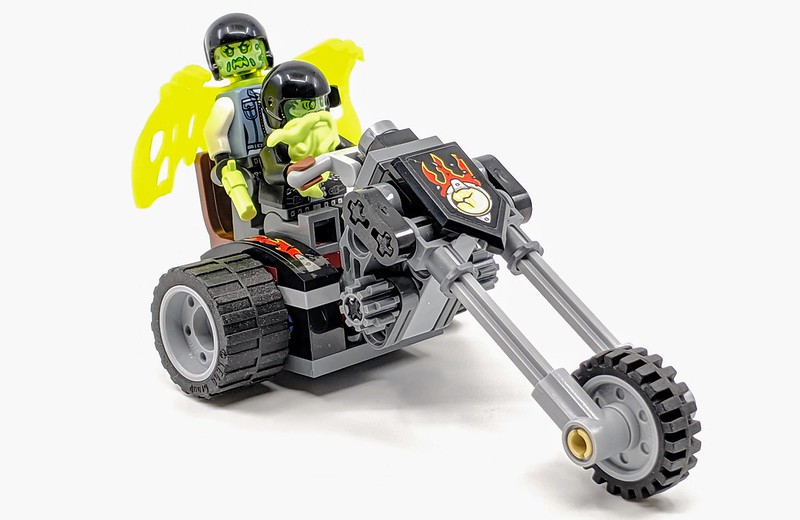 The main event is a hulking Stunt Truck. This 4×4 ‘Bigfoot’ type vehicle is your classic monster truck, often seen leaping over scrap cars in arenas. It’s built in two sections with the base being separate to the main body of the truck. But there is a reason for this, it’s to allow for working rear suspension. This is quite surprisingly simply achieved with a Technic shock absorber rod. It’s mounted in such a way as to push up the rear of the truck, when unclipped. It’s not an overly exciting play feature, but it’s fun nonetheless. The base of the truck features a large number of Technic elements, with the body of it being mainly System bricks, so it’s a nice contrast of build styles. 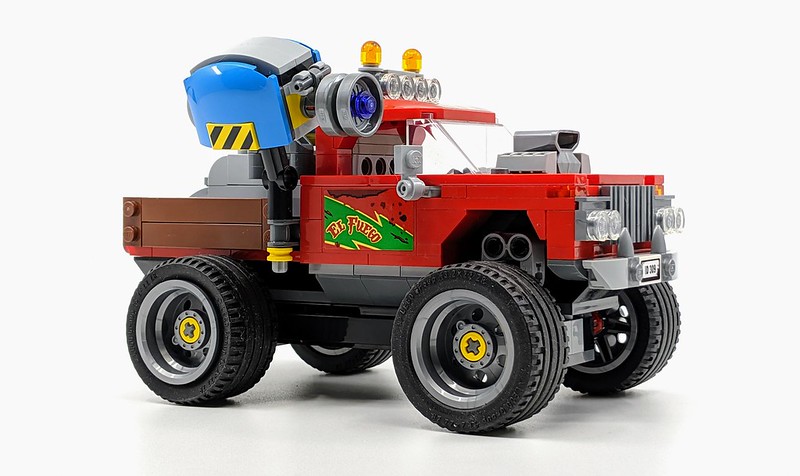 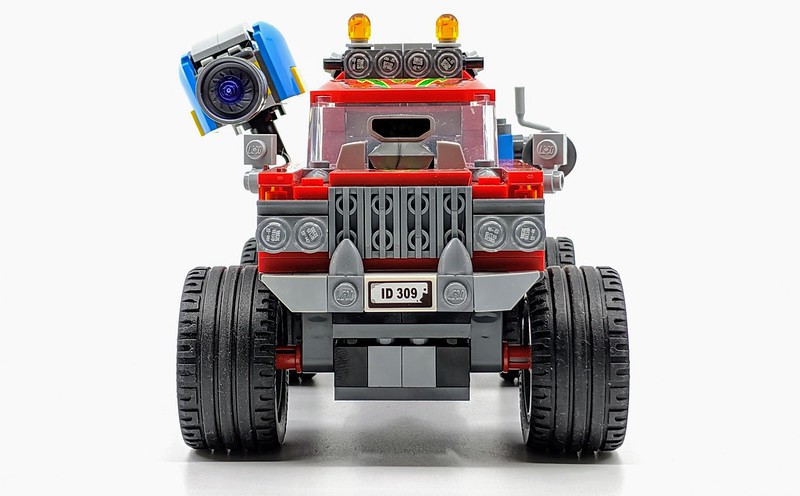 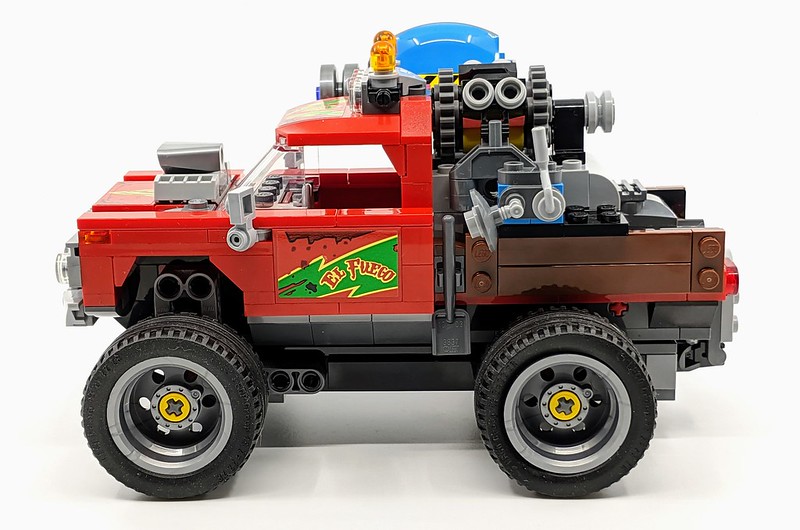 The front of the truck is nicely squared off thanks to a combination of flat tiles and a neat little front grill section. This straight line of the truck continues along the side of it. With all the bricks neatly connecting together like an all red Mondsain painting. This is complimented by a few stickers, all featuring the El Fuego red, green and yellow colour scheme. The interior has space for two Minifigures to be seated. My only gripe here is the steering wheel is slightly off centre to way the Minifigure is placed. 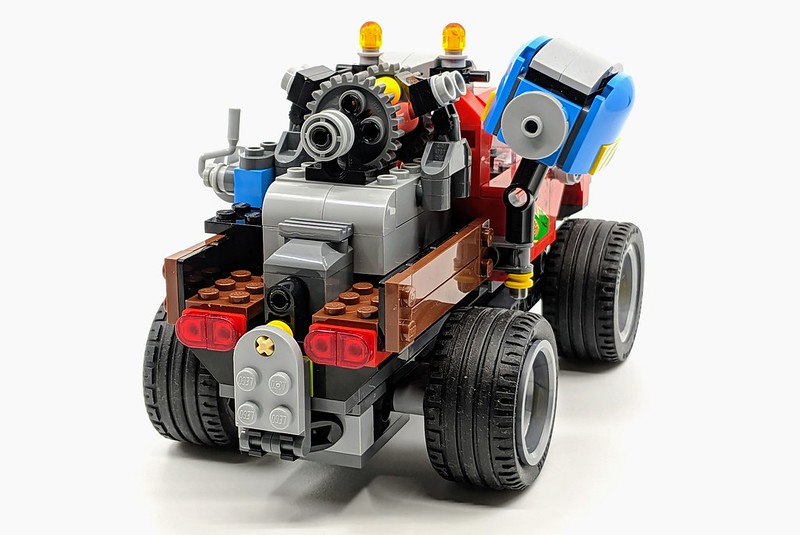 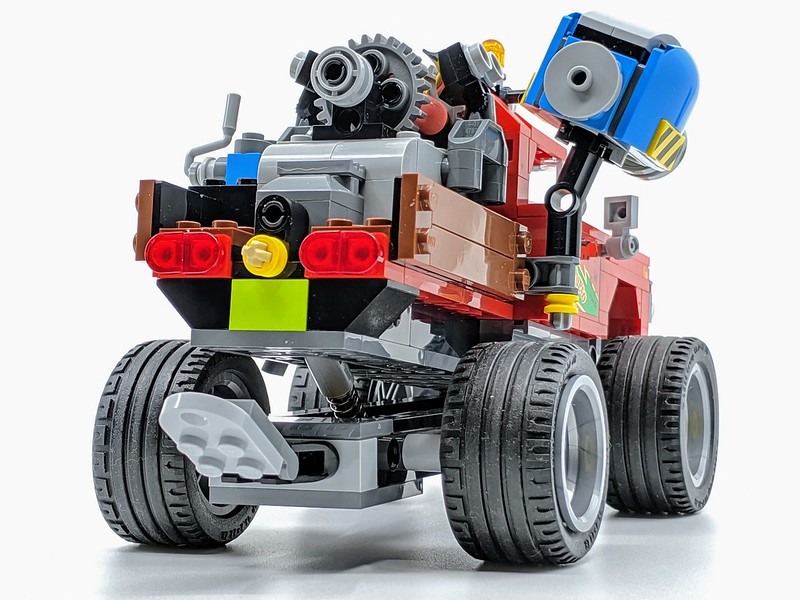 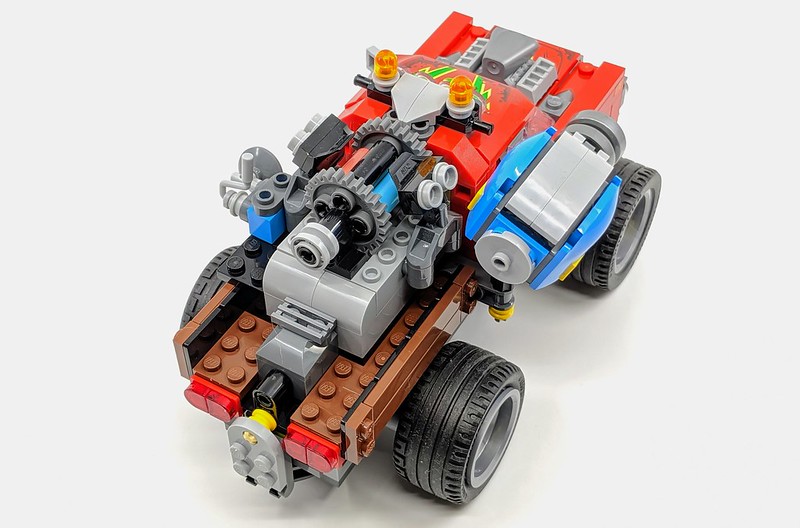 The back of the truck has been converted by J.B. to hold some of her ghost capturing equipment. These look similar to the same equipment featured in other sets, which I like. So there is larger cannon type weapon mounted near the front of the truck bed and a smaller gadget on the side. In the center is that all important colour wheel, which is nicely hidden within an large engine looking device. A couple of Technic gears can be turned to reveal the various coloured marker bricks used with the AR app.

The set features four Minifigures, two Hidden Side spooks and the paranormal pooch, Spencer. Main character Jack appears in his more common white hoodie outfit. This uses the new hoodie head element but pairs it up with a white torso and black trousers. Jack is one of the themes least detailed characters but the hoodie is a great new element. When he isn’t being possessed by Hidden Side spooks Douglas Elton likes to become a little less scary alter ego, legendary stuntman, El Fuego. This Minifigure has the same torso, legs and head as featured on Douglas in set 70418: J.B.’s Ghost Lab, but has the addition of a cape and helmet, in place of hair. 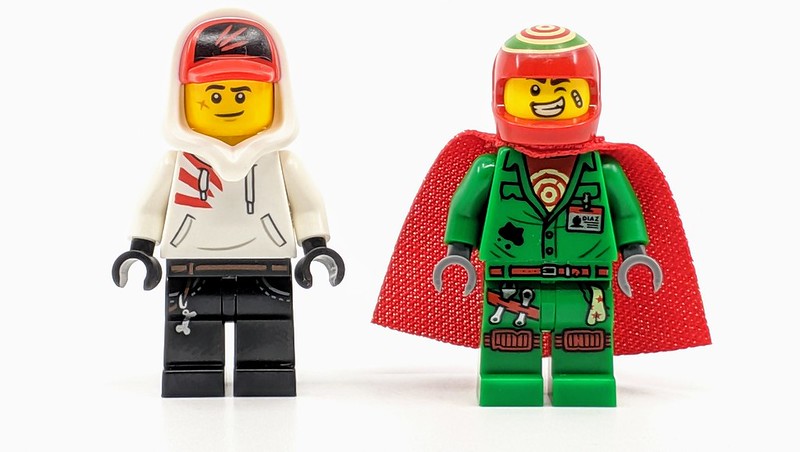 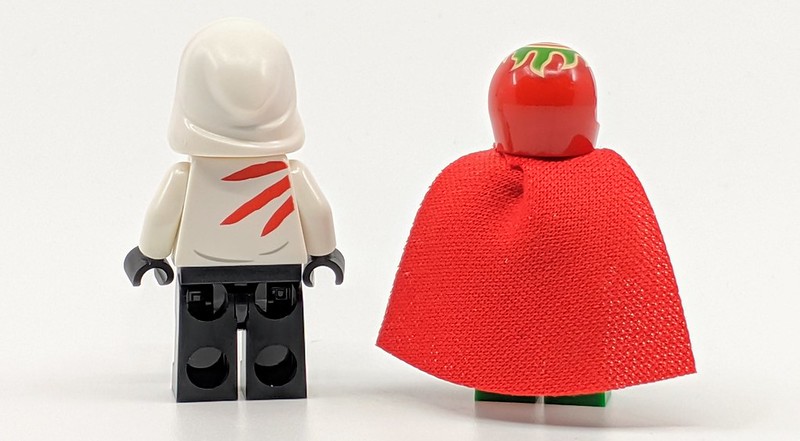 They are joined by the Newbury bikers from the menacing Hares of Havoc biker club. Dwayne and Joey are both great little Minifigures, they both look like grizzled bikers, happy to cruise the highways on their steel hogs. I love the printing on their backs, which shows their clubs logo and this is complemented by the use of the newest ‘football helmet’ in place of the traditional LEGO helmet element. Dwayne has two facial expression, but oddly Joey doesn’t. 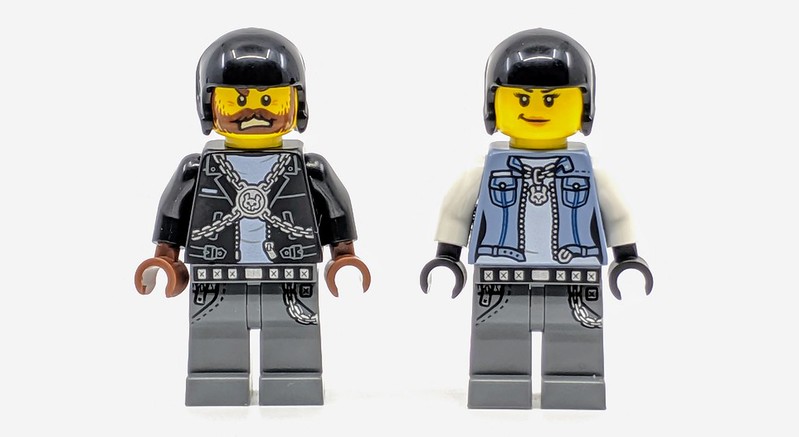 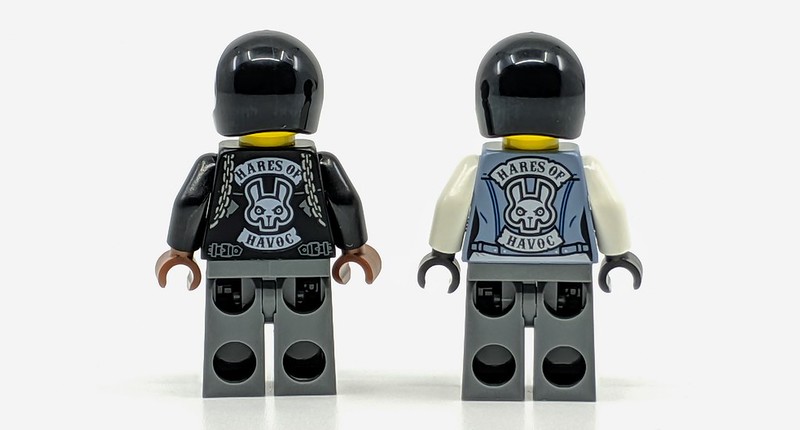 They soon become a little more grizzled when the Hidden Side takes over. Both head are switched out for the transparent Gloombie versions. Dwayne gains a pale green ghostly beard and Joey a rather cool set of wings. Both retain their helmets in place of ghostly hairpieces. 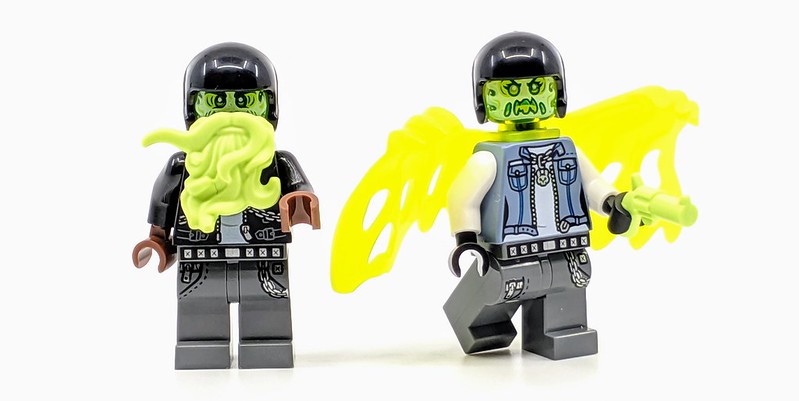 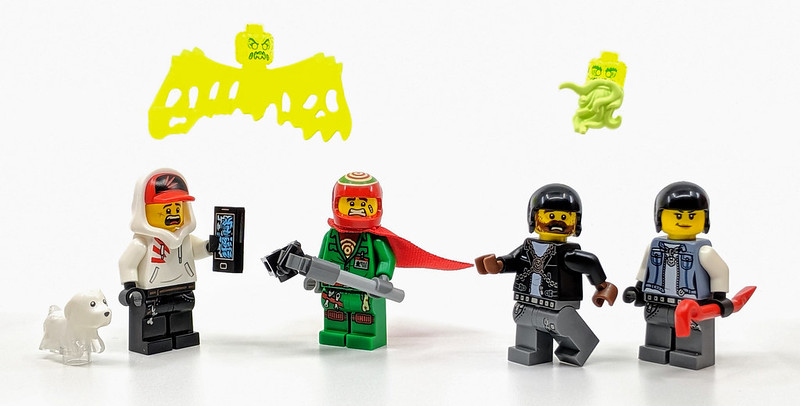 The set may lack physical play features but you can bring it to life with the AR elements in the Hidden Side app. This overlays scenery and animated elements around the physical set. There are various specifically coloured elements which act as scan points. The colours can be scanned with the app, to unlock collectibles and ghosts. The Stunt Truck only features the tri-colour wheel but works in the same way as other sets. With the overlaid

With all the other sets in this first wave of the theme, this is one set I’ve paid the least attention to, but it’s actually a cool little set. The build is fun and the end result of both vehicles is great. I would have like to had a little more play functions in the set, the expanding suspension is fun but doesn’t really do much, but it is a well done function. The motorbike is very cool, clever build techniques and so few elements results in a bike to rival to he bigger 4×4 stunt truck. The Minifigures are fun, especially the variant of legendary Stuntman, who has a passing resemblance to a certain school janitor and lab assistant. The two Newbury residents done change much when possessed compared to other sets, but I do like the addition of the ghostly wings on Joey. It may not look as exciting as the school bus, train or school, but it’s a surprisingly decent build and a solid vehicle once complete. One thing I am surprised at is that they didn’t go down the route of possessing the Monster Truck, a couple of tentacles elements and eyes on the headlights would of worked a treat. 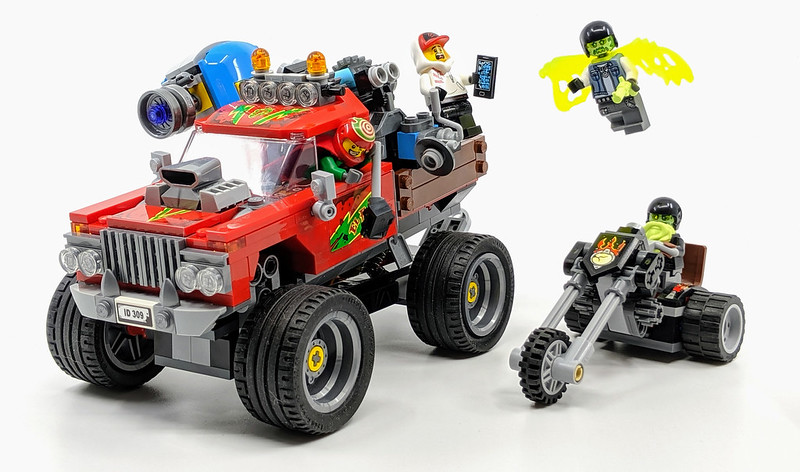