Much like the Ice-Cream Truck I reviewed over the weekend, the little LEGO® City Street Sweeper is another set which makes a nice change for the many LEGO City Police and Fire sets we get get each year. It’s also one of the smallest of the new LEGO City sets being released on December 26th. Unlike the Ice-Cream Truck, Street Sweepers have been a little more prevalent in the LEGO City line, appearing in everything from polybags to standalone sets, as well as being dotted in a number of large scale sets. How does this new version shape up as a set? Read on to find out. 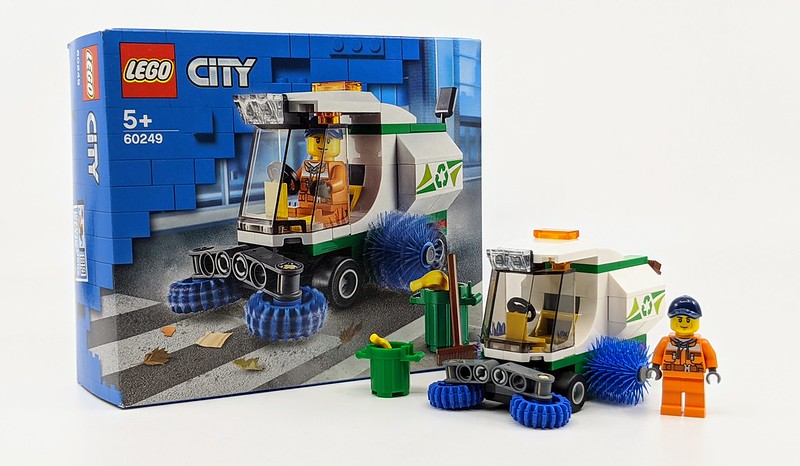 Youngsters will love to role-play everyday heroes with the LEGO® City Street Sweeper (60249). This awesome toy truck features realistic brushes that spin when it’s pushed along, plus a garbage can, shovel and minifigure driver. Just add a budding builder with a big imagination and let the play begin. Great building set for kids This cool construction toy comes with Instructions PLUS – part of the free LEGO Life app for smartphones and tablets. This interactive building guide, with amazing zoom and rotate viewing tools, quickly helps younger LEGO builders become master builders. LEGO City Great Vehicles – Cool toys for kids Kids grow up surrounded by amazing vehicles and machines on land, air or water – and with LEGO City Great Vehicles sets, they get to explore them up close! These fun building sets inspire open-ended, imaginative play, where children can recreate scenarios that reflect real life in a fun and exciting way. 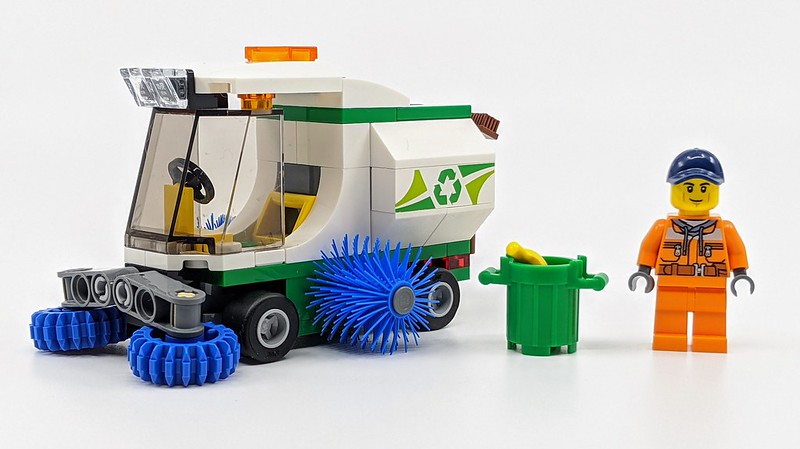 The Street Sweeper is based on one of those smaller electric cart type vehicles you’ll also see pootling around town centres. So it’s the perfect size for a smaller LEGO City set. It also has some nice features for such a small set. Firstly there are a trio of sweeper brushes. The two on each side of the Street Sweeper use the classic bristle type elements. The front brushes are made from a pair of blue gear elements, these don’t often appear in blue so they could be considered rather rare. What I do like about the brushes are, there aren’t any complex gear systems in order to get them to turn, they do that merely by the power of pushing the set along. The friction against the surface causes them to turn 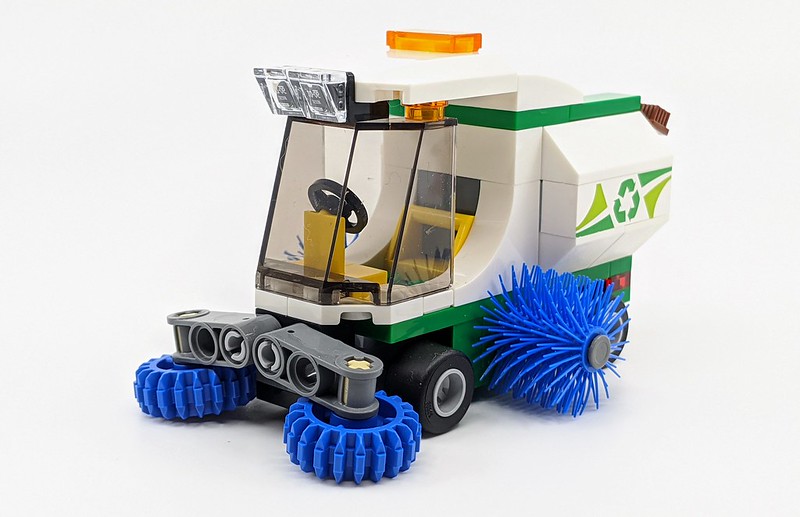 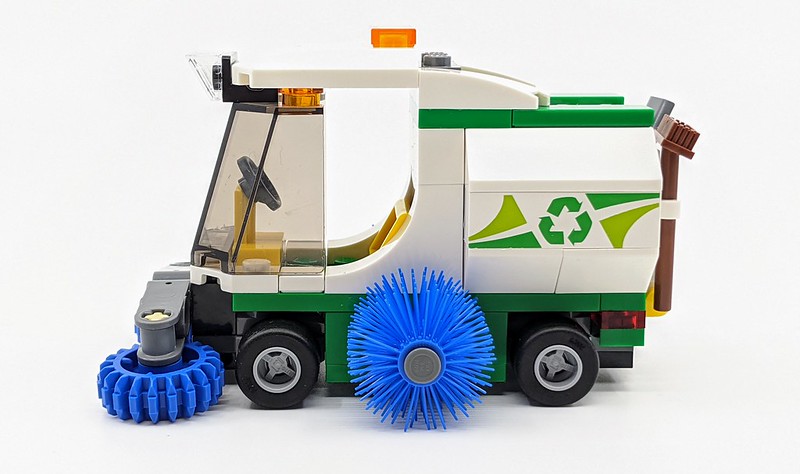 The sides of the vehicle features two white 1×4 bricks, which featured printed graphics. These blend nicely into the rest of the Street Sweeper’s rear containment area. At the very rear of the vehicle is a small flap panel. The area behind it, is merely for show as you can’t really get anything in there. There are also two clips on the rear of the Street Sweeper where you can store a shovel and trusty brush. I whole set is finished with a green dustbin and a single banana. 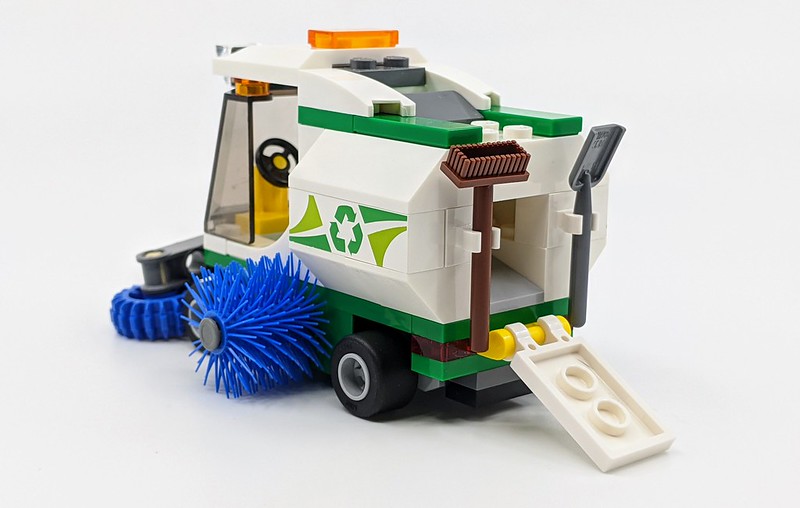 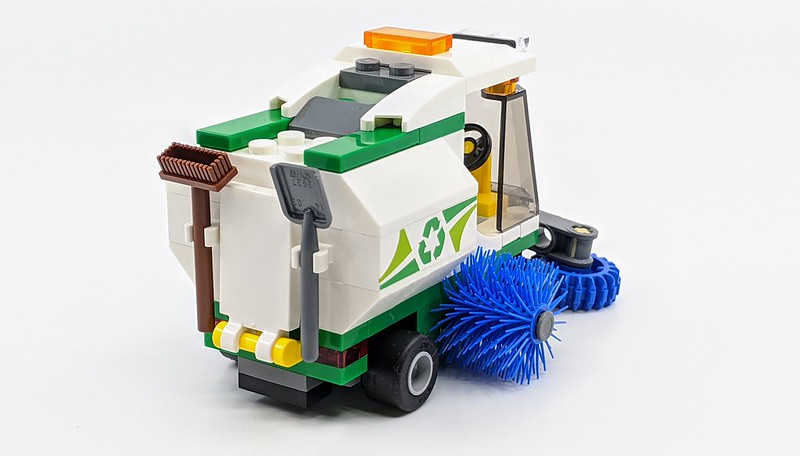 As a small set, there is only one Minifigure included. The Refuse Worker isn’t anything special, using a torso often found in construction themed sets, but it works well for here. 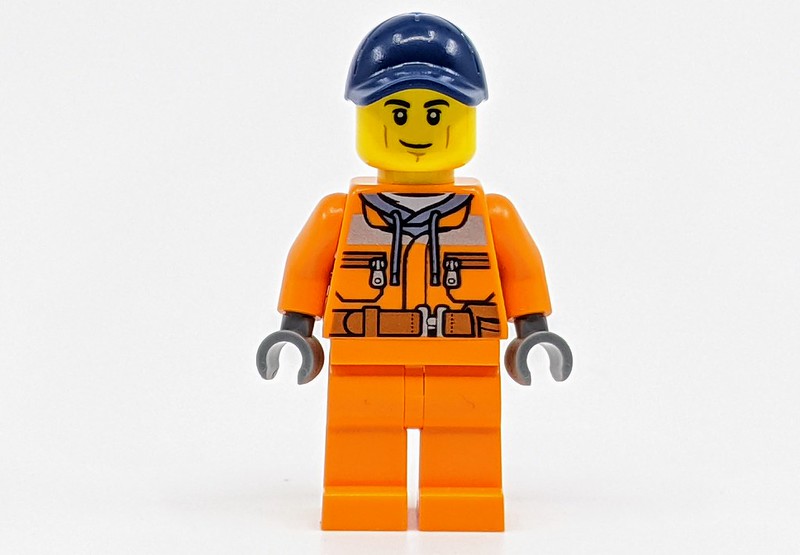 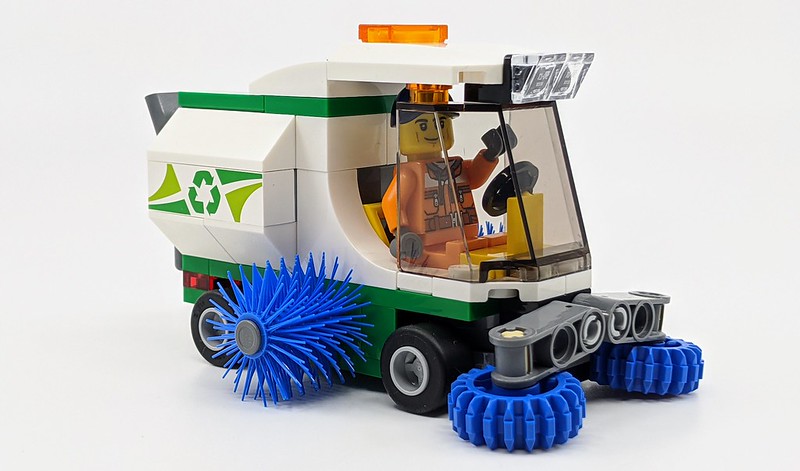 The Street Sweeper is a neat little set. I like it’s compact size and the overall shape is perfect compared to the real world vehicle, it’s inspired by. The way the brushes move just by pushing it along is a great play feature. It’s also nice to have a LEGO City set which is something different from the normal police cars and fire engines. This along with many other new LEGO City sets will be available in stores globally from December 26th. There will be more new LEGO set reviews over the festive period.

Please note this set was purchased from a retailer and not provided by the LEGO Group for review, therefore BricksFanz is not tied to any embargo which may be enforce for sets.