I recently shared a survey from the LEGO® Technic Design Team and of course, I filled it in myself. One of the questions was focused on the new Control+ powered system. This got me thinking, I’ve not actually had any experience of this generation of powered LEGO play. I’ve dabbled with Power Functions and it’s System-based replacement dubbed Powered UP. Control+ is the Technic equivalent and has been used in a couple of sets so far including the Off-Road Buggy. As I’ve mentioned before, various LEGO sets have allowed me to rebuild childhood memories, from building LEGO versions of old toys I had or wanted. So this set covers two bases, it lets me try out Control+ and finally fulfils a childhood dream to own a remote control car. So let’s take a look at the LEGO Technic Off-Road Buggy. 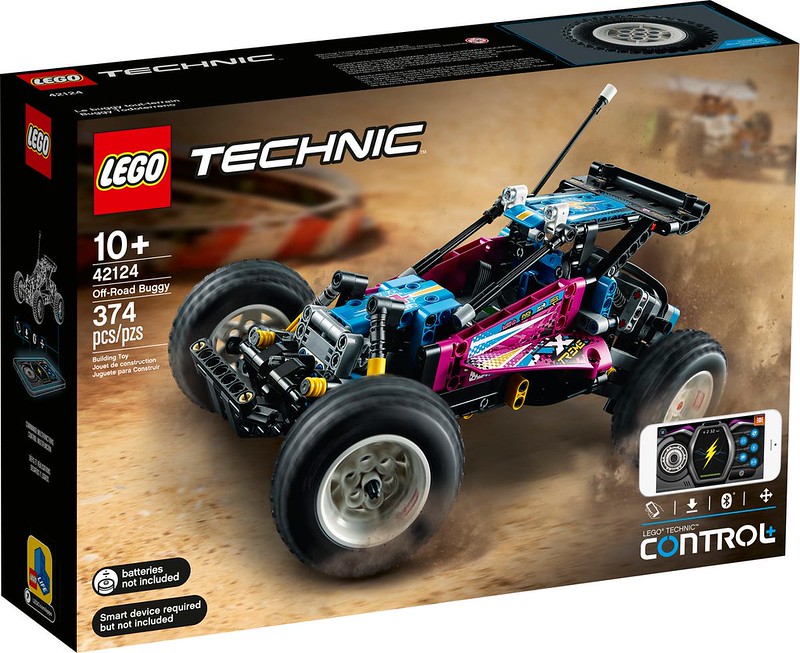 Travel back to the 1980s with this LEGO® Technic™ Off-Road Buggy (42124) – it’s fun for all ages from 10 and up. After creating the model, bring it to life using the free CONTROL+ app. The buggy is angled at the front to give stability when jumping and performing tricks, just like classic RC toy cars. With front and back suspension (a first for LEGO Technic), plus huge tires, an opening hood, antenna and retro stickers, this car is packed with attitude.

Unleash epic stunts with the app
Download the free CONTROL+ app to really put this Off-Road Buggy car to the test. Use the app to drive forwards and backwards, steer and perform stunts. With different controls, sound effects, challenges, achievements and more, there’s so much to explore. 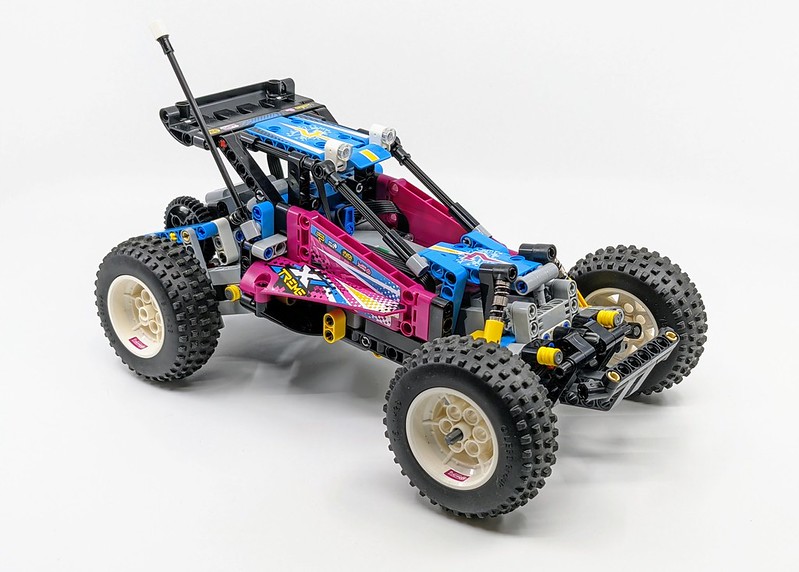 One of the most surprising things about the set is how few elements it contains. Maybe due it’s the pricing I expected more. But the high cost of the set is mainly due to the Control+ elements it features. The set includes a pair of motors and a control hub. Control+ offers an upgraded control system that employs Bluetooth connectivity over IR. This expands the interactivity with the set a great deal as you can use it over a greater distance. Plus the app adds extra features, but more on that later. 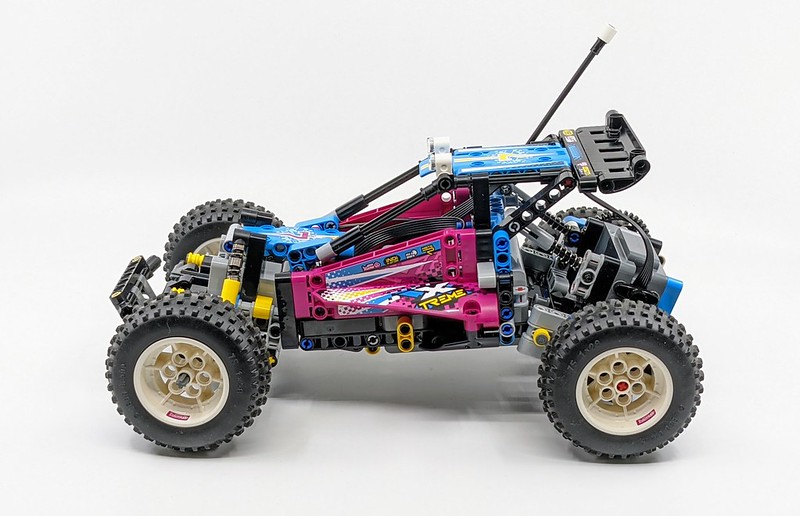 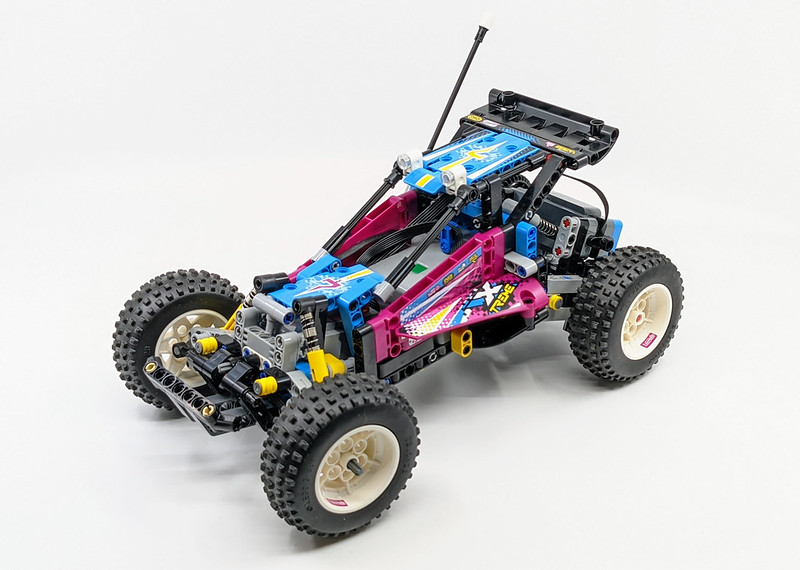 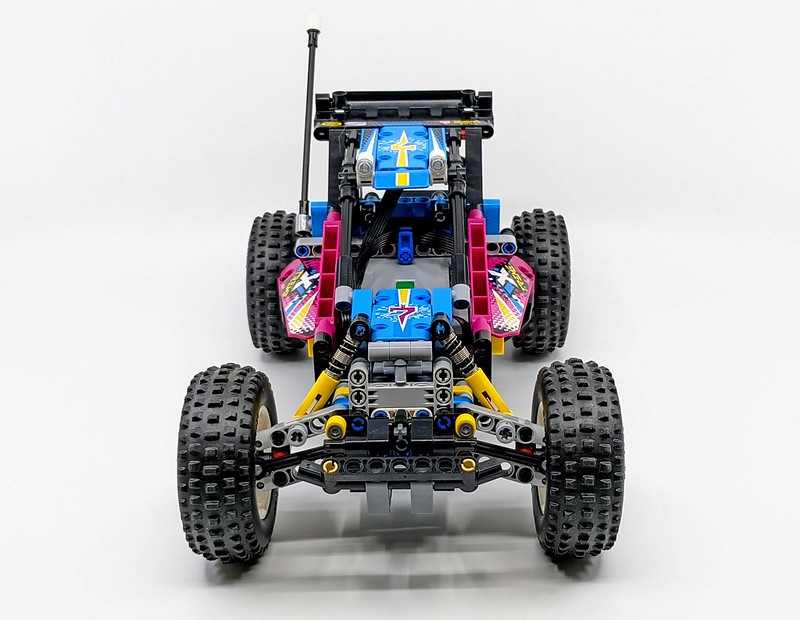 The set is built around one of the motors. With a single motor connected to and powering each set of wheels. The rest of the buggy is then constructed from this point and around the battery box. Thankfully this is easily accessed from the bottom of the buggy and without the need to remove any elements to get to it. Whilst on the subject of batteries, the set takes 6 AA batteries. I really wish a rechargeable option was included as standard in these sort of sets. 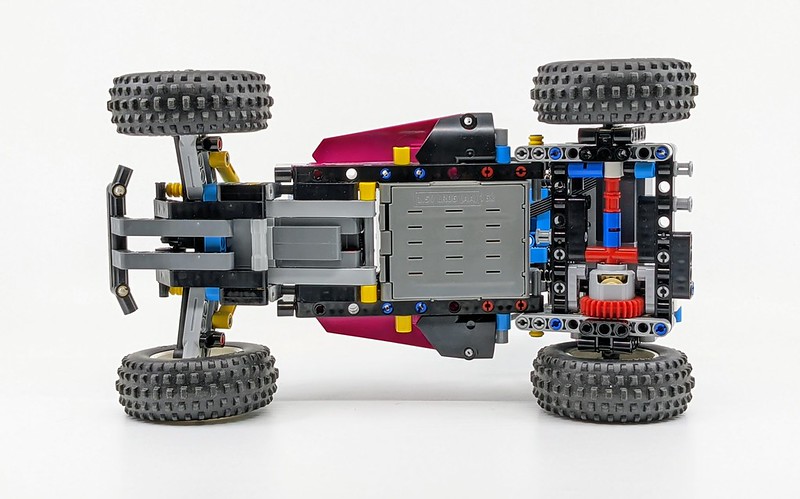 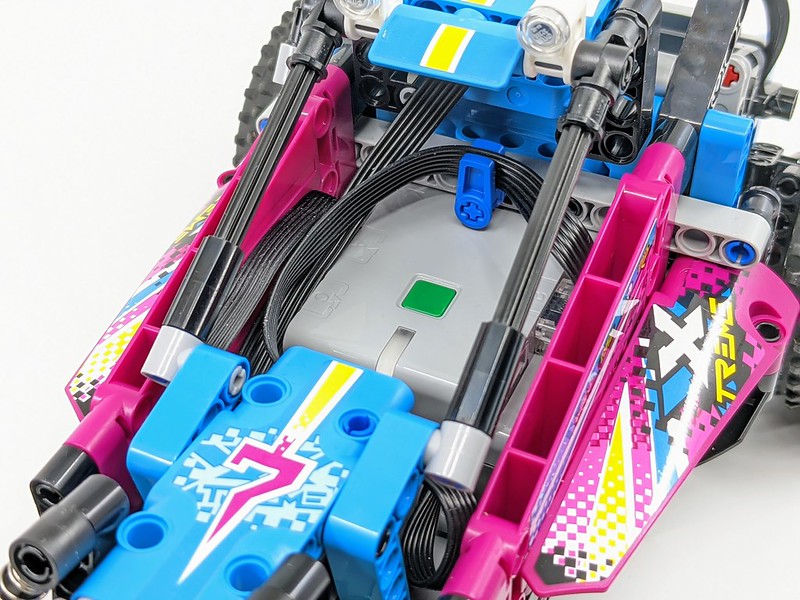 There are some interesting elements featured in the set, including a few recoloured, with some inspired by the colour palette of the Spike PRIME set, which helps with the sets 80’s vibe. There’s also a cool Technic beam, which has a series of holes along both edges. I believe this is the first set to feature this particular piece. As well as interesting elements, the set also has a cool and thankfully simple gear system. This uses a piece I’ve never had any experience with before. It’s a thimble-like element in which you place 5 small gear wheels. There’s no trying to line them up or adding them Technic axle rods. It’s a great new piece, which has been used in a few recent Technic sets. 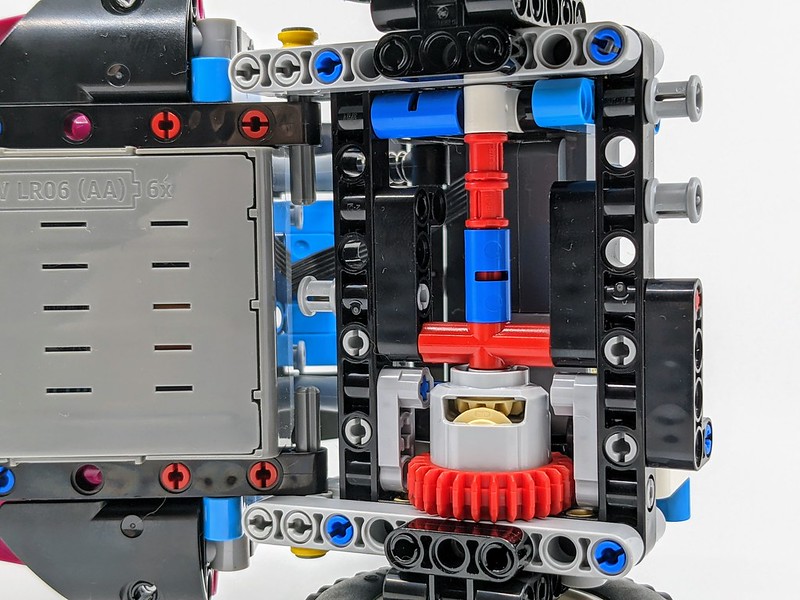 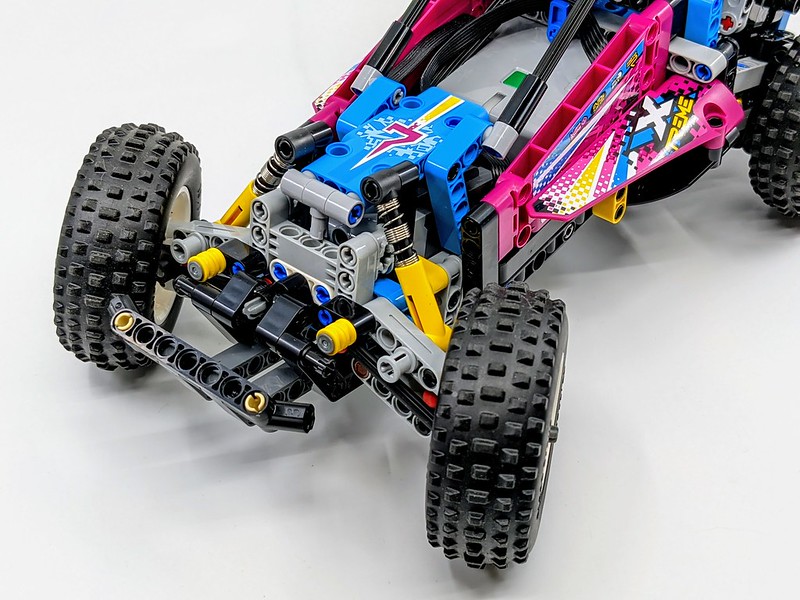 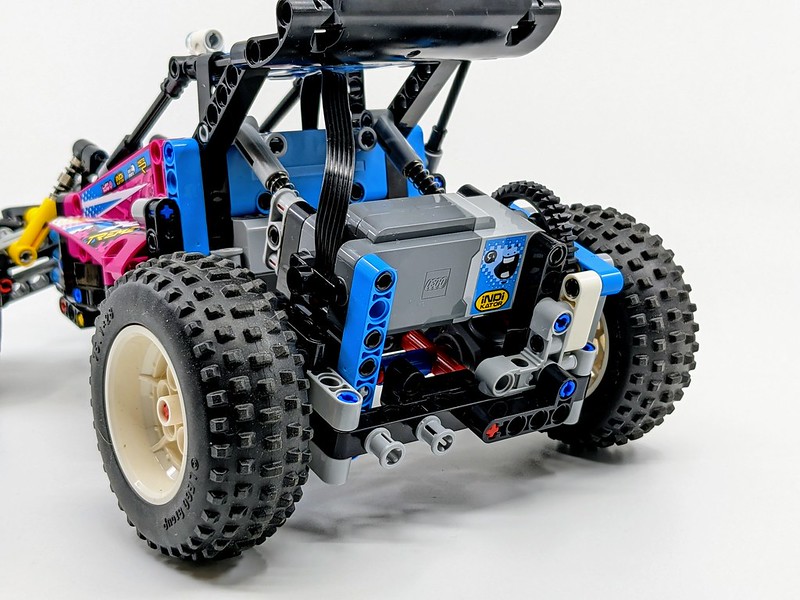 The suspension and large wheels certainly help the buggy blast across a number of surfaces. Don’t expect it to climb any mountains but it will certainly barrel over a slightly rocky patch. It’s also surprisingly nippy over grass and carpets. If only the controls were a little easier to use, you could certainly blast the Buggy around as you would with a standard RC car. 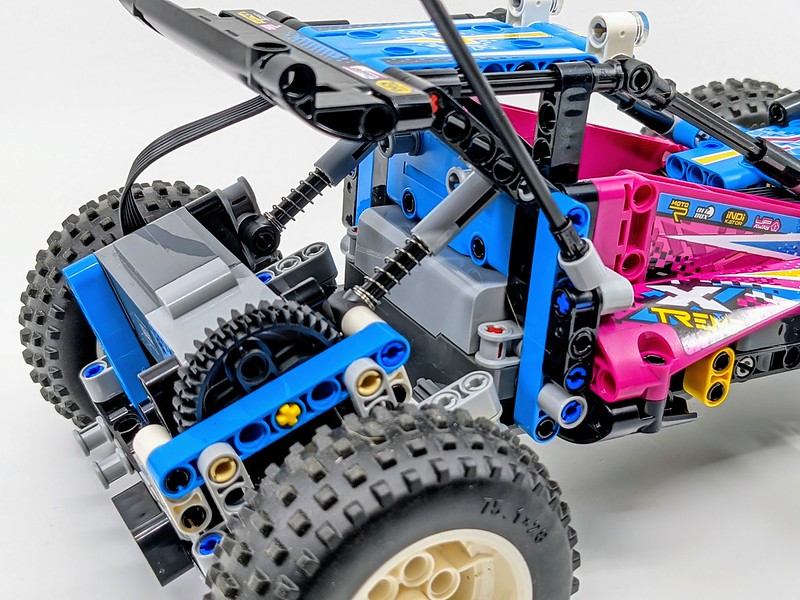 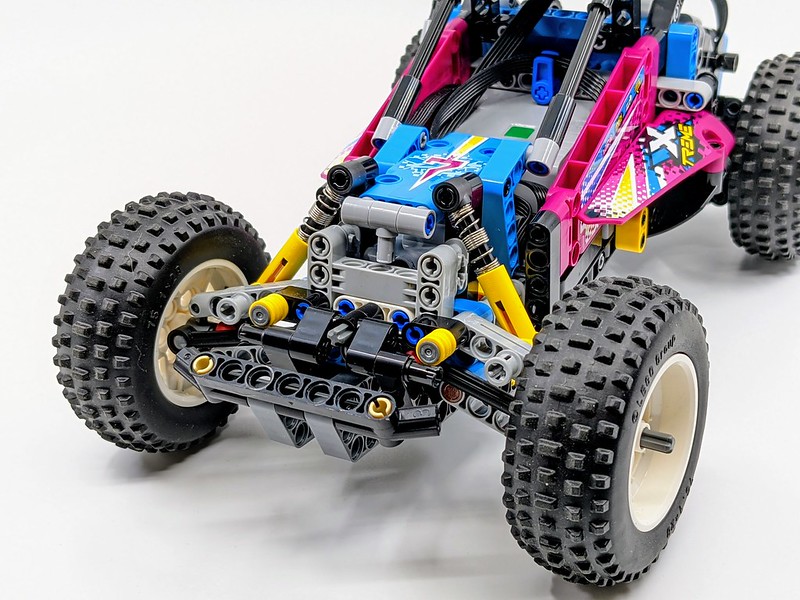 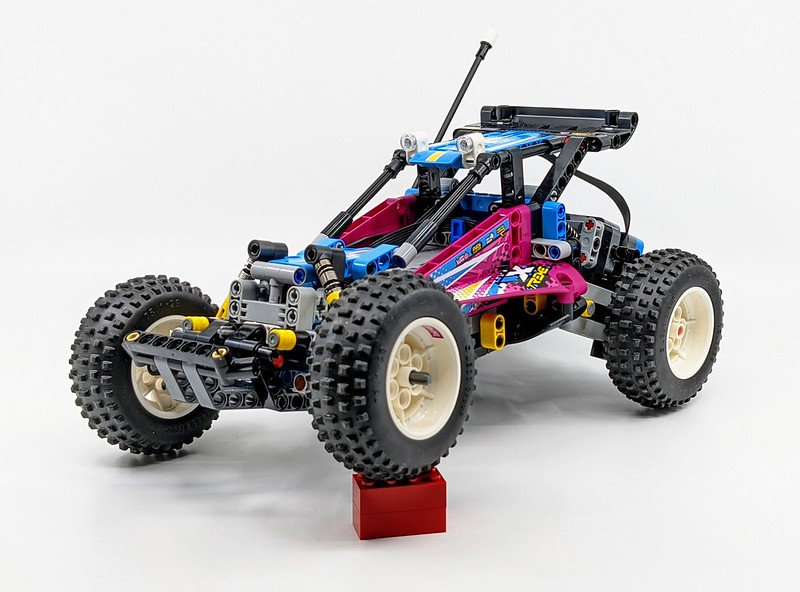 As with many of the new powered LEGO sets, there is an app-based element to them. The Control+ app is used to interact with all of the Technic sets. Each one has its own profile which offers a unique digital controller. The Off-Road Buggy control profile includes a control ‘stick’ and a set of sound effect buttons. The control stick is very tricky to use. As a seasoned gamer, I’m used to controlling things with a physical controller. A digital stick just isn’t the same and doesn’t offer the same level of finesse has a physical one. The Control+ elements combined with the apps offer readouts to the position of the buggy. So you can see the position of the buggy. The sound effects are meant to be horns so you standard sound effect along with a couple of usual ones such as a duck or a fart. The app also features a game-like system, which pits your physical Off-Road Buggy against a digital competitor. This offers power-ups that affect the controls of the car, it’s a fun extra.

My first experience with Control+ is a fairly positive one. I’ve found previous Power Function Technic sets I’ve built to be rather cumbersome and easy to mess up. The overall build of this set was nice and easy-going. In fact, I’d say this is a great starter set for those who wanted a taste of a powered Technic set. The only obstacle to this would be the pricing. Unfortunately, the Control+ elements are what’s pushed the price up, the Technic hub alone is nearly £80 and the motors are £30 each. So in that respect, the set is a great way to get the powered elements cheaper if nothing else. I also struggled with controlling the buggy with the app. It just doesn’t feel intuitive as I’m used too. Hopefully, the ability to use a game controller will be added to the set, in a similar fashion to the MINDSTORM sets.

This set was requested by BricksFanz and provided by the LEGO Group for purposes of review. The thoughts within this review are that of BricksFanz and do not reflect those of the LEGO Group. Providing the set for free does not guarantee a favourable opinion of the set.