LEGO® Friends sets are often overlooked by the AFOL community. Friends sets often include an unusual mix of colours and of course, Mini-dolls, so I understand they lack the appeal of other themes. But they shouldn’t be completely written off as LEGO Friends has plenty of hidden gems and the set I’m taking a look at today is one such set. As the Friends sets continue to diversify ahead of a rumoured reboot, this is the first set to be inspired by the theatre. So here’s a look at Andrea’s Theatre School. 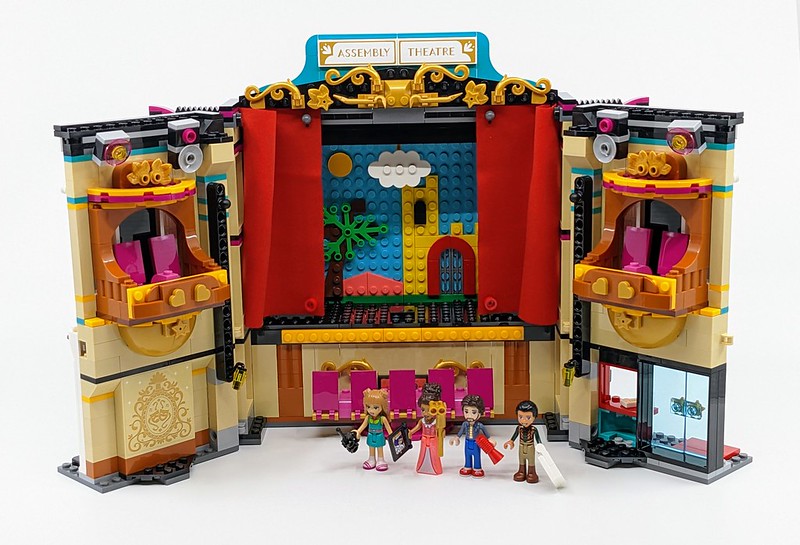 Know a kid aged 8+ who lives for their acting classes? Make their day with Andrea’s Theater School (41714). Let them imagine being a star of the stage with this beautiful theatre building, where kids who enjoy all things drama will love exploring this detailed model’s many features.

Toys to feed imaginations
The Victorian facade opens to create the theatre, complete with orchestra and balcony seats. Opening the textile theatre curtains reveals 2 backdrops – a medieval castle and a nighttime cityscape. Spin the theatre round and there’s rigging for the lights and a dressing room where characters get made up, just like at a real theatre! There are also toy props so kids can create dramatic scenes of their own. LEGO® Friends Andrea, Ollie and Freya can act out parts under the tutelage of Prof. Adrian. 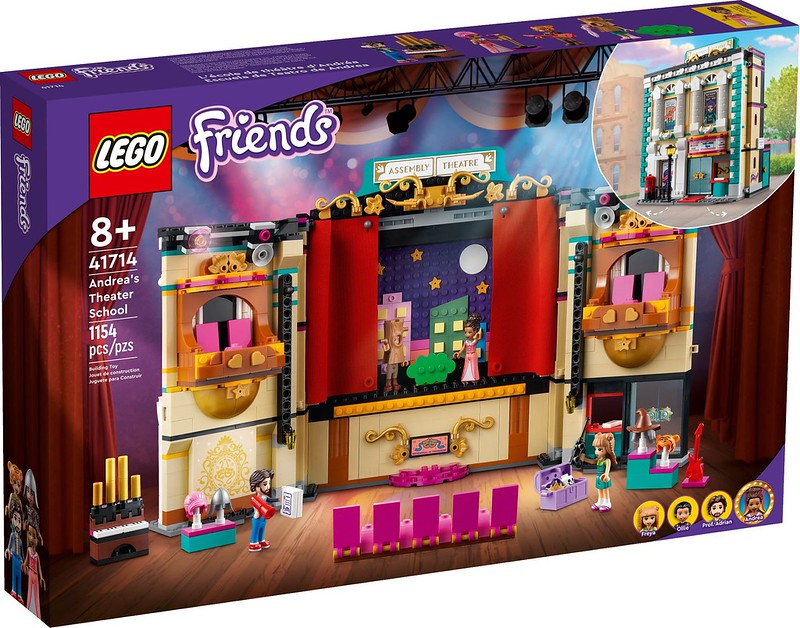 Despite the set being highly detailed through its build techniques, these are enhanced by a large number of stickers. The set includes 2 sticker sheets, with most of them, used to create signage. One of my favourites of the stickers tips a hat to the Friends spin-off theme, LEGO Elves. The fantasy theme also featured Mini-doll characters. 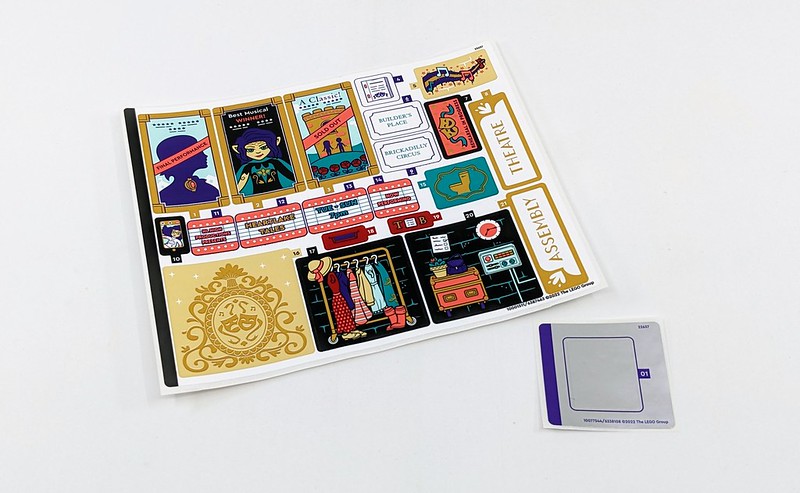 The build is split into four sections – the stage, two side panels and a set of backdrops. Much of the build is focused on the central stage section of the theatre. Although the actual stage platform is quite small, it has enough room to add a few props and a couple of Mini-dolls. As you’d expect, the stage also features a small trapdoor in it, which can be opened with a rod found around the back of the stage. In fact, backstage is where you’ll find much of the set’s detail and play functions. 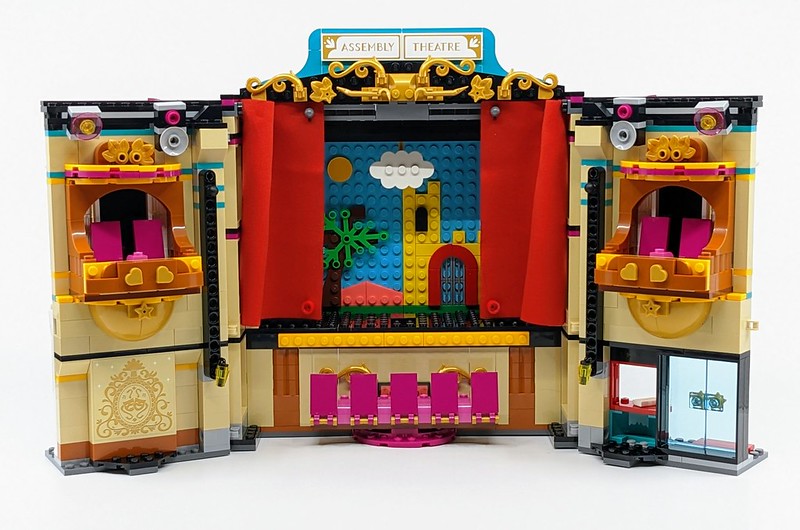 Backstage has a lot going on, it’s sectioned off with a handful of small nooks. These are filled with many removable minibuild props. These include an organ, costumes and wigs, everything you’d need to put on a host of performances. Most of the props are standard pieces used for minifigures, most work well enough on the Mini-dolls, although things like the tree costume and tiger hat, look a little odd. 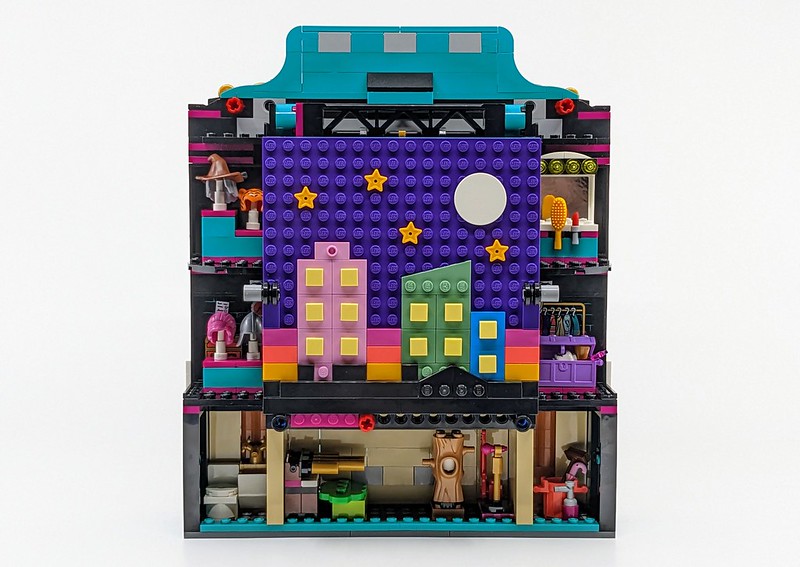 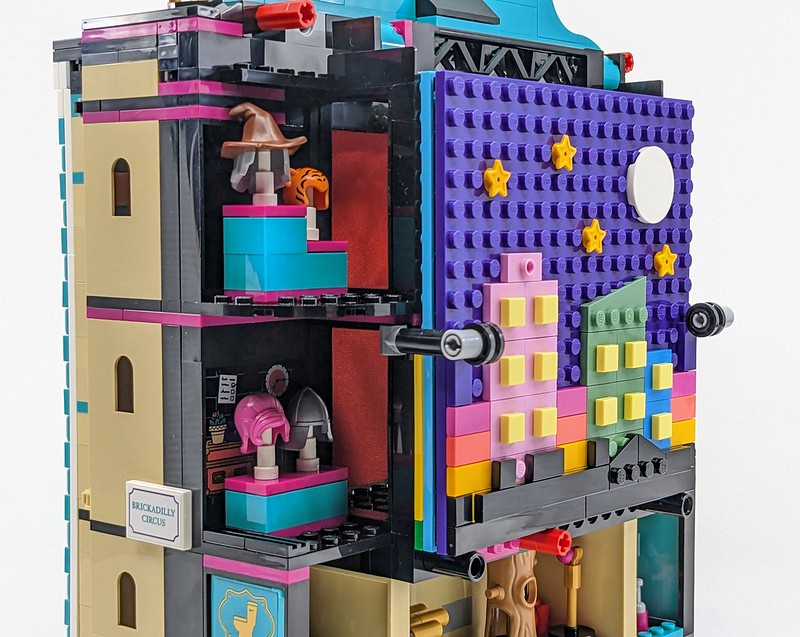 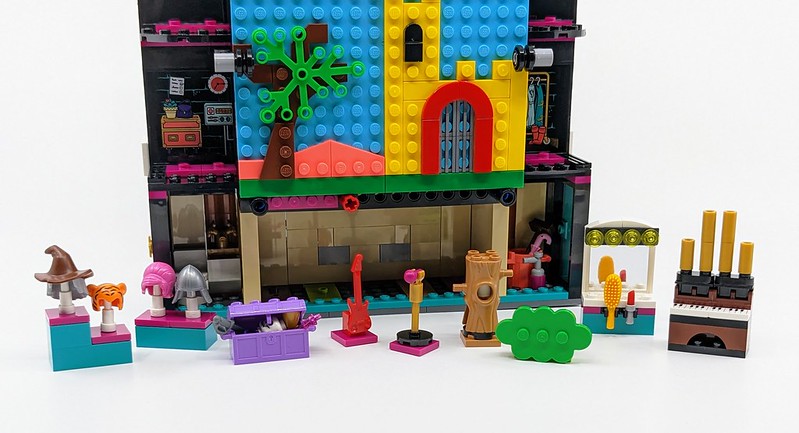 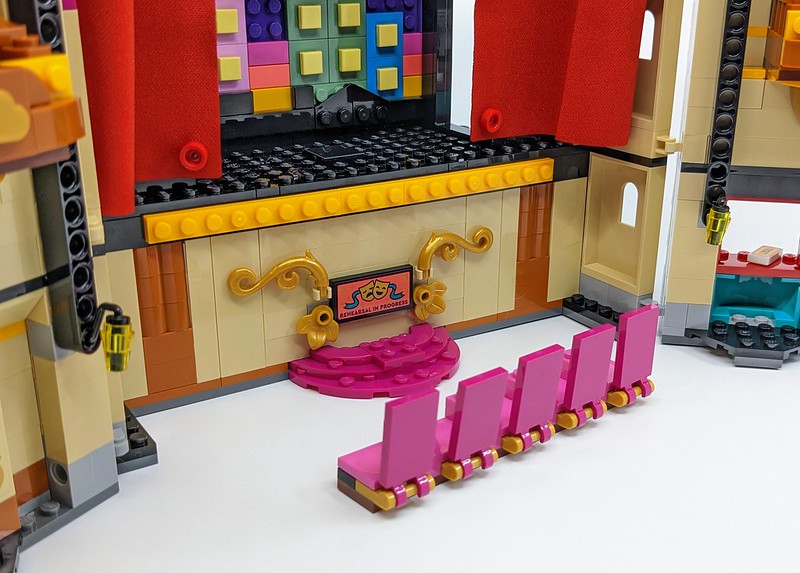 The set contains two simple yet really neat functional play features. Firstly, there’s a working curtain, which uses two unique material pieces. These are mounted on a rail system and by turning a pair of Technic axels, they open to reveal the stage. The other feature is even simpler but is a very inventive idea. A 16×16 plate is used to create a backdrop for the stage, one features a familiar-looking yellow castle and the other a nighttime city scene. They can be swapped to give the stage a different look and neatly sit at the back of the set. So simple but works perfectly. 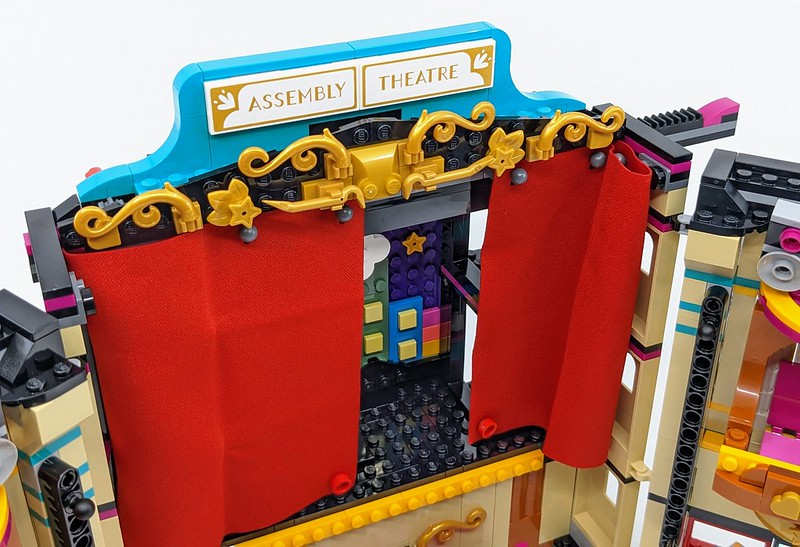 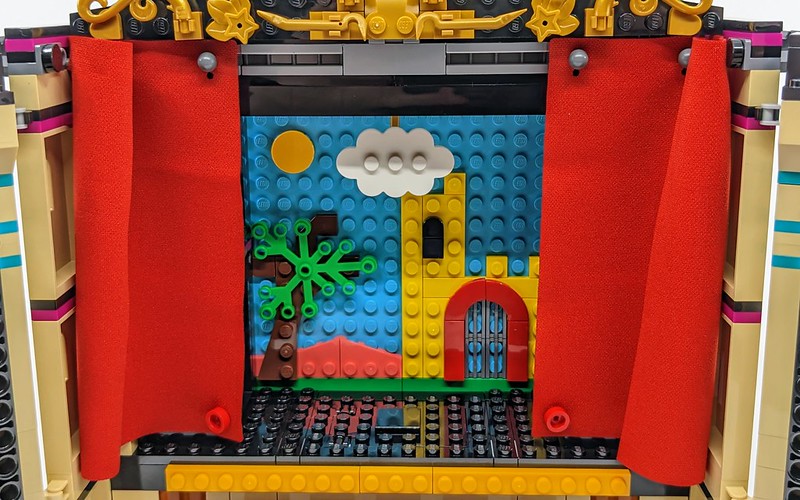 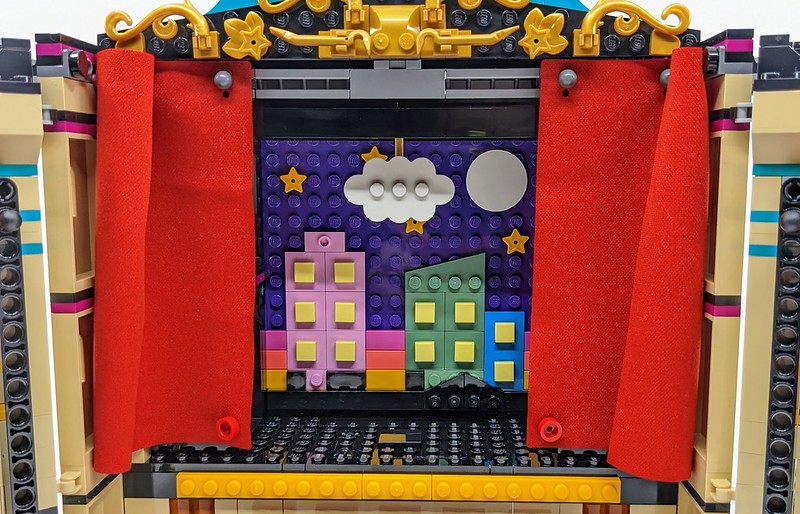 Beyond the main stage area, there are two side panels, these can be closed to make the whole set nice and compact. Or opened out to expand the size of the theatre’s interior. For the inside, these panels feature two viewing boxes, yes like the one often featured in the Muppets. On the subject of the Muppets, many people have noted this set is perfect as a base to create a Muppets-themed build. 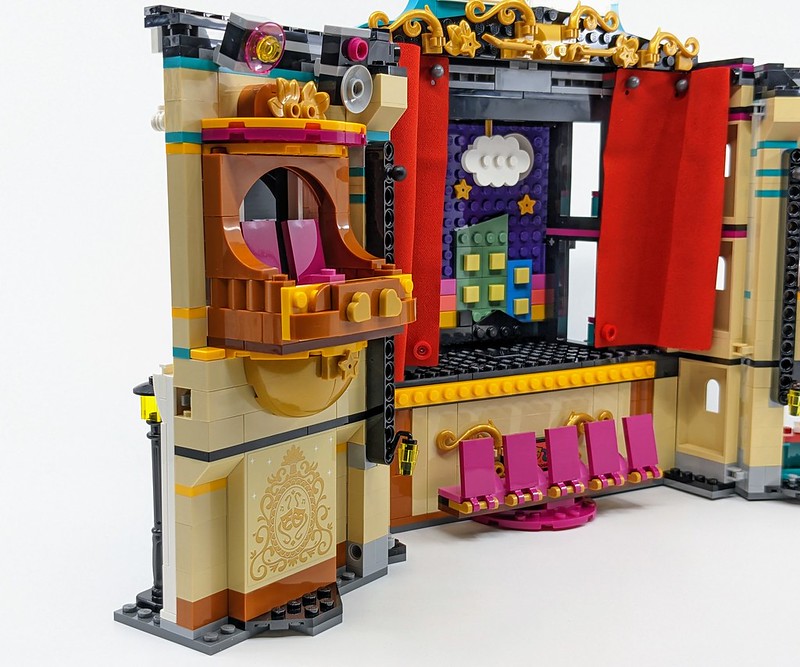 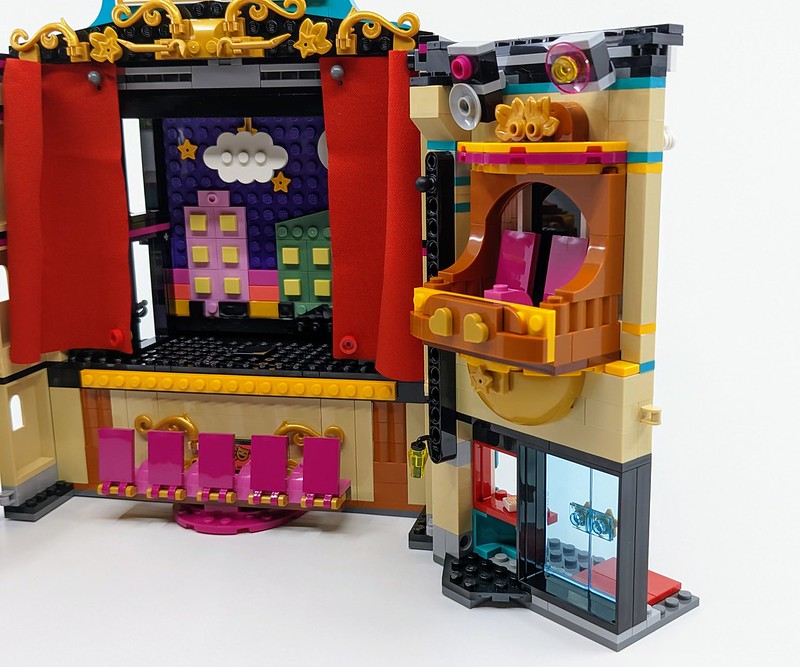 Those side panels also double up to create the exterior facade of the theatre. The outside of the theatre has an old-fashioned appearance, with ornate white pillars bordering a trio of show posters. There’s also a rather small box office window. I do like all the little flourishes used to add detail to the exterior, especially the little hearts and blueish green trim of the walls. 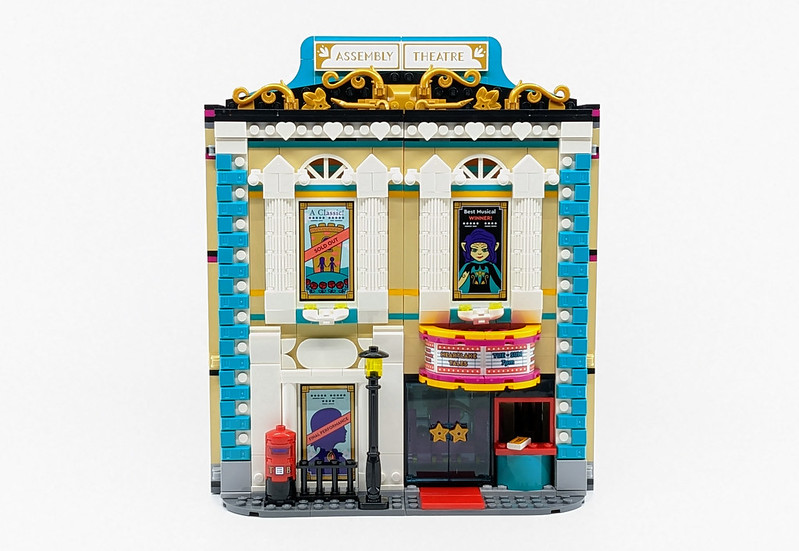 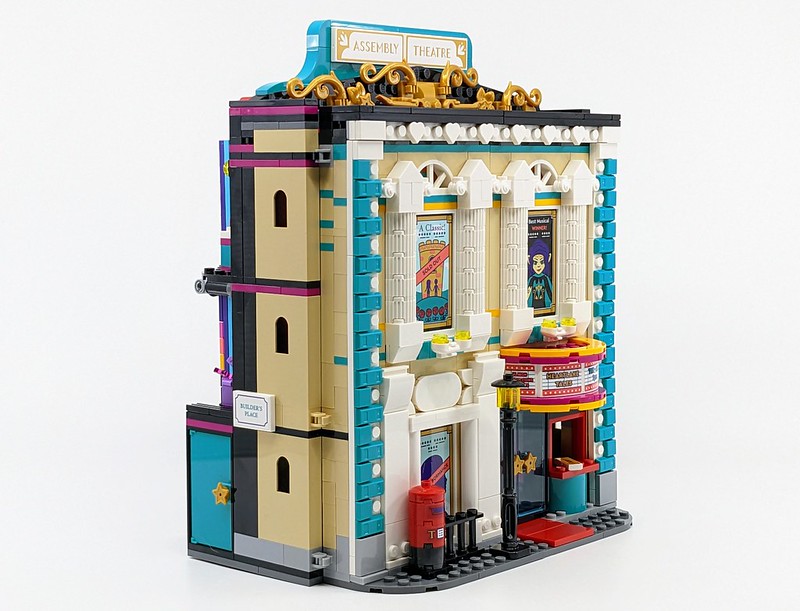 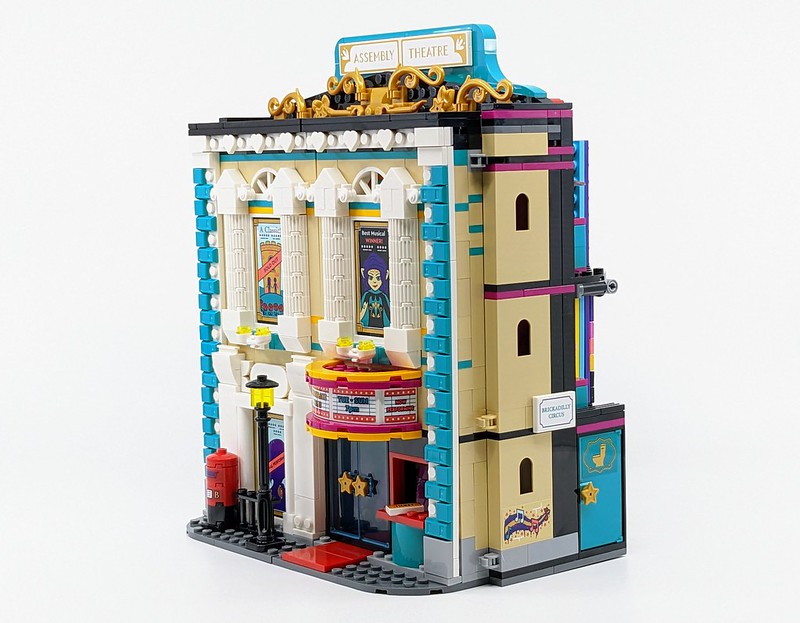 Mini-dolls inhabit the Friends sets and although they aren’t as appealing as minifigures, they work for the theme. One thing with has become with recent sets, including this one, is the effort to expand the cast of characters found in Heartlake City. Each of the four characters featured in this set is unique. Andrea is the only known character but this version is only found in this set. The other characters include Ollie, who appears to be an actor. Freya, who is a stagehand and Professor Adrian who seems to be taking the role of a director. They are all nicely detailed, in particular Ollie’s outfit and Freya’s hair. 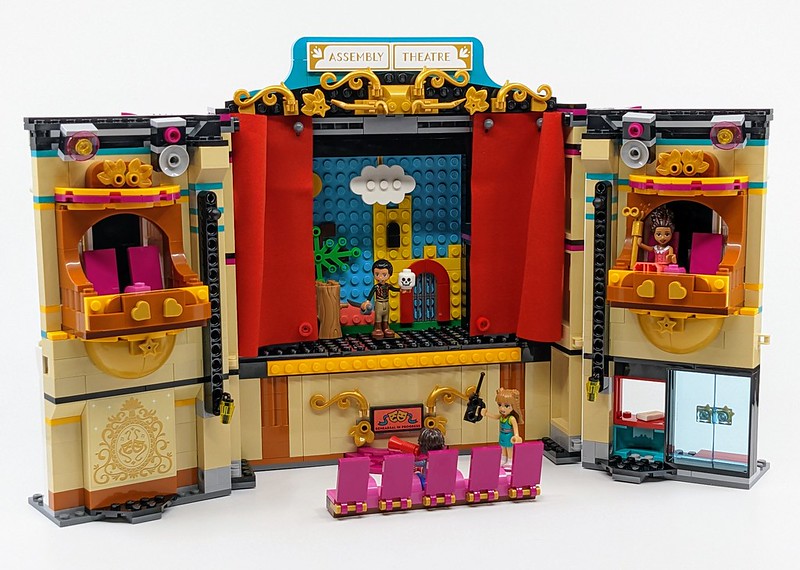 It’s a delightful set and one packed with character and detail. It also offers something unique and different. We haven’t really had anything similar from LEGO Friends or other themes for that matter, so it’s unique in that sense as well. But looking beyond the unusual colours used across all LEGO Friends sets and the Mini-dolls, this is a very clever set. It’s compact yet opens out to create a fun play area. This also means it has a clever use of space, with every nook featuring something which can be used elsewhere in the set. It’s just a fun little set.

– Needed a couple more characters
– Some stickers are tricky to apply

This set was requested by BricksFanzand provided by the LEGO Group for review purposes. The thoughts within this review are that of BricksFanz and do not reflect those of the LEGO Group. Providing a set for free does not guarantee a favourable opinion of the set.