Over the last few years, LEGOLAND® locations have been offering exclusive sets based on areas of the LEGOLAND parks. These have included buildable versions of the Fire Academy, Driving School and NINJAGO rides, as well as a large LEGOLAND park playset. The 2021 LEGOLAND exclusive set is the LEGOLAND Water Park, which includes four Minifigures, a baby figure and a buildable water attraction. The 360-piece set is available online now in select countries and will appear in various LEGOLAND and LEGOLAND Discovery Centre locations over the next few weeks. As many parks are currently closed, some have set up digital stores so you can buy the set online, check your local attractions websites for details. Thanks to the wonderful folks at LEGOLAND UK, I’ve been able to track down a set, so here’s my review. 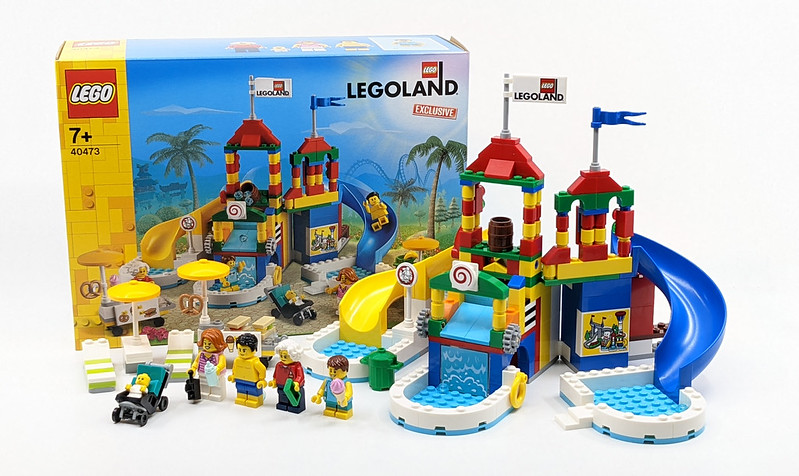 LEGOLAND® fans aged 7 and up can relive the thrills and chills of their favorite water park with this fun build. It’s packed with details from the real water park including the tower, 2 slides, tip bucket, 2 pools, a shower with lockers, a garbage can, 2 recliners and a side table, plus a wheeled café. The 4 LEGO® minifigures include an employee, plus a mom, dad and boy in swimwear. There’s a cute baby figure with a stroller and bottle and the set also features the iconic park map and stickers. 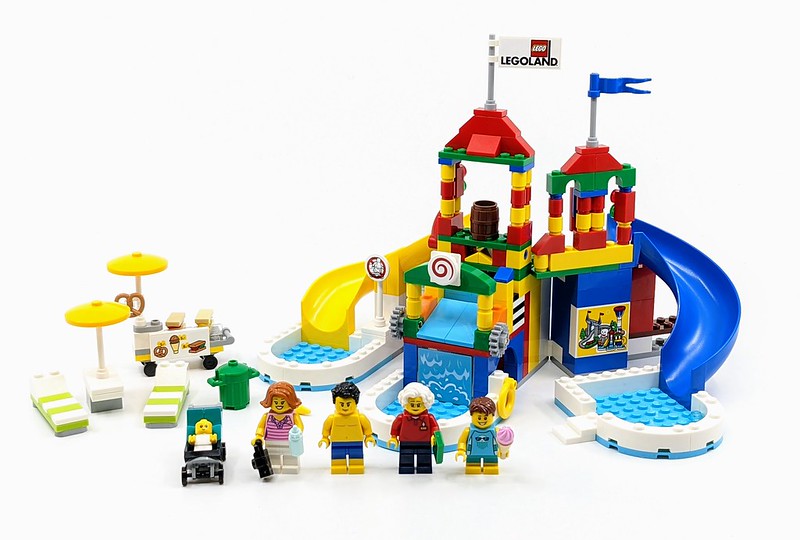 The set is generic recreation of the water-filled areas found in a number of LEGOLAND locations around the world. Although it is more similar to overseas parks as LEGOLAND Windsor’s water offering is DUPLO-themed. Despite the generic amalgamation of the set, you can instantly tell it’s a LEGOLAND set. The use of colours, cogs and flags are all quintessentially LEGOLAND. 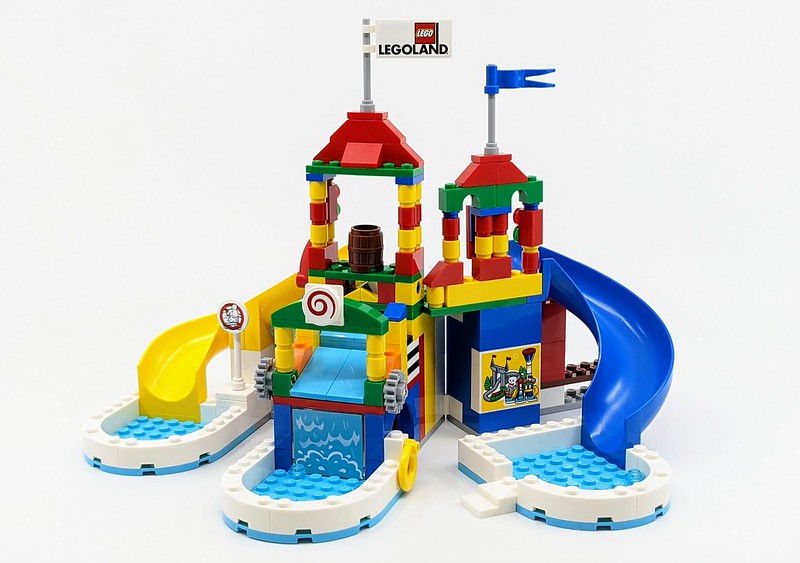 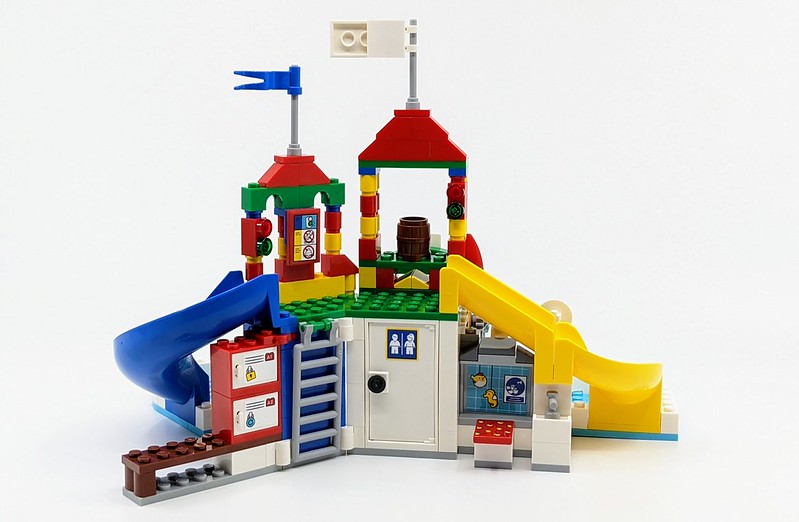 The basis of the set is a couple of water slides, one of which is only found in blue in this set and a trio of water pools and that all-important tipping bucket of water, which is featured in most LEGOLAND water areas. Around the back of where all the fun is happening you’ll find a toilet and changing area. 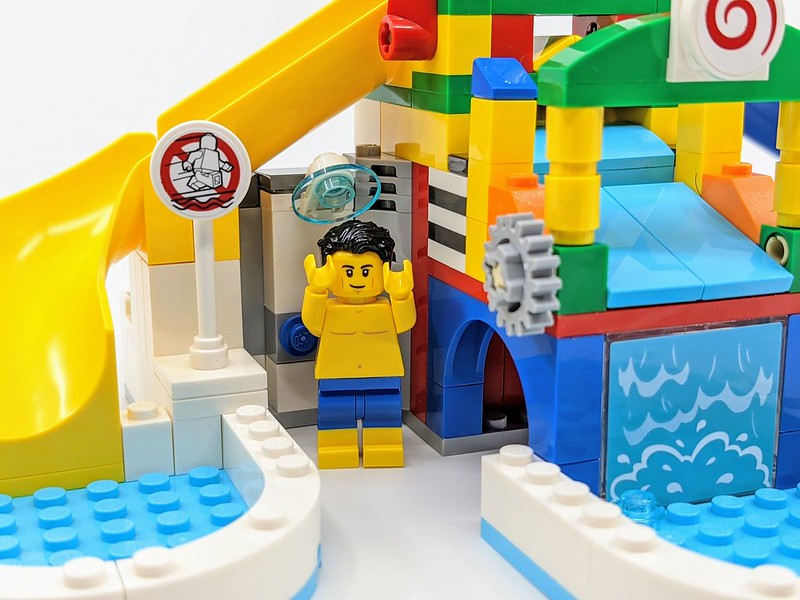 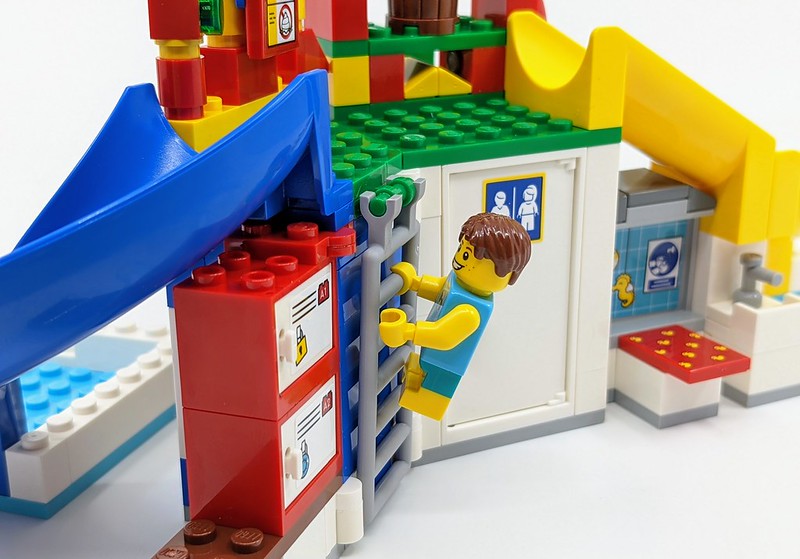 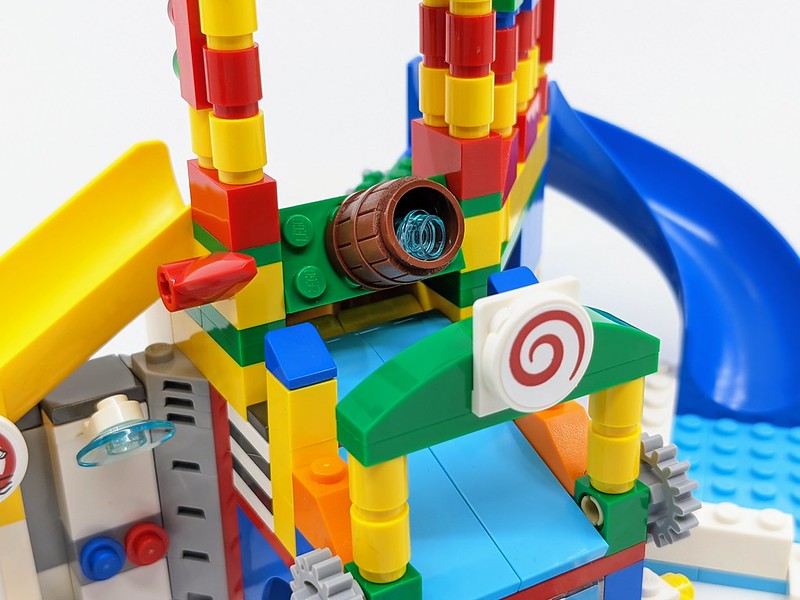 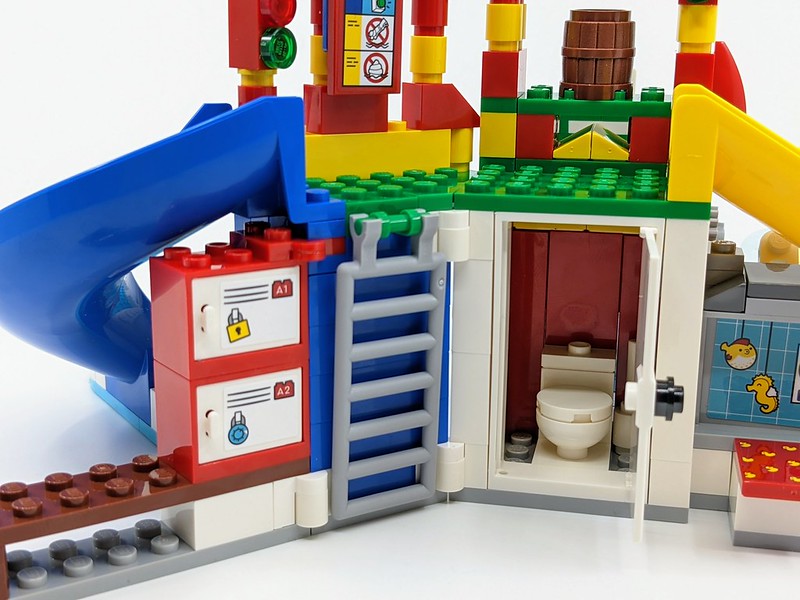 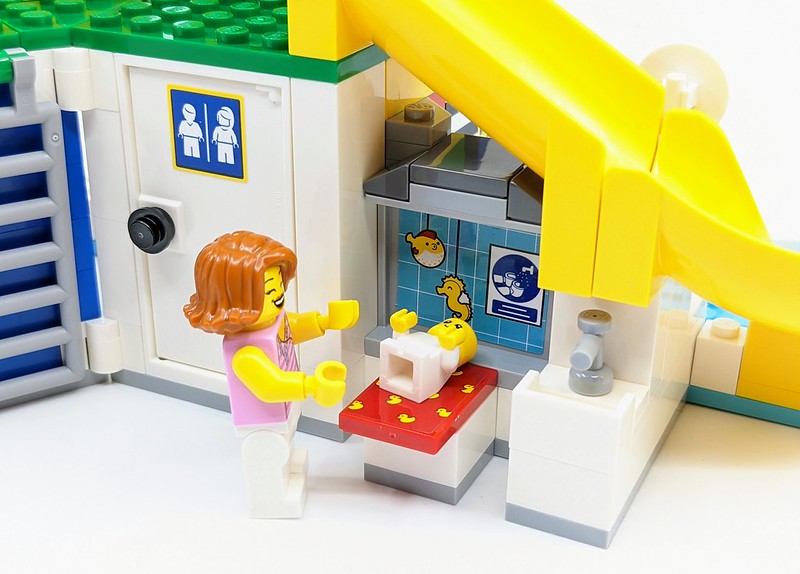 There are a couple of additional builds to accompany the main water area. These include a pair of sun lounger, parasol topped table and a refreshments cart. There’s also a pushchair that uses some very retro elements. I guess these expand the play aspect of the set but in all honesty, add very little to the set overall.

Much of the graphic detailing is achieved by stickers. These include the LEGOLAND flag, a map of the park which ties nicely to the largest LEGOLAND Exclusive Park set and the best sticker of them all is a ‘rules’ sign suggesting pooing in the water area is frowned upon. Other stickers pieces include a ‘no running’ sign, along with a couple used in the toilet and changing area. 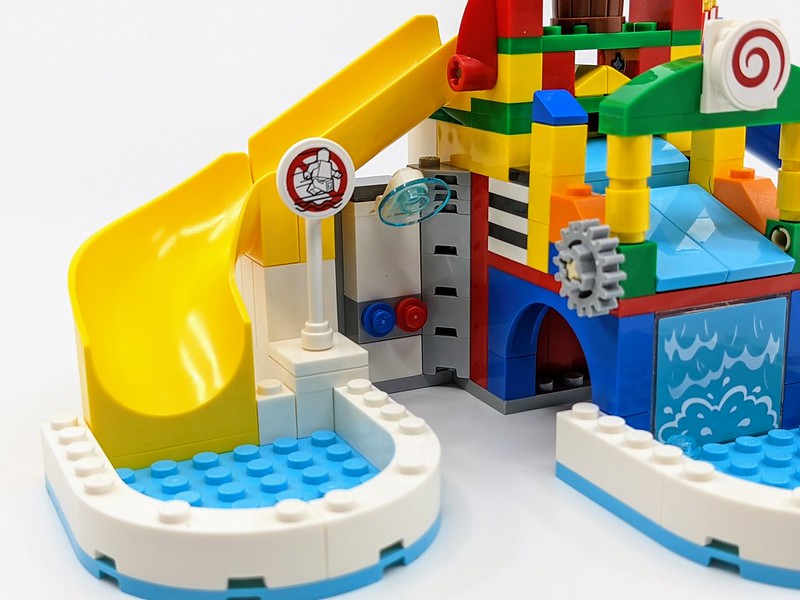 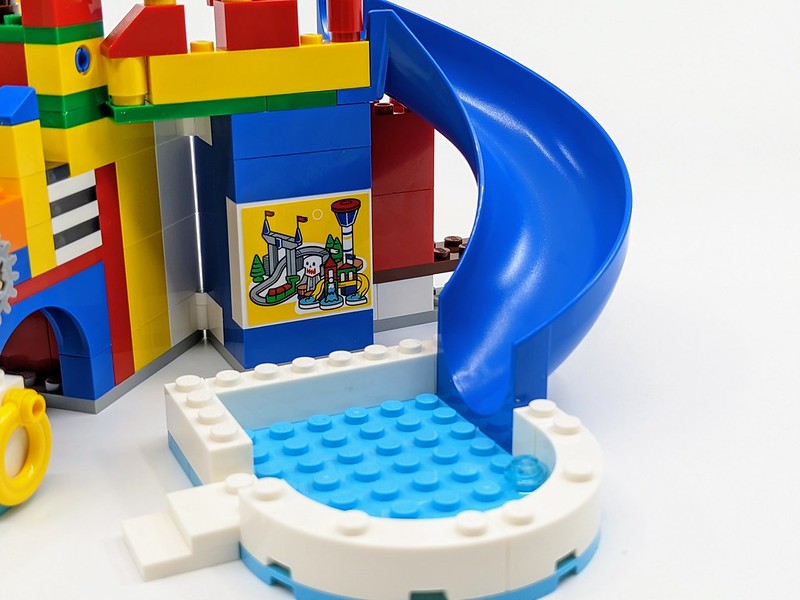 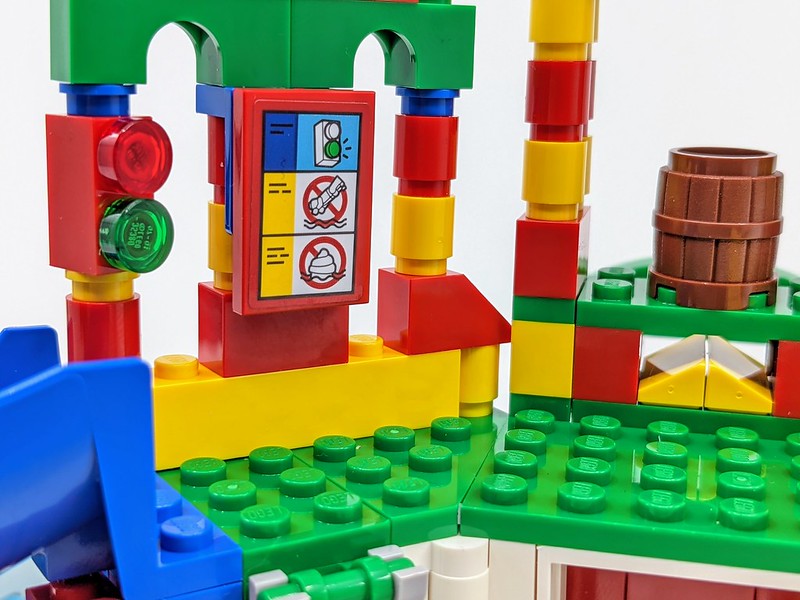 The set includes four Minifigures as well as a baby figure. These are fairly generic in a similar fashion to some of the LEGO® City sets. They include a female and male character, a young boy, a park employee and a little baby. There are a couple of noteworthy things about the Minifigures. I like the fact that the park employee is an elderly lady, her torso has only appeared in a couple of other LEGOLAND sets. The shirtless torso and the torso the young lad is wearing is currently unique to this set.

These LEGOLAND Exclusive sets are a mixed bag, I think there are a little pricey compared to some other LEGO sets. However, they are a far more exciting memento of your day at a LEGOLAND attraction than say a soft toy or fridge magnet. It’s a shame some of the elements aren’t printed as they are quite fun, especially the ‘pooping in the pool’ one. You’ll be able to find the LEGOLAND Exclusive Water Park set in LEGOLAND park and Discovery Centre stores now or shortly after they reopen. Some regions are also offering the set online. Although I still had to purchase the set, I must thank the Online Team at LEGOLAND Windsor for creating a special order for me. 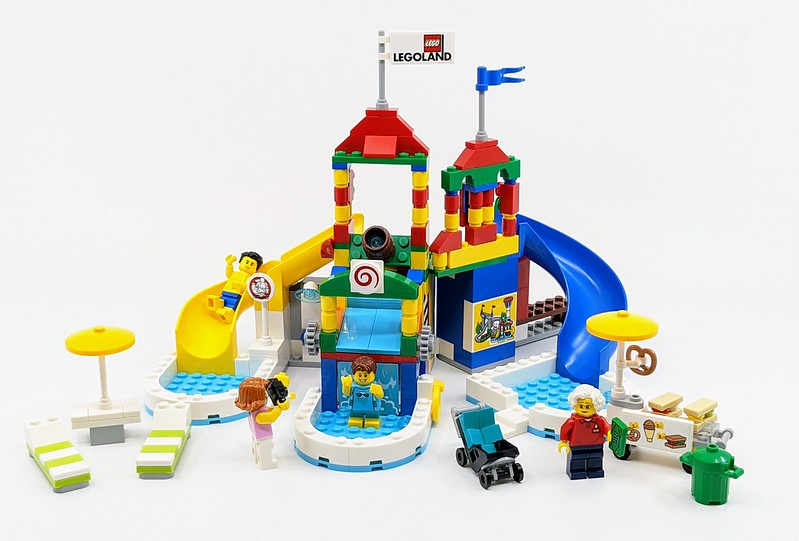