One of the most popular attractions of the various licensed LEGO® sets is definitely the Minifigures. In recent years the ability to expand the wealth of characters has been helped by what are commonly known as Minifigure Accessory Packs. The Marvel universe has been well serviced by the Minifigure Packs, with three sets featuring Marvel characters released since 2019. The third of those packs has just been released and features two unique Minifigures, including one character making its first-ever Minifigure appearance. So here’s a look at the Spider-Man Vs. Venom & Iron Venom set. 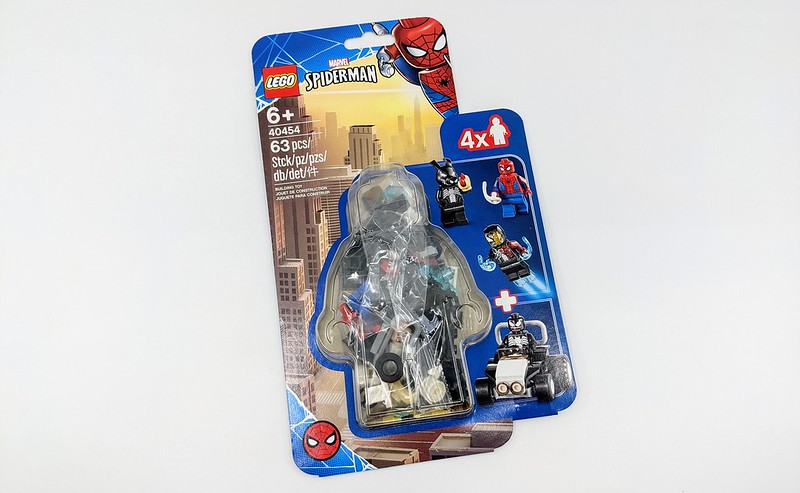 Marvel movie fans will love this action-packed playset with popular superhero characters and a supercool vehicle. The 4 LEGO® Marvel minifigures include the amazing Spider-Man, plus 3 awesome villains – Venom, Pork Grind and Iron Venom. The bad guys race around causing chaos in the Venom buggy. Spider-Man and Iron Venom are armed with power blasts – and Pork Grind has 2 hotdogs!

Although the focus of the set is the four Minifigures it contains, there are other things included with them. These include a couple of accessories such as hot dogs and power blast elements. The hot dogs are a particular point of concern as they are Pork Grind’s, unless they use meat-free or beef sausages? The main buildable element is a small vehicle, I believe it’s a rule that all Spider-Man sets must feature a random vehicle. This time around its Venom’s set of wheels included. The small buggy-like car matches the colour of Venom, using black and white elements. It’s a fun little minibuild, the only thing I would have added in possibly a Venom-theme decal to the front of the buggy. 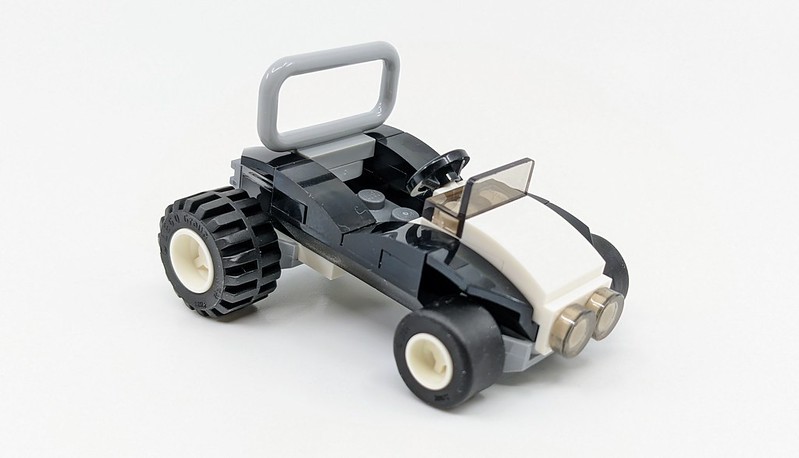 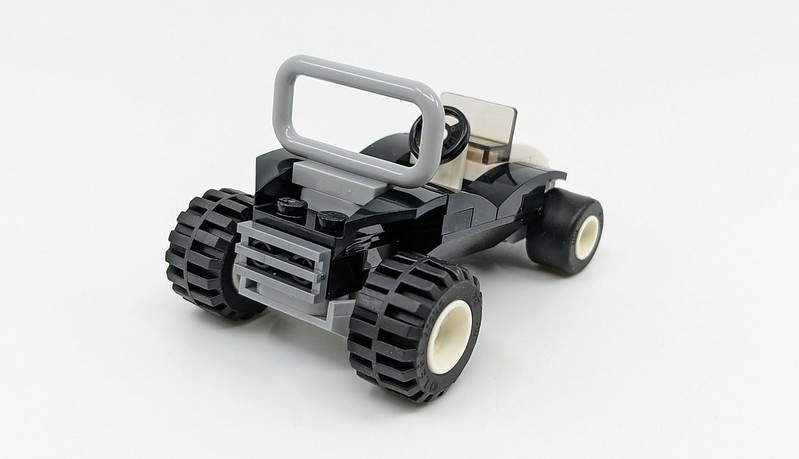 There are four characters included in the set. Two of them are rather well-known Marvel creations, namely Spider-Man and Venom. These use the most recent versions of the Minifigures, with Spider-Man having print on the arms, which is new for the 2021 version. Venom is the same design that’s been used since 2019. But the draw of the pack is the other two characters. Iron Venom, as the name suggests is a Venomised version of Tony Stark’s famous iron armour. 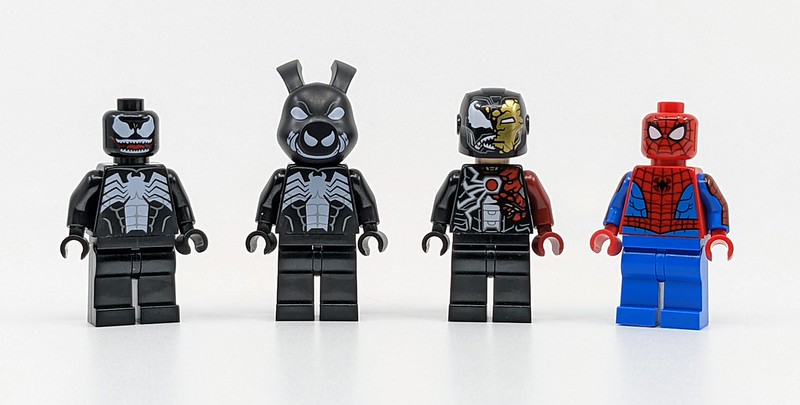 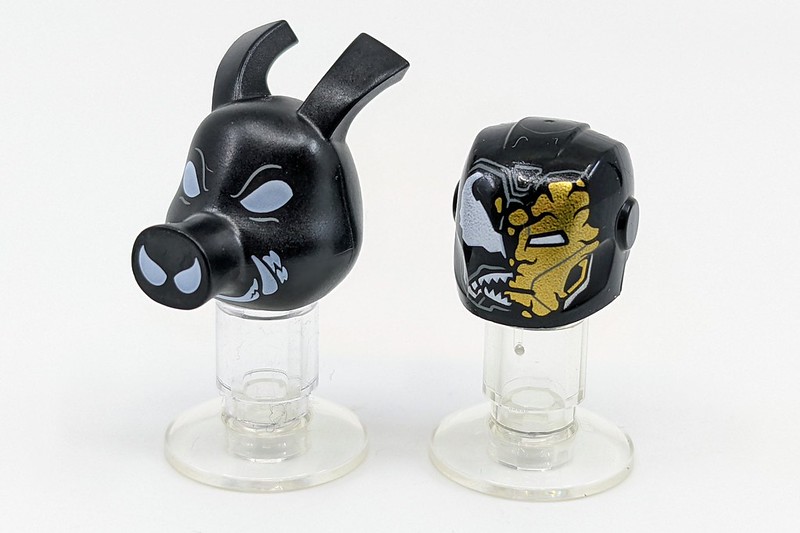 The character has previously been featured in Venom Crawler set from last year. Although it uses the same torso, which shows the Iron Man armours being enveloped by the alien Symbiote, the helmet is totally unique to this set. The element is the single helmet piece used for most of the recent Iron Man Minifigures, but instead of it being completely taken over by Venom, it matches the torso to show a bit of the Iron Man design as well. The final character is extremely obscure, Pork Grind is a Venomised version of Spider-Ham, who was once a spider, which was bitten by a radioactive pig. This piggy variant of the webbed wonder became prominent thanks to the animated Into the Spider-Verse movie and appeared in a Spider-Man set last year. Pork Grind uses the same unique head element as Spider-Ham, now is black and with Venom-styled detail. 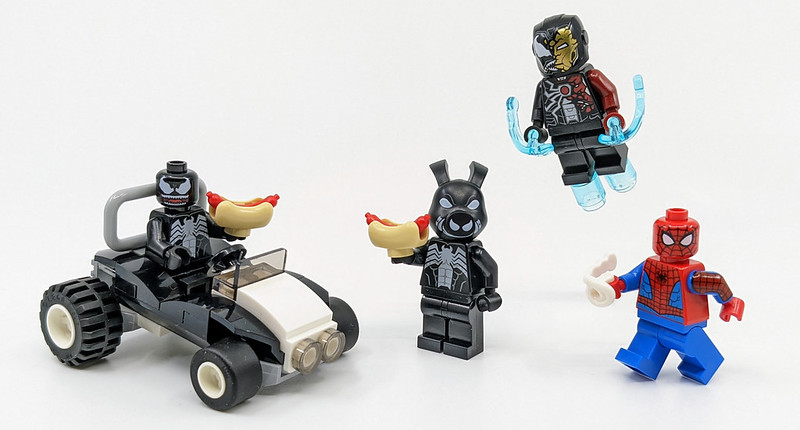 Although the cool little car may seem a little underwhelming, the focus of the set is most certainly the Minifigures. Sure Spider-Man and Venom have both appeared in multiple sets before this, but it’s the inclusion of Iron Venom and Pork Grind which makes this Minifigure Pack a must for Minifigure collectors and Marvel fans.