This September LEGO® are offering a pretty cool little gift with purchase set from the Hidden Side theme. This brand new story-driven theme has the residents of the small coastal town of Newbury, overrun by a hidden force of spooks. In order to carry out their ghostly going-ons, these hidden spooks are taking over people and turning them into Gloombies. Joining the currently available eight retail sets is this special mini set, a funky little Juice Bar. But is it all that it seems? Let’s take a closer look at the free Hidden Side Newbury Juice Bar set. 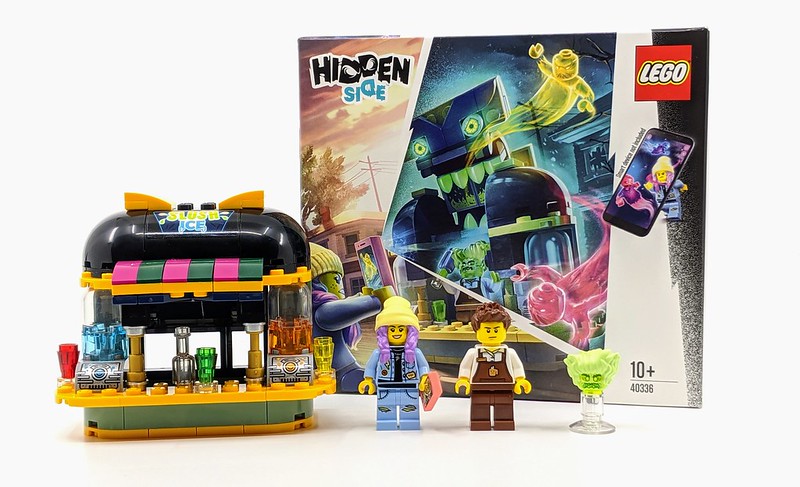 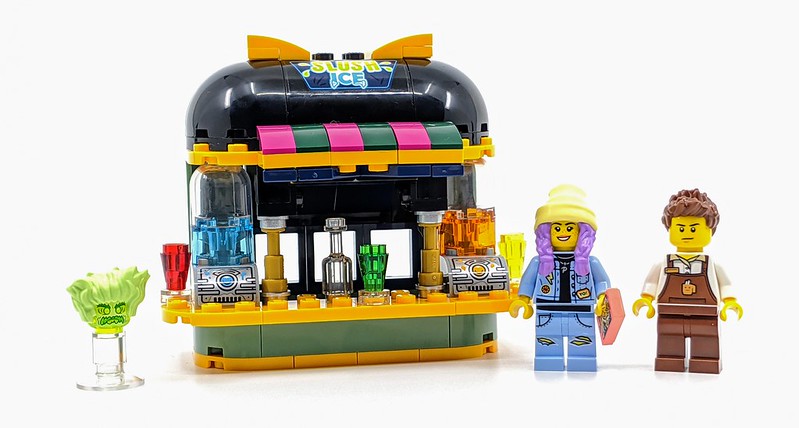 Despite Newbury having its fair share of retro style building, the Juice Bar is quite modern looking. The building is a small kiosk style bar, like something you’d find at a fair, in a shopping centre or on train station platform. It has a unique colour scheme of black yellow and sand green. Which is certainly different to most of the other Hidden Side sets, although the sand green does tie in nicely. The countertop is built into the overall structure of the bar, with two blenders also acting a pillars to connect the roof to the base section. Both blender bases have stickers on them, which look very nice. I love the dome-like roof especially how the boe plates sit upon the same coloured 1×2 tiles. Only thing I’m not a big fan of here is the Slush Ice sticker. I’d rather it had a pun tastic name or simply ‘Juice Bar’. 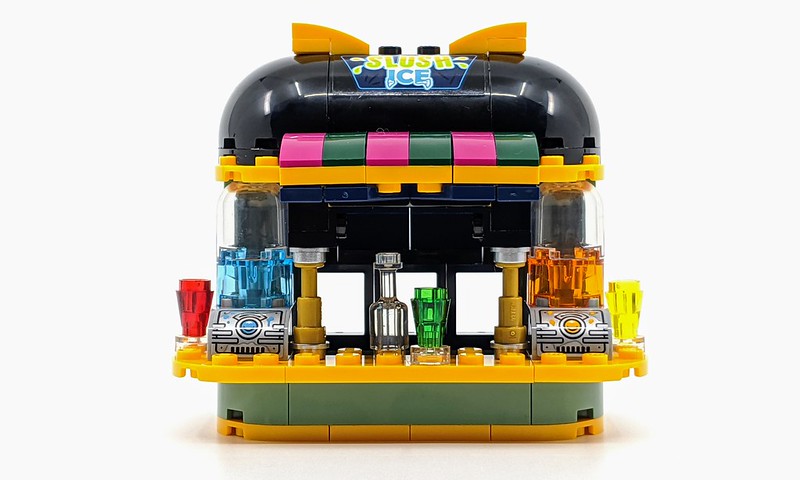 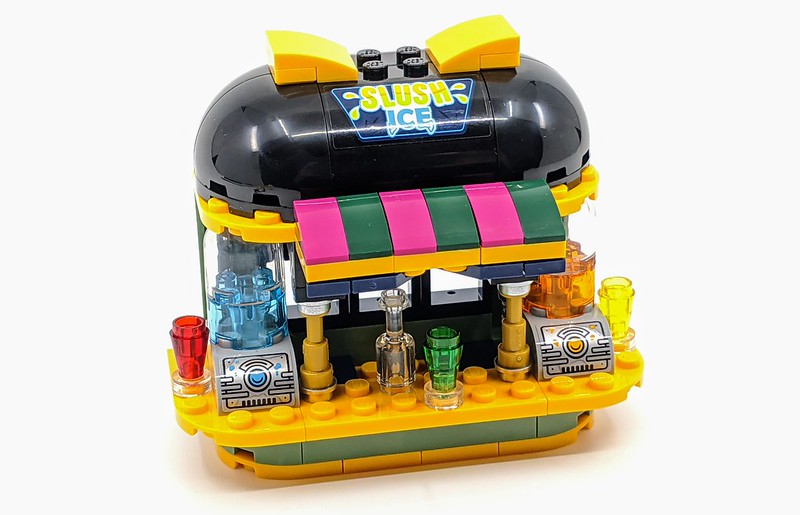 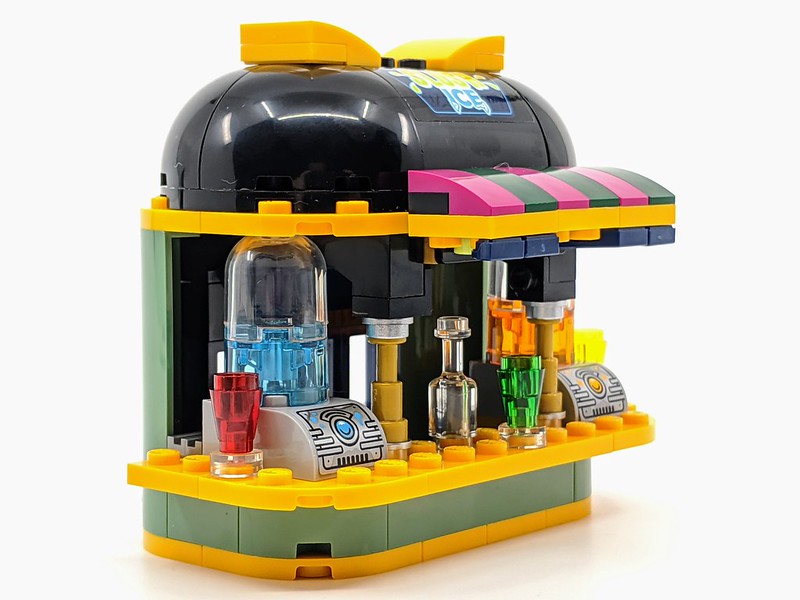 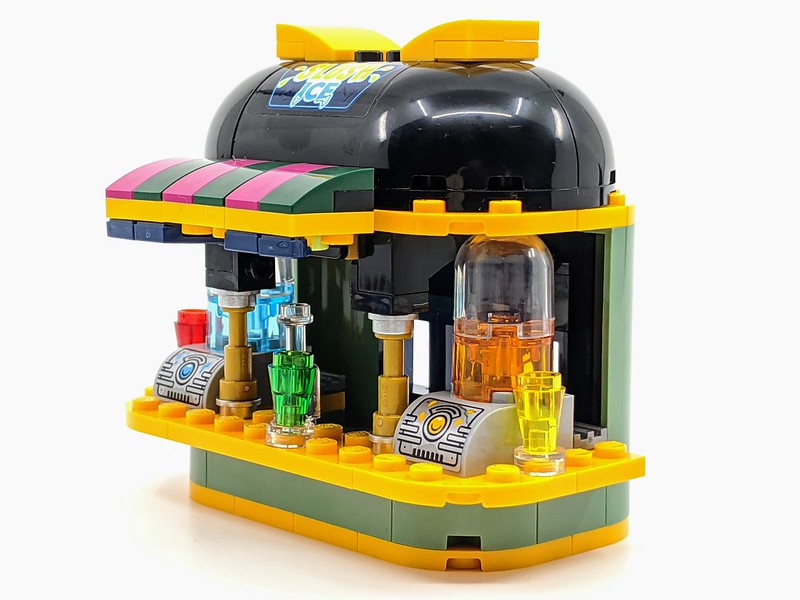 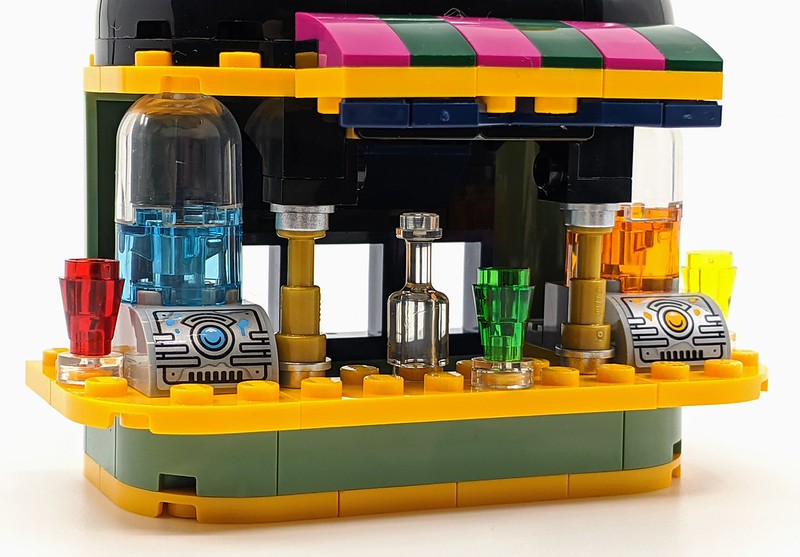 But the Juice Bar is not just a Juice Bar, it’s also possessed by the Hidden Side. This can manifest itself in numerous ways from taking over Minifigures to transforming buildings. Flipping up the centre section of the roof where the awning sits, reveals a ghostly face. This features a mix of stickers, printed pieces and a couple of lime green elements, including a rare lime green set of teeth. This is one of my favourite transformations as it’s well hidden when the Juice Bar is in its normal form. 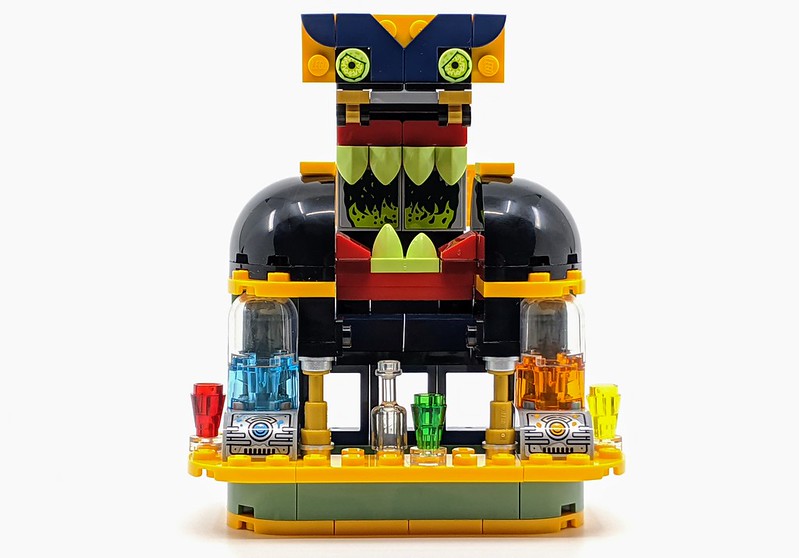 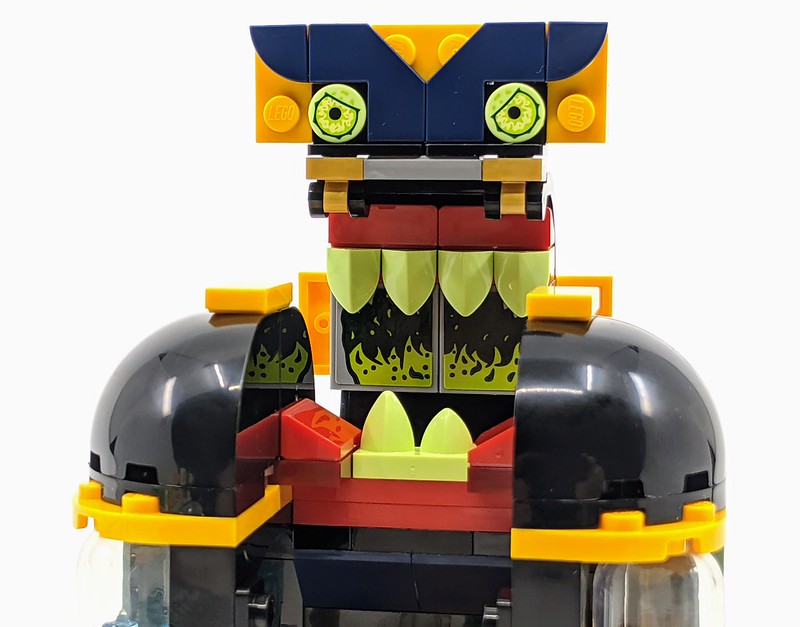 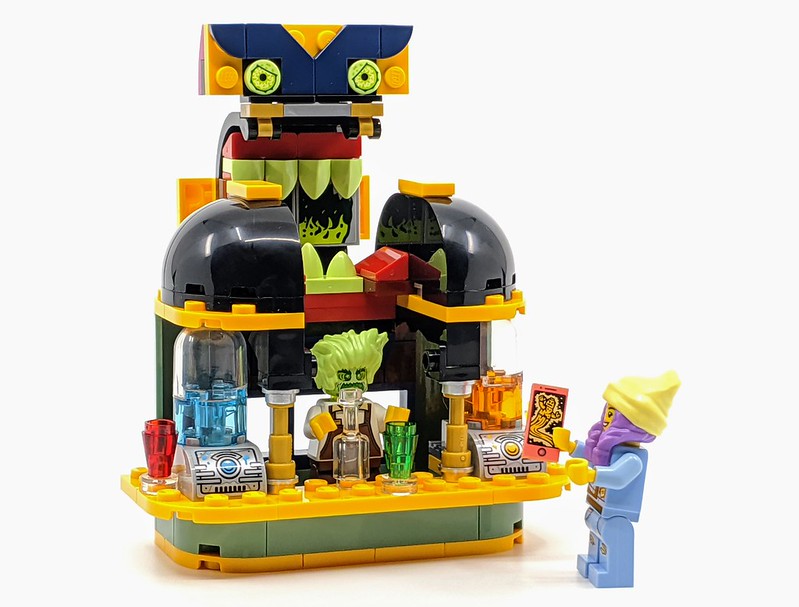 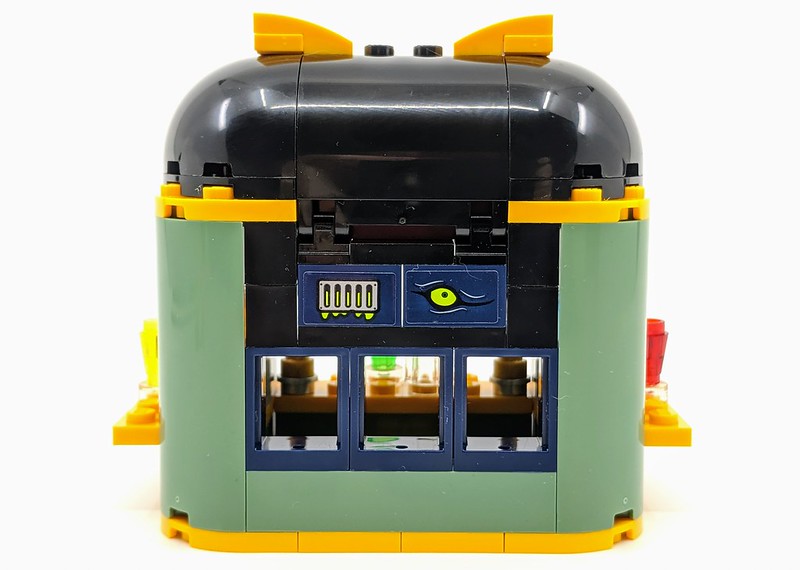 The set only includes Minifigures – Parker and Rocky. Parker is one of the most common Hidden Side characters, and has appeared in a number of other Hidden Side sets. This particular version has appeared in set 70424: Ghost Train Express. I really like Parker’s outfit, it features plenty of detail, especially on the jacket. She also has two expressions and that all important printed 1×2 tile to represent her smartphone. Parker is joined by an exclusive Minifigure in the form of Rocky. Although exclusive to this set in the overall Hidden Side range, the Minifigure is made up of part readily available in other sets. The torso has appeared in a few City sets and is a little similar to Larry the Barista’s from The LEGO Movie and includes the same smiley coffee cup logo. 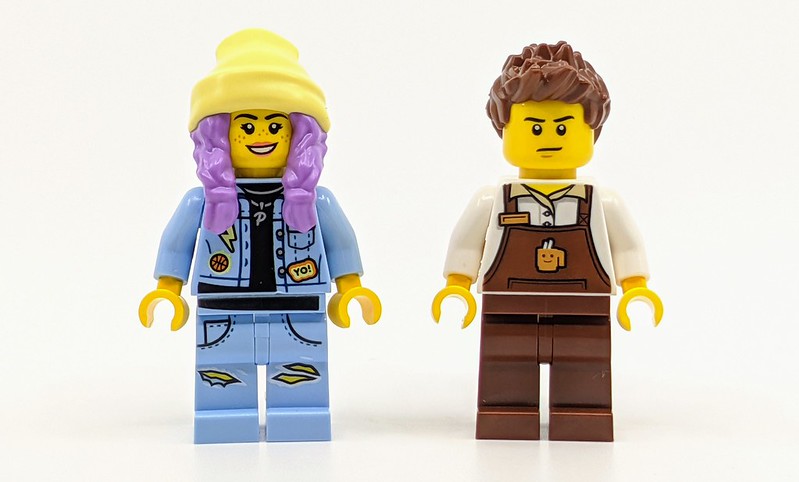 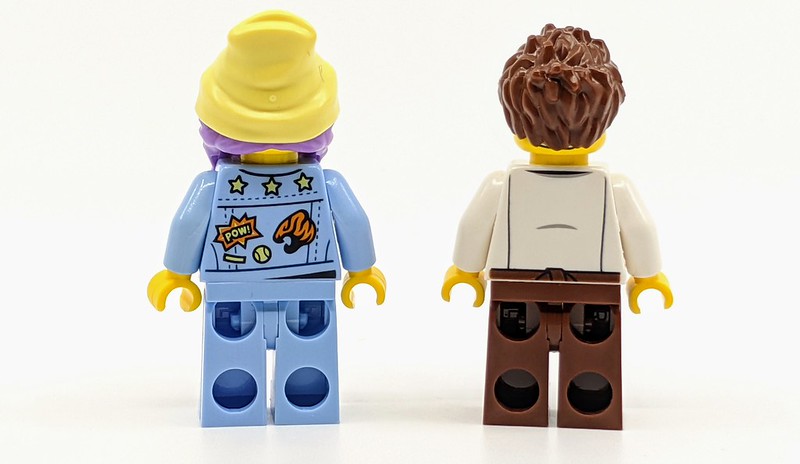 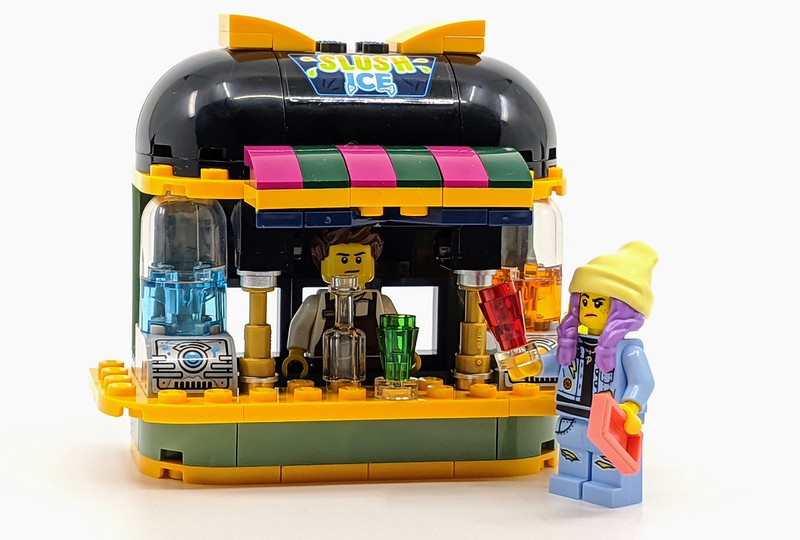 Rocky has the unfortunate honour of getting gloomed up. A quick switch of the head and hear turns Rocky into a Hidden Side Gloombie. The elements to do this have appeared in other Hidden Side sets, which makes many of the Gloomed character feel quick similar. But considering this is a promotional set it’s nice to have one included even though it not very unique. 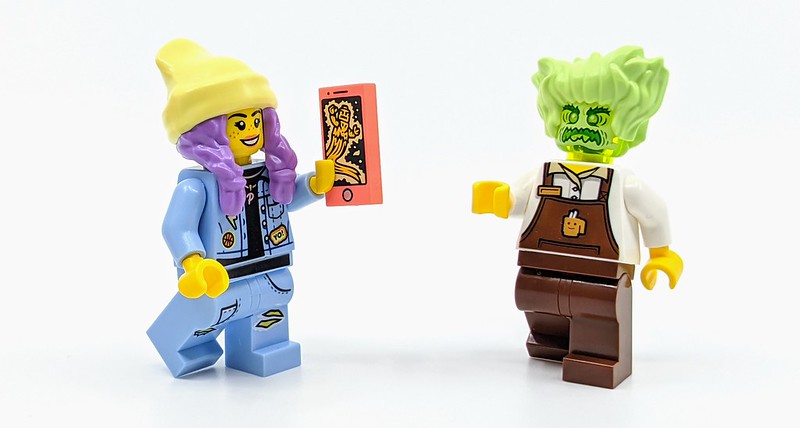 Getting Hidden Side sets into the hands of people who wouldn’t necessary buy any is a great idea however I feel LEGO missed a trick by not including any AR functions. Although a small set, a simple colour wheel could have been included to allow people to experience the AR functions. You can scan the Minifigures using the app, but it’s not the same as bringing a set to life, like you can with other Hidden Side sets. AR aside, as a free gift this is quite a decent little set, it doesn’t really match up with any of the other sets but it’s certainly a fun little set. 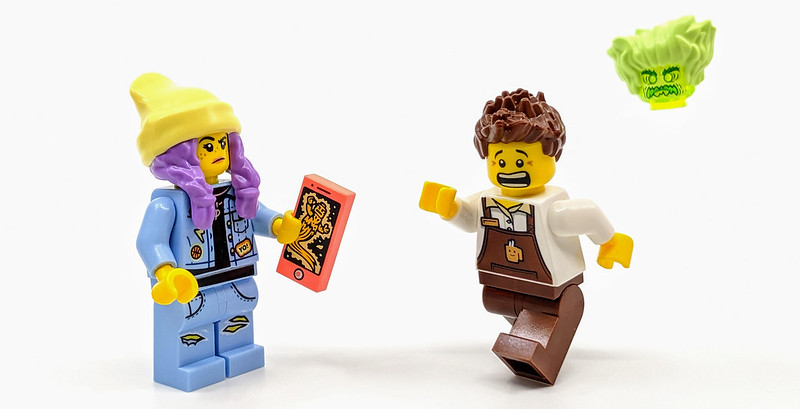