For the next Creator 3-in-1 Summer set reviews, it’s time to take a trip to the funfair. Exciting fairground rides have become a popular addition to the LEGO range of sets. They have been mostly found in the old Creator Expert line, where we have been treated to roller coasters, haunted drop towers and a big old Ferris Wheel. These impressive feats of LEGO engineering have provided us with some amazingly sized and intricate builds, but is big always better? Set 31119 is out to prove just that. Grab your ticket, strap yourself in and get ready to ride the Creator 3-in-1 Ferris Wheel. 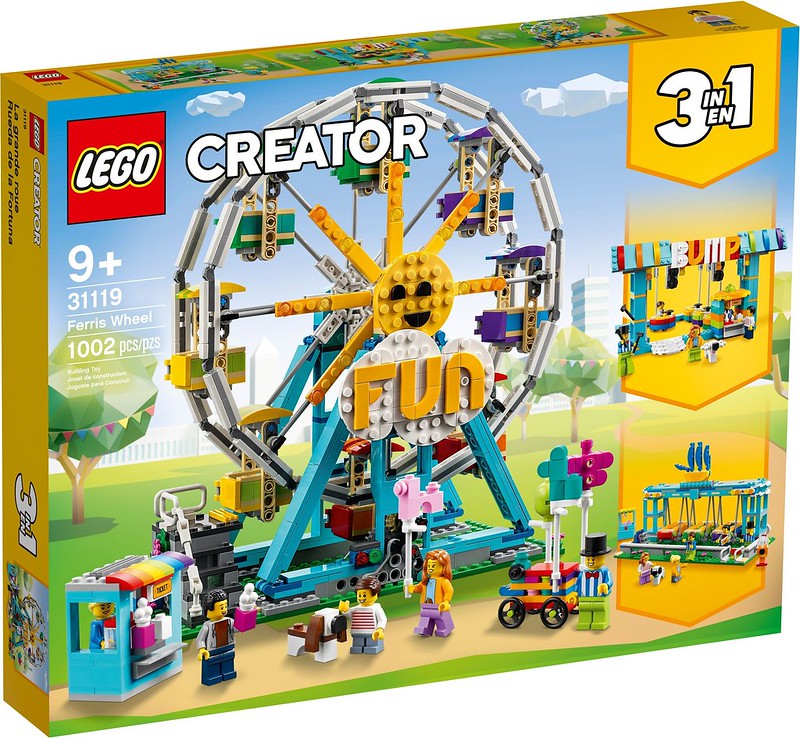 Kids can enjoy a fun-filled day out at the fairground with this brilliantly detailed LEGO® Creator 3in1 Ferris Wheel (31119). This toy construction set features a rotating Ferris Wheel with 8 gondolas, a ticket booth, a balloon cart with balloon animals, 5 minifigures and a brick-built dog.

Awesome toys fuel kids’ passions
The fun never stops as kids can build 3 different fairground rides with this supercool LEGO Creator 3in1 set. They can assemble the Ferris Wheel, rebuild it into a bumper car playset, transform it into a swing boat ride, or use the bricks to create something completely new. 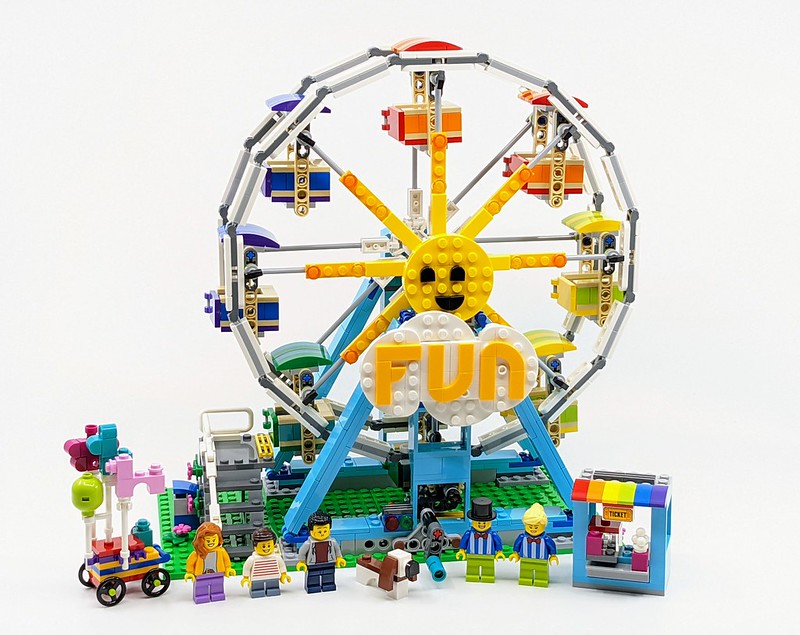 A trip to the fairground can be a fun experience, the rides, the lights, the abundance of fried food. The spectacle of seeing all these weird and wonderful rides is probably why the brick-built versions attract the same interest. One of the most visually impressive of the LEGO fairground attractions is the Ferris or Big Wheel. The structure alone makes it a tricky beast to construct from LEGO elements. I had the pleasure of building the Creator Expert Ferris Wheel a number of years ago and I remember it being amazingly intricate and the various functional elements added an extra depth to the build. So I wasn’t sure what to expect from this much simpler version. One thing you’ll notice straight away is it’s a little more colourful. This is in part thanks to the grinning sun and ‘Fun’ motifs built into the support struts of the ride. An important aspect of a Ferris Wheel is the ability for it to rotate and a simplified form of the function from the Expert Ferris Wheel is reused here. So a small collection of gears power a tyre, which causes the wheel to move around. This is done by a crank handle and is fairly easy to power despite the small contact area and large structure it needs to shift. Although not expressed in the instructions, I would assume a motor could be added. However, the mechanism has quite a lot of give in it, so could be a little too loose to withstand the force of powered elements. 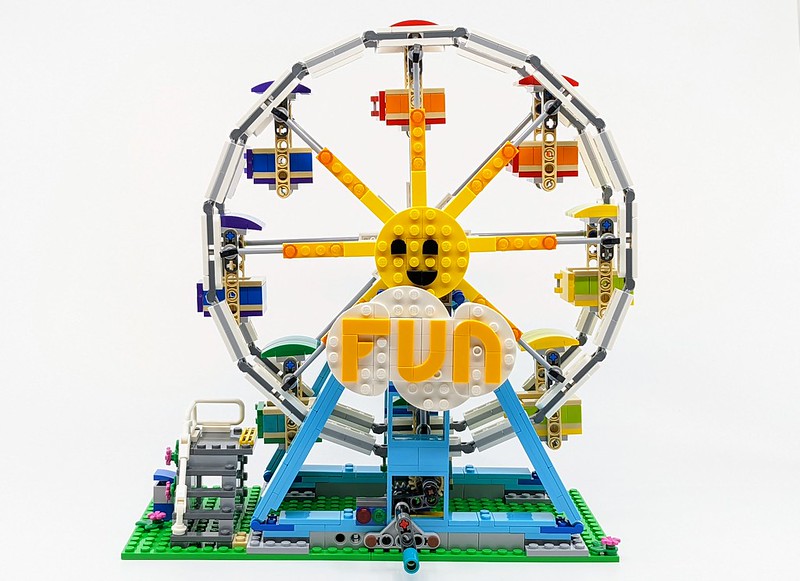 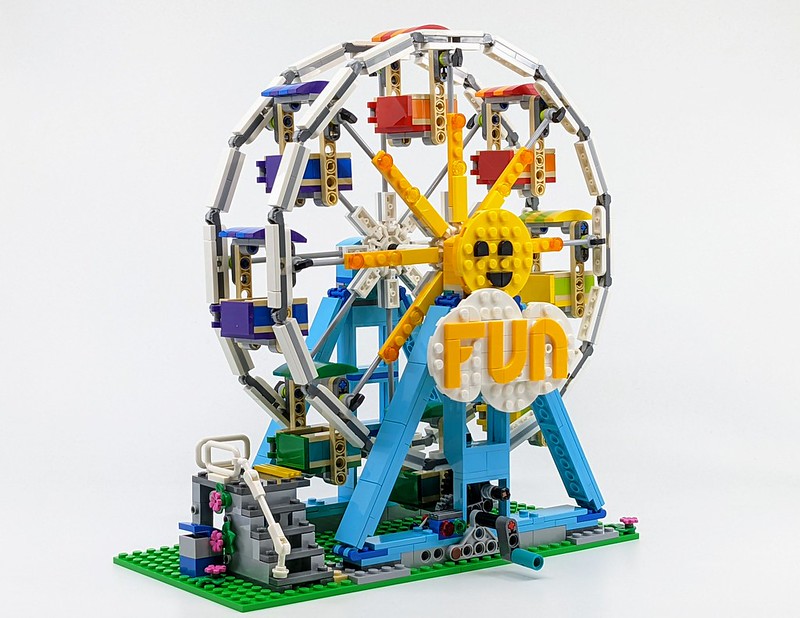 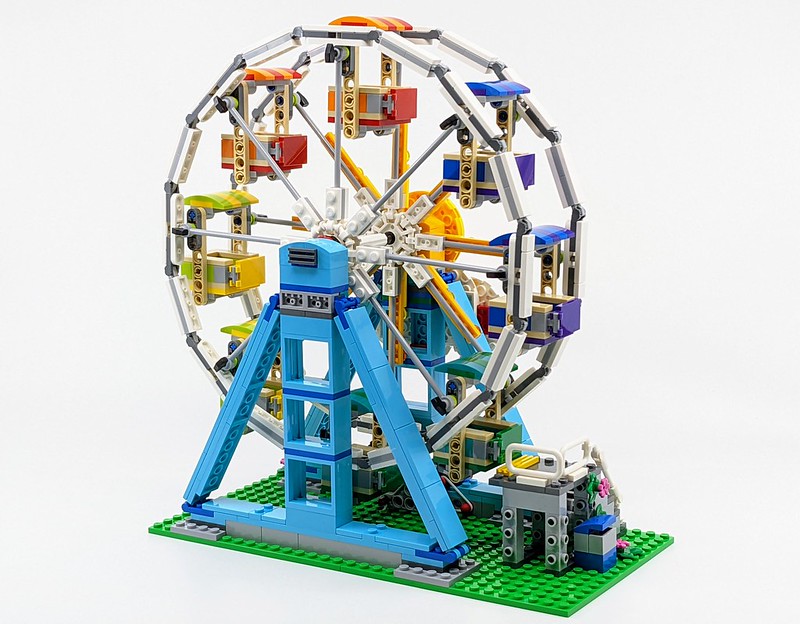 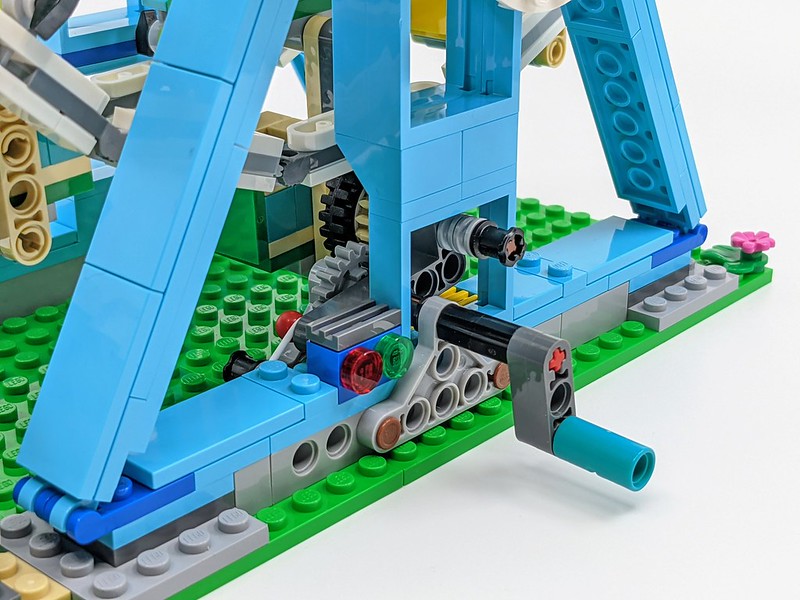 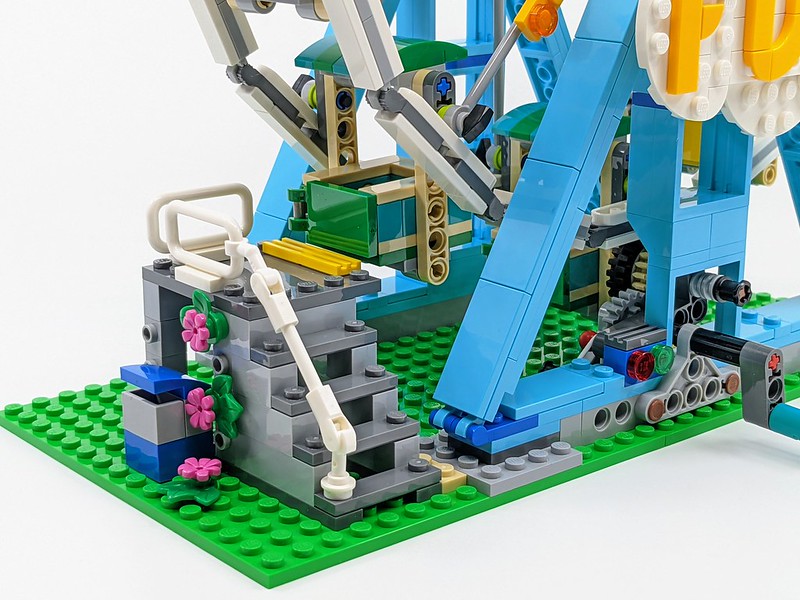 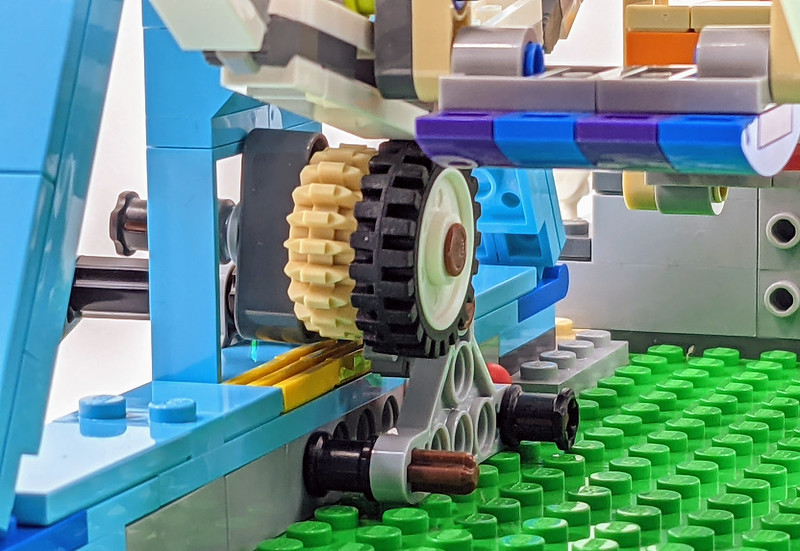 A large focus of the build is the wheel itself and it’s a surprisingly simple if a little repetitive construction. A series of 14 sections strung together use click hinges. These are then placed around a central star-like core. This is made up of a series of spoke-like rods. Once all combined you are left with a colourful wagon wheel-like structure. Two of these are connected to the two support structures, via Technic pins. 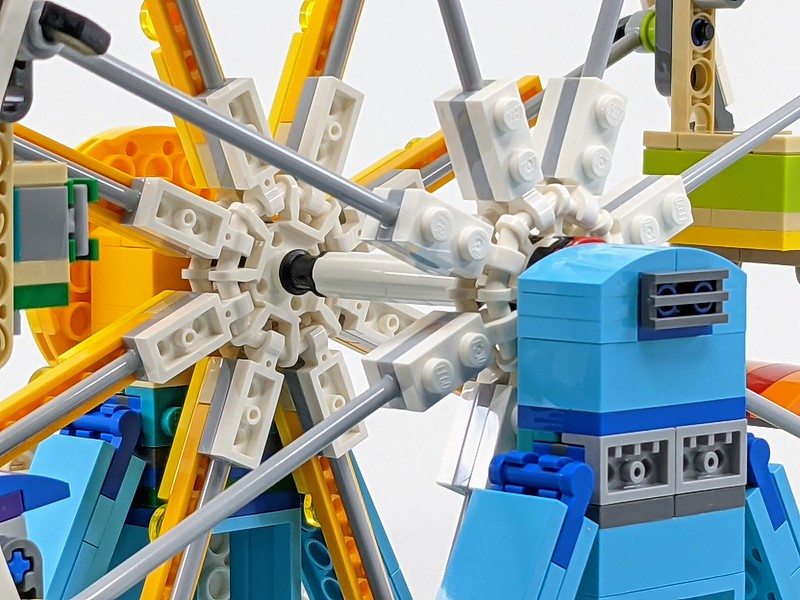 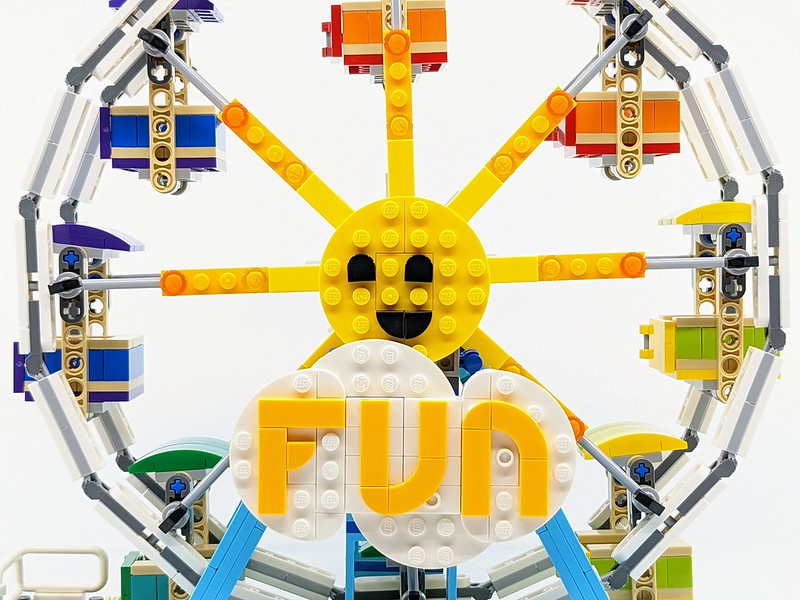 These wheels are then bridged together by eight carriages. These are all built in the same way, in four pairs of colours. They are fairly small but have enough room to place a single Minifigure. These carriages are connected in a clever manner. They directly connect to the outer wheel structure via Technic pins, they are then held securely in place with a hammer tool. Once complete the wheel can be easily rotated by a simple turn of the handle. It’s an impressive feat to move such a big mass of LEGO with a simple tyre and a couple of gears. One thing I would say if the placement of the handle feels a little odd, it would have made a little more sense to locate it behind the ride. Where it currently sits distracts from the rides’ sunny signage. 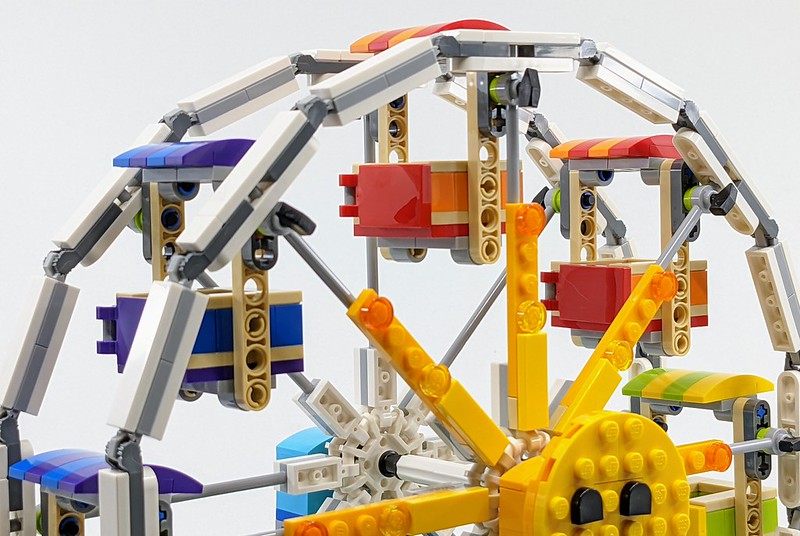 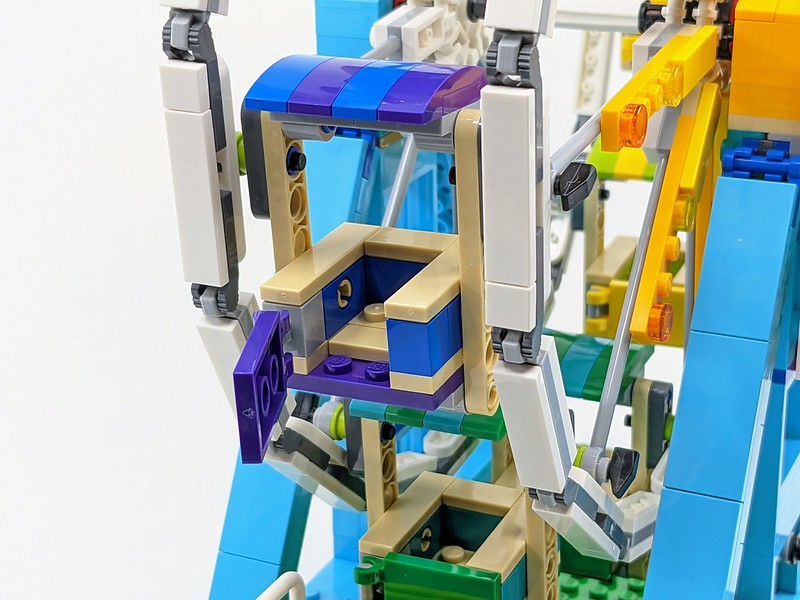 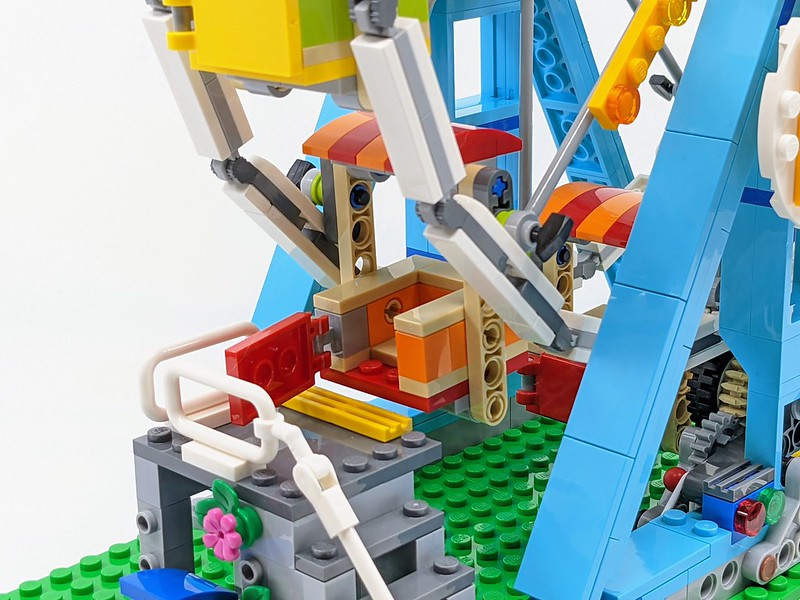 Along with the Ferris Wheel, there are a couple of relevant Minibuilds. These include a ticket booth, with the colourful roof nicely tying to the ride’s carriages. There’s also a balloon cart, which includes various brick-built balloon animals. It’s a shame the various new balloon elements haven’t been used here, but the focus of the 3-in-1 sets are to feature as many elements as possible in order to allow more variety in the alternative builds. This is also the case with the brick-built dog, which honestly looks out-of-place next to the Minifigures. 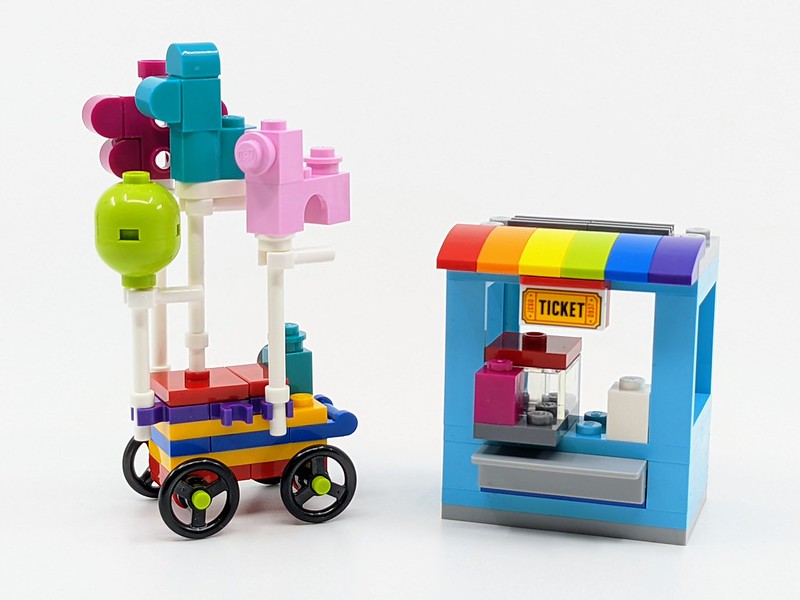 The set includes a gang of five Minifigures, but their inclusion is really a supplement to play, instead of a focal point of the set. The Minifigures include an adult man and woman, along with a child. Plus there are two Fairground workers, what I like about these is their uniform matches that of other similar sets. Which offers a nice line of continuity. 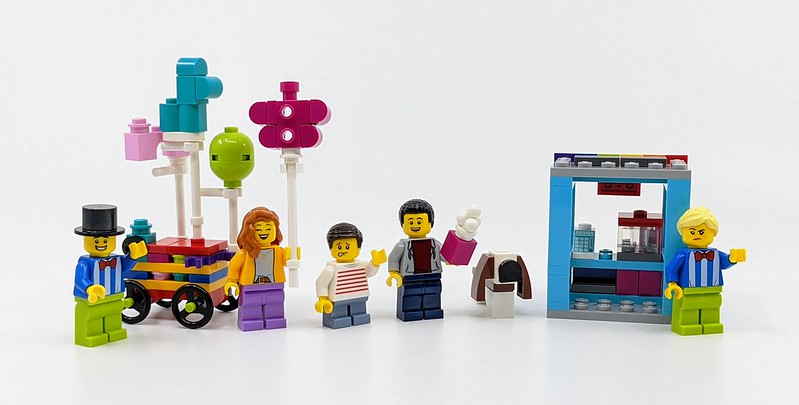 Beyond the hero build, the set can be rebuilt into two alternative builds. These both continue with the fairground theme by offering a swinger ride or a bumper car track. However, the Ferris Wheel is by far the standout of the builds on offer. It will inevitably be compared to set 10247 as that also offers a Ferris Wheel. Although this one doesn’t have the visual scale of its Expert counterpart, it features just as much functional interaction and in all honesty, looks just as more fun. The LEGO Creator 3-in-1 Ferris Wheel set will be available from June 1st and August 1st in North America.