LEGO® Creator 3-in-1 sets offer a build, which is close to how LEGO sets of old use to be. Not tied to a license or story. Often without Minifigures and with the ability to create different builds from the same bricks. One of the smaller of the new 2020 LEGO Creator 3-in-1 sets is another Monster Truck, this time without any delicious treats on board. Instead there are a trio stunt show themed creations, joining the Monster Truck is a Dragster and a Muscle Car. So let’s take a look at the lead build and its rebuilt variants, in my review of LEGO Creator 3-in-1 Monster Truck. 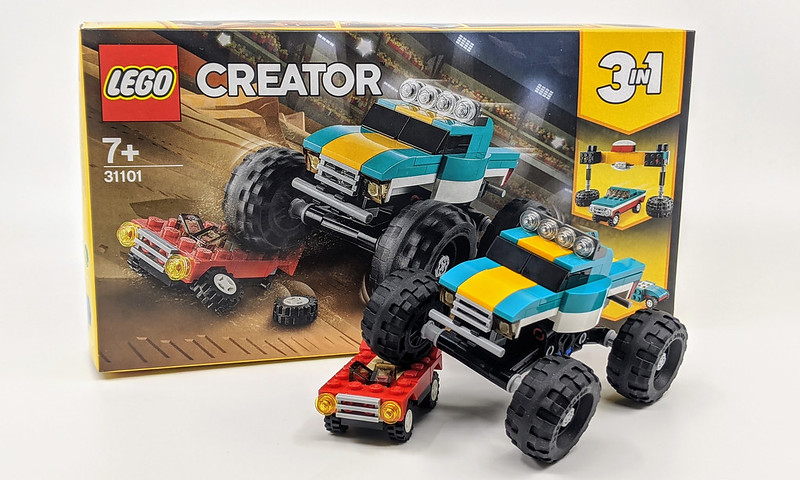 Inspire kids’ passion for massive vehicles with the exciting LEGO Creator 3-in-1 Monster Truck (31101) buildable toy set. They will love powering over any obstacles with this green and yellow monster truck, featuring a working suspension and a small car to roll over again and again.  Open-ended creativity Kids get 3 different build-and-play experiences with this LEGO Creator 3-in-1 set. They can build a monster truck, rebuild it into a muscle car with finish line, a dragster, or create something from their imagination. This cool building toy encourages imaginative play and makes a great any-occasion present or gift for children.  Recognisable models from real life LEGO Creator 3-in-1 sets offer kids models that are detailed and realistic and encourage imaginative play. The models offer endless building and play opportunities while helping to spark creativity in children of all ages. The fun, inspirational sets also make great gifts for kids for Christmas or birthdays. 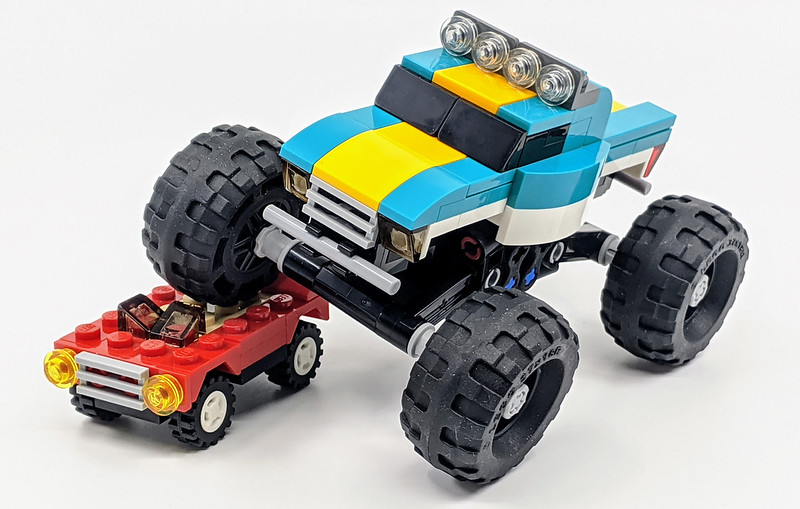 The lead model feature two vehicles, often found in arena stunt shows. There is a Monster Truck and a car, well half a car, it’s seen better day, that was before it met the Monster Truck wheels. The car is built in such a way as it looks like it’s been partly crushed. Two simple clear cheese slopes give the impression of a broken windscreen. I also like the use of the classic wheels, a nostalgic blast from the past. 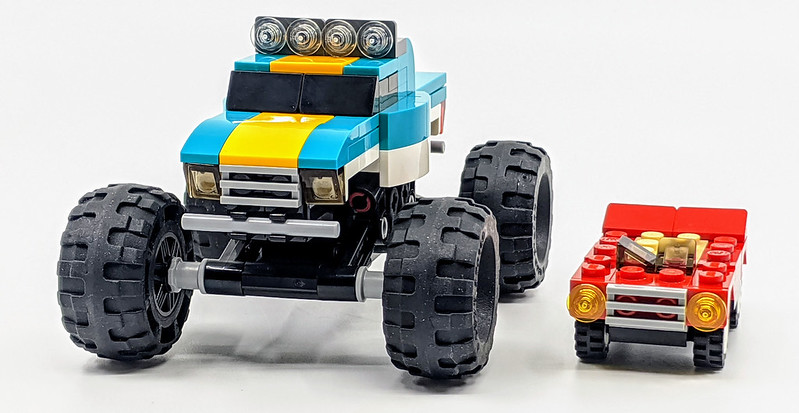 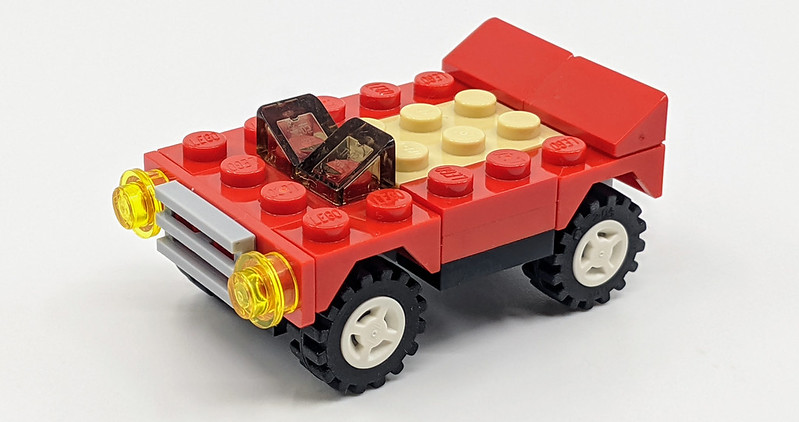 The Monster Truck is a nice little build, in particular the simple suspension used on the four big wheels. Just like the Burger Monster Truck, the bouncy wheels are achieved without the need for metal spring elements or other special pieces. Instead a couple of rubber connectors do more than a decent job. When the two vehicles are combined they look even better, which the flat top crushed car and springy wheels of the Monster Truck allowing for some cool looking action shots. 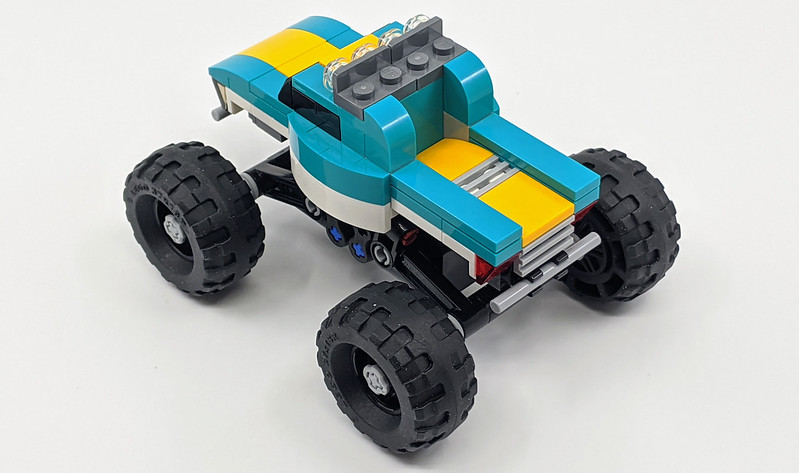 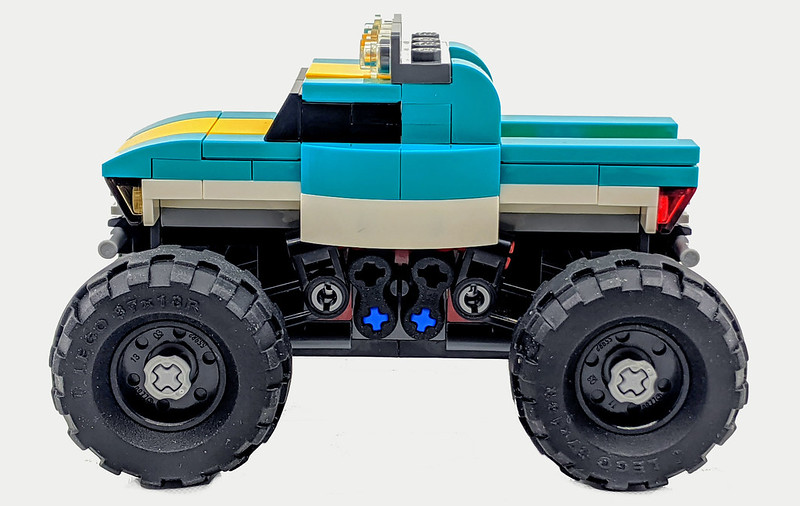 Using many of the same elements used to create the Monster Truck, the set can be rebuilt into a robust Muscle Car, complete with finish line. The Muscle Car is a simple enough build, which looks quite cool. I love the colour scheme, it’s classic Americana, where stunt show type events take place with these vehicles. I also like the shape of the car, with the flat bonnet being complimented by the sloping rear. The finish line is OK but suffers from the feeling that it been created just to use up a few more elements. 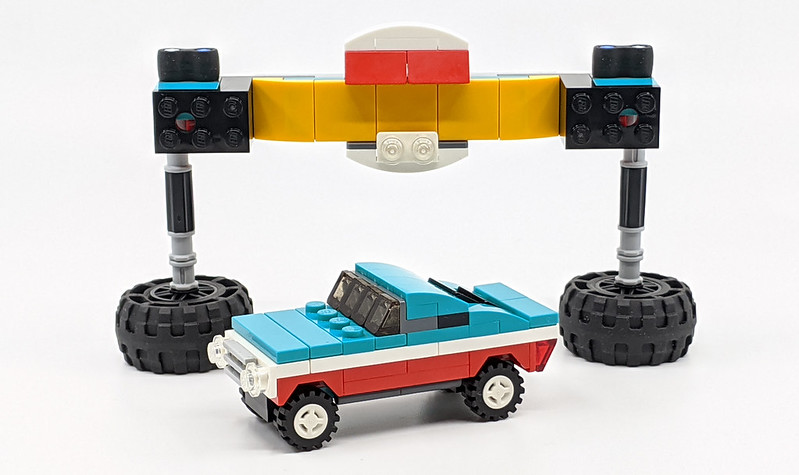 The final model is another race scene classic, a Dragster racing. Again this is a simple looking build, but the does contain a surprising amount elements. I really like the ‘tongue & groove’ type design along the extended nose of the Dragster. I also like the comically oversized engine, now I say comically as if you compare it to the two clear cheese slopes used for windows, then the engine is massive in comparison. 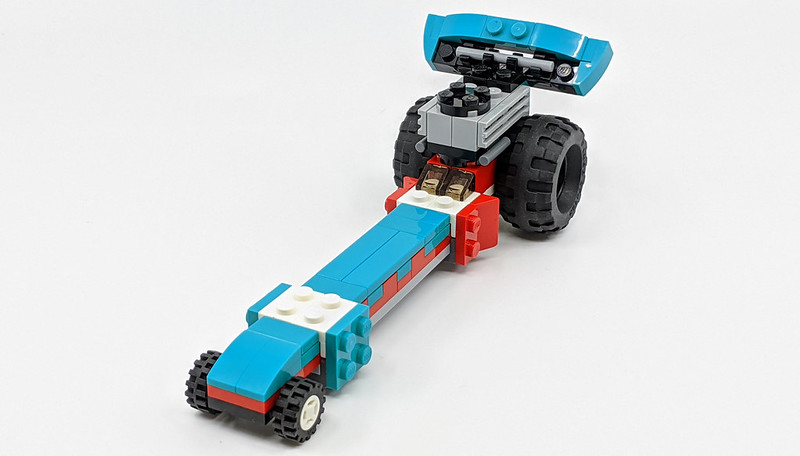 I wouldn’t normally be attracted to sets such as this, I’m a sucker for big builds and sets with Minifigures. So it was refreshing to build a set of this smaller size and have to build it in three different ways. The lead model is the best of the bunch, but I still like the alternate builds. They don’t feel like random creation using bricks intended for the lead build. It’s only the finish line which is a little iffy, the actual alternate vehicles look great.