Over the last 10 years LEGO® Ideas has given LEGO fans a unique way to share their creations and an array of varied sets to build. But this year has seen the theme really come into its own thanks to some rather interesting builds. But can the latest LEGO Ideas release continue with the themes impressive run? I won’t beat around the bush – hell yeah. Just like the Treehouse, the original Dinosaur Fossils Skeleton project passed me by somewhat. It seemed a little similar to the Research Institute. So I was intrigued to see what the actual set would be and boy was I surprised. There’s no need to grab a trowel and brush, or head to the Badlands of Montana, let’s unearth the LEGO Ideas Dinosaur Fossils set. 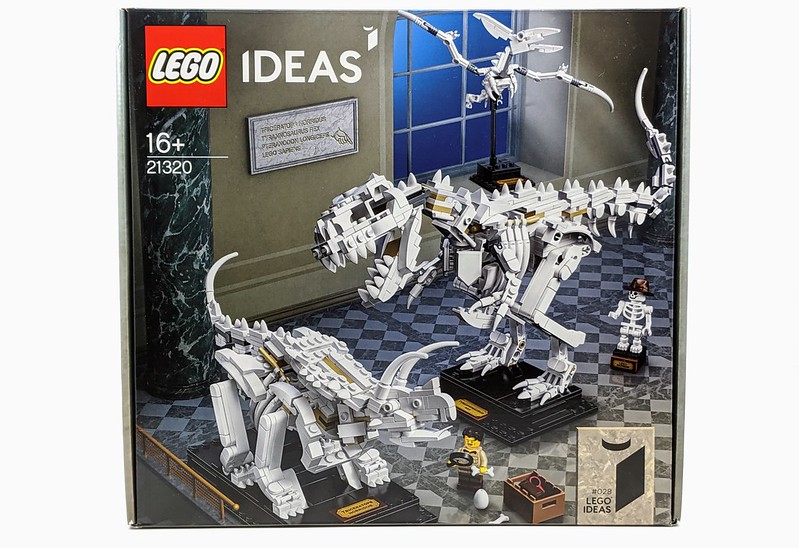 Learn about life on Earth millions of years ago and create a stunning centerpiece with this collectible LEGO® Ideas 21320 Dinosaur Fossils toy building kit for adults. This 910-piece set offers an immersive, creative building experience for natural history enthusiasts who will appreciate the authentic details of the 2 dinosaur skeleton models (Tyrannosaurus rex and Triceratops) and the pterosaur reptile (Pteranodon) skeleton toy. The models are built to 1:32 scale, can be adjusted into lifelike poses and each one comes with its own stand so they can be placed alongside the included sapiens skeleton figure for a museum-style display. To complete the set, there’s also a paleontologist toy minifigure with various accessories for imaginative role-play fun. All in all, this archaeology toy makes a great dinosaur gift for adults to build solo or to share their passion for natural history with family and friends.

The original LEGO Ideas project was submitted by French LEGO fan Jonathan Brunn known as Mukkinn. By day he works in a creative agency and in his spare time he dabbles with building LEGO. The project submitted to LEGO Ideas featured more dinosaurs and they were a little more basic. You can learn more about Jonathan’s story and inspiration about creating the set in the instructions booklet. Which also features a little backstory about the LEGO Designer who helped to turn the initial project concept into the final set. Plus some facts about the real dinosaurs. 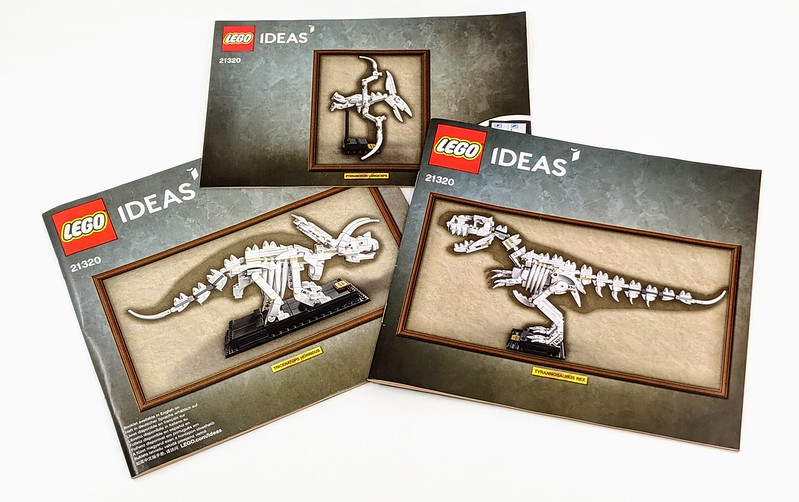 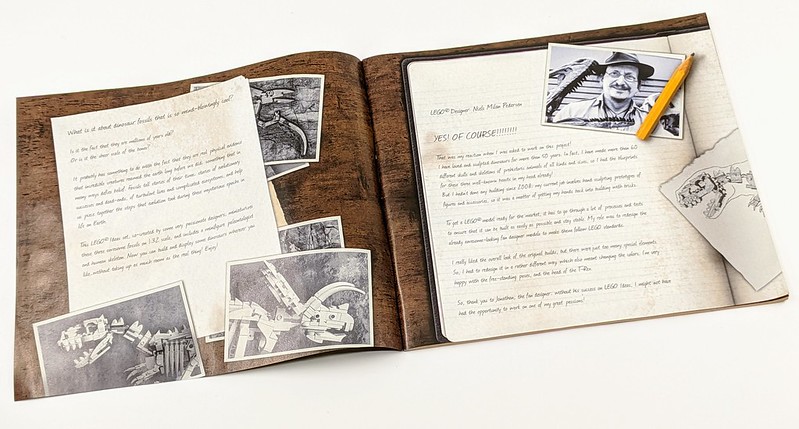 As mentioned above the original project featured five dinosaur skeletons, with a couple more added over the course of the projects support gathering period. The final set trims the line-up down to three dinosaurs and adds a Minifigure and a ‘human’ skeleton. Which is where the build begins. The skeleton is a classic LEGO one humorously dubbed ‘LEGO Sapiens’ and sports an adventurer’s hat. It’s a fun addition to the set and something you’ll find in a museum, maybe minus the hat. 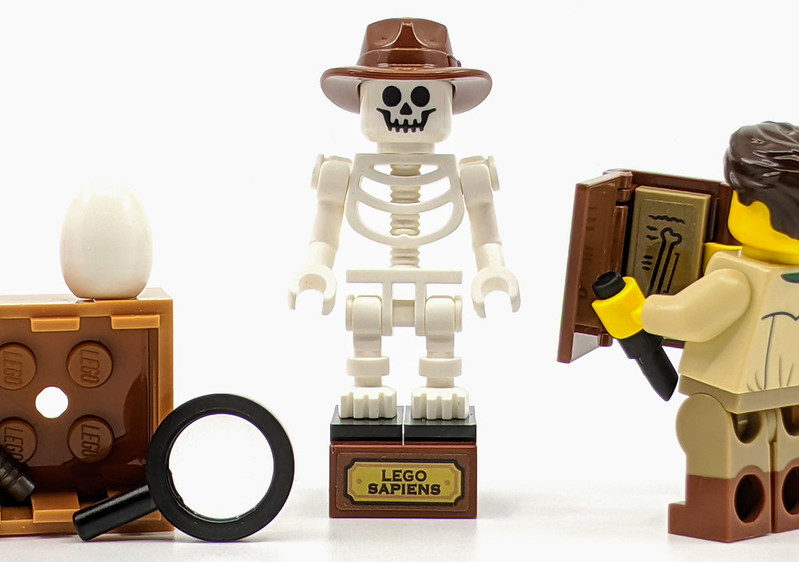 There is also a Minifigure fossil curator included, who also wasn’t part of the original project. He comes with a chest of tools, an egg and of course a couple of bones. I like his outfit, it’s what you’d imagine an paleontologist wearing and the dual-moulded legs work perfectly for his boots. But the main focus of the set is of course those dinosaur skeletons. The set features three dinosaur, only one of which was included in the initial Ideas project. So the final set adds the Pteranodon and Tyrannosaurus rex. This offers a spread of different builds, which all look uniquely different from each other. 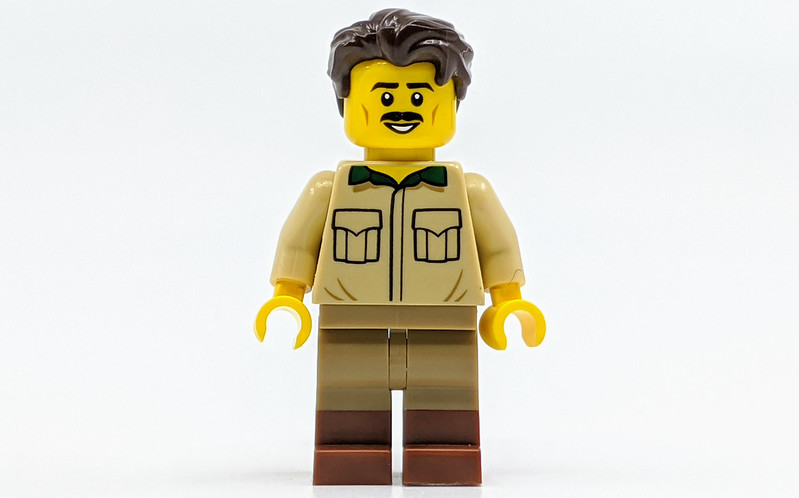 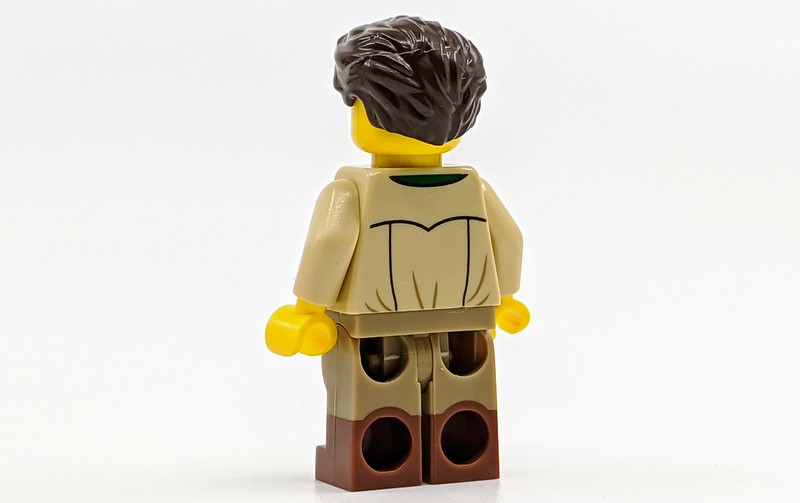 The first of the skeletons you build is the flying terror know as the Pteranodon. This is one of only a few flying creatures for the prehistoric eras. In order to be able to take flight, the Pteranodon is a fairly small creature. This means the skeleton is quite compact and a simple build to ease you into the set. The wing bones are connected via a couple of Technic click hinges, so can be adjusted to offer up different poses. The skull can also be moved. The skeleton is mounted atop a rod, which is anchored within a small black display plinth. Surprisingly despite the small footprint this has, it perfectly holds up the skeleton of the Pteranodon. I expected the need to pose the skeleton in such a way, as to balance the weigh, but you don’t have to. Although only a small build, with a limited set of elements used, it’s nicely detailed and looks like the creature, which has inspired it. 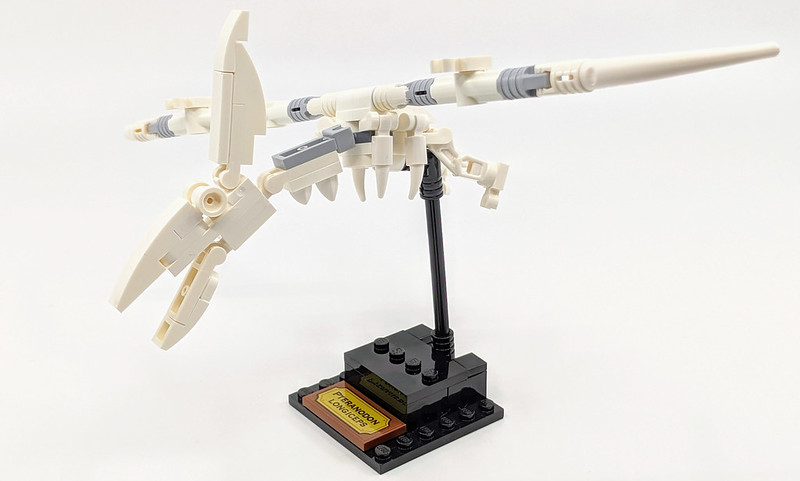 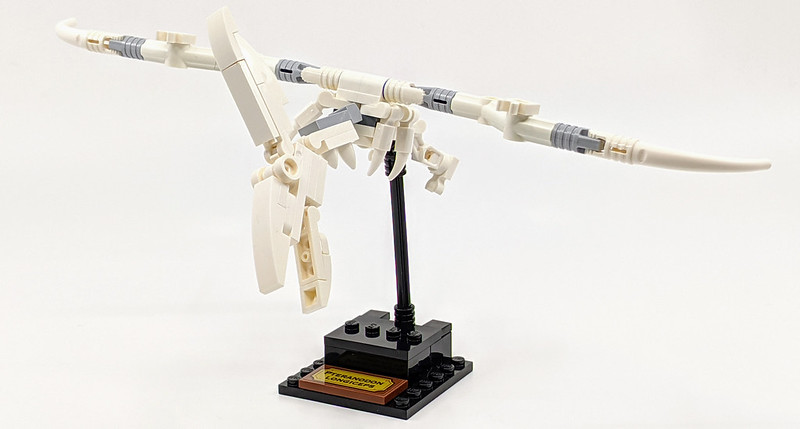 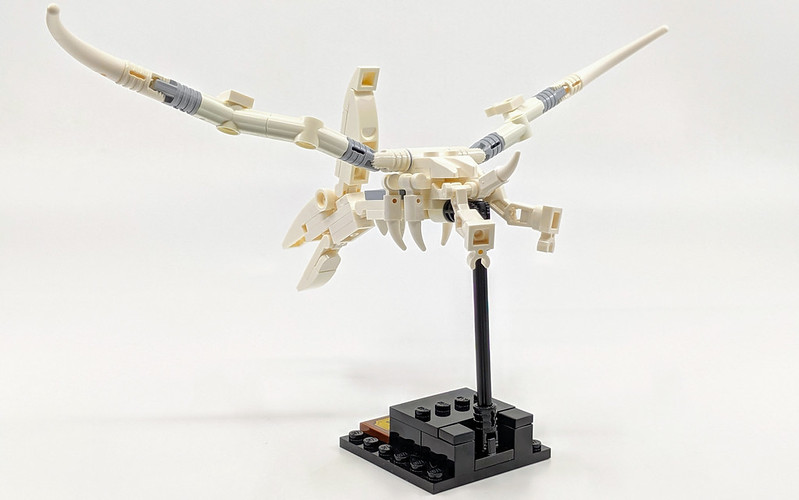 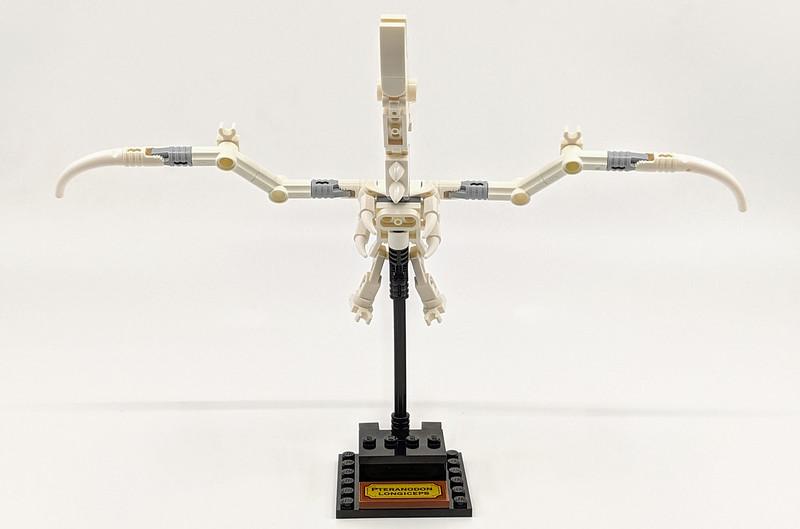 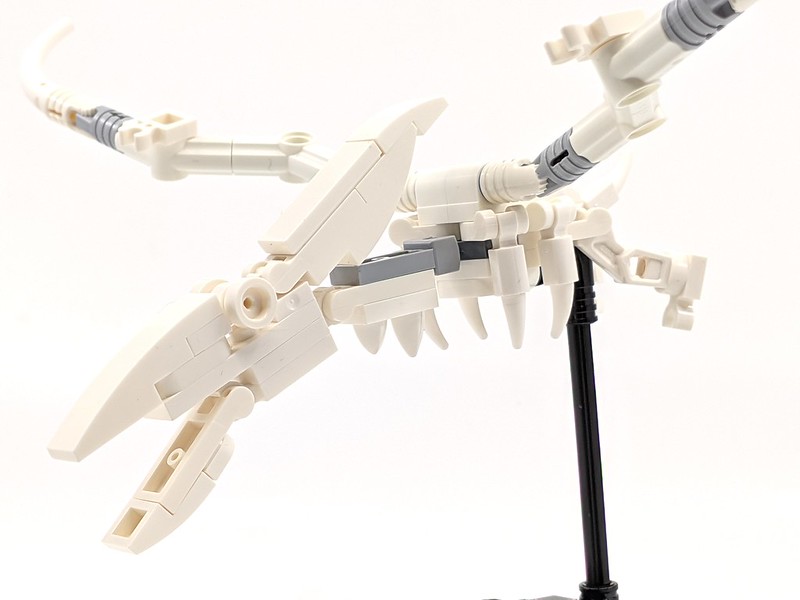 For LEGO fans of a certain age, such as myself, you may have been at just the right age to appreciate the wonder of the Jurassic Park films. I can certainly credit them with much of my fascination with dinosaurs. One of the first dinosaurs we got to truly experience up close in the 90s classic was the Triceratops. These normally docile creatures are instantly recognisable by their trio of horns and large armour-like head fin. The LEGO skeleton does a great job of capturing this iconic appearance. You begin with the base section, which cleverly hides a series of Technic beams to form the basis of the Triceratops frame. Black plates and flat tiles hide all of these and provide a sleek looking base for the skeleton to sit atop. By creating this anchor point within the display plinth, the model is very sturdy. 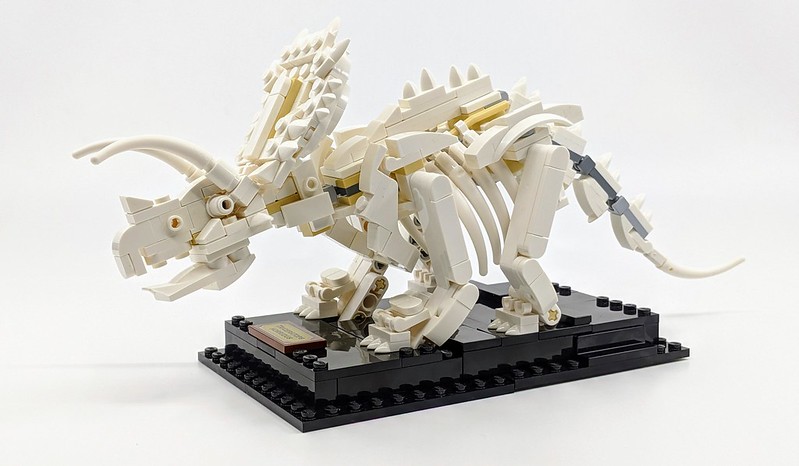 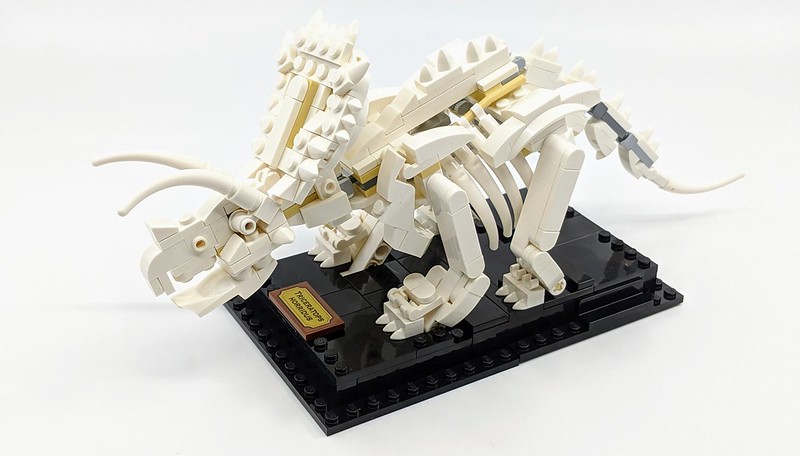 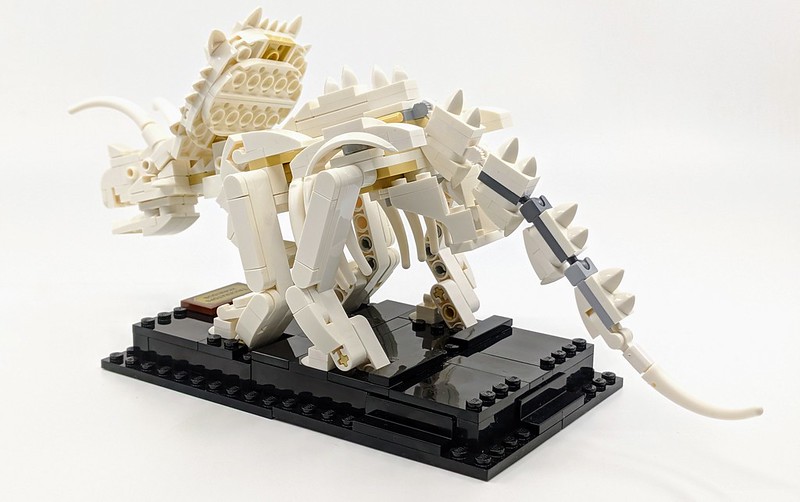 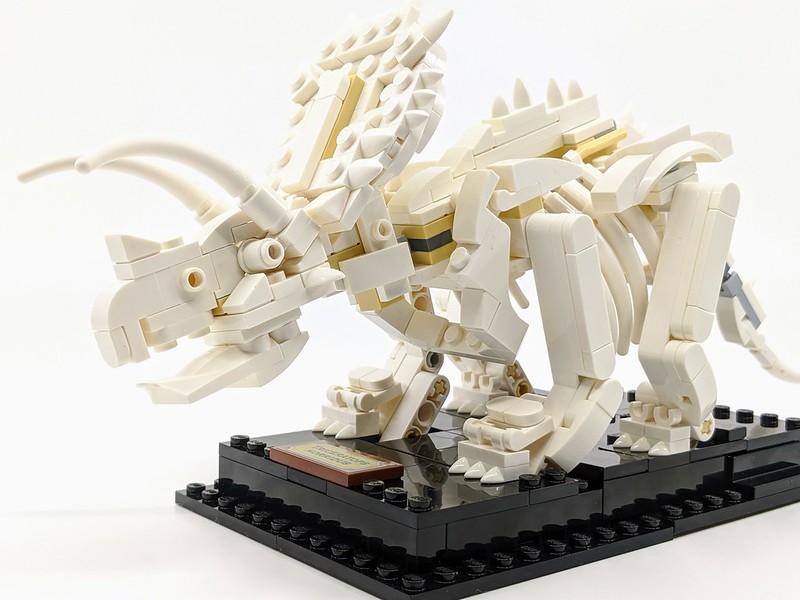 The actual skeleton is lovely build, with a robust body and slightly different sized legs, to give the Triceratops its sloping pose. The head section features almost as many bricks as the body does. The use of elements to recreate the various bones are very impressive. Although there are a few usual connections, everything stays together quite well. In fact the only weak point I found were the arches over the hind legs, you’ll naturally pick the set up here, but due to their connection points, they will easily pop off. The Triceratops can be posed a little thanks to a ball joint connection on the head and a across various sections of the tail. 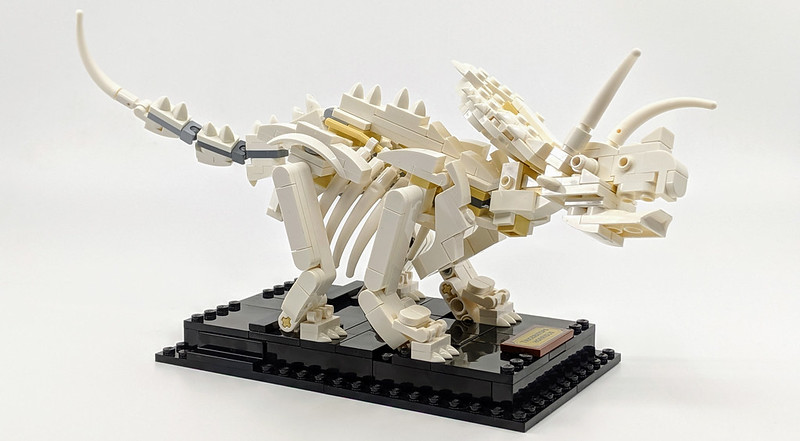 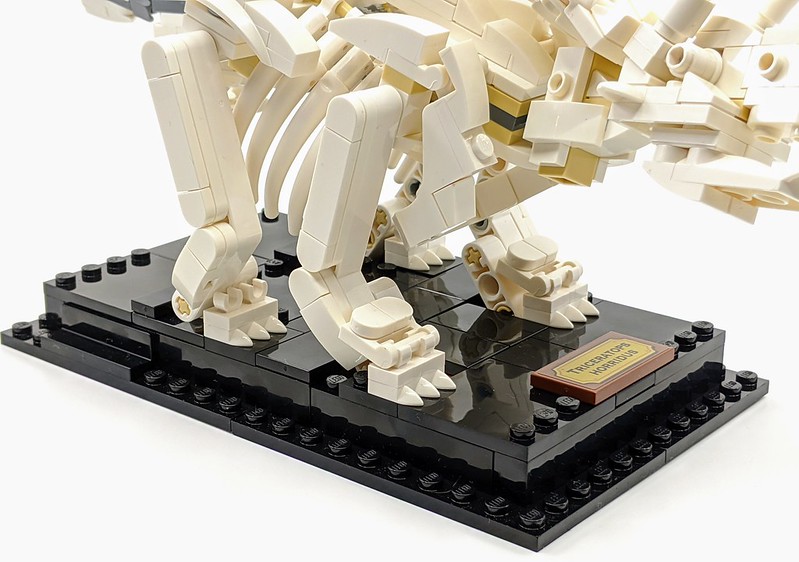 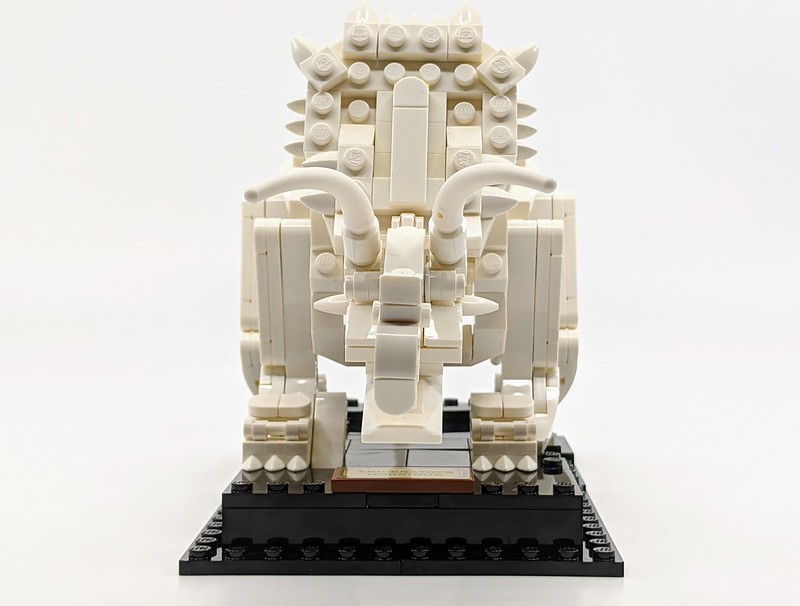 Thanks to pop culture media like Jurassic Park and its recent Jurassic World sequels, the T. rex is probably one of the most iconic dinosaurs included in the set, it’s also the largest of the three main skeletons. The same impressive base as the Triceratops is used to build the T. rex upon. The way this is done is very clever, especially as the toes aren’t actually connected to the leg bones, instead they are mounted on the actual base. The body of the skeleton is built around a tan coloured and awesomely named ‘Thill For Gig’ elements or the piece often used for horse and cart builds. At first I thought this was a little off putting, but I actually like the oddly coloureds elements dotted about each of the builds. It gives them a more authentic look, museums would need to use material other than bones to hold a skeleton together. You’ll notice this more so in the tail section as various Technic click hinges are used to connect together each section of tail bone. 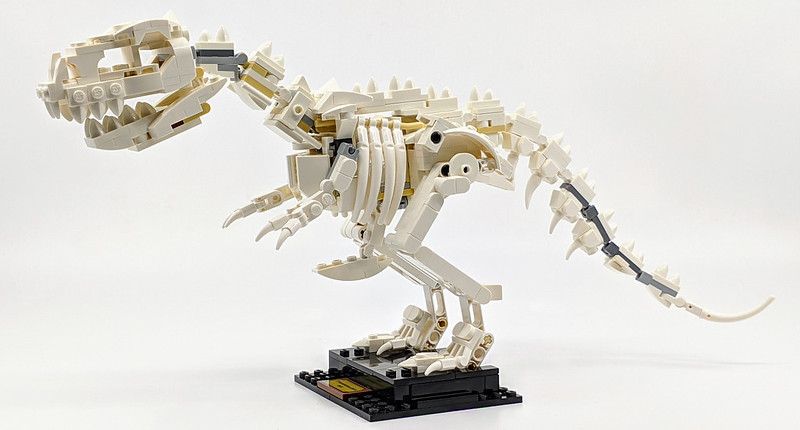 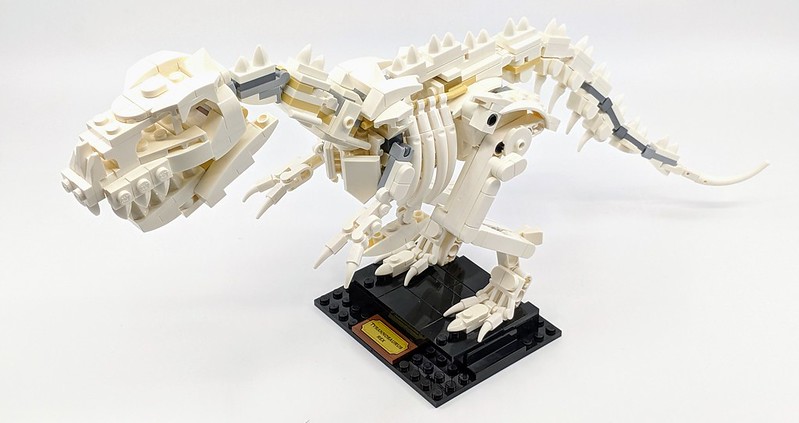 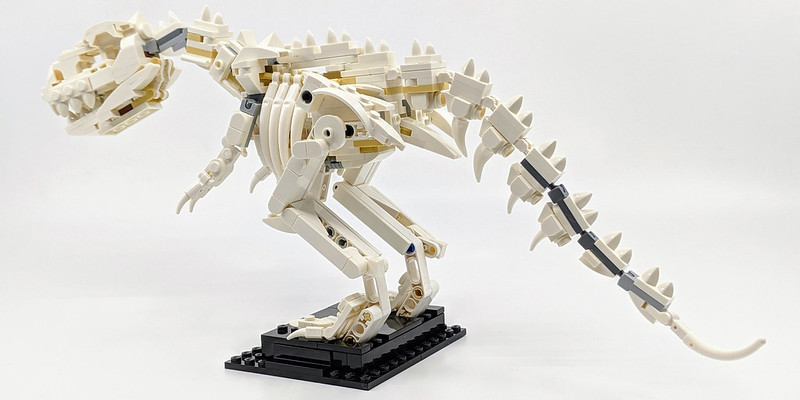 One of my favourite parts of the T. rex is the found at the front. The head looks great and thanks to a hinged jaw and ball jointed neck, you can get some cool poses going. I also like the tiny arms and the two white NEXO shields, these do appear in some strange places. Beneath the chest area is a odd pointing out bone, I’m not sure what it is, but it looks a little out of place. It feels as if it should be pushed somewhere but not according to the instructions. Of the three dinosaur skeletons, the T. rex is the most impressive looking. It looks amazing on its own and even better next to the rest of the builds. 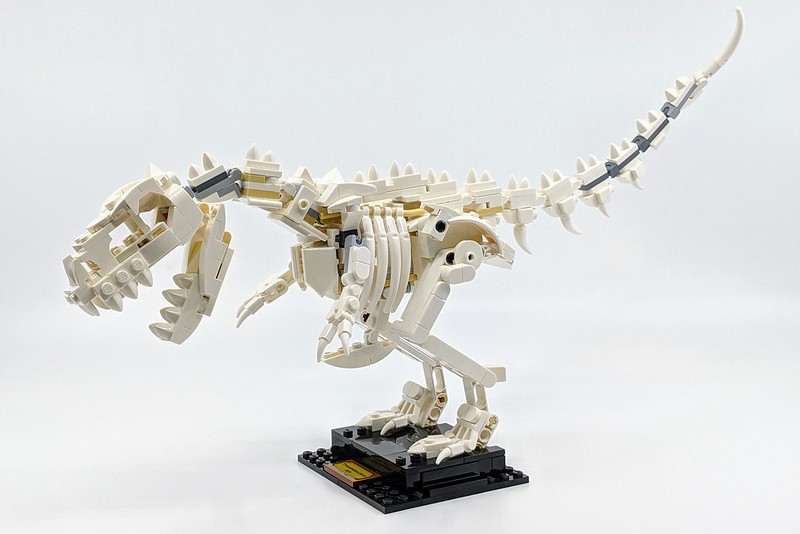 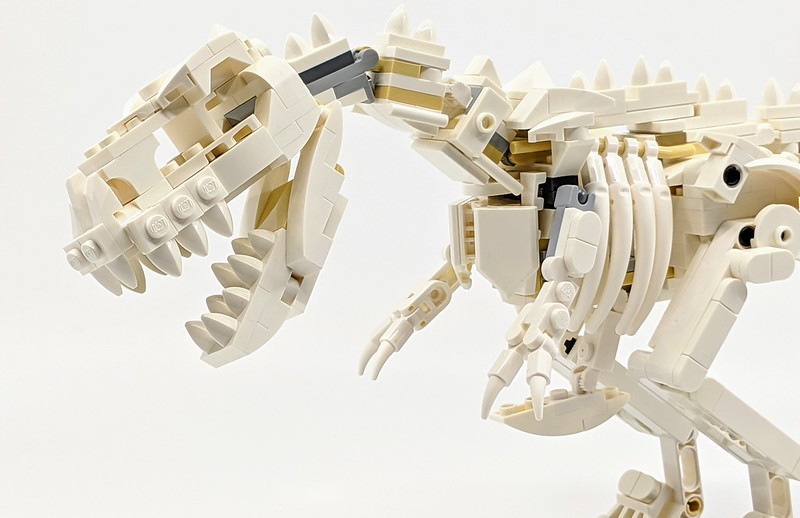 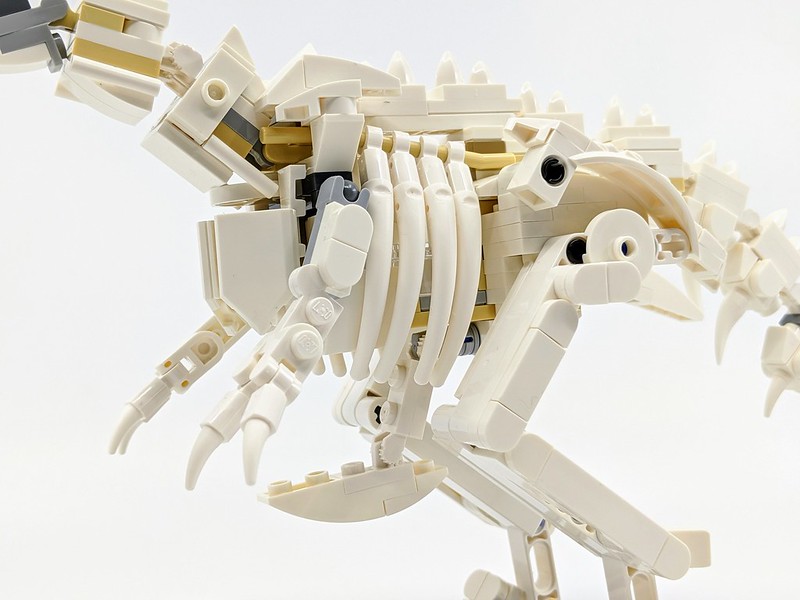 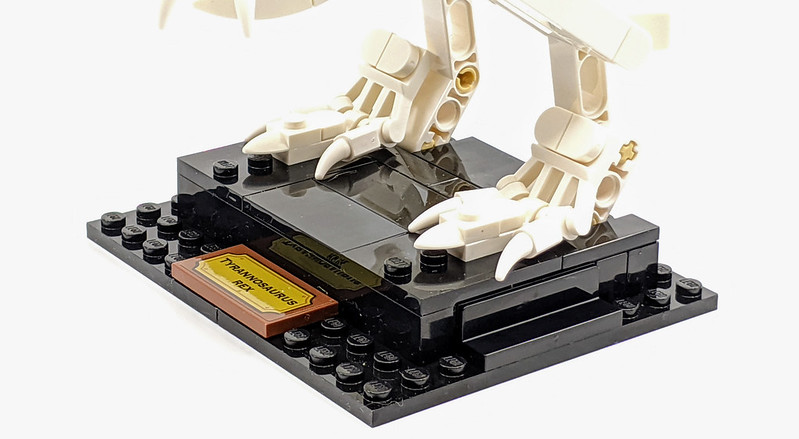 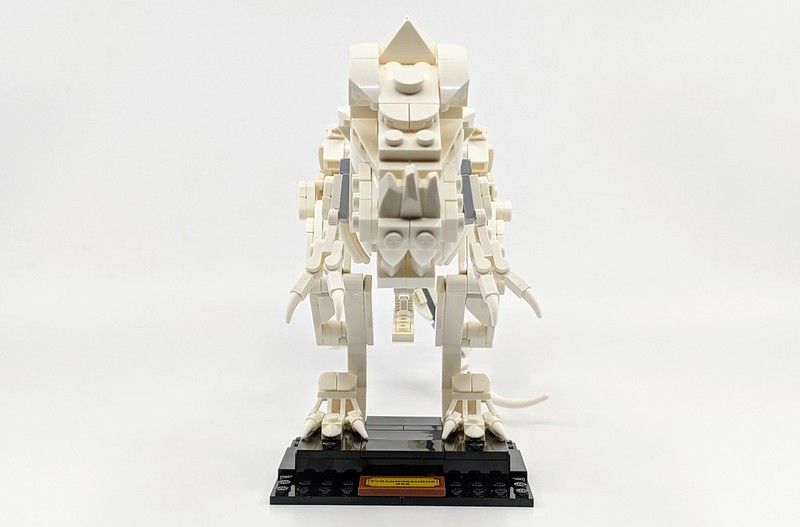 I wasn’t expected much from this set, it’s basically a mass of white elements and often stuff with bones in, can be a bit of a ‘clipfest’, with less building. So I have been pleasantly surprised by the set, it looks great, making it a great display piece and there is actually a decent amount of building across the set. As mentioned above there are certain elements which only come in select coloured and in many sets they stick out like a sore thumb, yet here they fit perfectly with the visuals of a museum displayed dinosaur. They are a decent size as well, to compare I’ve placed them against the Jurassic World dinosaurs below. The original project was a good enough starting point, but the LEGO Ideas Design Team have done an amazing job of turning that initial concept into the final set. LEGO Ideas is fast becoming my favourite theme, it offers so much variety. As fun as the licensed sets are, it sets like this one, which really showcase what can be done with LEGO elements.